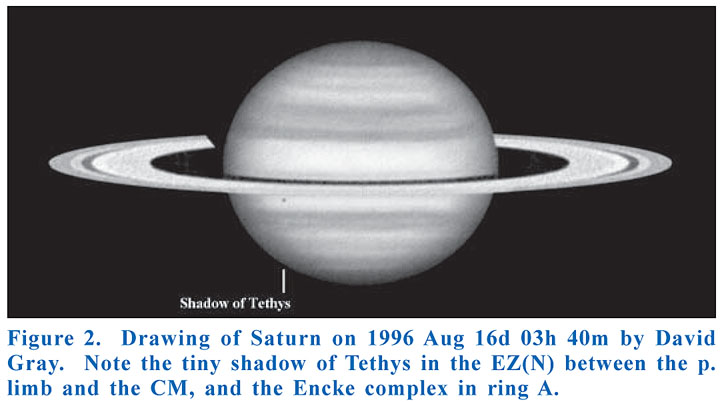 BAA observations during the 1996-’97 apparition are reviewed. The planet’s northern Equatorial Zone (EZ) had become quiescent late in 1995, and after the apparition reviewed here would be covered by the shadow of the rings. However, renewed white spot activity was apparent in the southern half of the EZ, and several relatively slow-moving spots were tracked, exhibiting the general slow current witnessed in the EZ since 1994-’95. The S. component of the Equatorial Band was wide and dark over long stretches, a development for which no historical precedent appears to exist. Dark spots were observed in the SEB, particularly in its S. component, but the NEB was inactive. Definite changes in belt latitudes had occurred since the previous opposition, particularly in the S. hemisphere, with a general poleward movement, which caused the STB to again be close to its historical average location. The rings were obliquely open upon the south face. The longstanding bicoloured ring observational programme continued, and two observers independently found that the p. ansa was brighter than the f. one on 1996 Sep 5. Shadow transits of Dione and Tethys were observed visually, and the transit of Tethys on 1996 Oct 30 was captured by a CCD camera.

(Login or click above to see the full illustrated article in PDF format).