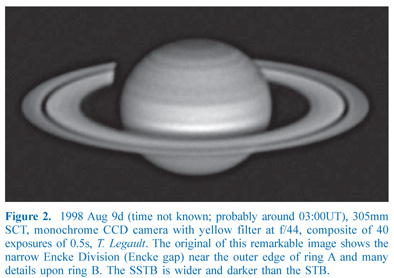 The position of Saturn in the sky continued to improve for northern observers, the planet’s declination reaching +9° at opposition on 1998 Oct 23. The rings were then open at an angle of 15° upon the S. face. Solar conjunctions were on 1998 Apr 13 and 1999 Apr 27, and BAA observers (Table 1) were able to monitor the period 1998 Jun 29 (Gray) to 1999 Mar 18 (Beaumont).
Good CCD images were made by several observers, of which the best came from Thierry Legault in France. Isao Miyazaki unfortunately did not take images of Saturn in 1998-’99. Youdale photographed the planet. The intensity estimates programme (Table 2) was well-supported, and colour filter intensity data contributed by Ed Crandall and Robert Steele. David Gray timed 172 Central Meridian transits of features on 44 dates which enabled the determination of drift-rates for numerous atmospheric currents. Gray also made intensity estimates on 86 dates. At this time, visual data were still to be preferred for the judgement of colour. However, the apparition marked the point at which images had improved to such an extent as to become more useful than drawings as the most reliable and convenient record of belt latitudes. We continue to show latitude measurements from drawings as well as images in this report (Table 3): their good accord again demonstrates the reliability of visual data.
This report continues from that for 1997-’98; published accounts by the ALPO and UAI are also available. During the apparition a BAA Circular was issued, and a short description given in a Council Report.  A colour image by Terry Platt was published on the front cover of the Journal. The online database of observations maintained by the ALPO Japan (JALPON) was becoming a very useful source of information from around this time, though it did not yet include contributions from outside the Far East.