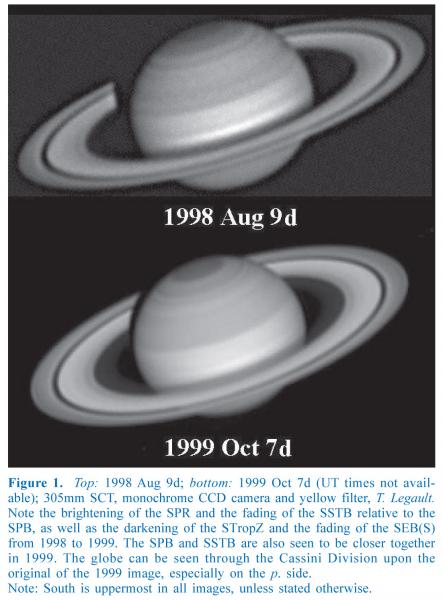 Excellent views were enjoyed of Saturn’s nearly fully open rings, while the planet’s atmosphere was less active than in the preceding apparition. In comparison to 1998-’99, the dusky SPR surrounding the dark SPC seemed much lighter. The STropZ was darker and the SEB(S) less intense before opposition. These variations led to reduced contrast in the region between the SPC and the SEB(N). Interest was enhanced by the presence of differently coloured belts and zones at high southern latitudes. Transient white ovals were seen in the STeZ and EZ(S), with some dark spots upon the N. edge of the SEB: the mean drift rate of two EZ(S) white spots at +11°/day with respect to System I demonstrated the continuing presence of the slow equatorial current that had been evident since 1994.
From 1975-’76 up to the current apparition there was a complete presentation of the northern hemisphere towards the Earth and Sun.  Appendix I summarises BAA latitude measurements for the belts of that hemisphere over the entire period. Marked seasonal trends in latitude are exhibited by the major belts, with a tendency for them to increase in latitude with increasing altitude of the Sun.