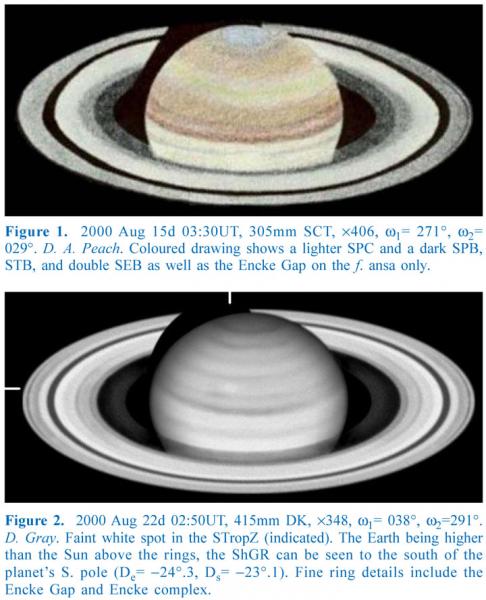 In 2000-2001 Saturn was extremely well-placed for observers at north temperate latitudes, coming to opposition on 2000 Nov 19, when its declination was +17°. The saturnicentric latitude of the sub-Earth point reached -23.6° at opposition, so that the N. limb of the planet was completely hidden by the rings. Limiting solar conjunctions occurred on 2000 May 10 and 2001 May 25, and our observers (Table 1) covered the period from 2000 Jul 8 (Ikemura) to 2001 Apr 9 (Dal Prete).

Numerous belts and zones were revealed upon the images obtained even with medium-sized instruments, but atmospheric activity was at a minimum (Figures 1-11). Images taken with a 65cm Cassegrain by Akutsu showed no obvious spots, and Gray could time only ten CM (Central Meridian) transits with his 41cm Dall-Kirkham during 57 observing sessions. The visual photometry programme (Table 2) continued, while both visual and imaging data were again used to derive average saturnicentric belt latitudes (Table 3). In addition to visible waveband work, infrared and methane band images were submitted (Figure 7). Akutsu also submitted an ultraviolet image.

This report continues the narrative from 1999-2000.  A short description was published at the time by David Graham.  The ALPO and UAI also produced reports for 2000-’01. Schmude carried out photoelectric photometry. A growing number of observers were posting images upon their personal web pages; the existing ALPO Japan (JALPON) website began to include the work of several international observers, while the year 2001 also saw the creation of the International Outer Planets Watch website, which hosts images of Saturn and the other gas giants. The HST secured a small number of images. The Cassini spacecraft remained in transit to the ringed planet.