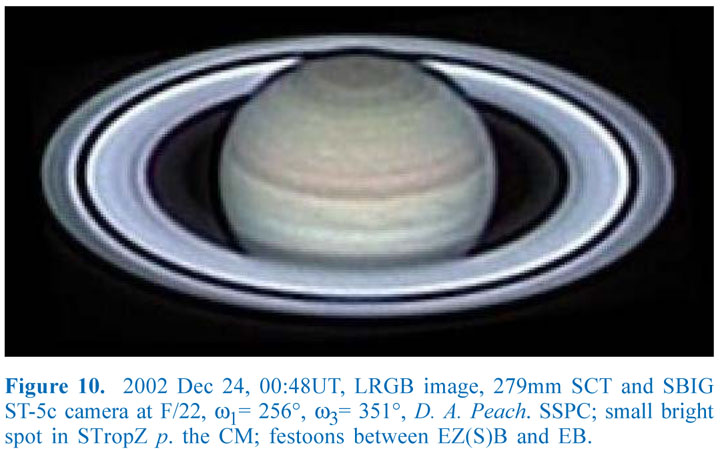 Saturn was at opposition on 2002 Dec 17, when the sub-Earth latitude (De) was -26.6°. During the apparition De attained its maximum figure of -26.7° for this presentation of the south face of the rings. Solar conjunctions took place on 2002 Jun 9 and 2003 Jun 24, while perihelion would be reached between this apparition and the next, on 2003 Jul 26. The planet was high in Northern hemisphere skies, with a declination of +22° at opposition. Data covered the period 2002 Aug 17 (Foulkes) to 2003 May 3 (Niechoy).
The Cassini spacecraft was still en route for Saturn. David Graham and Damian Peach wrote a useful Interim Report, ‘Spots on Saturn in visual wavelengths’, while a short note also appeared in the Council report. Images such as those in Figure 1 were secured by the Hubble Space Telescope (HST).
Newly available software enabled the rapid stacking and enhancement of images, resulting in an increase in quality of the results submitted, and in the number of contributors: see Table 1 for a list. The ‘webcam revolution’ has been described elsewhere. Several animated images were also received, which demonstrated the objective reality of small details that rotated with the planet. Peach made use of a long sojourn on Tenerife to secure a large number of exquisite images. A few new visual observers contributed for the first time.
A 2002-’03 report by the Association of Lunar and Planetary Observers (ALPO, USA) was published. Online archives of images were maintained by ALPO Japan (JALPON) and the International Outer Planets Watch. No report was published by the Unione Astrofili Italiane (UAI), but its online Saturn archive begins with the 2002-’03 apparition.
The present report continues the narrative from 2001-’02. Up to the previous opposition we used System I (844.3°/day) and II (812.0°/day) longitudes for equatorial and non-equatorial features, respectively. For comparison with present-day reports we now replace System II by System III (810.8°/day, or 10h 39m 22s), as explained in the BAA Handbook… (continued)
(Login or click above to view the full illustrated article in PDF format)