This report describes the observations of Saturn made by Saturn Section members during the 2008/2009 apparition. During this apparition, the rings were edge-on to the Sun and Earth on 2009 Aug 11 and Sep 4 respectively. The former event was difficult and the latter impossible to observe from the Earth as both occurred close to solar conjunction on Sep 17. During the apparition both major belts were visible and observations showed that the North Equatorial Belt (NEB) had a noticeable blue colour compared to the warm colour of the South Equatorial Belt. A number of storms were observed during this apparition and four of these were reliably followed. Evidence is also presented that shows that one SEBZ storm had lasted over at least three apparitions. Observations of a number of satellite and shadow transits and Titan eclipses will be presented in Part II of the paper.

Introduction
After solar conjunction on 2008 Sep 4 at 02h UT, Saturn reached its first stationary point on 2009 Jan 1 at 20h UT. Opposition occurred on 2009 Mar 8 at 20h UT in the constellation of Leo, just to the north of the star Sigma Leonis. At opposition, Saturn’s apparent magnitude was +0.5, its apparent equatorial diameter was 19″.8 and the apparent major axis of the rings was 44″.9.
The planet reached its second stationary point on 2009 May 17 at 19h UT and was in conjunction with the Sun again on 2009 Sept 17 at 18h UT. The variation of the apparent inclination of its pole and rings with respect to both the Earth and the Sun during this apparition is shown in Figure 1.
The ring inclination with respect to the Earth reached a minimum of just less than -0.8° at the end of Dec. This gave the best opportunity for observers to see the rings when very narrow. At opposition the ring inclination with respect to the Earth was -2.6°.
The inclination reached a maximum of approximately -4.15° in mid-May before decreasing again to the edge-on phase. The rings were edge-on to the Sun on Aug 11 and edge-on to the Earth on Sep 4. 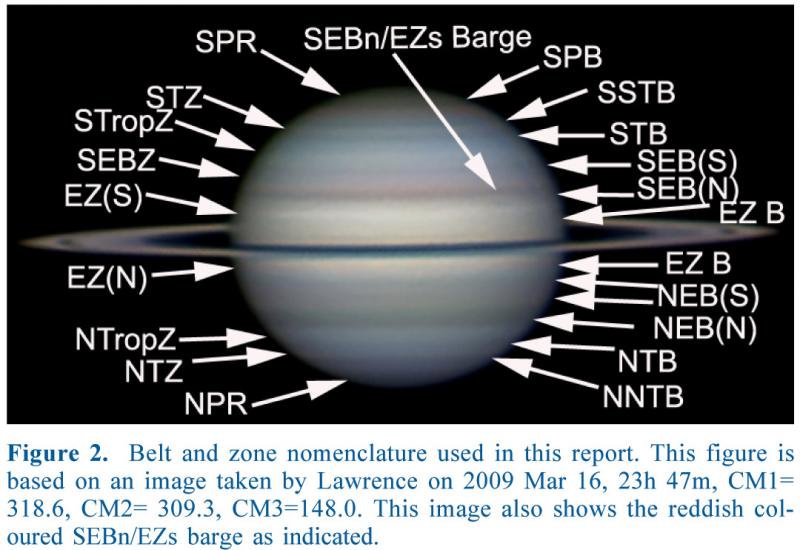 Those who contributed visual observations and those who contributed digital observations are listed in Tables 1 and 2 respectively.
The first observation of the apparition was made on 2008 Oct 18 (Maxson) and the final observation was made on 2009 Aug 14 (Akutsu). As in previous apparitions, a wide range of apertures and telescope types was used. Many instruments were in excess of 300mm. Schmidt-Cassegrain telescopes were again popular amongst those who took images. Although medium to large apertures were mainly used for imaging, Meadows was able to image the major features using a 105mm aperture Maksutov. Hill was also able to image the major features plus Titan’s shadow in transit (see Part II). The author was also able to use the Faulkes remote telescope on Hawaii (Figure 20).
Most images were taken using webcams or high speed USB 2.0 cameras by Lumenera or DMK. However Bailey experimented with imaging the planet using a DXLeica8 fixed lens camera with eyepiece projection. The major features were recorded both with single frames and stacked frames.
The WinJUPOS software was again used to derive spot longitudes, average spot drifts and belt latitudes. These positions plus visual central meridian transits are stored in a WinJUPOS database which has been created for Saturn Section observations.

Nomenclature and terminology
The belt/zone nomenclature used in this report is shown in Figure 2. This report also uses the abbreviations and terminology used in recent apparition reports. All drawings and images shown in this report are oriented with south upwards and with the preceding (p.) edge to the left except for Figure 28 in Part II. This is the orientation seen in an inverting telescope from the northern hemisphere. Planetographic latitudes are used unless otherwise stated. (continued…)