In the west, the autumn groups of Pegasus, Pisces and Cetus are now approaching the horizon although the Great Spiral, M31 in Andromeda, is still at an altitude of almost 50°. The open cluster NGC 752 lays a little further along the line of stars that forms Andromeda, whilst M33 is just across the border in neighbouring Triangulum. Between the aptly named Triangle and the zenith we find Perseus riding high with the ‘Demon Star’ Algol just 20° from the overhead point. More correctly known as Beta Persei, it is one of the best known eclipsing binaries and varies in magnitude from +2.1 to +3.4.

Looking north, the head of circumpolar Draco the dragon and Ursa Minor are almost at their closest to the horizon. It follows then that Ursa Major is to the east of the meridian and rising whilst on the other side of the north celestial pole Cepheus, which lies partly in the galactic plane, is sinking. At this time of year the arc of the Milky Way rises from just west of north and makes its way via Cygnus, Cepheus and Cassiopeia to the zenith. The whole area is rich with clusters like the Dragonfly and Sailboat as well as nebulae such as the Cocoon and the Heart and Soul. Vega lies just a few degrees from the horizon and will soon be lost, together with Altair that has already set. Deneb in Cygnus, the third member of the Summer Triangle, will not suffer the same fate; at least not from southern England, as from there it is circumpolar. 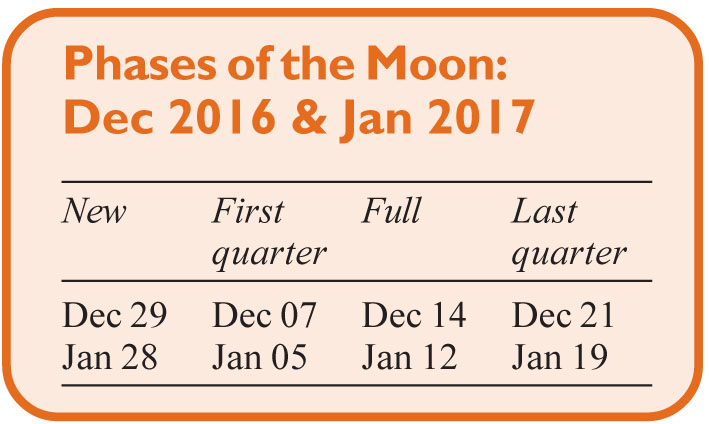 Towards the east Leo and Cancer have both risen, as has the head of Hydra, which belongs to the largest constellation by area of the 88 modern groups. Immediately above Leo at this time are the generally faint and shapeless forms of Leo Minor and Lynx, which were both added to the sky in the 17th century by Hevelius. They both contain a small number of faint galaxies but Leo Minor’s claim to fame is that it contains the interestingly named ‘Hanny’s Voorwerp’, which translates to Hanny’s Object. Hanny is a Dutch schoolteacher and found this unusual specimen whilst volunteering on ‘Galaxy Zoo’. The object is described as being a ‘quasar ionisation echo’, which glows green due to the ionisation of oxygen.

In the south the winter constellations are coming to dominate the area as Orion and his retinue have all now risen. At just 6° from the zenith, Capella in Auriga is approaching the meridian whilst below it Aldebaran has just transited. South of these, Orion and Lepus are yet to culminate as is the rest of Orion’s entourage which lies mostly to his east.

Mercury begins the period as an evening object, reaching greatest eastern elongation (21°) on December 11. Even then it is very poorly placed for observers in the UK, being just 4° in elevation at the end of civil twilight. The planet is several degrees below the ecliptic, but more importantly it lies 25° below the celestial equator making it a very difficult object. The smallest planet then moves back into the clutches of the Sun and reaches inferior conjunction on Dec 28. It emerges into the morning skies with a marginally improved declination although when it reaches greatest western elongation (24°) on January 19 it is still only 6° above the south eastern horizon, with a magnitude of -0.2, at the beginning of civil twilight.

Venus is a brilliant evening object, at an altitude of almost 15°, in the south-south-west at sunset at the start of December. It too suffers from the problem of negative declination although in the case of Venus, things are improving from -23° at the start of the period to just making it into positive numbers at the end. Over that time-frame the planet’s brightness will have risen from -4.1 to a beacon-like -4.6 and it will set more than four hours after the Sun. It reaches greatest eastern elongation (47°) on Jan 12. On both Jan 2 and 31 Venus, Mars and a waxing crescent Moon will provide a pleasing photo opportunity in the south western sky.
Earth reaches perihelion on January 4 when we will be at our closest to our parent star, a little over 147 million kilometres away.

Mars is an evening object that begins the period in Capricornus, although its swift eastwardly motion carries it across the border into neighbouring Aquarius on Dec 15 and then onward in the direction of Pisces which it reaches on Jan 18. In general terms, the red planet sets five hours after the Sun throughout December and January, though despite its fleetness of foot its angular distance from the Sun is decreasing. This will continue to be the case until solar conjunction in July 2017. The planet’s brightness and apparent size both continue to decline. On Jan 1 it is magnitude +0.9 with a diameter of 5.8 arcseconds.

Jupiter is a brilliant morning object rising five hours ahead of the Sun at the beginning of December. By the end of January it is, technically speaking, an evening object as it rises half an hour before midnight. Over that period the gas giant’s brightness has grown from -1.8 to -2.1, and its equatorial diameter from 33 to 39 arcseconds in preparation for a March opposition. Jupiter spends the entire period in question moving direct in Virgo, not far from the bright star Spica.

Saturn is in conjunction with the Sun on Dec 10 and so will not be observable for the first half of the period. Following conjunction it becomes a morning object although it is unlikely to be seen from the UK until later in January, though it is a better prospect from further south. By the end of January the ringed planet rises just before 05:00, nearly three hours ahead of the Sun.

Uranus at magnitude +5.8 is still resident in Pisces and transits due south at 20:30 in early December. By the end of January it will be lost to view before midnight.

Neptune lies to the west of Uranus in Aquarius, transiting considerably earlier at 18:00 at the start of the period and setting by 19:30 at the close. On Jan 1 the planet lies just 20 arcseconds southwest of Mars whilst on January 13 it passes a similar distance southeast of Venus. This should assist in the identification of the ice giant whose magnitude is +7.9.

Pluto is currently in Sagittarius setting soon after the Sun, as it heads towards conjunction in early January.

(1) Ceres spends all of December in Cetus, a little to the south of Uranus, before crossing into neighbouring Pisces in early January.

The Geminids are active from December 8 to 17 with maximum occurring on Dec 13 at 20:00. Unfortunately on that night a full Moon is located nearby in Taurus, meaning that only the brightest events will be visible.

The normal limits of the Ursids are from Dec 17 to 25, reaching maximum during the night of Dec 22/23 when the Moon will not rise until 02:00. Rates of around 10 meteors per hour are expected, although this is a shower that would benefit from more observations.

Activity from the Quadrantids can be expected from Jan 1 to 6 with a peak being reached on Jan 3 at 15:00, so watches should be attempted in both the early hours and evening of Jan 3 plus the morning of Jan 4. Zenithal hourly rates could be in the region of 80, so with a crescent Moon setting by 22:00 watches could be very rewarding if the weather is accommodating.

In the table I’ve listed events for stars of magnitude 7.0 or brighter although there are many others that are either of fainter stars or those whose observation may be marginal due to elevation or other factors. DD= disappearance at the dark limb, whilst RD= reappearance at the dark limb. There is a column headed ‘mm’ to indicate the minimum aperture required for the event. The evening of December 12 through to moonset on the morning of December 13 sees our satellite pass once more through the Hyades cluster, an event that culminates in a low altitude occultation of Aldebaran, seen as a graze from parts of Scotland. Times are for Greenwich and in UT.

There are three events during the months in question, all in the early hours of the morning. Observers are encouraged to attempt these events and submit results, negative as well as positive, to Tim Haymes at tvh.observatory@btinternet.com. More details are available in the current BAA Handbook. 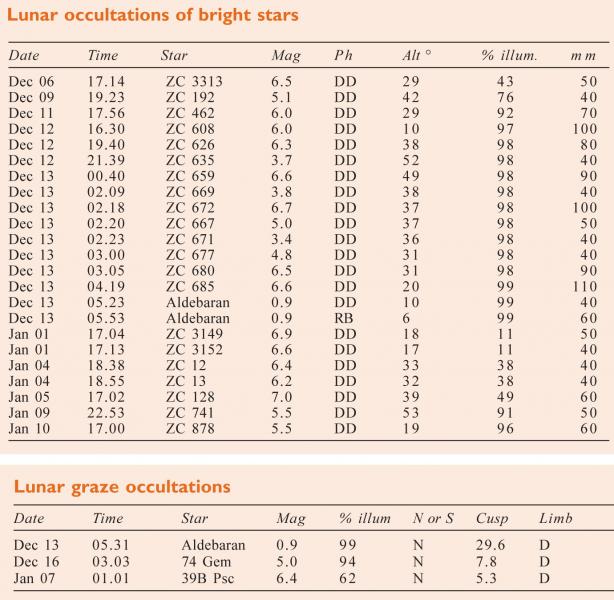