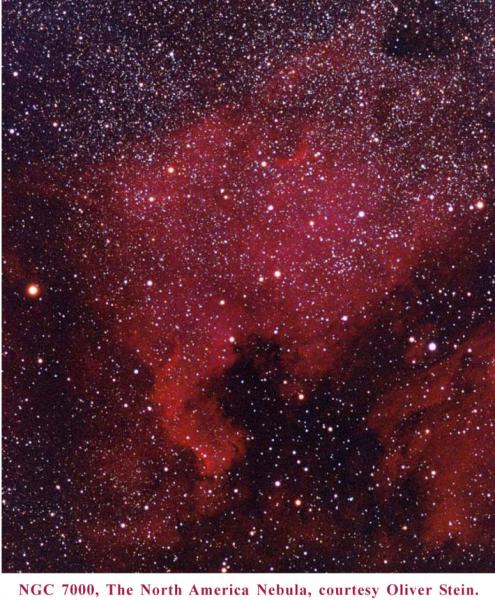 In the west the Summer Triangle, whilst still well placed, is past its  best with Altair now just 17° above the horizon. Brilliant Vega fares a little better as do the lovely planetary nebula M57 (NGC 6720) and beta Lyrae, the much observed eclipsing variable. In this case the two bodies in a spectroscopic binary configuration are in the process of transferring material from the primary to the secondary, which has now become the more massive of the two. By coincidence their plane of rotation is in the Earth’s line of sight so we see the effect of the two eclipsing one another.

Above Altair and Vega lies the third Summer Triangle member, Deneb in Cygnus the Swan, which is often referred to as the Northern Cross. Within its boundaries are the two moderately bright open clusters of M39 at mag 4.6 and NGC 6871, which is a small group of around 50 members with a magnitude of 5.2. Of course Cygnus also contains NGC 7000, that is more commonly known as the North American Nebula, due to an obscuration of dust that resembles the American coast around the Gulf of Mexico.

Looking north Ursa Major is beginning to climb away from the horizon, although its tail still occupies the meridian. That curve of stars pointing south tells us that Arcturus in Boötes and Corona Borealis have sadly already been lost to view, and that Hercules with his globular clusters is not far behind. The zenith currently lies within Cassiopeia with the famous ‘W’ on the meridian north of the Little Bear.

Towards the east the old favourites of winter are once again in evidence to remind us that the pleasures of summer observing are now a distant memory. Taurus, Auriga and Gemini have risen but we have yet to see Orion’s full retinue. Above Auriga we find Perseus, with the photogenic Double Cluster now at an altitude of almost 60°. Also within Perseus is the open cluster M34, which is visible to the naked eye and an ideal candidate for binocular observers. 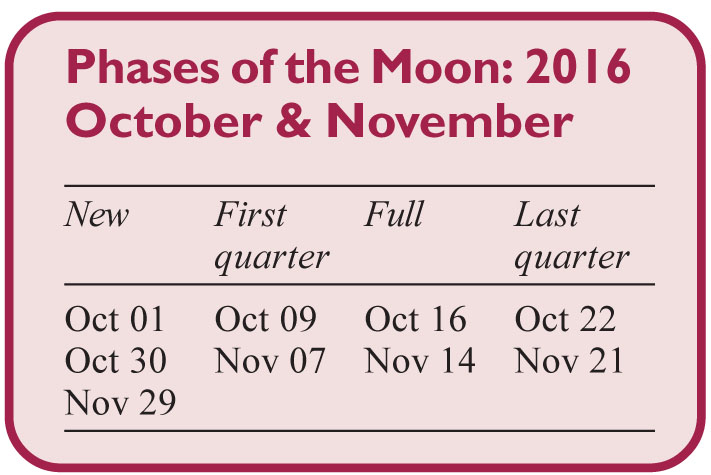 The southern sky is dominated by Pegasus and Andromeda, with M31 on the meridian 80° above the horizon. Below them is Pisces, still playing host to Uranus, and below that the large and generally vague forms of Cetus and Aquarius containing Ceres and Neptune respectively. A line drawn through the two most westerly stars of the Square of Pegasus and continued southwards brings you very close to Fomalhaut, the eighteenth brightest star in the night sky and the brightest star in Pisces Austrinus.

Mercury reached greatest elongation west on September 28 and is still a morning object, rising a little before 05:30 BST at the start of October. The smallest planet moves swiftly back into the clutches of the Sun, brightening as it goes, and passing close to Jupiter on October 11. Mercury then reaches superior conjunction on October 27 after which it moves east of the Sun to become an evening object. It lies a little south of the ecliptic and 25° south of the celestial equator at the end of November which means that it sets just forty minutes after the Sun, making it a difficult object from the UK.

Venus has an elongation of just over 30° at the beginning of October, but despite this it sets less than an hour after the Sun. It also suffers with declinations of up to -25° although things improve gradually from the end of November onwards when it will set almost three hours behind the Sun. One thing in Venus’ favour is that it shines at a beacon-like magnitude of -4.0 and then brightens slightly during the second half of the period. During October and November the planet’s phase shrinks from 85% to 68% while its apparent diameter increases from 12 to 16.5 arcseconds as it moves closer to the Earth.

Mars is still an evening object due south at sunset at the start of October, although it too lies well below the celestial equator. It begins the period in Sagittarius but its swift eastwards motion carries it across the border with Capricornus early in November, and then on towards Aquarius. Despite the fleet-footedness of Mars, its angular distance from the Sun is gradually falling, although by the end of the period it sets almost five hours after the Sun. As the Earth pulls away from the red planet its brightness and angular size both decrease considerably.

Jupiter was in conjunction with the Sun at the end of September, and emerges as a morning object in mid October when it rises an hour and a half before sunrise. By the end of the period this will have increased to almost five hours with the gas giant being more than 30° in altitude at the beginning of civil twilight. Jupiter is joined on October 28 by a 5% illuminated Moon and on November 25 by a 15% Moon, providing several possible photo opportunities. The planet maintains a magnitude of -1.7 while its angular size increases slightly from 30.6 to 32.7 arcseconds during these two months.

Saturn still lies within southern Ophiuchus and consequently is only 12° high at the end of civil twilight as the period begins. The ringed planet sets two and a half hours after the Sun in early October but this has shrunk by an hour at the start of November. By then Saturn is sinking into the solar glare in readiness for solar conjunction in early December. Its brightness remains constant at +0.5 whilst its apparent size shrinks marginally. The planet should next be visible from the UK in mid-January, low above the south eastern horizon. Titan, Saturn’s largest moon, is at eastern elongation on October 19, and at western elongation on October 8 and 24.

Uranus was at opposition in early September and is still resident in Pisces. On Nov 1 it culminates at 22:30 UT at a very respectable height above the horizon of 46°.

Neptune spends the period in Aquarius, reaching opposition on October 15. On that date it culminates at 22:00 BST with an altitude of 30°.
Pluto culminates a little before 19:30 BST as the period begins, and sets soon after 23:00 BST. It still lies amongst the stars of Sagittarius, within the ‘Teaspoon’ asterism at magnitude +14.6.

(1)Ceres in the constellation of Cetus, the Whale, rises at 20:30 BST at the beginning of October and culminates at 02:33 BST. On the first of November the dwarf planet, at magnitude +7.5, crosses the meridian at 23:00 UT.

In the table I’ve listed events for stars of magnitude 7.0 or brighter, although there are many others that are either of fainter stars or those whose observation may be marginal due to elevation or other factors. DD= disappearance at the dark limb, whilst RD= reappearance at the dark limb. The column headed ‘mm’ indicates the minimum aperture required for the event. Times are for Greenwich and in BST unless otherwise stated. On the night of October 18/19 the Moon once again passes through the Hyades cluster which includes a daylight graze occultation of Aldebaran for those in the southwest of the UK. 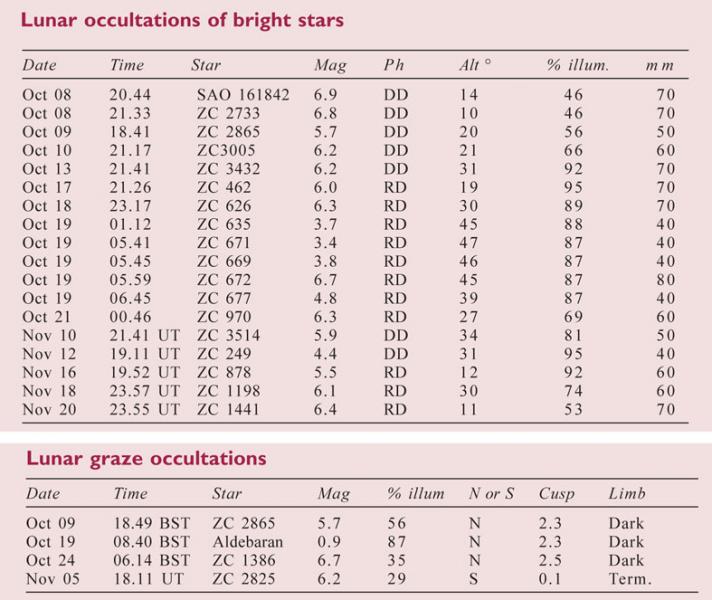 The Orionids, which are associated with Halley’s Comet, are active from October 16 to 30 with a long flat maximum occurring between October 21 and 24. The Moon rises at the same time as Orion as maximum begins but by the end of the maximum the 27% illuminated Moon rises at 02:00 BST. The Zenithal Hourly Rate (ZHR) for this shower is 25 with meteors described as fast, often with persistent trains.

The Taurids are visible from October 20 until November 30 and have two maxima, on November 5 and 12 due to perturbations on the particle streams by Jupiter. The shower is associated with Comet Encke which itself is thought to be just a small part of a much larger comet. The particles are travelling at 28 km/s which is less than half the speed of the Orionids. The ZHR is predicted to be around 10. There will be no lunar intrusion for the earlier maximum but a nearly full Moon in Pisces will interfere with the later one.

The Leonids, a product of Comet Tempel-Tuttle, can be seen from November 15 to 20 with a maximum predicted to occur at 04:00 UT on November 17. Unfortunately, a 72% illuminated waning Moon in nearby Orion will spoil a show that provides some very swift events which often leave persistent trains behind them.

Observers are encouraged to attempt these events and submit results, negative as well as positive, to Tim Haymes at tvh. observatory@btinternet.com. More details are available in the current BAA Handbook. The daylight Aldebaran event occurs with the Sun 10° high and the Moon almost due west (opposite the Sun in the sky) at an altitude of 22°. The graze track crosses the southwest of England from Croyde in Devon to just north of Swanage in Dorset.