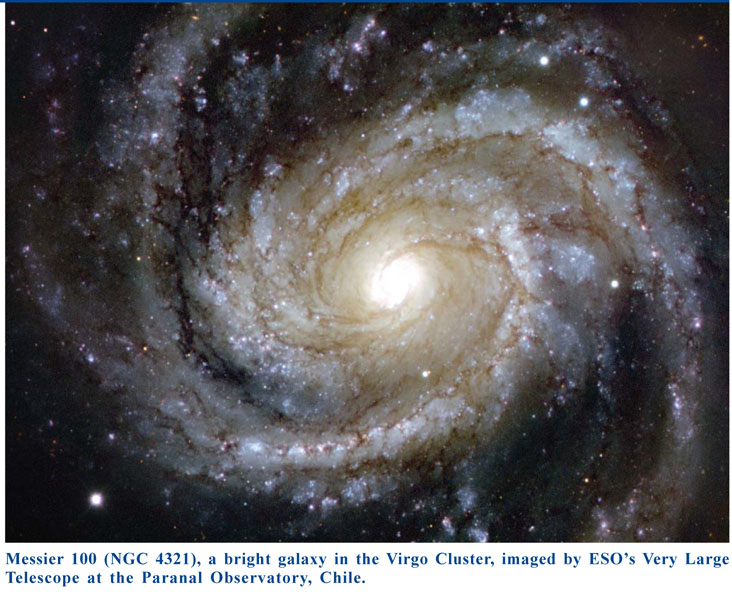 If you look towards the south this month you will see Virgo, which currently contains the planet Jupiter, is on the meridian. It is the second largest constellation by area and contains a large number of galaxies, partly because rather appropriately, it is home to the Virgo Cluster of galaxies thought to contain some 1500 members. One of them is M100, which actually lies across the border in Coma Berenices, and was one of those with a spiral form that Lord Rosse observed with the 72-inch ‘Leviathan of Parsonstown’.

Coma also contains the widely spread cluster Melotte 111, whose 50 members cover more than 7° of sky by area, as well as a number of fine globular clusters, the brightest of which is M53 at magnitude 7.7. Above Coma we find the small and faint group of stars that make up Canes Venatici occupying the zenith. Within its boundaries lies M3 which is probably the best northern globular after M13 in Hercules.

Turning to the west, Orion and Taurus have disappeared with only Canis Minor, Auriga and Gemini remaining from the bright winter groups surrounding the Hunter. A little higher in the sky the open cluster M44 is still well placed at an altitude of 35°, whilst its less well known neighbour, M67, can be found mid-way between M44 and the head of Hydra.

Looking north the familiar ‘W’ of Cassiopeia lies on the meridian and as close to the horizon as it can get, meaning that the Plough is at its greatest altitude with its tail wrapped around the zenith. To the west of Cassiopeia is Perseus with the double cluster between them and to the east we find Cepheus, whose shape has often been described as a child’s image of a house, and the faint group of stars that makes up Lacerta. To find it extend a line from gamma Cas eastwards through beta Cas, and on until you reach the group of four stars that form the Lizard’s head. Lacerta contains a number of open clusters of 6th magnitude but no bright galaxies or globulars.

Towards the east, two of the stars that form the Summer Triangle, Deneb and Vega, are becoming obvious with Vega already 30° in altitude. The main body of Ophiuchus has risen containing the globular clusters M10, M12 and M14, all of which are 6th or 7th magnitude. Above the Serpent Bearer is the rather indistinct shape of Hercules, which in simple terms is made up of two irregular quadrilaterals which form the strongman’s body. His head is represented by the star Rasalgethi (Hercules is drawn upside down in mythology) which looks as if it ought to belong to Ophiuchus due to its proximity to the northern boundary of that constellation. The easiest way to locate Hercules is to draw a line from Arcturus, through alpha Coronae Borealis and eastwards until it reaches one of the previously mentioned quadrilaterals, appropriately known as the ‘Keystone’.

Mercury begins the period at greatest eastern elongation (19°) on April 1 and is 12° in altitude at the end of civil twilight, providing its best evening showing for 2017. It should remain visible low in the west for the first week of the month, but swiftly reaches inferior conjunction on April 20. It then moves into the morning sky to arrive at greatest western elongation on May 17 when, despite being 26° from the Sun, the planet is still below the horizon as nautical twilight ends.

Venus is a morning object at the start of April although it only passed through inferior conjunction at the end of March so is initially still close to the Sun. It hastily moves westwards until, by May 1, its elongation is almost 40°, although on that date it is only 6° above the horizon at the time that the Sun is 6° below it. The situation does improve slightly although even at the time of greatest elongation, on June 3, it will only have an altitude of 8° at the end of morning nautical twilight. The plane 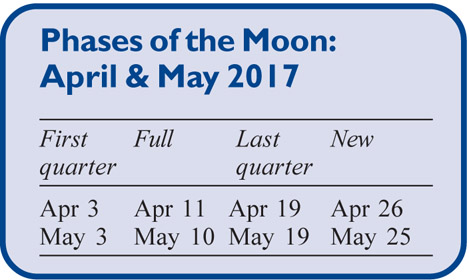 t reaches greatest brilliancy on April 26 when it shines at magnitude -4.5.

Mars is still an evening object although as the days pass it is moving apparently closer to the Sun, with its elongation falling to 17° by the end of the period. The red planet’s brightness drops from +1.5 to +1.7 and its apparent size dwindles to 3.7″ from 4.2″. At the start of the period Mars sets more than three hours after the Sun, but by the end this has slipped to just under an hour and a half and it will be lost to twilight. The planet travels across the border from Pisces into Aries in the middle of April and then on into Taurus in mid-May.

Jupiter is currently an evening object rising at 20:00 BST at the start of April as it heads towards opposition on April 7, when it culminates at 01:00 BST at an altitude of 33°. Its altitude over subsequent oppositions becomes less favourable due to its increasingly negative declination.

At closest approach, Jupiter will have an equatorial diameter of 44.3″ and shine at a magnitude of -2.4 from the confines of Virgo, where it spends April and May moving retrograde. The Moon passes 1½° north of Jupiter just before midnight on April 10 and returns with a gibbous phase to pass fractionally closer on May 7.

Saturn begins the period rising at 02:00 BST but ends it as an evening object rising at 22:00. From April 5 it will be moving retrograde, initially in Sagittarius but latterly in Ophiuchus as it crosses the border moving westwards on May 18. The planet’s apparent size increases slightly to 18.3″ and its brightness grows to +0.1 ahead of opposition in mid-June. Titan is best seen to the west of the planet on April 1/2 and 17/18 as well as May 3/4 and 19/20. The best dates for eastern elongations are April 9/10 and 25/26 plus May 11/12 and 27/28.

Uranus is in conjunction with the Sun on April 14, after which it moves west of the Sun to become a morning object in Pisces. It will be difficult to observe low down in the dawn skies as by the end of May it will still only rise 1½ hours before the Sun.

Neptune is also a morning object, lying a little further west on the ecliptic than Uranus, amongst the stars of Aquarius. Pluto is still in Sagittarius, just below the ‘teaspoon’ asterism, visible as a morning object low in the south east.

(1) Ceres is an evening object and lies close to Mars on April 11 as the Red Planet passes less than 3° to the north. However, it is soon overtaken by the Sun and is in conjunction in early June.

The Lyrids are active from April 18 to 25 with the maximum expected on April 22. Rates are expected to be around ZHR 10. The Moon will be approaching new and will cause few problems for observers.

The Eta Aquarids are visible from April 24 until May 20 and reach maximum on May 5/6. This is essentially a southern shower, as the radiant doesn’t rise as seen from southern England until 02:00 BST.

In the table I’ve listed events for stars of magnitude 7.0 or brighter although there are many others that are either of fainter stars or those whose observation may be marginal due to elevation or other factors. DD = disappearance at the dark limb, whilst RD = reappearance at the dark limb. There is a column headed ‘mm’ to indicate the minimum aperture required for the event. On April 28 the Moon once again passes through the Hyades cluster although sadly on this occasion it occurs in daylight. An occultation of Aldebaran takes place with the Sun still 9° above the horizon as seen from Greenwich. Times are for Greenwich and in BST.

There is just one graze during the months in question, which passes over Northern Ireland and the north of England. Observers are encouraged to attempt this event and submit results, negative as well as positive, to Tim Haymes at tvh.observatory@btinternet.com. More details are available in the current BAA Handbook. 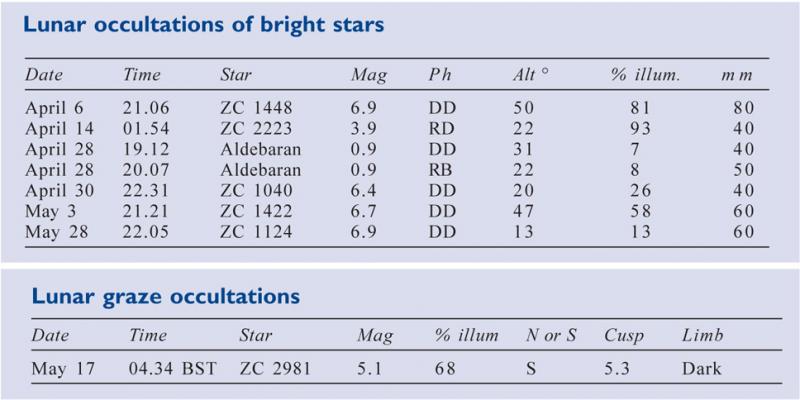