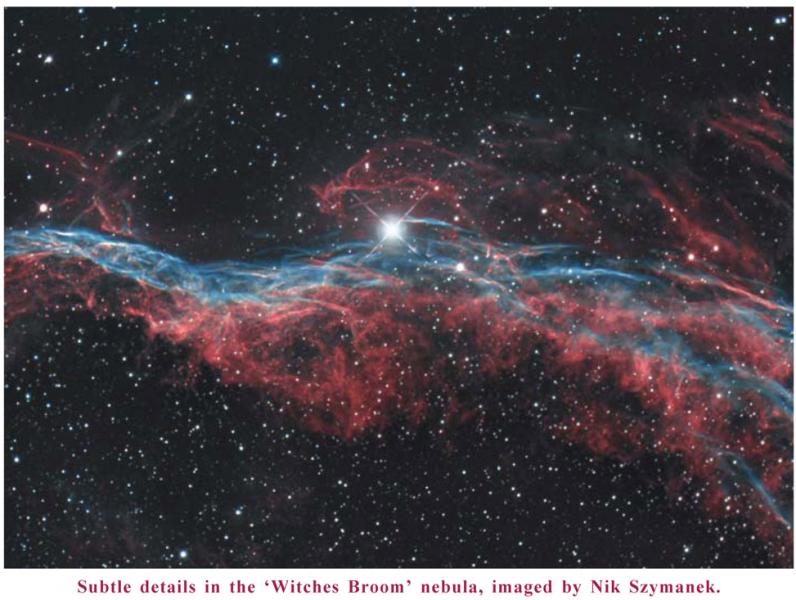 Looking towards the north Ursa Major is about to make its closest approach to the horizon as the head of the Bear straddles the meridian. Despite this M81 and M82 lie at a modest altitude of just over 30°. Ursa Minor points towards the west and in the general direction of alpha Draconis, otherwise known as Thuban, which 5,000 years ago, previously occupied the position of ‘Pole Star’. Approaching the meridian to the north of the North Celestial Pole is Cepheus with a number of clusters to its name, some of which are associated with nebulosity. NGC 7160 is the brightest of the open clusters at magnitude 6.1 and was first identified in 1787 by William Herschel.

A little to the east of the meridian, Auriga, with the brilliant Capella, has fully risen. The brightest star in the Charioteer can be easily identified by using Megrez and Dubhe in the Plough and extending a line forwards, in the opposite direction to the Bear’s tail, until it passes close to alpha Aurigae. The constellation contains a number of open clusters including M36 and M37 at magnitudes 6.0 and 5.6 respectively.

Turning to the east, that first indicator of approaching colder weather, the Pleiades, has risen and is already 10° in altitude. Due east, the head of Cetus is just visible whilst above it the autumn groups of Pisces, Pegasus and Andromeda are becoming more prominent with M31 already 50° above the horizon. Tiny Lacerta, another of the small constellations added by Hevelius, fills the gap between the Winged Horse and the zenith with its northern portion crossed by the Milky Way. There are a few open clusters, NGC7209 and NGC7243 being the brightest, and a number of faint planetary nebulae.

In the south, Cygnus, sometimes referred to as the ‘Northern Cross,’ commands the zenith. The area contains numerous open clusters and nebulae of which the Cocoon nebula and the Veil nebula, a supernova remnant, are perhaps the best known. One of the most imaged segments of the Veil nebula is the ‘Witches Broom’, where the most exquisite and subtle detail can be revealed. The Milky Way runs through Cygnus, more or less along the spine of the mythological swan, and contains the dark dust lane known as the ‘Cygnus Rift’.

The other members of the ‘Summer Triangle’ lie to the west and south of Deneb which itself is just 6° from the zenith. The line of the Milky Way continues towards the horizon passing through the small groups of Vulpecula, Sagitta, Aquila and Scutum before reaching Sagittarius where the galactic core is located. The area is rich with globular and open clusters as well as nebulae. You will be well rewarded if you sweep the area with good binoculars or a rich field telescope.

In the west Arcturus is just 10° above the horizon and will soon be lost along with the large and rather shapeless forms of Ophiuchus and Serpens. Corona Borealis and Hercules are still reasonably well presented with M13 still 45° in altitude.

Mercury was at greatest eastern elongation on the penultimate day of July. Despite the planet’s angular distance from the Sun (27°) it was a poor apparition with Mercury less than half a degree in altitude at the end of civil twilight. The situation doesn’t improve as the planet moves back into the clutches of the Sun with it passing some 4° below our parent star on August 26 when it reaches inferior conjunction. Following that, Mercury gradually moves into the morning sky to reach greatest western elongation on September 12. On that day at 05:55 BST the smallest planet will be 10° above the eastern horizon with the Sun 6° below it.

Venus is a morning object throughout the period although it is two months since elongation. At the beginning of August it is 20° high in the east at the beginning of civil twilight. One month later the altitude of the planet is almost identical despite it moving towards the twilight and even by the end of our period of interest, Venus is still more than 15° in altitude with the Sun 6° below the horizon. Over these two months the phase of the planet has increased from 75% to 90% indicating that next January’s conjunction is not that far away.

Earth reaches the Autumnal Equinox on September 22 at 21:03 BST.

Mars was in conjunction with the Sun in late July so is lost in the solar glare in August, but it should become visible as a morning object in mid-September. On Sept 16 it is 10° above the eastern horizon at the start of civil twilight at magnitude +1.8. At that time it is less than half a degree southeast of considerably brighter Mercury shining at mag -0.7.

Jupiter is still visible as soon as the Sun has set at the beginning of August but by the end of September it will have disappeared into the twilight, and will not be seen again as an evening object until 2018 April. It will be in conjunction with the Sun on October 26, so make the most of the planet and its Galilean satellites while you can. Jupiter’s brightness slips from -1.9 to -1.7 whilst its equatorial diameter drops from 34 to 31 arcseconds. The gas giant’s declination now becomes more negative, keeping it below the celestial equator until May of 2022. 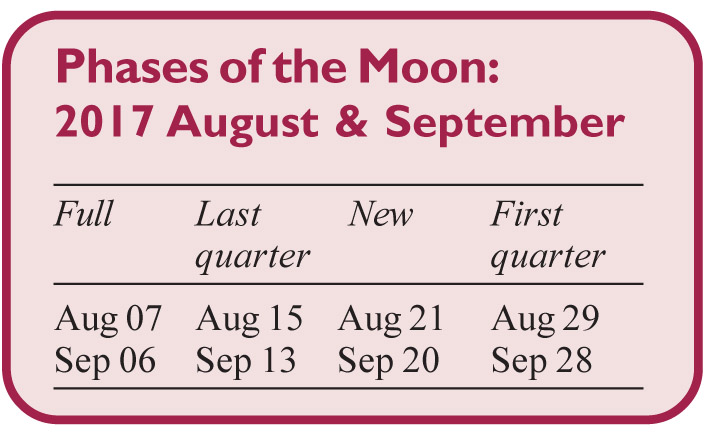 Saturn was at opposition in mid-June so, with respect to brightness and angular size, it is past its best. It spends the whole period in the southern part of Ophiuchus and transits due south at 21:30 BST on August 1. The planet continues its retrograde travel until it reaches its second stationary point on August 25 after which it resumes direct (west to east) motion. By the end of the period Saturn will set before 22:00 BST. However, before that happens, the rings are inclined towards us by almost their maximum, affording stunning views of the upper surface of the ring system.

Uranus, at mag +5.7, begins the period in direct motion, but on August 3 reaches its first stationary point after which it retrogrades. Having made a close approach to the boundary with Aries it now retreats back deeper into Pisces.

Neptune is in Aquarius where it reaches opposition on September 5 with a magnitude of +7.8 and an angular diameter of 2.4 arcseconds. On October 5 Neptune’s largest satellite Triton will occult a 12.7 mag star, giving professionals and advanced amateurs an opportunity to investigate the characteristics of Triton’s atmosphere (see page 194 of this Journal.)

Pluto reached opposition on July 10 at magnitude 14.2 and remains in Sagittarius, close to the ‘Teaspoon’ asterism. On Sept 1 it culminates due south at 21:30 BST at an altitude of 17°.

(1)Ceres was in conjunction with the Sun in early June and is now a morning object, initially in Gemini, but in mid-September its eastward motion carries it over the border into neighbouring Cancer. 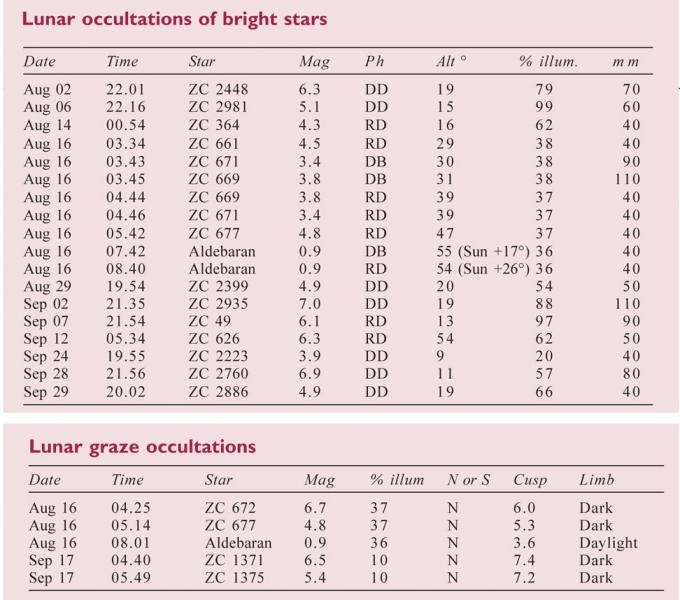 In the table I’ve listed events for stars of magnitude 7.0 or brighter although there are many others that are either of fainter stars or those whose observation may be marginal due to elevation or other factors. DD= disappearance at the dark limb, whilst RD= reappearance at the dark limb. There is a column headed ‘mm’ to indicate the minimum aperture required for the event. Times are for Greenwich and in BST. On the morning of August 16 the Moon once again cuts a swath through the stars of the Hyades cluster and concludes with a daylight occultation of Aldebaran which, visible from Scotland, will be a graze. The brighter events are included in the table. The Moon visits the Hyades again on September 12 but on this occasion only one event occurs before sunrise.

Unfortunately all events that occur in August and September take place in the early morning. However, observers are encouraged to attempt these events and submit results, negative as well as positive, to Tim Haymes at tvh.observatory@btinternet.com. More details are available in the current BAA Handbook.

Several minor showers are active with maxima during August and September. The northern component of the delta Aquarids occurs on Aug 6, though a full Moon will severely hamper observations. The alpha Capricornids are at their most active on the night of Aug 2/3 when a gibbous Moon will set just after 01:00 BST.

The Perseids are the main attraction for the period with maximum predicted for Aug 12 at 20:00 BST. Unfortunately on this occasion a waning gibbous Moon will rise just before 23:00 BST to spoil the party, although next year the Moon will play no part when the shower is at its best.

The solar eclipse of August 21 begins in the Pacific, crosses a large portion of the United States and ends in mid-Atlantic. For those not fortunate enough to be travelling to view it, the option is to watch one of the live ‘feeds’ on the internet of which there are usually a number to choose from. For those of us in the UK there is a small partial eclipse during the evening, though the Sun will be extremely low. For example, as seen from Glasgow (obscuration 2.3%) the partial phase begins at 19:38 BST with the Sun only 6.7° above the horizon, and ends at 20:18 BST when the Sun’s altitude is just 1.3°. In Greenwich, where the obscuration is just under 4%, the Sun is just 3.5° high at the start of the partial phase at 19:40 BST but sets before it has completed. Peter Macdonald’s article giving details of the eclipse in the British Isles can be found in the April Journal, page 78, and is also available on the BAA website.