In the east we see that Leo and the head of Hydra have now risen. Above the water snake’s head lie the faint and indistinct stars of Cancer. Cancer contains one of the best known open clusters, the Beehive or Praesepe, designated M44 by Messier when he compiled his catalogue of fuzzy objects to avoid when searching for comets. When Galileo observed the cluster he noted forty stars with his new telescope, though today we know of at least one thousand group members. The cluster is 95 arcseconds across, meaning it is three times the size of the full Moon, although it is quite diffuse. The other open cluster in the Crab is M67, considerably fainter than the Beehive being only magnitude 6.9, which places it a little below naked eye visibility. 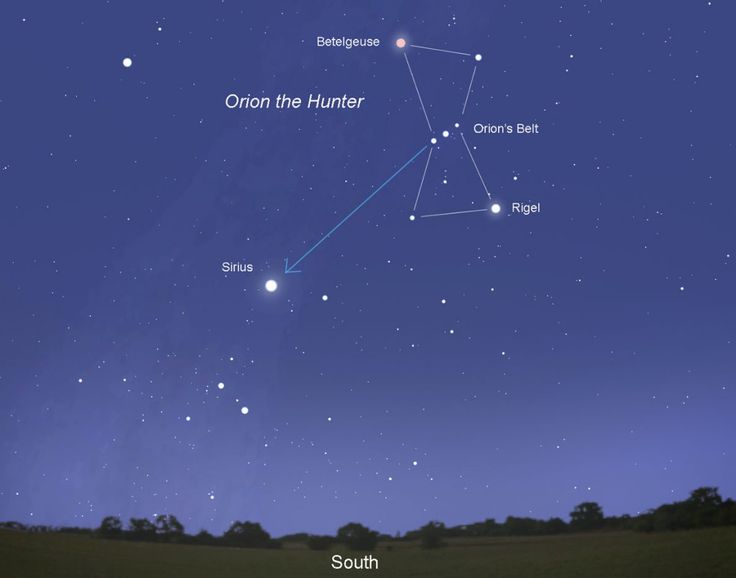 At this time of the year the skies to the south are dominated by Orion the Hunter and the variety of constellations that surround him. Generally we think of these as being two dogs (Canis Major and Canis Minor) a bull (Taurus) and the twins (Gemini). However, he is also flanked by a hare (Lepus) a unicorn (Monoceros) and to add a little variety, the river (Eridanus). You could be forgiven for thinking that with Beta Eridani being in such close proximity to Rigel, it must be a member of Orion, but this is not the case as the boundary passes between the two. Eridanus is the sixth largest constellation by area and winds its way from the foot of Orion to within 15° of the Small Magellanic Cloud.

However Monoceros has far more in the way of bright objects to recommend it. It is home to M50, NGC 2232 and NGC 2244, all of which are open clusters. The Christmas Tree (NGC 2264) is another such cluster with an aggregate magnitude of 3.8, which suggests it should be a moderately easy naked eye object.

The bright star Capella lies just a few degrees from the zenith whilst below it only Taurus from Orion’s retinue has reached the meridian.

Towards the west we see that the western extremities of Pegasus are on the horizon although Andromeda points towards the zenith, and its spiral galaxy M31 is still some 50° in altitude. At mag 3.4 it is a naked eye object in good skies but photography really brings out the best in it. It is an excellent target for the DSLR user who takes numerous exposures and then stacks them. You will also be able to record two of M31’s satellite galaxies, M32 and M110. Also in Andromeda at mag 5.7 is a large open cluster, NGC 752, which has around sixty members.

Not too far from the Andromeda spiral lies M33, known as the Triangulum or Pinwheel galaxy, which is face on to the Earth and much more difficult to detect due to its low surface brightness.

In the north Vega is close to the horizon and will set briefly from the south of England, though its fainter companion from the Summer Triangle, Deneb, is circumpolar from there. Ursa Major is once more climbing away from the horizon whilst on the opposite side of the north celestial pole Cepheus, that lies partly within the Milky Way, is descending. Cepheus contains IC 1396, an emission nebula that is said to be visible to the naked eye when conditions are exceptional. It is also home to Mu Cephei, more popularly known as the Garnet Star due to its deep orange hue.

Mercury was at greatest elongation east in late November, so it is moving back into the clutches of the Sun during December. On the first of the month the tiny planet, at mag +0.2, is just 2° in altitude at the end of civil twilight. It reaches inferior conjunction on Dec 3 after which it moves west of the Sun to become a morning object at elongation 23° on the first day of 2018, providing one of this year’s best morning apparitions. With a magnitude of -0.2 it will have an altitude of 8° when the Sun is still 6° below the horizon.

Venus is still a morning object though it is moving swiftly back into the Sun’s clutches. At the beginning of December it rises less than an hour before the Sun and January 9 sees it reach solar conjunction, so it will be mid- to late February before Venus becomes prominent in the evening skies.

Earth reaches the winter solstice (for the northern hemisphere) on December 21 at 16:28 UT. Perihelion occurs at 05:35 on January 3.

Mars rises four hours ahead of the Sun at the start of the period and is initially resident in Virgo. However, it crosses into neighbouring Libra on Dec 22 and remains there until the last day of January when it enters Scorpius. On Jan 7 Mars passes just 0.2° south of a much brighter Jupiter. Throughout December and January, Mars gradually increases in both brightness (mag +1.7 to +1.2) and apparent diameter (4.2 to 5.5 arcseconds). There will be an opposition of the Red Planet this year on July 27 although with a declination of -25° it will never be very well placed from the UK.

Jupiter is also a morning object, having suffered solar conjunction in late October. At the start of December it rises nearly three hours ahead of the Sun whilst by the end of January this has grown to more than five hours. This allows it to be observed in a dark sky amongst the stars of Libra where it remains for the entire period although, like Mars, its negative declination will mean that its altitude will be very limited. The planet’s magnitude increases from -1.7 to -2.0.

Saturn is initially too close to the Sun for observation and reaches solar conjunction on Dec 21, after which it moves west of the Sun into the morning sky. It may be glimpsed low down in the southeast before dawn in late January when it will rise two hours ahead of the Sun.

Uranus spends the period in Pisces, having been at opposition in mid-October. On the first day of the new year it transits due south at an altitude of 48°.

Neptune is in Aquarius and can be found due south in the early evening at the start of December.

Pluto, close to the Teaspoon asterism in Sagittarius, is too close to the Sun to be observed in a dark sky during this period. It will reach opposition on 2018 July 12.

(1)Ceres spends almost all of the period close to the ‘Sickle’ of Leo, only moving across the border into Cancer in the closing days of January. 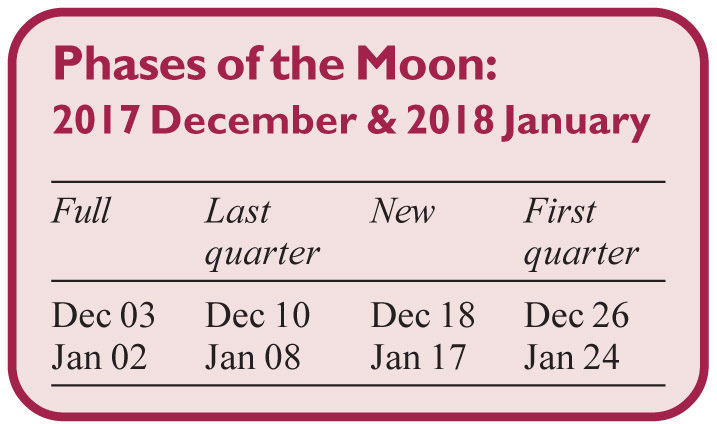 In the table I’ve listed events for stars of magnitude 7.0 or brighter although there are many others that are either of fainter stars or those whose observation may be marginal due to elevation or other factors. DD = disappearance at the dark limb, whilst RD = reappearance at the dark limb. The column headed ‘mm’ indicates the minimum aperture required for the event.

Another passage of the Moon through the Hyades cluster occurs on the night of Dec 30/31, culminating in a disappearance and reappearance of Aldebaran. There is also a daylight occultation of Regulus, although it will be comparatively low in the sky from the UK, especially for the reappearance. Times are in UT. 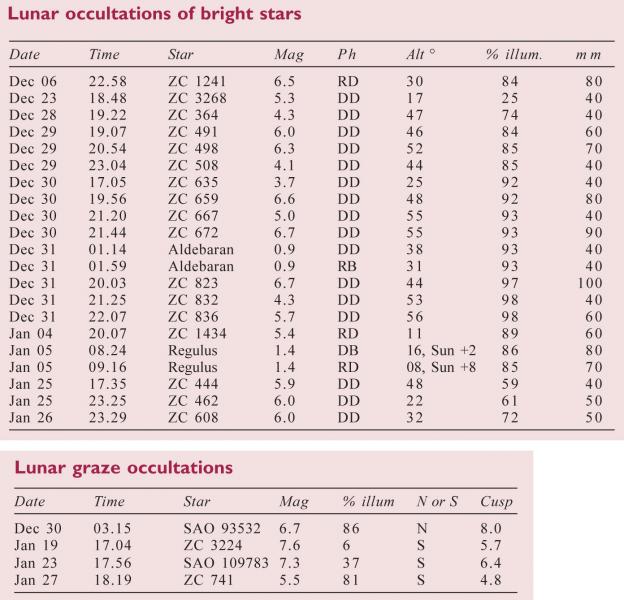 Four graze events occur during December and January. Observers are encouraged to attempt these events and submit results, negative as well as positive, to Tim Haymes at tvh.observatory @btinternet.com. More details are available in the current BAA Handbook. Times are in UT.

The Geminids, one of the few showers that don’t originate from a comet, are the year’s most prolific shower with a zenithal hourly rate (ZHR) of over 100. Activity lasts from Dec 8 to 17 with maximum taking place on Dec 13/14 at 02:00. The meteors travel comparatively slowly at approximately half the speed of the August Perseids. A 14% waning crescent Moon in Libra will rise at 03:30 but will cause little interference.

The Ursids are active from Dec 17 to 25 and reach maximum activity on the night of Dec 22/23 when up to 10 events per hour can be expected given ideal conditions. There will be no interference from the crescent Moon as it sets around 20:00 on that night.

The Quadrantids usher in the new observing year and run from January 01 to 06, with peak activity on Jan 03 at 21:00. The ZHR at maximum is predicted to be in the region of 80, though a gibbous Moon in Cancer will rise at 18:00. The name relates to a now defunct constellation, Quadrans Muralis, which disappeared during the IAU reorganisation in 1930. The shower name remains as before but the radiant now lies within the boundaries of Boötes, the Herdsman.