In the south the faint constellation of Lynx lies close to the zenith, whilst below it Cancer and the open cluster M44 lie on the meridian. The head of Hydra is also due south, though the last vestiges of its tail will not clear the horizon for several more hours. In that region M83, the Southern Pinwheel galaxy, can be found though it is always going to be a challenge, culminating with an altitude of just 9° from the south of England. 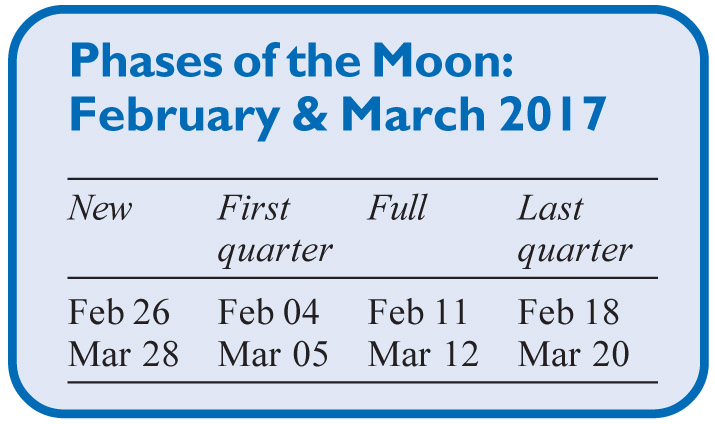 Also to be found low down towards the south is the northern half of the constellation Puppis which forms the ‘poop deck’, or stern, of the original ship Argo Navis. The most prominent of its stars visible from the UK is Rho Puppis at magnitude +2.8 which currently can be found 15° above the horizon. There are a number of open clusters in the area, the brightest of which is M93 at mag +6.2. Just to the west lie some members of Orion’s retinue, namely Canis Major, whose brightest star Sirius has passed its best, and Lepus. Above them we find the faint and shapeless form of Monoceros (the Unicorn) that is home to NGC 2264, a designation that encompasses the Cone Nebula and Christmas Tree Cluster. The Cone itself is a difficult visual object although a UHC filter can help.

Turning to the west Orion and Taurus are approaching the horizon although both Betelgeuse and Aldebaran are just over 30° in altitude whilst Capella in Auriga is more than 50°. Below Capella, Perseus and the double cluster are still well placed as are a number of other open clusters in the area. One of the more memorable is M34, with an estimated 400 members, which lies close to the border with Andromeda. Pegasus and Pisces are now all but set and soon to be followed by Andromeda itself along with Triangulum and Aries, that lie between the celestial Queen and the head of the whale.

Looking north we find that the only circumpolar member of the Summer Triangle, Deneb, is due north just above the horizon, whilst the brightest of the three, Vega, is visible some 25° to the east. Cepheus and Draco lie below the pole and either side of the meridian; Cepheus to the west and Draco to the east. Cepheus contains NGC 7023, sometimes referred to as C4 or Caldwell 4, but better known as the Iris Nebula, a moderately bright reflection nebula that shines at magnitude 6.8.

Ursa Major is still climbing and will soon be close to the zenith providing an excellent opportunity to image M81, Bode’s Galaxy, at an altitude of some 70°. It is a mag 6.9 spiral galaxy that was discovered by Johann Bode in 1774 and was home to a supernova in March 1993. Its near neighbour is M82 which is known to be a ‘starburst’ galaxy, where star formation is taking place at a rate far in excess of that in the Milky Way. A DSLR camera used with a F6 refractor or similar provides a pleasing wide angle vista and will include NGC 3077 as a bonus.

Towards the east Virgo, currently containing the planet Jupiter, has just risen as has Boötes and Corona Borealis. Hercules is also now appearing with M13 and M92, two bright globular clusters, though don’t forget M3 and M53 in Canes Venatici and Coma Berenices respectively.

Mercury was at elongation in mid-January, so is still a morning object at the beginning of February though it rises a little under an hour before the Sun. It will be a difficult object being only 2° in altitude at the start of civil twilight with a magnitude of -0.2. It reaches superior conjunction on March 7 after which it moves east of the Sun to reach greatest elongation on April 1. By the end of March Mercury will set nearly two hours after the Sun and will be 12° high in the west at the end of civil twilight. By then it is past its best, in terms of brightness, but will still be mag -0.5.

Venus reached greatest eastern elongation on January 12, but still dominates the evening sky in the south east even before darkness has fallen. At mag -4.6 it shines like a beacon for more than four hours after sunset, though its brightness will have dropped half a magnitude by the end of the period. As the planet’s elongation decreases so does its phase as the crescent it now presents to us becomes progressively slimmer. However, by way of compensation, Venus’ apparent size grows considerably as it approaches inferior conjunction on March 25. It inhabits the constellation of Pisces for the whole of February and March.

Mars is also still an evening object, beginning the period in Pisces but moving into neighbouring Aries on March 8. It is close to Venus for the first two weeks of February but continues to move eastwards to pass just over half a degree west of Uranus on Feb 26. Despite this movement to the east, the distance between Mars and the Sun is dwindling all the time in preparation for a solar conjunction in late July. The apparent size of the red planet continues to fall from 5.1 to 4.2 arcseconds as the distance between our two bodies increases. Correspondingly, the visual magnitude of Mars also drops from +1.1 to +1.5 during the months in question.

Jupiter begins February rising just before midnight and moving direct in Virgo until it reaches its first stationary point on February 7, after which it moves retrograde (east to west) until mid-June. By the end of March the gas giant will be almost 30° in altitude in the south-south-east at midnight and will reach opposition just seven days later when it culminates just after 01:00 BST at an altitude of 33°. Jupiter is cursed with negative declination not only during this opposition but throughout the entire year and into the future. It will be 2020 before the situation begins to improve, and then only marginally. During most of March the planet is at its maximum brilliance of -2.4, though earlier in the period it is fractionally fainter.

Saturn is a morning object in southern Ophiuchus as the period begins but its easterly motion carries it across the border into Sagittarius on Feb 24. The ringed planet continues to pull away from the Sun until by the end of March it rises four and a half hours ahead of it. Despite that it will be mid May before Saturn becomes an evening object again. Its brightness remains constant at +0.5 throughout February and March.

Uranus is still in Pisces at mag 5.7 and sets more than six hours after the Sun at the start of the period. This allows it to be viewed in a dark sky when it has an altitude of close to 40°.

Neptune (mag +7.9) still inhabits Aquarius, so is just 15° in altitude at the end of civil twilight early in February. Its period of visibility will be short as it is in conjunction with the Sun on March 1.

Pluto is a morning object in Sagittarius, but too close to the Sun for observation at the start of the period. By the end of March it rises almost four hours ahead of the Sun although it will always be low down and only visible in a truly dark sky for a short time.

(1) Ceres moves from Pisces into Cetus in mid-February, which it occupies only briefly before entering Aries in early March. It will be visible for a limited time as it enters solar conjunction on June 6.

A penumbral eclipse of the Moon will occur just after midnight on February 11. The event begins at 22:34 on Feb 10 when the Moon first contacts the penumbral shadow and ends at 02:50 when the Moon finally leaves it. It is worth remembering that penumbral changes in the lunar brightness are subtle and will not be obvious to a casual glance.

In the table I’ve listed events for stars of mag 7.0 or brighter although there are many others that are either of fainter stars or those whose observation may be marginal due to elevation or other factors. DD= disappearance at the dark limb, whilst RD= reappearance at the dark limb. The column headed ‘mm’ indicates the minimum aperture required for the event. Times are for Greenwich and in UT unless otherwise indicated. The Moon passes through the Hyades cluster on both Feb 5 and March 4/5 causing multiple events on each occasion.

There are five events during the months in question, some of which occur at quite social times of the evening. Observers are encouraged to attempt these events and submit results, negative as well as positive, to Tim Haymes at tvh.observatory@btinternet.com. More details are available in the current BAA Handbook. 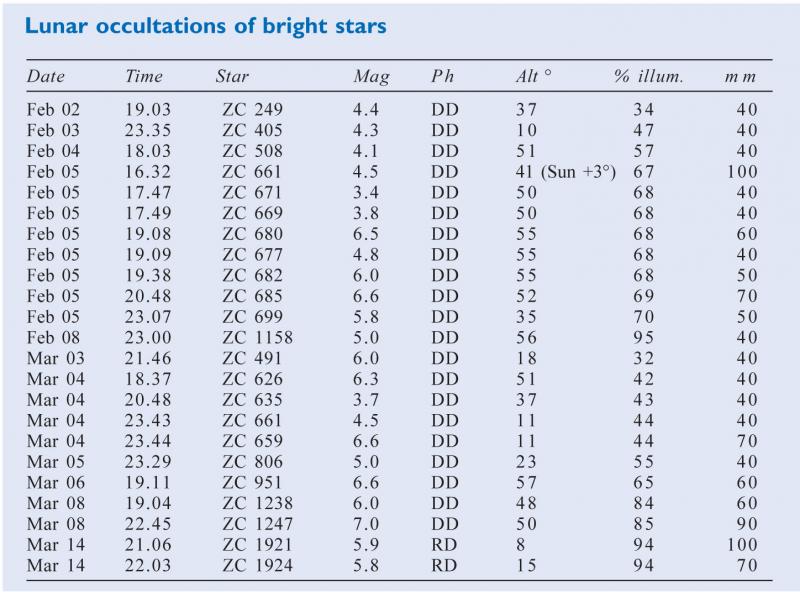 BST begins at 01:00 UT on Sunday March 26 when clocks should go forward one hour.