Looking towards the north, the tail of Ursa Major straddles the meridian as the Bear begins his climb away from the horizon once more, with that photogenic pair M81 and M82 now 35° in altitude. Cassiopeia lies at the zenith with Cepheus to the west and Perseus and Camelopardalis immediately to the east. Camelopardalis is the 18th largest constellation by area but it contains mostly faint stars, with Beta Cam, at magnitude 4.03, being the brightest. There are a number of galaxies of mag 9 to 11, plus an open cluster, NGC 1502 at mag 5.7. This is a notable object because ‘Kemble’s Cascade’, an asterism of at least 20 stars that forms an almost straight line, has been described as ‘tumbling’ towards the cluster. The stars in the Cascade are not in any way connected and only appear as they do, due to a line of sight effect. 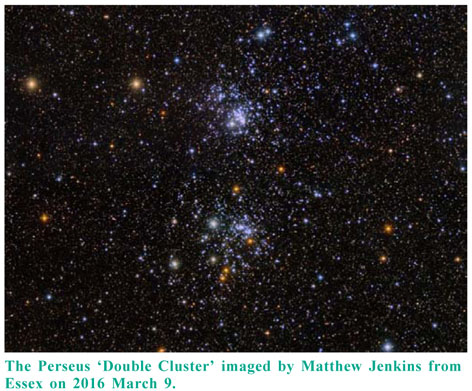 In the east the winter groups are coming into view with Gemini, Auriga, Taurus (with the Pleiades already nearly 50° in altitude) and Orion all now clear of the horizon. Apart from the well known Pleiades and Hyades, Taurus contains a number of other open clusters, mostly of mag 6 to 7. It is also home to the very first object in Messier’s catalogue, M1, the Crab Nebula, although it had been observed some 27 years earlier in 1731 by the Englishman John Bevis. It is the remnant of a supernova event that occurred in 1054, and contains a rapidly rotating neutron star. At mag 8.4, good binoculars will show the nebula; with apertures of more than 150mm it appears as an oval patch of diffuse light, whilst a 300mm instrument will show some filamentary details. To the north of Taurus lies Perseus, with the famous double cluster 75° above the horizon to the east.

The south contains very little by way of sparkle when compared to what the east has to offer. Close to the zenith are Andromeda and Pegasus, both containing objects of interest, and the Milky Way passes just north of them both. Andromeda, as well as being home to the M31, M32 and M101 complex of galaxies, boasts a number of open clusters with NGC 7686 and NGC 752 the brightest at magnitudes 5.6 and 5.7 respectively. Also in the area is a mag 9.2 planetary nebula, NGC 7662, otherwise known as the ‘Blue Snowball’. This needs an instrument with a diameter of 300mm or above to reveal anything more than a tiny bluish disk.

Below the Pegasus ‘Square’ is Pisces, where Uranus has been resident since 2009 excepting a brief dalliance with the borders of Cetus in 2013 March. Closer still to the horizon are Cetus and Aquarius, the latter of which at the moment holds the other ice giant, Neptune.

Towards the west the three members of the Summer Triangle are still visible though Altair will be the first to be lost. Above Altair in a line from west to east are the four small constellations of Vulpecula, Sagitta, Delphinus and Equuleus of which Sagitta, the arrow and Delphinus, the dolphin are the most obvious. With a little imagination it is possible to see similarities in both to their mythological namesakes.

Mercury is a morning object, at magnitude -1.4, in the first few days of October rising 30 minutes ahead of the Sun. It reaches superior conjunction on October 8 and subsequently moves east of the Sun to become an evening object. However, this is a poor apparition for northern hemisphere observers because the planet, even at greatest elongation on November 24, is always very low in the sky and even on that night will set less than an hour after the Sun. Mercury then moves back into the clutches of the Sun to reach inferior conjunction in mid-December.

Venus begins October as a magnitude -3.9 morning object, rising over two hours before the Sun. It is gradually moving back into the twilight and on this journey passes just 0.2° from the much fainter Mars on October 5. By the end of November Venus rises a little before 07:00 which is only three quarters of an hour before the Sun. The angular distance between the two bodies continues to fall as Venus approaches a solar conjunction in early 2018 January.

Mars is also a morning object, but in this case it is drawing away from the Sun and rises two hours ahead of it as the period in question begins. By the end of October this has stretched to three hours and by the end of November it is over four hours. The red planet is initially in Leo but crosses the border into Virgo in mid-October where it remains, passing close to Spica on the last day of November. During these two months the apparent size of Mars climbs from 3.7 to 4.2 arcseconds whilst its brightness rises very slightly from mag 1.8 to 1.7.

Jupiter is still technically an evening object in early October, although it is effectively lost in the twilight and sets half an hour after the Sun. The giant planet reaches solar conjunction on October 26 after which it moves west of the Sun to become a morning object. It quickly pulls away from the Sun, passing just 0.3° from Venus (mag -3.9) on November 13*. By the time we reach the end of November, Jupiter will rise two and a half hours ahead of the Sun shining at mag -1.7. It spends most of the period in Virgo but in mid-November its direct motion carries it over the border into neighbouring Libra.

Saturn is in the south-south-west and only 14° in altitude at the end of civil twilight as the period begins. Despite this it is still an excellent sight in moderate telescopes as it continues to present its northern hemisphere to Earth. It begins October in Ophiuchus but moves eastwards into Sagittarius in mid-November, though by then it will be setting just an hour and a half after the Sun.

Uranus spends the whole period in Pisces where it has been a long term resident although this association will end in late April of 2018. The planet’s positive declination means that it culminates due south with an altitude of almost 50°. It reaches opposition on October 19 with a magnitude of 5.7 and an angular diameter of just 3.7 arcseconds. 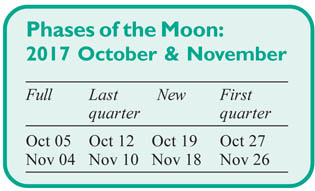 Neptune was at opposition in early September and currently lies below the celestial equator within the confines of Aquarius. It crosses the meridian, due south, with an altitude of a little over 30° as the period begins.

Pluto still lies just below the ‘Teaspoon’ asterism in Sagittarius with a visual magnitude of 15.1.

(1) Ceres is a morning object in Cancer, rising at midnight at the beginning of October. By the end of November it rises at 21:00 and culminates 60° above the horizon at 05:00. By then it has crossed the border into neighbouring Leo.

In the table I’ve listed events for stars of magnitude 7.0 or brighter although there are many others that are either of fainter stars or those whose observation may be marginal due to elevation or other factors. DD = disappearance at the dark limb, whilst RD = reappearance at the dark limb. There is a column headed ‘mm’ to indicate the minimum aperture required for the event. The Moon makes another passage through the Hyades on the night of November 5/6 which this time includes an occultation of Aldebaran. Times are for Greenwich and in UT unless otherwise stated. 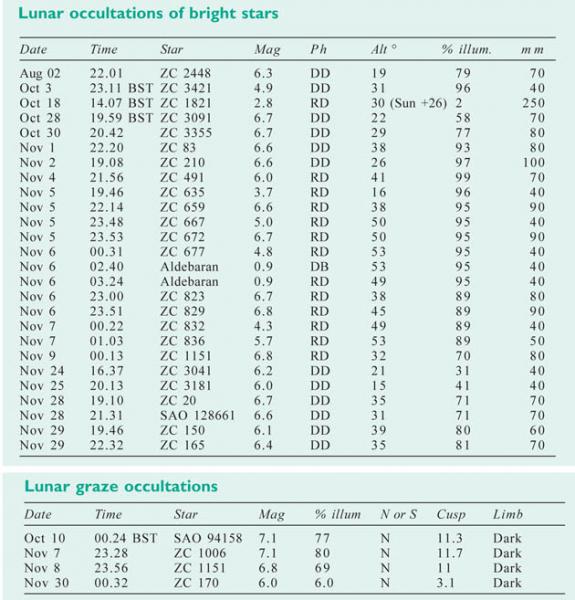 Four graze events occur during October and November. Observers are encouraged to attempt these events and submit results, positive or negative, to Tim Haymes at tvh.observatory@ btinternet.com. More details are available in the current BAA Handbook. Times are in UT unless otherwise stated.

The Orionids are active from October 16 to 23 with a long flat maximum from Oct 21 to 23, when 25 meteors per hour could be expected given optimum conditions. A slim crescent Moon will be setting as Orion rises around 22:00 BST during the period of peak activity, and by 05:00 BST the radiant is more than 50° in altitude and transiting due south.

The Taurids are visible from Oct 20 until Nov 30 and have two maxima, on Nov 5 and 12. The particles in these streams are travelling at around 28 km/s which is less than half the speed of the Orionids, and they have a predicted ZHR of around 10. The Moon will seriously interfere with the earlier of the two peaks as it coincides with the Hyades occultations, but the later one will suffer much less with the waning crescent not rising until after 01:00 on the morning of Nov 13.

The Leonids can be seen from Nov 15 to 20 with a maximum predicted to occur at 19:00 on Nov 17. Fortunately the Moon this year will not spoil a show that can provide some very swift events which often leave persistent trains in their wake.

* Erratum: The printed Journal incorrectly notes this conjunction as occurring on October 13 rather than November 13. Apologies.