In the south the body of Hydra, the water snake, lies parallel to the horizon whilst the small constellations of Corvus, the crow and Crater, the cup, ride on its back. Corvus contains few deep sky objects although it is home to the so-called Antennae Galaxies, NGC 4038 & 4039, where two spirals can be seen interacting. At magnitude 10.7 a 200mm instrument is needed to show them well visually although they also radiate strongly in X-ray wavelengths. 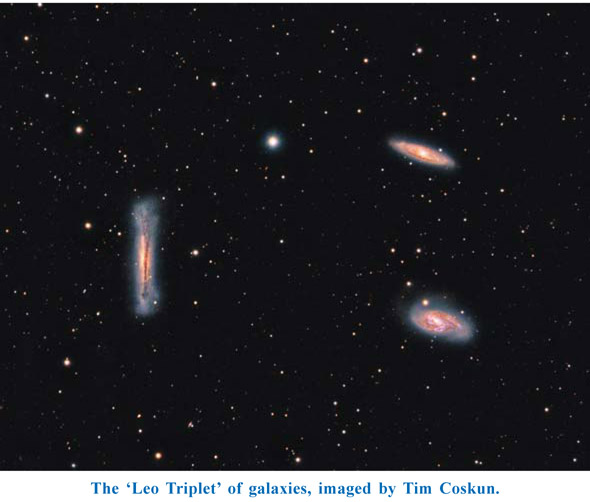 Just across the northern border of Corvus in neighbouring Virgo is M104, the Sombrero Galaxy. This is an elliptical galaxy seen almost edge on, with a striking dark dust lane where star formation is thought to be occurring. Of course, any shortage of galaxies in Corvus is balanced by a plethora of them in Virgo, where the aptly named Virgo Cluster of galaxies is found. [See Stewart Moore’s article on page 117 for more about observing the Virgo galaxies.]

Leo also has its fair share of galaxies, of which among the most imaged are the Leo Triplet that lies a little to the south of Q (theta) Leonis. It consists of two Messier objects, M65 and M66 at magnitudes 9.3 and 9.0 respectively, plus slightly fainter NGC3628 at mag 9.5.

The body of the water snake reaches almost to the west where its head can be found just south of Cancer. The bright winter groups have mostly disappeared although the celestial twins lie just beyond due west and are still 30° in altitude. One of the last remnants to disappear will be Capella in Auriga that is still prominent in the northwest at the moment.

Towards the north Ursa Major is almost overhead though that actual distinction rests with the small constellation of Canes Venatici, the hunting dogs belonging to Boötes the herdsman. Of the galaxies within its borders M51 is by far the best known, as the first one to be identified as being spiral in nature. Although the galaxy was noted by Messier in 1773, it was not recognised as spiral in form until the 3rd Earl of Rosse identified it as such using what was then the world’s largest telescope at Birr Castle, Ireland, in 1845. 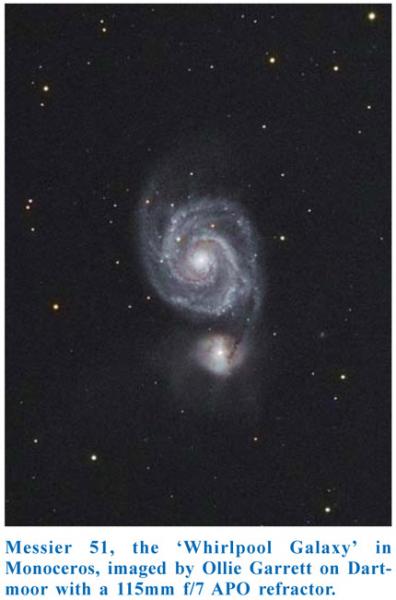 Ursa Minor points north towards its larger cousin whilst below it Cassiopeia straddles the meridian due north. Just to the west of the familiar ‘W’ are the Heart and Soul nebulae, both at mag 6.5.

In the east the summer constellations in waiting are beginning to show their hand. Two of the three members of the Summer Triangle, Deneb and Vega, are already twenty and thirty degrees in altitude respectively, with the final member, Altair, soon to join them. Hercules and Corona Borealis lie due east with Arcturus a little further west. A line drawn from Arcturus through Alphekka (alpha Coronae Borealis) and onwards will bring you to the ‘Keystone’, which forms the lower part of the strong man’s body. In our skies Hercules is drawn ‘upside down’, so that his head lies close to the border with northern Ophiuchus.

Mercury, having just put on its best 2018 evening show for the UK, reaches inferior conjunction on April 1. It then moves into the morning skies where it will be best seen from the southern hemisphere when greatest western elongation (27°) takes place on April 29. The smallest planet then moves back into the solar glare to reach superior conjunction in early June.

Venus is visible low down in the west as soon as the Sun has set at the beginning of April when it will be 11° high at the end of civil twilight (Sun 6° below the horizon). By the end of May its altitude has increased to 16° although as our period ends Venus’s altitude remains unchanged despite its elongation increasing. This is because the angle that the ecliptic makes with the horizon becomes shallower as the months pass, preventing the planet from putting on its most dazzling show. Venus will reach greatest eastern elongation in mid-August.

Mars is a morning object throughout April and May, rising at 03:00 as the period begins when it can be found amongst the star fields of Sagittarius, a little north of the ‘Teapot’ asterism. On April 2 it passes just over a degree south of a slightly fainter Saturn as it makes it way swiftly eastwards, moving into neighbouring Capricornus on May 14. The red planet brightens considerably from mag +0.3 to -1.1 over these two months and increases in angular size from 8.5 to 15.2 arcseconds as it approaches opposition in late July. 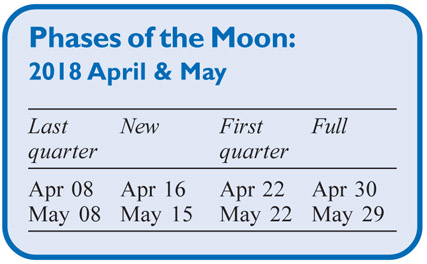 Jupiter is now technically an evening object rising before midnight early in April as it travels retrograde in Libra. The gas giant comes to opposition on May 9 when it rises at a little after 20:00 BST and culminates at 01:00 BST at a rather disappointing height above the horizon of 23°. (Subsequent oppositions fare even less favourably for the UK as the planet attains altitudes of 16° in 2019 and 17° in 2020. Southern temperate latitudes will be best placed for observation during these years). Jupiter’s magnitude at the time of opposition will be -2.5 and its apparent equatorial diameter will have grown to 44.8 arcsec.

Saturn begins the period as a morning object in Sagittarius, rendezvousing with Mars there on April 2, although by the end of May it will rise before 23:00 as seen from the southern UK. The planet reaches its first stationary point on April 17 after which it moves retrograde until early September. Saturn, like Mars and Jupiter, is also approaching opposition though in the case of the ringed planet this will occur in late June. Its brightness rises to +0.2 whilst its equatorial diameter (excluding rings) reaches 18.2 arcsec. Titan is best seen west of the planet on April 4 & 20 and on May 6 & 22. It is best placed to the east on April 12 & 28 and on May 14 & 30.

Uranus is at solar conjunction on April 18 after which it moves west of the Sun to become a morning object on the Pisces/Aries border.

Neptune was in conjunction with the Sun in early March and so lies a little further west along the ecliptic than Uranus in the constellation of Aquarius. By the end of May it rises at 02:00 BST, two and a half hours ahead of the Sun. The position of the ecliptic at that time in the morning is not conducive to observing and the planet’s negative declination makes things slightly worse.

Pluto still resides in Sagittarius, just south of the ‘Teaspoon’ asterism where Mars will pass a degree and a half south of it on April 26. The dwarf planet comes to opposition in mid-July.

(1) Ceres is an evening object whose magnitude falls from +7.9 to +8.7 during April and May. It remains in northern Cancer until May 13 when it crosses the border into neighbouring Leo.

In the table I’ve listed events for stars of magnitude 7.0 or brighter although there are many others that are either of fainter stars or those whose observation may be marginal due to elevation or other factors. DD= disappearance at the dark limb, RD= reappearance at the dark limb whist DB or RB indicate an event at the bright limb. There is a column headed ‘mm’ to indicate the minimum aperture required for the event. Successful observations of these events should be reported to Tim aymes at occultations@ stargazer.me.uk. Times are in BST.

The Lyrids are active from April 18 to 25 with maximum occurring on the night of April 21/22 as the Earth passes through the debris trail of Comet Thatcher. At that time the zenithal hourly rate (ZHR) is expected to be around 15 meteors per hour given perfect conditions and the radiant at the zenith. A first quarter Moon will set in the northwest at 02:00 when the radiant will be 50° in altitude in the east.

The Eta Aquarids can be seen from April 25 to May 20 with maximum activity expected on the night of May 5/6. This is primarily a southern shower and with the Sun in nearby Aries and a waning gibbous Moon in Sagittarius, UK conditions are not ideal. The ZHR is predicted to be 40 though the minimal altitude of the radiant will seriously impact this.