Looking east we see that Pegasus and Andromeda are now prominent giving that staple of the autumn skies, M31, an altitude of 50°. Below them, the fishes of Pisces have risen along with most of Cetus, the whale. Between the whale and Andromeda, Cassiopeia’s daughter in mythology, are the two small but obvious constellations of Aries and Triangulum.

The former is of course a zodiacal group that hosts the Sun from late April to mid May while the latter is home to the Triangulum Galaxy, also known as M33. At magnitude +5.7 it is one of the most distant objects that are visible with the naked eye and one that Lord Rosse turned the ‘Leviathan of Parsonstown’ upon to try to resolve what became known as the Nebular Hypothesis.

North of Pegasus is the small and rather indistinct constellation of Lacerta, the Lizard, whose brightest star is just mag 3.8. It contains no bright galaxies but has a selection of open clusters, the brightest of which is NGC 7243 at mag +6.4. 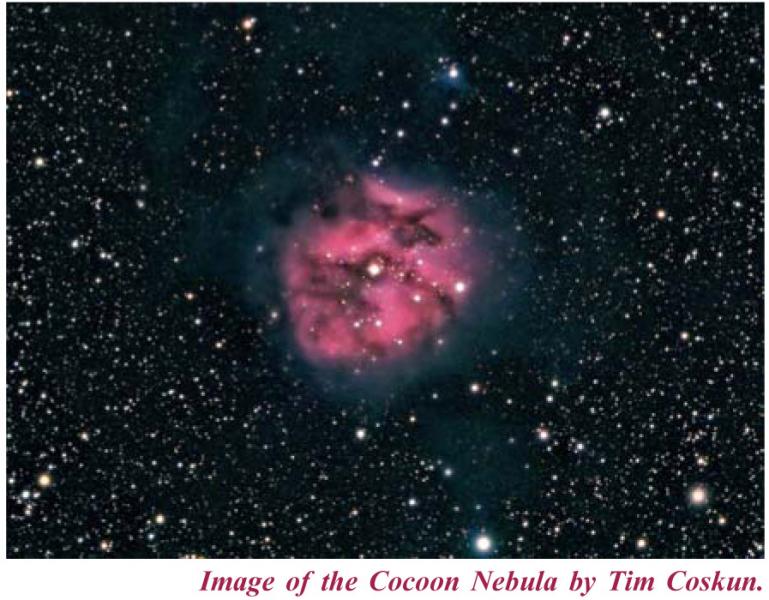 In the south Deneb, in Cygnus, is on the meridian and close to the zenith; a point which currently lies within the boundaries of the mythological Swan. This is one of Ptolemy’s original 48 groups that have endured since the second century, and contains the Northern Cross asterism. The Milky Way runs along the spine of the constellation so there are no globulars or bright galaxies but there are open clusters and nebulae aplenty. The North America and Pelican nebulae are two of the most widely imaged, both of which straddle the galactic equator. The Cocoon nebula, close to the border with Lacerta, is small in comparison at only 12 arcminutes across, to the 100´120 arcminute dimensions of the North America Nebula.

A little to the south of Cygnus is the small but distinct group of stars that form Delphinus, the Dolphin, and further south still the large but faint constellation of Capricornus which is home to the globular cluster M30. This is a cluster of mag +7.5 that has already passed through the process known as core collapse and has an age estimated to be 12.9 billion years.

If you live in the southern UK, or even further south, look for the faint stars, the brightest of which is +4.8, that form Microscopium which at this time of year sits between Capricornus and the horizon. Sadly the rich areas around the ‘Teapot’ asterism of Sagittarius are starting to set although the bright open clusters M22 and M23 are still available.

Looking west we find the brilliant Arcturus just 10° above the horizon as the spring constellations prepare to take their leave. Both Serpens and the bulk of Ophiuchus are still visible though the most southerly portions of the latter have already set. They both contain a number of globular clusters; Ophiuchus has M10 and M12, both of mag +6.6 as well as M9, M14 and M107 that are a little fainter. M5, not far from the Serpent’s head, is one of the brighter examples in the area though it is low in the sky and would benefit from observation earlier in the evening. Still well placed in the west are the two most prominent globulars in Hercules, M13 and M92.

To the north Ursa Major is approaching the meridian although the fainter stars in the east of the group have already reached it. Despite this, that pleasing pair of galaxies M81 and M82 are still more than 30° in altitude. There are a number of NGC designated galaxies nearby but these are all around magnitude +10. The spiral galaxy M101, referred to as the ‘Pinwheel’ for obvious reasons at mag 7.7, can be found close to the boundary with northern Boötes. Ursa Minor and Draco lie to the west of the meridian with the Dragon’s head close to M92. 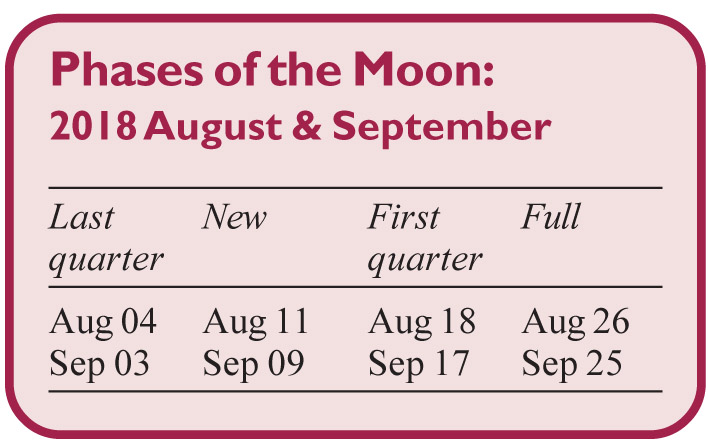 Mercury is technically an evening object at the beginning of August having reached eastern elongation in mid-July. However, it sets at the same time as the Sun which renders it effectively unobservable. Inferior conjunction occurs on Aug 9 after which the planet moves into the morning skies to provide us with one of the best apparitions of 2018. When greatest western elongation occurs, on Aug 26, Mercury rises more than an hour and a half before the Sun and will be 15° in altitude at sunrise. The planet shines at magnitude +0.2 at the time but brightens swiftly as its phase grows although, of course, its apparent diameter is shrinking. On Sep 4 it has reached -1.0 but only lost 2° in altitude and by Sep 9 it is still 10° high at sunrise with a brightness of -1.3, which will aid identification considerably. Mercury continues to move back into the clutches of the Sun to reach superior conjunction on Sep 21.

Venus reaches greatest eastern elongation in the evening sky on Aug 17 when in angular terms it will be 46° from the Sun. Sadly, it has been losing altitude for some time as seen from the UK although our loss is the southern hemisphere’s gain. In the first days of August it is just 12° above the western horizon at sunset and by the time of elongation this has shrunk to 10° although by then, by way of compensation its brightness has grown to -4.3. Sunset on the first and thirtieth of September sees it at an altitude of 7° and 1° respectively, bringing this apparition effectively to a close. Inferior conjunction now awaits Venus in late October.

Earth reaches the autumnal equinox on September 23 at 02:54 BST.

Mars rises around 21:00 BST on Aug 1 as seen from the UK although if you want to observe it in astronomically dark skies you will need to wait until close to midnight. Once again observers in the southern latitudes will have a far better view of the red planet than those in the north because from the UK its greatest altitude during the current period will be 16°, which will come at the end of September. The problem is that Mars has a large negative declination, approximately 26°, which currently places it 6° below the ecliptic. Mars’ brightness will fall from -2.8 to -1.3 and its apparent size will decrease from 24.3 to 15.9 arcseconds during August and September. It continues to move retrograde in Capricornus until Aug 24 when it crosses briefly into Sagittarius and then reaches its second stationary point on Aug 28, after which it reverses and assumes direct motion again re-crossing the constellation border in the process.

Jupiter is still in Libra and moving direct, though it is gradually being swallowed up by the twilight. As the period commences it is 17° high in the south west at the end of civil twilight (Sun 6° below the horizon) and will set just before midnight. By the end of the period the gas giant will set at 20:00 BST as seen from Greenwich.

Saturn now rises in daylight having been at opposition in late June. On Aug 1 it culminates at 22:30 as seen from the UK and then two hours earlier on Sep 1 at an altitude of 16°. The good news is that at subsequent oppositions Saturn’s altitude will begin to show an improvement although this will be a gradual process. The ringed planet has been moving retrograde in Sagittarius since mid-April but on Sep 6 it reaches its second stationary point and once again resumes easterly progress. The planet’s north pole is now inclined to us at 26.6° giving us our best views this year of the upper surface of the ring system. Saturn’s largest moon Titan is best seen to the west of the planet on Aug 9 & 25 as well as Sep 10 & 26. It is at eastern elongation on Aug 1 & 17 plus Sep 2 & 18.

Uranus has at last left the confines of Pisces and moved across the border into neighbouring Aries, where it remains until 2023. It does however make a brief return to its old home in early 2019 during its retrograde phase which begins this year on Aug 7. At the beginning of the period it rises a little before midnight but fails to culminate before sunrise. By the end of September it culminates a little after 02:00 BST at a useful altitude of 50°.

Neptune is 45° to the west of Uranus, amongst the stars of Aquarius, so rises at 22:00 as the period begins, culminating at 03:30. However, by the end it rises in daylight to arrive due south a little before midnight at an altitude of 31°. The ice giant reaches opposition on Sep 7 when it shines at magnitude +7.8 and has an apparent diameter of 2.4 arcseconds. 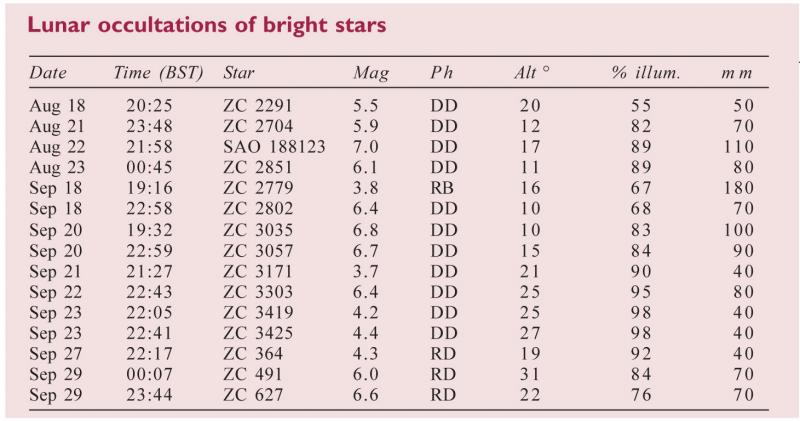 Pluto is still within the confines of Sagittarius not too far from the ‘Teaspoon’ asterism. In early August it culminates at around midnight BST and in early September this has become 21:30 BST. (1)Ceres begins the period in Leo setting two hours after the Sun. It moves into neighbouring Virgo soon afterwards, but the Sun is also in Leo so the dwarf planet is quickly lost in the solar glare.

In the table I’ve listed events for stars of magnitude 7.0 or brighter although there are many others that are either of fainter stars or those whose observation may be marginal due to elevation or other factors. DD= disappearance at the dark limb, RD= reappearance at the dark limb whist DB or RB indicate an event at the bright limb. There is a column headed ‘mm’ to indicate the minimum aperture required for the event. Successful observations of these events should be reported to Tim Haymes at occultations@stargazer.me.uk. Times are in BST

Two graze events occur during August and September. Observers are encouraged to attempt these events and submit results, negative as well as positive, to Tim Haymes as above. More details are available in the current BAA Handbook.

The Perseids are, of course, the main attraction during August with maximum predicted for Monday Aug 13 at 02:00 BST. Fortunately this year the Moon will play no part at all on that date as it will be just past new and will set less than an hour after the Sun. ZHR predictions are for 80+ and with luck many will be fast and bright events leaving ionised trains. Observations should be sent to Dr John Mason at docjohn @dircon.co.uk.

A number of minor showers are active with maxima occurring during the period in question. The maximum of the northern component of the delta Aquarids occurs on Aug 6 with a ZHR of 10. A waning crescent Moon in Taurus will rise a little after midnight BST. The alpha Capricornids are at their most active on the night of Aug 2/3 when a waning gibbous Moon will rise soon after 23:00 BST, but predictions are for a ZHR of just 5.