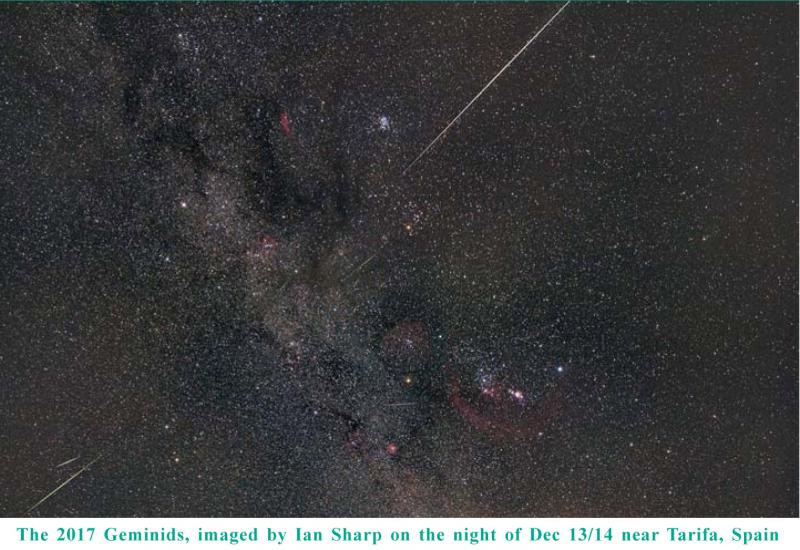 In the south, the meridian provides the boundary between the faint, sprawling constellations of Cetus and Eridanus – now on the wane – and the glittering winter groups that are now in the ascendancy, providing a great contrast. Taurus straddles the meridian, whilst Orion and the remainder of his retinue lie just to the east. Capella, in Auriga, lies just 7° from a position at the zenith, the honour of which currently belongs to neighbouring Perseus.

Many depictions of the constellations show the bright star Alnath as belonging to both Auriga and Taurus but it is in fact a member of the latter, designated as b Tauri. The area in and around Auriga contains a number of open clusters, with the brightest being M37 at magnitude +5.6. M35 is slightly brighter (+5.1) and sits at the feet of the celestial twins (Gemini).

The night sky’s brightest member, Sirius, is almost 20° in altitude as seen from Greenwich, whilst 4° below it is the bright open cluster, M41. At magnitude +4.5, this is a naked-eye object that is best seen from latitudes further south. Those old photographic staples, the Pleiades (M45) and the Orion Nebula (M42), are both well positioned – particularly the former; just west of the meridian.

Looking west, the head of the flying horse (Pegasus) has already set. Despite this M31 is still at a good elevation, with the outstretched lines of stars that form Andromeda pointing to the zenith. Those lines, of course, lead us to Perseus whose sword handle is perfectly placed to display the Double Cluster.

The northern aspect sees Vega and Deneb moving towards the horizon, although only the former will set at Greenwich. Ursa Minor points down towards the northern horizon and Draco, with the dragon head down on the meridian. The larger Bear (Ursa Major) is now beginning to climb to the east of the pole, whilst Cassiopeia and Cepheus descend to the west. If you haven’t yet identified the faint stars of Camelopardalis then now would be a good time to do so, as it lies due north and close to the zenith.

Towards the east Leo is now visible, as is its tiny companion Leo Minor, which was added by Hevelius in 1687 despite having no obvious form to speak of. It contains a number of galaxies, but none are brighter than mag +10. To the west of Leo is Cancer, which has two notable open clusters: M44 (the Praesepe) and M67 (one of the oldest known) within its boundaries. 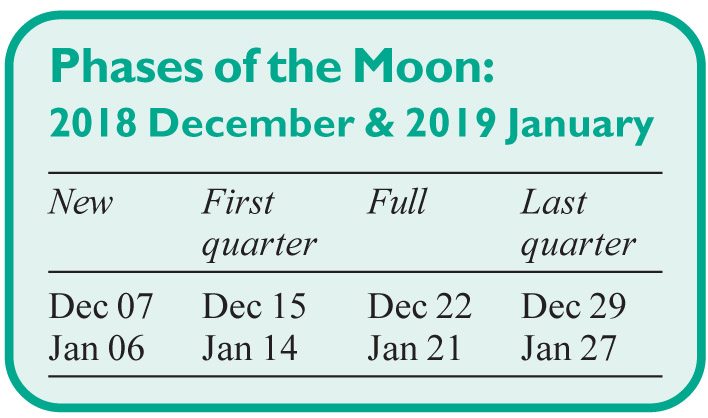 Mercury reaches greatest western elongation on Dec 15 when, in angular terms, it is 21° from the Sun. It is visible low in the southeast at the beginning of civil twilight and passes just north of the considerably brighter Jupiter on Dec 21. The smallest planet therefore begins 2019 moving back towards the Sun, to reach superior conjunction on Jan 30.

Venus rises more than three hours before the Sun in early December, following inferior conjunction in late October. The planet continues to increase its distance from the Sun until it reaches greatest western elongation on Jan 6, when the two will be separated by 47°. On that date – despite its considerable elongation – it is visible for a little under four hours before sunrise, thanks to the shallow angle that the ecliptic makes with the horizon. Venus then moves gradually back towards the Sun, reaching superior conjunction in mid-August. There will be no inferior conjunction in 2019.

Mars begins the period moving direct in Aquarius where it has a close encounter with Neptune on Dec 7, passing just 0.04° north of the ice giant. Then on Dec 21 it crosses the border into neighbouring Pisces, where it remains until early February. Throughout these two months the red planet’s declination becomes less and less negative until, on Jan 2, it crosses the celestial equator and this figure becomes positive once more. As the New Year is ushered in, Mars crosses the meridian due south with an altitude of 39°. By now the planet’s apparent size and brightness have fallen away, to leave a disk just 7.6 arcsec across at a magnitude of +0.4.

Jupiter reached solar conjunction at the end of November and so, for observers in the northern hemisphere, it is too close to the Sun for observation until late December. Then it may be glimpsed low in the southeast just before sunrise. As January passes, Jupiter moves out of the solar glare to the extent that, by the end of the month, it rises three hours ahead of the Sun. On Jan 22 it lies just over 2° south of the much brighter Venus and on the last day of January the two planets are 8° apart, with a slender waning Moon between them providing a pleasing photo opportunity.

Saturn is still an evening object but moves into the solar glare at the beginning of December, being just 8° high in the southwest, with the Sun 6° below the horizon. Visibility is very limited with solar conjunction reached on Jan 2. By the end of the period the ringed planet will rise a little over an hour before the Sun, although at magnitude +0.6 it will be hard to locate in a brightening sky.

Uranus is initially moving retrograde in Aries, but after a few days it crosses the border into Pisces where it continues in a westerly direction until Jan 6, when it arrives at its second stationary point. It then changes to direct motion and moves back towards the border, to cross once again into Aries in the first week of February.

Neptune is still resident in Aquarius and, at the start of December, it culminates at an altitude of 32° in a twilight-free sky. By the end of January it is lost in the solar glow.

Pluto is still located a little to the east of the ‘Teaspoon’ asterism in Sagittarius and, at the start of December, it sets shortly after the arrival of astronomical darkness. The dwarf planet is soon overtaken by the Sun and reaches solar conjunction on Jan 11. 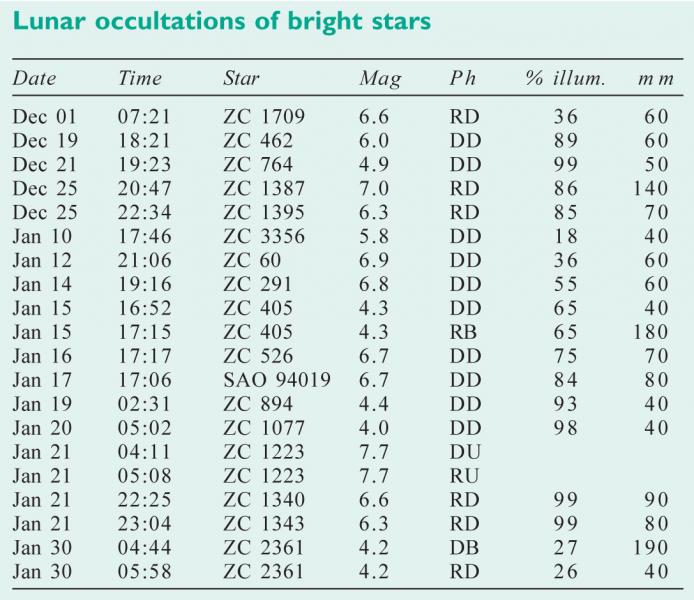 In the table I have listed events for stars of magnitude +7.0 or brighter, although there are many others that are either of fainter stars, or whose observation may be marginal due to elevation or other factors. DD= disappearance at the dark limb, RD= reappearance at the dark limb whilst DB or RB indicate an event at the bright limb. The column headed ‘mm’ indicates the minimum aperture required for the event.

Many tens of events occur during the total lunar eclipse of Jan 21, but predictions are only given for the two brightest that occur while the Moon is in the umbral shadow. Successful observations of these events should be reported to Lunar Occultations Coordinator Tim Haymes at occultations@stargazer.me.uk.

Five graze events occur during December and January. Observers who live close to the graze tracks or who are able to travel are encouraged to attempt these events and submit results, negative as well as positive, to Tim Haymes at the e-mail address given above. More details are available in the current BAA Handbook.

A total lunar eclipse occurs in the early morning of January 21, when the Moon passes through the northern section of the Earth’s umbral shadow. The times for Greenwich are as follows:

P4:       Moon leaves the penumbra at 07:48; as seen from Greenwich the Moon will be just over one degree in altitude at this time.

The Geminids are the year’s most prolific shower, with an expected zenithal hourly rate (ZHR) of over 100. Activity lasts from December 8–17, with the maximum this year taking place on Dec 14 at 08:00 UT. The meteors travel comparatively slowly, at approximately half the speed of the August Perseids. A close to first quarter Moon in Aquarius will set at 23:00 UT as seen from Greenwich.

The Ursids are active from Dec 17–25 and reach maximum activity on the night of Dec 22/23, when up to 10 events per hour would be expected given ideal conditions. However a full Moon on the Orion/Gemini border will make observation difficult this year. This is a shower for which observations are badly needed.

The Quadrantids usher in the new observing year and run from Jan 1–6, with peak activity on Jan 4 at 03:00 UT. The ZHR at maximum is predicted to be in the region of 80, and with the Moon almost new it will have no effect on fainter events.

Observations of any of the above should be sent to Meteor Section Director Dr John Mason at docjohn@dircon.co.uk