In the east Arcturus is 20° in altitude with Corona Borealis just a little below it. Both Hercules and Virgo have yet to completely clear the horizon as they prepare to become summer constellations once again. Just over 10° north of Arcturus lies M3 (NGC 5272) which is possibly the second-finest globular cluster visible from the UK (see front cover image). At magnitude 6.3 it is at the absolute limit of naked eye visibility, although binoculars will easily show it, whilst apertures of around 120mm will resolve it comfortably. Between the stars of Virgo and the tail of the Great Bear lies the faint constellation of Coma Berenices which contains the north galactic pole as well as, on a more temporary basis, the dwarf planet Makemake at mag 16.9.

To the south we find Cancer on the meridian with the open cluster known as either the Beehive or Praesepe culminating at an altitude of nearly 60°. As with many open clusters it covers a comparatively large area of the sky, and in this case it spans some 95 arcminutes. Below Cancer and also on the meridian lies the head of Hydra (the Water Snake) whose body winds south-eastwards until it disappears below the horizon. If you have a good southerly aspect look to see if you can find the two most northerly of the bright stars in Puppis, which represents the poop deck of the ship Argo Navis. This was, in mythology, the vessel that Jason and the Argonauts used to go in search of the Golden Fleece. The original constellation was so cumbersome that the French astronomer N. L. Lacaille divided it into three separate entities.

Looking to the west we find Orion and his retinue are all still visible, though Canis Major will soon set taking with it the large open cluster NGC 2362. To the east of Orion lies the faint and shapeless form of Monoceros where there are a number of open clusters and nebulae, NGC 2232 and NGC 2264 being good examples of each, but no bright galaxies. Capella lies due west at this time but is still 55° in altitude.

Towards the north we find that two members of the Summer Triangle, Deneb and Vega are both visible close to the horizon. Above them Cepheus and Cassiopeia occupy the sky to the west of the meridian whilst to the east of it lie Draco and the two bears. Ursa Major is heading towards the meridian and is almost at the zenith, whilst on the other side of the overhead point lies the faint constellation of Lynx. It has only one star with a Bayer classification, Alpha at mag 3.1, which explains why it is so inconspicuous. The famous Double Cluster, between Perseus and Cassiopeia, is still moderately well positioned at an altitude of 40° in the north west.

Mercury is technically still a morning object at the beginning of February but realistically it is too close to the Sun for observation and will reach superior conjunction on Feb 17. After that it moves east of the Sun to become an evening object and provide one of this year’s best views of the smallest planet. Greatest elongation (of 18°) occurs on March 15 with the planet 11° high and due west at the end of civil twilight. Mercury then moves swiftly towards inferior conjunction which occurs on April 1.

Venus was in conjunction with the Sun early in January, and is now moving gradually into the evening sky, although by the end of February it will be just 4° high with the Sun 6° below the horizon. By the end of our period Venus will have an elevation of 11° in the west at the end of civil twilight. Greatest elongation will not occur until mid-August, although the planet will be best seen in May and June when it is at its furthest north of the celestial equator.

Earth reaches the spring equinox in the northern hemisphere on March 20 at 16:15UT, when the Sun crosses the celestial equator moving north.

Mars rises four and a half hours ahead of the Sun at the beginning of the period and will be 18° high and close to the south when the Sun is 6° below the horizon. The red planet is a long way below the celestial equator and unfortunately this state of affairs will only get worse as it heads towards opposition in late July. Mars is in Scorpius at the beginning of February but is only there a few days before moving swiftly eastwards across Ophiuchus to cross the border into Sagittarius on March 10. The planet is brightening all the while and will have risen in magnitude from +1.2 to +0.3 during these two months. During that same period its apparent size increases from 5.6 to 8.3 arcseconds.

Jupiter is essentially a morning object spending all of February and March within the confines of Libra, with a visit from the Moon on March 7 when it will lie some 4° north of the planet. It begins the period rising at 02:00UT as seen from Greenwich but by the end it has become an evening object clearing the horizon a little after 23:00UT. Jupiter suffers from the same problem as Mars, in that its declination is negative (currently -17°) and this sadly will not change for a few years to come. It will be 2023 before Jupiter’s declination is once more positive at the time of opposition. The gas giant is growing in both brightness (2.2) and apparent size (39.4 arc seconds) on March 1 as it approaches opposition on May 9.

Saturn is also now emerging into the morning skies and beginning to pull clear of the Sun. It spends the month in Sagittarius although obviously, from the constellation’s position, you can tell that it is also poorly positioned for those of us in the northern hemisphere. In fact Saturn has a declination of -22° which means that even when it culminates it has an altitude of just 17° when viewed from Greenwich. The planet will be a challenge for both visual observers and imagers. By the end of March Saturn will rise at 03:00 as seen from southern England, so by the beginning of civil twilight it will be 15° high in the SSE shining at mag +0.5.

Uranus is an evening object in Pisces and at the start of the period can be observed in a dark sky while still at a reasonable altitude of 40°. On the night of March 28 a much brighter Venus will be a quarter of a degree to the south to aid identification.

Neptune is an evening object in Aquarius where it resides for the period and indeed for a number of years to come. At the beginning of February it can be seen in a reasonably dark sky (Sun -15°) in the WSW at an altitude of 10°. On the evening of Feb 21 Venus is just over half a degree to the south. The Ice Giant will be in conjunction with the Sun in early April. 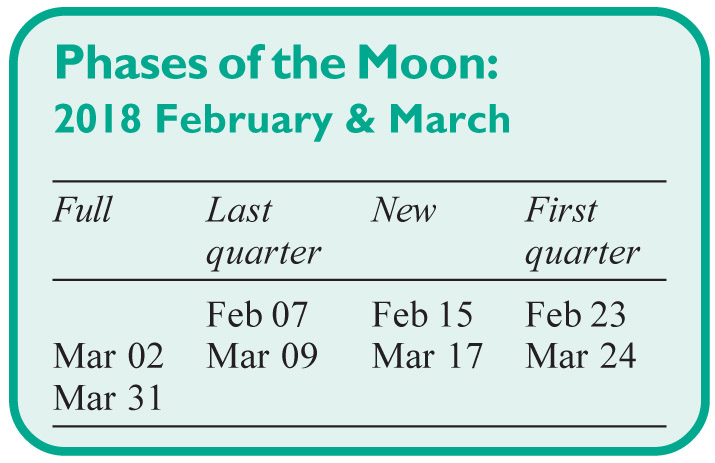 Pluto can still be found within Sagittarius although it is rather close to the Sun during February. By the end of March it rises three hours before the Sun although it will always be poorly placed from the UK in terms of altitude.

(1)Ceres is in Cancer and therefore well positioned for observation although its brightness is now decreasing and by the end of the period is +7.8. In early March it culminates, due south, at 22:00UT with an altitude of 70°. 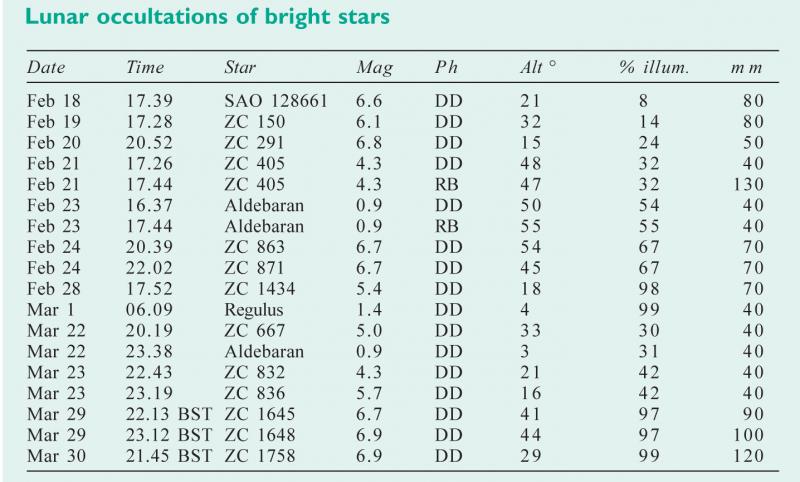 In the table I’ve listed events for stars of magnitude 7.0 or brighter although there are many others that are either of fainter stars or those whose observation may be marginal due to elevation or other factors. DD = disappearance at the dark limb, RD = reappearance at the dark limb while DB or RB indicate an event at the bright limb. The column headed ‘mm’ indicates the minimum aperture required for the event.

The Moon passes through the Hyades in both February and March though neither is observationally ideal. The February event occurs mostly during daylight and the March one sees Aldebaran disappear at the dark limb just thirty minutes before it sets. Times are for Greenwich and in UT unless otherwise stated. Please report observations of these events to Tim Haymes using the e-mail address given in ‘Graze Occultations’.

Four graze events of interest occur during March. Observers are encouraged to attempt these events and submit results, negative as well as positive, to Tim Haymes at tvh.observatory@ btinternet.com. More details can be found in the current BAA Handbook.