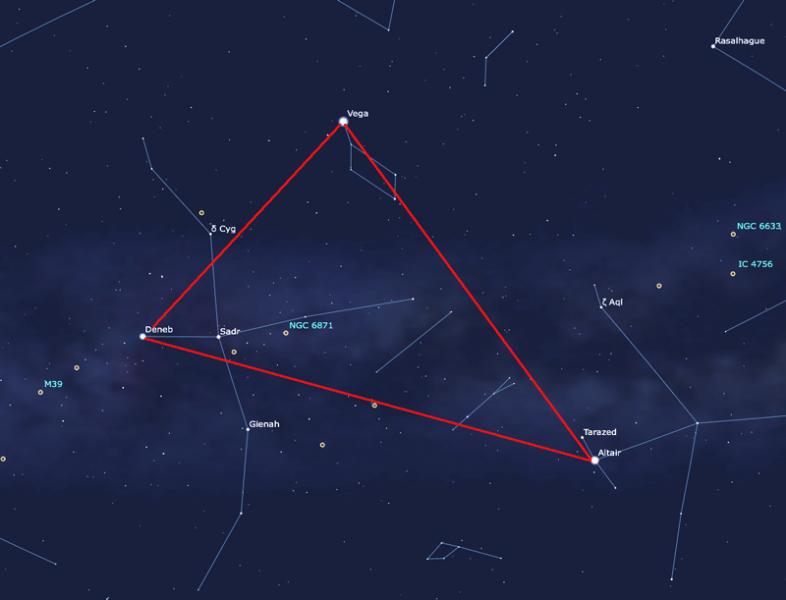 If we look east we can see that all three members of the Summer Triangle have risen along with a group of small and faint constellations that fill the void between Cygnus and Aquila. Equuleus is the nearest to the horizon and closest to the head of Pegasus, the mythological winged horse, which is as expected given that its name means ‘little horse’. Then, moving north, we pass through Delphinus, Sagitta and Vulpecula, the latter of which has more interesting objects than you would expect given its diminutive size. It contains a number of open clusters, the brightest being NGC 6940 at magnitude 6.3. It is also home to the ‘dumbbell’ nebula, otherwise known as M27, somewhat fainter at mag 8.1.

In the south Hercules is on the meridian with Boötes and Corona Borealis slightly to the west. Hercules is faint and indistinct so it is useful to be able to locate it easily. The simplest way is to imagine a line drawn from Arcturus through Alphekka (a CrB) and continue it generally north-eastwards. This will bring you to the faint quadrilateral known as the ‘Keystone’ which forms the lower part of the strong man’s body. Incidentally, he is always drawn ‘upside down’ with his head close to the stars of northern Ophiuchus. Below Corona Borealis we find Serpens Caput which forms the head of the Serpent whose dismembered tail, Serpens Cauda, lies on the opposite side of Ophiuchus. Within the head lies the globular cluster M5, at magnitude 5.8. The tail section contains M16, also known as the Eagle Nebula, which is home to the ‘Pillars of Creation’. Closer still to the horizon is the group of stars that form the head of Scorpio, of which the brightest is Antares, whose name means the ‘Rival of Mars’.

Towards the west Leo, which currently contains the planet Venus, is preparing to set. Virgo just to the east of the Lion will soon follow suit. Several of the area’s globular clusters are still well placed like M53 in Coma Berenices at mag 7.7 and M3 in Canes Venatici at mag 6.4.

In the north the bright star Capella (in Auriga) is close to the horizon and approaching the meridian whilst on the opposite side of the north celestial pole, Ursa Minor stretches towards the zenith. The head of Draco lies close to the overhead point allowing the twists and turns of the Dragon to be more easily followed. Cassiopeia and Cepheus both lie to the east of the meridian and contain a number of objects of interest. Within Cassiopeia we find not only a number of mag 6 and 7 open clusters but also the Heart and Soul nebulae. Cepheus contains the Elephant’s Trunk nebula which should be visible to the naked eye under good conditions, and the Iris nebula which is of the reflection variety.

Mercury reaches superior conjunction on June 6 after which it moves east of the Sun to become an evening object low down in the west after sunset. It will reach greatest eastern elongation on July 12 when, in angular terms, it will be 26° from the Sun at magnitude +0.5. On that day at sunset it will be 9° in altitude as seen from London, and will set just over an hour after the Sun. However, due to the variations in the position of the ecliptic, Mercury will be at greater altitude in the days before elongation is reached. As an example, on June 26 it will be more than 11° high at sunset as well as being brighter at mag -0.3. It will also help a little that the planet is almost 2° north of the ecliptic at that time. Following elongation Mercury swiftly moves back into the clutches of the Sun to reach inferior conjunction in early August.

Venus remains prominent in the west at dusk although it suffers in the same way as Mercury thanks to the angle the ecliptic makes with the horizon at this time of the day and year. At the start of June it is 22° above the western horizon at sunset, setting more than two and a half hours after the Sun. By the end of July it is only 13° in altitude at sunset although, by way of compensation, it has increased in brightness from -4.0 to -4.2 and in apparent size from 13.1″ (13.1 arcseconds) to 20.2″ with a phase of 57%. On July 9 Venus passes 1° north of the first magnitude star Regulus in Leo.

Earth reaches the northern hemisphere summer solstice on June 21 at 11:07 BST. It then arrives at aphelion, its greatest distance from the Sun, on July 6 at 17:48 BST when the two bodies will be 152.1 million kilometres apart.

Mars begins the period as an evening object but will rise before midnight by late June. It spends all of June and July within the confines of Capricornus and on June 28 it reaches its first stationary point, after which it assumes retrograde (east to west) motion. The red planet will arrive at opposition a month later on July 27 although its closest approach to Earth will occur three days after this. At the time of opposition it will present a disk 24.3″ across and will shine at a very respectable mag -2.8. However, those in the southern temperate latitudes will have the best views; whilst those in the UK will always suffer with the planet’s limited altitude. It is unfortunately a long way south of the equator and also a little south of the ecliptic which itself currently hugs the horizon. On the night of opposition it culminates at a little after 01:00 at an altitude of just 13°. A waning gibbous Moon passes 4° north of Mars on July 1.

Jupiter was at opposition in early May, so as the period begins it is visible through most of the hours of darkness and due west at 23:00. It too suffers from low altitude although it fares better than Mars, being 24° above the horizon at its best. The gas giant continues to move retrograde but only until July 11 when it reaches its second stationary point and then resumes direct motion once more. However, it does not leave the confines of Libra where it has resided since mid November. The brightness of Jupiter slips from -2.4 to -2.1 during June and July as its apparent size falls correspondingly from 44″ to 38″. A waxing gibbous Moon is close by on June 23 and July 20.

Saturn has now technically become an evening object, rising at 23:00 at the start of the period, although it is best seen in the early hours of the morning. It suffers in the same way as Mars and Jupiter with limited altitude thanks to the position of the ecliptic and a negative declination of more than 20°. It will come to opposition on June 27, transiting the meridian due south at 01:00 when it will be just 16° above the horizon as seen from Greenwich. At that time Saturn will be just over 9 au from the Earth. The planet’s north pole continues to be tilted towards the Earth, the angle increasing slightly during June and July, providing superb views of the ring system. If you would like to observe Saturn’s largest moon, Titan, then it is best seen at western elongation on June 7 and 23 as well as July 8 and 24. It will be best placed east of the ringed planet on June 1 and 15 and July 1 and 16. 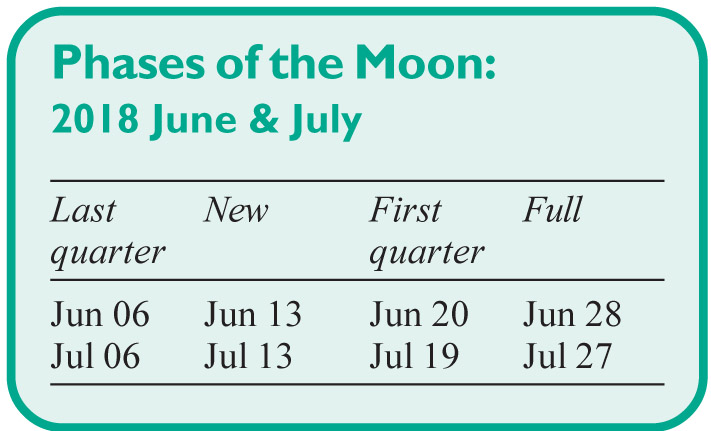 Uranus is a morning object in Aries having left behind long term residency in Pisces. By the end of July it will be possible to observe it in a dark sky at an altitude of 25° to 35° in the early hours.

Neptune spends the period in Aquarius, as a morning object initially rising three hours ahead of the Sun, although by the end of June it rises at 22:00. It reaches its first stationary point on June 19 and then moves retrograde until late November.

Pluto rises at midnight at the beginning of June amongst the star fields of Sagittarius. Its position there tells you that it will not be well placed for identification.

(1)Ceres is visible amongst the stars of Leo in the evening skies, passing within 10 arcminutes of epsilon Leonis on June 1. Despite its direct motion, the Sun is slowly overhauling it and by the end of July it sets just over two hours after the Sun.

In the table I’ve listed events for stars of mag 7.0 or brighter although there are many others that are either of fainter stars or those whose observation may be marginal due to elevation or other factors. DD = disappearance at the dark limb, RD = reappearance at the dark limb whist DB or RB indicate an event at the bright limb. There is a column headed ‘mm’ to indicate the minimum aperture required for the event. Successful observations of these events should be reported to Tim Haymes at occultations@stargazer.me.uk. Please note that during the Lunar Eclipse of July 27 there are a large number of occultations of faint stars that typically have magnitudes in the range of +9 to +12. Times are in BST

Two graze events occur during June and July. Observers are encouraged to attempt these events and submit results, negative as well as positive, to Tim Haymes at occultations@stargazer.me.uk. More details are available in the current BAA Handbook.

A total lunar eclipse will take place on July 27 with the Moon first entering the penumbral shadow at 18:14. Then first umbral contact occurs at 19:24 with maximum immersion at 21:22. The Moon will have left the Earth’s umbra by 23:19 and the penumbra by 00:28.

As seen from Greenwich the Moon will rise at 20:50 by which time the Moon will have been fully immersed in the Earth’s umbra. All times are BST. It should be an interesting sight to see the fully eclipsed Moon rising and there are sure to be images of it as it appears amongst urban and rural landscapes.

The Capricornids are thought to have three maxima, on July 9, 16 and 26 when ZHRs are expected to be in the order of  5. A nearby Moon in Sagittarius will interfere on the last of these dates.

The delta Aquarids have two radiants providing maxima on two different dates, but only the first of these occurs during the current period. The initial maximum takes place on July 29 when ZHRs are expected to be around 20, although the radiant will not rise until 22:30 BST. An almost full Moon in Capricornus will seriously interfere with observations.