In the east, the winter groups are beginning to show their hand with Taurus, Orion and Gemini now clear of the horizon. The stars in Orion’s belt point northwards to Aldebaran, an example of a K5 III star that has evolved off the main sequence in the Hertzsprung-Russell diagram. The Pleiades, the precursors of winter weather, are already at an altitude of 45° as is the bright star Capella.

For the enthusiast of open clusters there is plenty of choice in and around Auriga. Apart from the familiar trio of M36, M37 and M38 there are a number of NGC objects, the brightest of which is NGC 2281 at magnitude +5.4. Don’t forget M35 at mag +5.1 just over the border in Gemini.

Towards the south we find the large but indistinct shape of Cetus on the meridian, whilst above it the two fish of Pisces envelope the east and south of Pegasus. Cetus is home to Mira ‘The Wonderful’, also known as omicron Ceti and one of the earliest variable stars to be discovered. With a period of 332 days, not only does its brightness vary, but its brightness at successive maxima and minima also varies. The magnitude range is from +2 to +10. The next maximum is predicted on November 26, which finds Mira well placed for observation, being on the meridian due south at 22:00 UT with an altitude of 35°. Andromeda straddles the meridian, with M31 – and its two immediately attendant satellite galaxies – at an enviable altitude of 80°.

Looking west, that area of sky is dominated by the Summer Triangle although it is well past its best, with Altair (the closest to the horizon) being just 18° from setting. North of Aquila lies Cygnus and between the two birds can be found the small constellations of Sagitta (the arrow) and Vulpecula (the fox).

The former has few deep sky objects within easy reach of amateur telescopes, with M71 – a globular cluster at magnitude +8.5 – being the brightest. There are also a number of planetary nebulae which range from 10th to 12th magnitude. Vulpecula has more of interest including, of course, the asterism known as ‘The Coathanger’ or, more properly, Collinder 399. There are a number of open clusters, the brightest of which is NGC 6885 at mag +6.00, but no easily observable galaxies due to Vulpecula’s proximity to the galactic plane. There is one planetary nebula, M27, but at mag 7.6 it would benefit from the application of an aperture around 250mm. 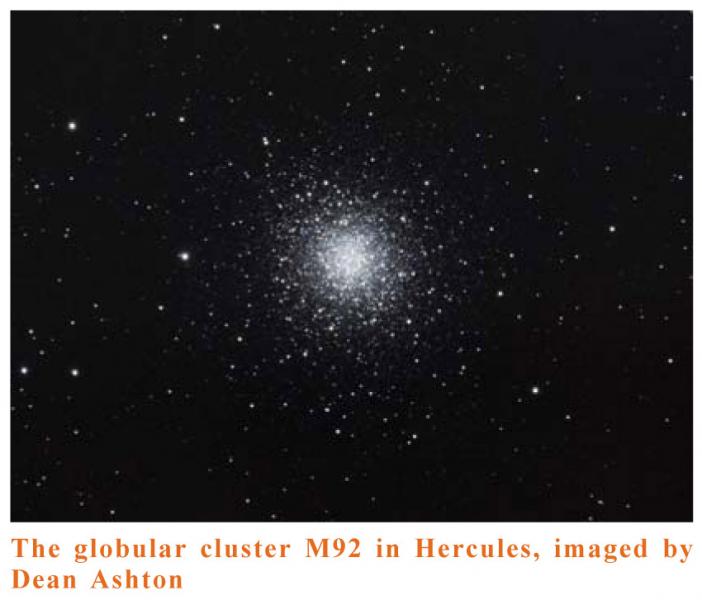 At this time of year the Milky Way appears almost due west on the horizon and passes through this area, providing rich pickings for those who take pleasure from scanning with nothing more than a pair of binoculars.

The northern horizon sees Ursa Major close by as it straddles the meridian below the pole. The angle of the Bear’s tail tells us that Arcturus is below the horizon with most of Hercules soon to follow, although from the south of the UK, M92 – the strong man’s no.2 globular cluster – is just circumpolar. The position of the Bear also tells us that Cassiopeia must be on the meridian, and she does in fact at this time have the zenith within her boundaries.

Mercury reached superior conjunction at the end of September, so at the start of the period the planet is just emerging into the evening skies. However, despite greatest elongation of 23° being reached on Nov 6 the planet is only 4° high at sunset, passing below the horizon itself (as seen from Greenwich) just forty minutes later. The view from the southern hemisphere will be far superior. Mercury then moves briskly back towards inferior conjunction, which it reaches on Nov 27.

Venus was at greatest eastern elongation in mid-August and is still, in angular terms, a long way from the Sun (32°) on Oct 1. Despite this, the planet’s negative declination means that it sets just ten minutes after the Sun on Nov 1 and, within a few days, actually sets ahead of the Sun despite a sizeable elongation. Venus then moves westwards to an inferior conjunction on Oct 26 and onward into the morning skies where it quickly makes its presence felt. By the middle of November it rises almost 2½ hours before the Sun. At that time it is almost 20° in altitude and shines at magnitude -4.6 at sunrise.

Mars is still a prominent evening object in Capricornus as the period begins although its swift direct movement carries it across the border into Aquarius on Nov 11. Early in October the red planet is on the meridian at an altitude of 16°. By the end of November this has increased, at culmination, to a more respectable 30°; though, of course, its apparent size and brightness have both fallen. A gibbous Moon is close by on Oct 18 & Nov 16.

Jupiter is still an evening object and can be found low down in the south-west soon after sunset. At the start of the period it is just 7° above the horizon at the end of civil twilight, although it still shines at a respectable magnitude of -1.8. The gas giant is currently moving direct and this action carries it across the border from Libra into Scorpius on Nov 20. Its period of visibility is coming to an end and it will reach solar conjunction just six days later. 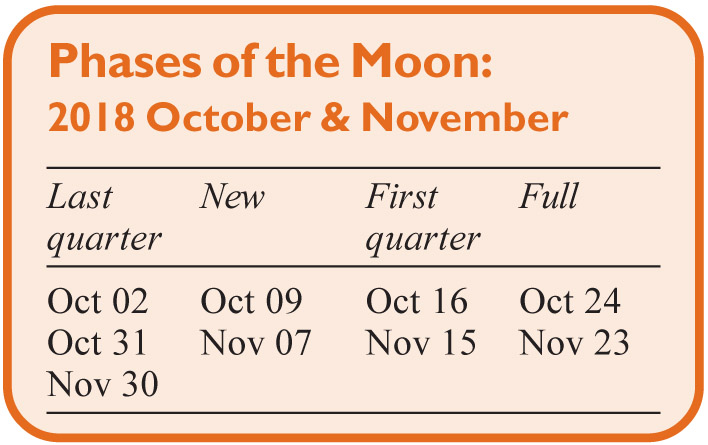 Saturn culminates just after sunset at the beginning of October although its altitude at this time, 16°, leaves much to be desired. It is drawing gradually closer to the Sun and will reach conjunction in early 2019 January. The planet’s ring system remains superbly presented to the Earth, with the tilt a little below the maximum possible. Saturn still resides amongst the stars of Sagittarius and is moving direct, just to the north of the ‘Teapot’ asterism.

Uranus reaches opposition on Oct 24 and is therefore visible throughout the hours of darkness. It is on the meridian due south at a healthy altitude of 50° and shines at magnitude +5.7. Uranus continues to move retrograde in Aries and is soon to re-cross the border back into Pisces, a constellation that had been its home for so long. It will continue to move retrograde until early January next year.

Neptune is currently moving retrograde in Aquarius, although on Nov 25 it reaches its second stationary point and subsequently assumes direct motion. 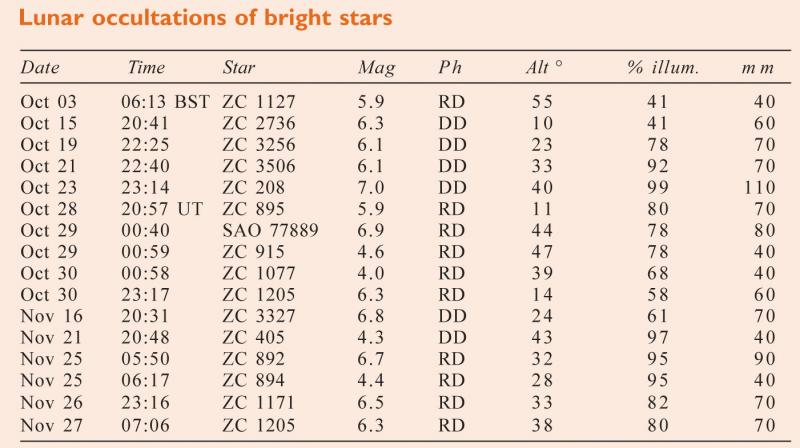 Pluto is still resident in Sagittarius, a little to the west of the ‘Teaspoon’ asterism. At the start of the period it sets, as seen from Greenwich, just before midnight.

In the table on the next page I’ve listed events for stars of magnitude 7.0 or brighter, although there are many others that are either of fainter stars, or whose observation may be marginal due to elevation or other factors. DD = disappearance at the dark limb, RD = reappearance at the dark limb whilst DB or RB indicate an event at the bright limb. There is a column headed ‘mm’ to indicate the minimum aperture required for the event.

Successful observations of these events should be reported to Lunar Occultations Coordinator Tim Haymes at occultations@stargazer. me.uk.

There is just one graze event occurring during the October & November period. Observers who live close to the graze track are encouraged to attempt this event and submit results, negative as well as positive, to Tim Haymes at the e-mail address given above. More details are available in the current BAA Handbook.

The Draconids are active from Oct 7-10, with the maximum predicted for Oct 8 at 23:00 UT with a ZHR of 20. At that time the radiant will be approximately 40° above the north western horizon. There will be no interference from the Moon as it will be new on the following day.

The Orionids can be seen from Oct 16-30 and are due to reach a flat peak between Oct 21 & 24. Unfortunately a full Moon will be nearby on Oct 24. The Taurids have a double radiant with peaks on November 5 & 12, although events are possible anytime between Oct 20 & Nov 30. On occasions enhanced rates of fireballs have been seen. The Moon will not significantly impact on either of the maxima, for which ZHRs of 10 are expected.

The Leonids are predicted to peak at 01:00 UT on Nov 18, with the normal limits being Nov 15 & 20. A ZHR of 20 is possible: there is always a degree of uncertainty, although enhanced rates are not expected until the late 2020s. The radiant rises at around 23:00 UT on the night before, as a waxing gibbous Moon prepares to set.

Observations of any of the above should be sent to Meteor Section Director Dr John Mason at meteor@britastro.org.