To the north we see that Cassiopeia is on the meridian, with Perseus and Camelopardalis to the west of her and Cepheus, Lacerta and Cygnus to the east. Ursa Major is north of the pole, on the meridian and close to the zenith although the honour of that location currently lies with Canes Venatici. The present position of the Plough tells us that the photographically attractive pair of M81 and M82 are superbly placed, at an altitude of 75°.

Looking towards the east we see that the strong man, Hercules, is now climbing higher in the sky along with two of the best globular clusters visible in the northern hemisphere: M13 and M92. Just east of Hercules, Vega is already at an altitude of 30° with the second member of the Summer Triangle, Deneb, lagging a little further behind. The last member of the trio is yet to rise, though it won’t be long before the Triangle is complete.

M39 is a moderately bright (mag +4.6) open cluster in Cygnus, consisting of some 30 members and with an angular size similar to that of the full Moon. It was discovered by Le Gentil in 1750 and added by Messier to his list of objects for comet hunters to avoid in 1764. The only other open cluster brighter than magnitude +6 in Cygnus is NGC 6871, with around fifty members. It lies just south of the swan’s neck and about two thirds of the way from Albireo.

Ophiuchus is just struggling clear of the horizon, whilst above it one half of Serpens is gaining altitude – containing the other globular of note in this area, M5. It is thought to contain at least 100,000 stars (although estimates vary wildly) and, with an age of 13 billion years, it is one of the oldest known examples of such a cluster.

In the south, the tail of Hydra is now clear of the horizon and straddling the meridian. Above it – and riding on the sea snake’s back – are the small constellations of Corvus, the crow; Crater, the cup; and Sextans, the astronomical sextant. Corvus primarily consists of a trapezium of faint-but-obvious stars, and has few bright objects of interest to boast of. NGC 4361 is a planetary nebula with a magnitude of +10.3, which benefits from the use of at least 200mm aperture to be even moderately well seen. The area is also home to the Antennae Galaxies, NGC 4038 & 4039, as well as having M104, the Sombrero Galaxy on its northern border. Above them is Virgo with its multitude of galaxies, and further north still are Coma Berenices and Canes Venatici, the latter of which is home to the BAA Variable Star of the Year. This is RS Canum Venaticorum (or RS CVn for short), which is an Algol-type eclipsing binary with a period of 4.8d. More details are available on p. 105 of the BAA Handbook, or via the Variable Star Section page on the BAA website at: https://www.britastro.org/sections.

Turning to the west, only Canis Minor, Gemini and Auriga remain of the Hunter’s entourage. Cancer and Leo take up the southwest as Hydra sprawls below them. Leo itself has a good smattering of galaxies, with the so-called ‘Leo Triplet’ being perhaps the best known and most frequently imaged. They form an isosceles triangle with NGC 3628 at the apex, NGC 3627 to the east and NGC 3623 to the west. All have magnitudes close to +10, but are a photogenic group despite that. 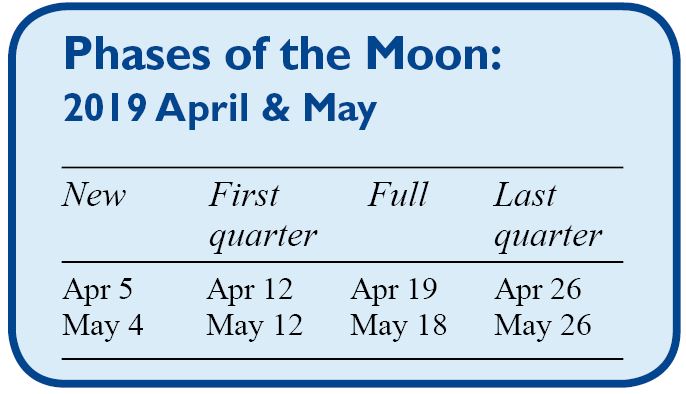 Mercury was at inferior conjunction in mid-March, before it moved into the morning skies. It reaches a greatest elongation on April 11 of a very commendable 28°; its magnitude at that time will be +0.4. However, despite this being the maximum elongation that the planet can achieve it is, to a large extent, wasted on UK observers where it will rise considerably less than an hour before the Sun. This is thanks to the shallow angle that the ecliptic makes with the horizon at this time of the day and year – those lucky enough to view from the southern hemisphere will be far better rewarded. Mercury then moves back towards the Sun to reach a superior conjunction on May 21. By the end of that month it shines at magnitude –1.6 in the southwest, with an altitude of 9° at sunset.

Venus is still a morning object, but as with Mercury it rises less than an hour before the Sun and is best seen from more southerly latitudes, shining brilliantly at magnitude –3.9. Its altitude at sunrise is 7° – something that, from the UK at least, changes very little throughout the period as the variation in the position of the ecliptic is compensated for by the movement of Venus back towards the Sun. It will not reach superior conjunction until mid-August.

Mars continues its long tenure as an evening object, moving swiftly eastwards through Taurus and into neighbouring Gemini on May 16. Despite this direct motion, its elongation from the Sun decreases during the period in question from 49° to 30°. It won’t however reach conjunction until early September. During April and May its brightness falls from +1.4 to +1.7 and its angular diameter slips from 4.6 to 3.9 arcseconds, making it a challenging quarry for imagers and visual observers alike hoping to record surface detail.

Jupiter is progressing further from the Sun, mostly due to the Sun’s easterly movement but also to a minor extent due to Jupiter moving retrograde from April 10 onwards. It is a direction that will continue until mid-August, when the second stationary point is reached. The planet resides in the southern part of Ophiuchus and rises at 02:00 BST as seen from the UK at the beginning of April. By the end of May it is becoming visible in the southeast around 22:00, as it approaches opposition on June 10. During the period covered here it rises in brightness from magnitude –2.2 to –2.6, corresponding to an increase in apparent size from 37 to 43 arcseconds. Sadly, the planet’s negative declination of 22° means that it is never more than 17° above the horizon, so that its period of visibility – as seen from the UK – is bound to be comparatively short.

Saturn is also a morning object, rising a little later than neighbouring Jupiter, and ensconced in Sagittarius where it remains for the rest of the year. The ringed planet suffers lunar occultations on April 25 & May 22 as seen from parts of the Southern Hemisphere. The tilt of its axis remains around 23° with respect to the Earth, providing continuing good views of the upper surface of the ring system. Saturn’s largest Moon, Titan, is best seen to the west of its parent planet on April 6 & 22, as well as on May 8 & 24. To view it to the east, look on April 14 & 30 or May 16. An 80% waning Moon is 2° to the south of Saturn on the morning of May 23.

Uranus begins the period as an evening object in Aries, but is quickly overtaken by the Sun and reaches conjunction on April 23. It then emerges into the morning sky to rise a little over an hour before the Sun by the end of May.

Neptune, in Aquarius, has close encounters with Mercury on April 2 and Venus on April 10, although its proximity to the Sun will make these very difficult events. By the end of the period it rises nearly three hours before the Sun, although it will not be seen in a truly dark sky.

Pluto is still a morning object in Sagittarius, rising more than two hours before sunset in early April. By the end of May it is appearing on the horizon around midnight. 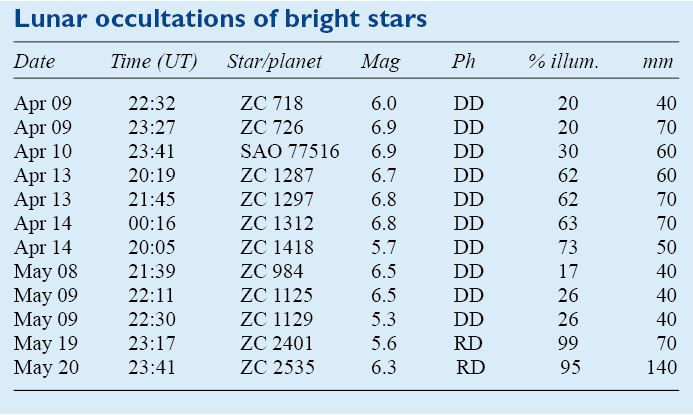 In the table I’ve listed events for stars of magnitude +7.0 or brighter, although there are many others that are either of fainter stars or those whose observation may be marginal due to elevation or other factors. DD= disappearance at the dark limb, RD= reappearance at the dark limb whilst DB or RB indicate an event at the bright limb. There is a column headed ‘mm’ to indicate the minimum aperture required for the event. Observations of these events should be reported to Lunar Occultations Coordinator Tim Haymes at: occultations@stargazer.me.uk.

There are three graze events that occur during April & May. Observers who live close to the graze tracks or who are prepared to travel are encouraged to attempt these events and submit results, positive as well as negative, to Tim Haymes at the e-mail address given above. More details are available in the current BAA Handbook.

This shower is active from April 14–30, with maximum taking place on April 22 at 17:00 BST. The best that can be expected in terms of activity is around 15 events per hour. A waning gibbous Moon in southern Ophiuchus will rise a little before midnight when the radiant is 35° in altitude