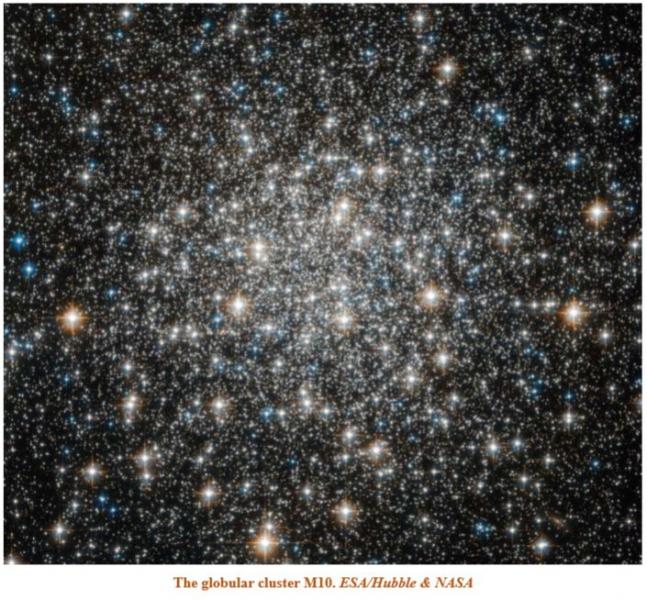 In the east, Pegasus and Andromeda are well clear of the horizon with M31 almost 50° in altitude. Lower in the sky however, the appearance of the Pleiades is an indicator that autumn is almost upon us. The Double Cluster in the sword handle of Perseus and the Heart and Soul Nebulae in neighbouring Cassiopeia are also at a similar altitude.

Some 15° below M31 lies M33, the Triangulum Galaxy – which, rather appropriately, lies within the boundaries of the celestial triangle. In common with M31, it is one of the most distant objects that can be viewed with the naked eye. At magnitude +5.7 it was one of the targets observed by Lord Rosse using the 72-inch ‘Leviathan of Parsonstown’, with which he discovered the spiral nature of such galaxies.

Above Andromeda is the small group of stars that forms Lacerta, the lizard. This constellation ranks 58th in order of size and contains few bright deep sky objects. There are however a number of open clusters, with NGC 7243 & NGC 7209 being the most obvious at magnitudes +6.4 & +6.7 respectively.

Looking southwards the most easterly of the three members of the Summer Triangle, Deneb, has reached the meridian. Directly south of Deneb are the small constellations of Delphinus, the dolphin and Equuleus, the small horse. Both of these belong to the original list of 48 constellations devised by Ptolemy in the second century AD. Whilst, with a little imagination, it might be possible to envisage the stars of Delphinus resembling a leaping dolphin it is in no way possible to see the four brightest stars of Equuleus conjuring up an image of a foal.

Looking a little further south – but still on the meridian – brings us to Aquarius which contains the second object on Charles Messier’s list, M2. This is a fine globular cluster with a magnitude of +6.3.

If you have an excellent southerly aspect then look for the northern section of Microscopium, which is just approaching the meridian and is visible from the southern parts of the UK around this time. Just east of the stellar microscope is the first magnitude star Fomalhaut, in Piscis Austrinus; it is easily located by drawing an imaginary line through the two most westerly stars in the Square of Pegasus and continuing it towards the horizon.

In the west the last vestiges of Virgo are disappearing, soon to be followed by Ophiuchus which houses a large number of globular clusters. The brightest of these are M10 & M12, located centrally in the serpent bearer and both with magnitudes of +6.6. Serpens Caput, the serpent’s head, will be soon lost from view and is taking with it another globular, M5, which some estimate contains half a million stars. Arcturus is also approaching the horizon and at a similar altitude is another globular, M3 (magnitude +6.4), which lies just across the border in Canes Venatici.

To the north, the ‘nose’ of Ursa Major is just on the meridian immediately below the pole, with the popular pair of galaxies M81 & M82 still moderately well placed from the southern UK. The main body of Auriga is now clear of the horizon along with the brilliant Capella, which will ride high in the sky in the depths of winter. Above the pole are the majority of Draco and Cepheus. The latter of these contains a variety of open clusters, the brightest being NGC 7160 at magnitude +6.1. It also accommodates the well-known Elephant’s Trunk Nebula within its boundaries. 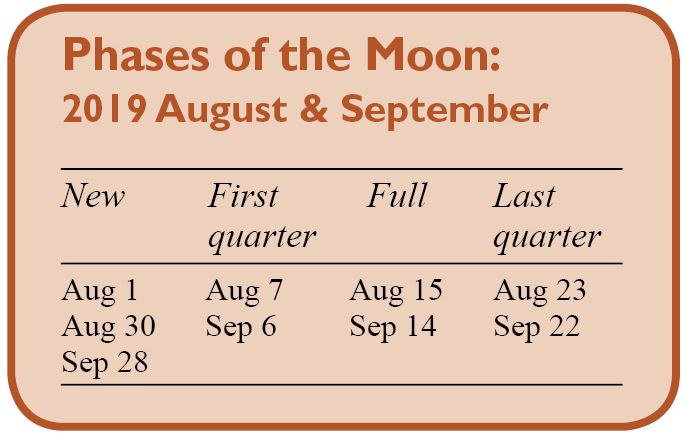 Mercury is a reasonably well-placed morning object, reaching greatest elongation (W) on Aug 9 when it rises one-and-a-half hours before the Sun. However, although its brightness climbs quickly, it moves swiftly back into the solar glare and arrives at superior conjunction on Sep 4. Following that, Mercury moves east of the Sun to become an evening object. The proximity of the ecliptic to the horizon will mean that it is a very poor apparition for UK observers, but it will be one of this year’s best as seen from the southern hemisphere.

Venus is still technically a morning object in early August, but in practice it is far too close to the Sun for observation. Indeed, it reaches superior conjunction on Aug 14, after which it should become visible in the evening skies late in September. At least with a magnitude of –3.9 finding it in the twilight shouldn’t present too great a problem. In any case, the coming apparition will be a good one with Venus being more than 40° in altitude in late 2020 March.

Earth reaches the autumnal equinox on September 23 at 08:51 BST.

Mars is still making its way steadily eastwards, although after a long tenure in the evening skies it is now about to be overtaken by the Sun. The planet was, after all, at opposition in late 2018 July. As the period begins, its elongation is just 10° which equates to the red planet setting around thirty minutes after the Sun, as seen from Greenwich. Solar conjunction occurs on Sep 2, followed by a gradual movement into the morning skies and by the end of September Mars is almost 10° west of the Sun.

Jupiter has been moving retrograde since mid-April, but on Aug 11 it reaches its second stationary point after which it resumes direct (west to east) motion. It spends all of August and September within the confines of southern Ophiuchus, where it remains until mid-November. Identification will not be an issue because the planet, at magnitude –2.4 falling to –2.1, will be by far the brightest object in that part of the sky. Whilst its brightness drops slightly the apparent size also declines, from 42.2 to 36 arcseconds.

Jupiter was at opposition in mid-June so now rises in daylight, making the short journey to the south-western horizon in just eight hours for UK observers. This means that for an observer at Greenwich, Jupiter is visible for just two hours after civil twilight ends on the last day of the current period. Those viewing from south of the Equator will fare slightly better. 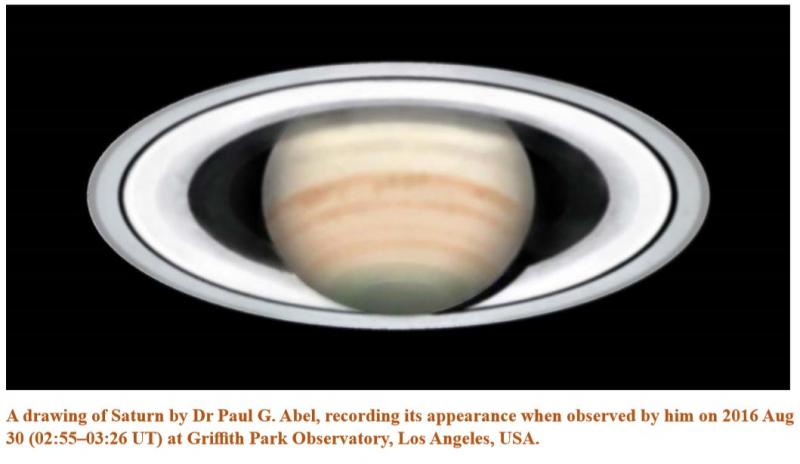 Saturn has also recently passed opposition, in this case on Jul 9. The ringed planet rises in daylight though a little later than Jupiter, culminating at 23:30 BST on the first day of August. One month later it is in the same position soon after 21:15 BST.

Saturn begins the period moving retrograde close to the ‘Teaspoon’ and ‘Teapot’ asterisms of Sagittarius, a direction that lasts only until Sep 18 when it reaches its second stationary point. After this, the planet once more assumes direct motion. The fact that it is in Sagittarius tells you that it suffers the same issues as Jupiter in relation to altitude, culminating at just 17° and with a shortened period of visibility. Its magnitude drops slightly from +0.2 to +0.4, whilst its angular size falls from 18.2 to 16.9 arcseconds (not including the ring system).

Uranus rises a little before midnight at the beginning of August as seen from the UK. It moves direct initially, but on Aug 12 it reaches its first stationary point, after which it moves retrograde until early 2020 January. It is currently in Aries, where it will remain until late 2024 May. It will reach opposition in late October.

Neptune is currently moving retrograde in Aquarius and reaches opposition on Sep 10, when it will be magnitude +7.8. Thanks to being further west on the ecliptic, it rises earlier than Uranus and can be found low down in the east after 22:00 BST.

Pluto lies approximately 6° to the east of Saturn in Sagittarius, where it moves retrograde until early October. 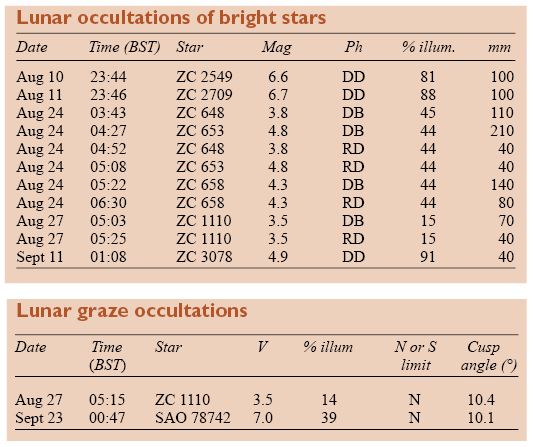 In the table I have listed events for stars of magnitude +7.0 or brighter, although there are many others that are either of fainter stars or whose observation may be marginal due to elevation or other factors. DD= disappearance at the dark limb and RD= reappearance at the dark limb, whilst DB or RB indicate an event at the bright limb. On the morning of August 24 the Moon makes a return to the Hyades cluster providing some bright limb disappearances and dark limb reappearances. There is a column headed ‘mm’ to indicate the minimum aperture required for the event. Times are in BST.

Observations of these events should be reported to Lunar Occultations Coordinator Tim Haymes at: occultations@stargazer.me.uk.

There are only two graze events that occur during August and September. Notably, one of them is of a magnitude +3.5 star whose cusp angle is 10.4°, when the Moon is just 14% illuminated. The mean graze track passes across the UK in a line from Swansea to the Wash.

Observers who live close to the graze tracks or who are prepared to travel are encouraged to attempt these events and submit results, positive as well as negative, to Tim Haymes at the e-mail address given above. More details are available in the current BAA Handbook.

There are a number of minor showers that are active and have maxima during the current period. The Piscis Austrinids reach maximum around Aug 9, while the kappa Cygnids are another shower whose date of peak activity (nominally Aug 14) is rather uncertain. Both of these have a predicted ZHR of 5. Then, on Sep 1 & 10, the alpha Aurigids and the epsilon Perseids reach their respective maxima.

The Perseids are a shower whose boundaries stretch across several months. Activity began in mid-July and continues until Aug 24. Maximum, with a ZHR of 80, takes place on Aug 13 at 08:00 BST so watches on the nights of Aug 12/13 & 13/14 could be advantageous. Sadly, the Moon interferes considerably at the time of maximum, when its phase will be 95%. It will be visible from the time darkness falls on Aug 12 until 03:00 BST on the morning of Aug 13, allowing nearly two hours of moderately dark viewing before the Sun intrudes.

Reports should be sent to Dr John Mason, Director of the Meteor Section, at docjohn@dircon.co.uk