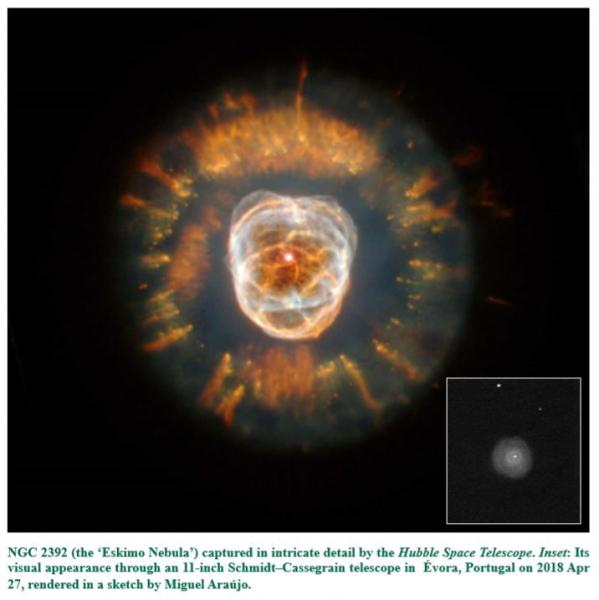 Looking east we see that Leo has now risen, whilst ahead of the lion – travelling westwards along the ecliptic – we find Cancer and Gemini. The former contains M44, often referred to as Praesepe or the Beehive Cluster, which is visited by a waning gibbous Moon in the early hours of Jan 12 when a number of occultations take place.

Gemini, although prominent in its own right, contains few deep sky objects thanks to its position just off the galactic plane. There are however a few nebulous objects, as well as a number of open clusters with a group of them close to the Taurus border. M35 is one such object in that region, lying adjacent to the feet of the twins and with an apparent size of almost half a degree. A near neighbour, though much smaller in angular measurement, is NGC 2129; this cluster is notable for having a comparatively youthful estimated age of 10 million years. Nearby is IC 443, otherwise known as the Jellyfish Nebula; this is a supernova remnant although its age is not certain. It can be found on a line between Tejat and Propus, although it is much closer to the latter. Not to be forgotten is NGC 2392, the Eskimo Nebula, which is a planetary nebula with a central star of magnitude +9.1 and was discovered by William Herschel in 1787.

Below Gemini we find one of Orion’s retinue. Canis Minor, the little dog, is sometimes portrayed as riding on the back of Monoceros, the unicorn. It spans the Milky Way and contains a large number of open clusters, with the brightest being NGC 2232 & 2264 (both magnitude +3.9) and NGC 2244 (magnitude +4.8), although there are many more for the open cluster enthusiast to choose from. 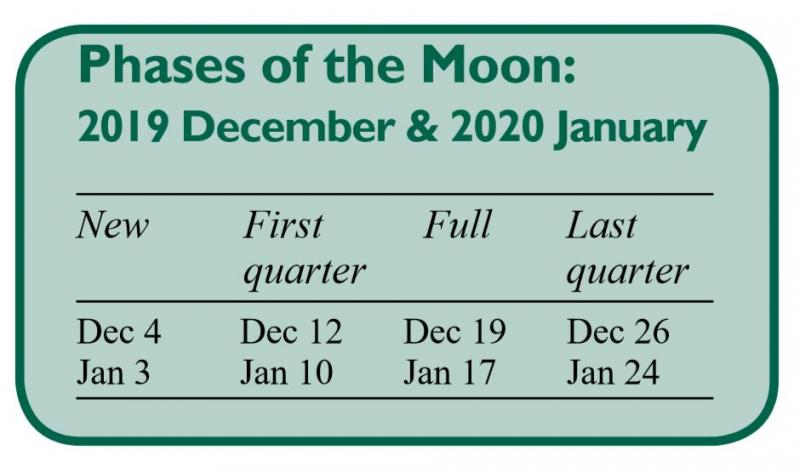 To the south we find Orion approaching the meridian along with his entourage, forming the spectacle of the winter constellations. To his north lies Auriga and Taurus, the latter containing two of the best-known open clusters. To the north-east is Gemini; to the south-east, Canis Major and then to the west begins the long, flowing river of stars that forms Eridanus, the tail reaching right down to Hydrus in the southern hemisphere. The culmination of the hunter brings with it opportunities to image old favourites such as the Great Orion Nebula (M42), as well as the Flame (NGC 2024) and Horsehead (Barnard 33). M42, in particular, lends itself well to DSLR imaging (or similar) at outreach events, since colour can be captured quickly where none was seen telescopically by eye.

In the west Pegasus is preparing to set once more, although the Andromeda Galaxy (M31) is still at a very healthy altitude with its attendant satellites of M32 & M110. The more prominent of the two lines of stars that form Andromeda points almost directly towards the zenith, which currently lies just within the borders of Perseus. This constellation is positioned between the zenith and Andromeda, containing – amongst other things – beta Persei, better known as Algol, the Demon Star. This is a three-star system where two of the members form an eclipsing binary.

Towards the north, the dragon is as close to the horizon as it can get with its tail pointing northwards between the two bears. With Draco on the meridian, this means that Camelopardalis is also there but in close proximity to the zenith. Just across the border between Camelopardalis and Cassiopeia lies the Heart and Soul Nebulae, also known as IC 1805 & 1848 respectively. While Vega is preparing to set one of the other Summer Triangle members, Deneb, will remain above the horizon, but only by a handful of degrees as seen from the south of the UK.

Mercury was at greatest western elongation on Nov 28, with the result that on Dec 1 it is still a morning object 10° above the south-eastern horizon at the beginning of civil twilight. It moves swiftly back into the Sun’s clutches so that by mid-December, with the Sun in the same position, Mercury’s altitude is less than 4°. It reaches superior conjunction on Jan 10, after which it moves east of the Sun to appear in the evening sky. By the last day of the current period, it is 5° above the west-south-western horizon at the end of civil twilight (Sun 6° below the horizon). The planet’s position continues to improve until it reaches greatest elongation (E) on Feb 10.

Venus is a brilliant evening object, becoming more prominent as the days pass. At the beginning of December its elongation is 28°, which equates to it being 6° above the south-western horizon when the Sun is the same distance below it. Thanks to the changing position of the ecliptic and increasing elongation, Venus is 15 & 25° in altitude at the end of civil twilight on Jan 1 & 31 respectively. This will be an excellent apparition of Venus, whereby it will be over 40° high at sunset when it reaches greatest elongation in late March.

On Dec 3 the planet passes less than a degree to the south of the globular cluster M22, and on Dec 11 it is 2° south-east of a considerably fainter Saturn at magnitude +0.6. A slim crescent Moon is close by on Dec 28/29 and Jan 28, providing some photo opportunities. The planet’s magnitude is almost static over the period in question, increasing by a couple of tenths to –4.1 at the end of January. Over the same period of time its apparent size increases from 11.6 to 15.2 arcseconds, as its gibbous phase falls from 89 to 74%.

Earth reaches the winter solstice on Dec 22 at 04:21 UT, for those of us in the northern hemisphere.

Mars is a morning object, rising almost three hours ahead of the Sun at the beginning of December. It moves direct through Libra, reaching and crossing the border into Scorpius on Jan 7, where it stays for just over a week before its eastward journey carries it into neighbouring Ophiuchus on Jan 15. The planet continues slowly but surely to brighten (it is magnitude +1.4 by the end of January) and to grow in angular size to 4.8 arcseconds. This is a process that will continue due to the Earth ‘chasing down’ Mars as the red planet heads towards opposition in 2020 October. A slim crescent Moon passes less than 4° to the east on the morning of Dec 23.

Jupiter is still an evening object, although its period of visibility is to all intents and purposes at an end. This is due both to the position of the ecliptic and to the planet reaching its most negative declination of 2019. Things improve only marginally next year and thereafter Jupiter slowly climbs closer to the celestial equator, eventually crossing it in 2023 mid-January. On Dec 1 it is just 8° in altitude at sunset with an elongation of 20°, and sets a little over an hour after the Sun. The planet is swiftly consumed by the solar glare, reaching conjunction on Dec 27 and subsequently moving westwards to become a morning object. By the end of January the gas giant will rise almost an hour and a half before the Sun; it will be 5° above the south-eastern horizon at the beginning of civil twilight.

Saturn continues to move direct amongst the stars of Sagittarius, close to the ‘Teapot’ asterism. Like its gas giant neighbour, it too is approaching the end of an evening apparition. At the start of the period it is 8° high in the south-west at the conclusion of civil twilight. Given the planet’s magnitude of +0.6 it will be a difficult object as it becomes lost in the Sun’s glare. It reaches solar conjunction on Jan 15, after which it joins Jupiter in the morning skies. By the end of January it has moved sufficiently westwards to rise over an hour before the Sun, as it passes close to the ‘Teaspoon’ asterism. The rings remain well presented to Earth although they do close up slightly during the first half of 2020. If you wish to observe Saturn’s largest Moon, Titan, it is at eastern elongation on Dec 9/10 & 25/26, and in the west on Dec 1/2 & 17/18.

Uranus rises in daylight, having been at opposition in late October. Amongst the stars of Aries, where it stays until mid-2024, it shines at magnitude +5.7 and culminates at a very healthy altitude of 51°.

Neptune is still within the confines of Aquarius and crosses the meridian at an altitude of 32°, setting three hours after the Sun at the end of the period.

Pluto is still in Sagittarius and on Dec 15 lies equidistant between Venus almost 3° to the east, and Saturn to the west.

In the table I have listed events for stars of magnitude +7.0 or brighter, although there are many others that are either of fainter stars or whose observation may be marginal due to elevation or other factors. DD= disappearance at the dark limb and RD= reappearance at the dark limb, whilst DB or RB indicate an event at the bright limb. There is a column headed ‘mm’ to indicate the minimum aperture required for the event. Observations should be reported to the Lunar Occultations Coordinator, Tim Haymes at: occultations@stargazer.me.uk. 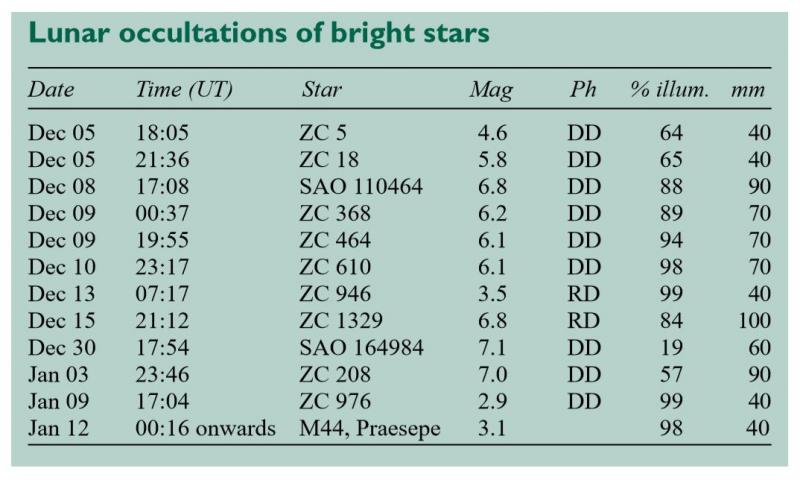 There is only one graze event that occurs during the current period. Observers who live close to the graze track or who are prepared to travel are encouraged to attempt this event and submit results, positive as well as negative, to Tim Haymes at the e-mail address given above. More details are available in the current BAA Handbook.

The Geminids are active from Dec 4–17, with the peak occurring in the early afternoon of Dec 14. The zenithal hourly rate (ZHR) is predicted to be over 100 although an almost full Moon (which unfortunately lies within the borders of Gemini) will rise a little after 18:00 UT, severely limiting the visibility of all but the very brightest of events. 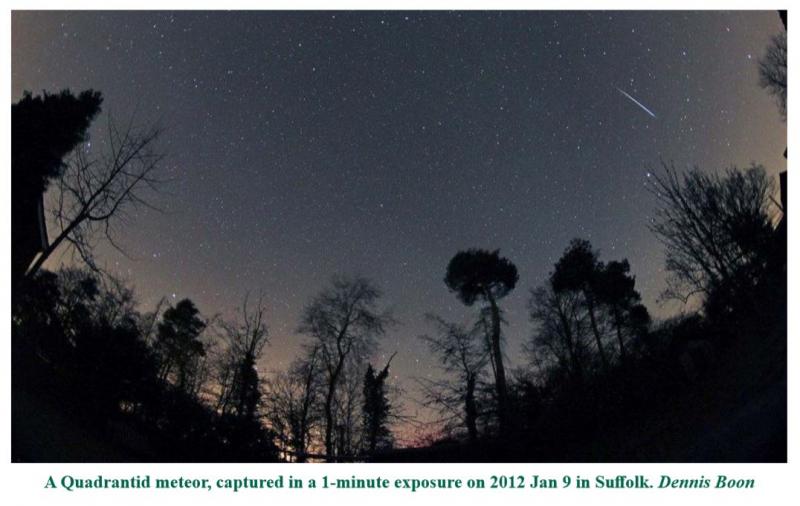 The Ursids produce the last major shower of the year, lasting from Dec 17–26 with maximum taking place on Dec 23. At last there is some good news for meteor watchers because the 4% Moon rises at 06:00 UT, which is just two hours ahead of the Sun on the morning of Dec 24. The ZHR is expected to be around 10, although there was an outburst as recently as 2014.

The Quadrantids are generally seen to usher in the New Year, although activity begins on Dec 28 and carries on until Jan 12. Peak activity is expected to be seen just before dawn on Jan 4, so with a 57% Moon having set at 01:00 UT and the radiant at more than 70°, it just needs the weather to cooperate for there to be a really good show. The prediction for the ZHR is in the order of 80 meteors per hour under ideal conditions.

Observations of any of the above should be reported to Dr John Mason, Director of the BAA Meteor Section, at: docjohn@dircon.co.uk.