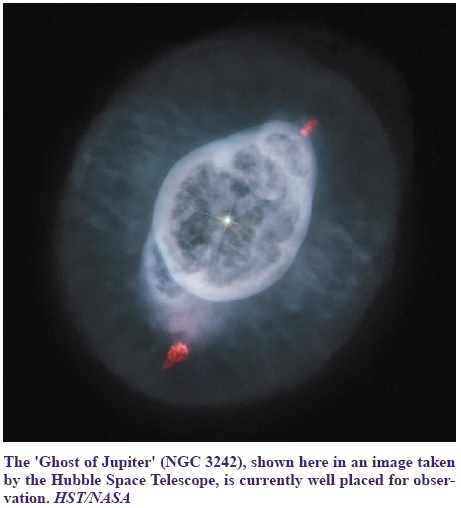 Looking south, Cancer straddles the meridian as does the head of Hydra just below it. The body of the Sea Serpent twists and turns its way to the southeastern horizon, currently disappearing below it and passing Sextans, Crater and Corvus on the way.

Hydra is both the largest (at 1,303 square degrees) and longest constellation in the entire sky, reaching to the borders of Centaurus. There are a few objects of interest in the constellation, including NGC 3242: a planetary nebula known colloquially as the ‘Ghost of Jupiter’. Small telescopes will show it, but apertures of around 12″ are needed to reveal the details of this green/blue oval, which resembles an eye. One of the brighter objects in the portion of Hydra that is visible at this time is the globular cluster M48. At magnitude +5.8, it covers an area of sky equal to the full Moon and is well seen in binoculars.

The southwest is taken up by the brilliant winter constellations, with Orion’s full retinue still visible. The only interloper is the rather faint and shapeless form that makes up the celestial unicorn, Monoceros, whose inclusion in the sky dates back to the sixteenth century. Despite being unassuming it contains a number of interesting clusters and nebulae, with the brightest being NGC 2232 (an open cluster at mag +3.9) and NGC 2244 (mag +4.8, also known as the Satellite Cluster), which is surrounded by the Rosette Nebula. Towards the northern boundary with Gemini is NGC 2264, which contains both the Christmas Tree Cluster and the Cone Nebula.

In the west, Capella (the sixth brightest star in the night sky) is still more than 50° above the horizon. The only body of stars lying between Capella and the zenith is Lynx, named after the animal and introduced by Hevelius in the seventeenth century. Now is an excellent time to become acquainted with this zig-zag line of stars, while it lies so close to the overhead point. In fact, during February the zenith is actually within the constellation’s boundaries. There are a number of faint galaxies in Lynx and one – NGC 2419, which is extremely distant at over 84kpc (kiloparsecs) – has earned itself the title of ‘Intergalactic Wanderer’.

South of Auriga is Taurus, with the Pleiades and Hyades star clusters still 20° in altitude; while still further south the head of the whale is all that remains visible of Cetus. Pegasus has gone, but Andromeda endures along with Aries and Triangulum.

To the north Deneb is on the meridian, but just a handful of degrees above the horizon; Vega is at a similar elevation a little further to the east. Clockwise from Deneb, the Milky Way is marked out by a plethora of open clusters inhabiting Lacerta, Cassiopeia and Perseus. The brightest members of this swathe are M39 in Cygnus, and the lovely Double Cluster in the Sword Handle of Perseus. Just to the north of the ‘W’ asterism in Cassiopeia are the Heart (IC 1805) and Soul (IC 1848), which are both emission nebulae at a distance of 7,500ly (light years).

The east is now graced with the rising of some of the summer groups. Boӧtes (the Herdsman), with the bright star Arcturus, is joined by Corona Borealis, Virgo and the majority of the strong man Hercules. To the north of Boӧtes are the two small groups of Coma Berenices and Canes Venatici, the latter of which represents the Herdsman’s hunting dogs. On its southern borders we find M3, a globular cluster easily seen in binoculars at mag +6.3.

Mercury was in conjunction with the Sun at the end of January, so it begins the period moving east of our parent star to become an evening object. On Feb 27 it reaches greatest eastern elongation, attaining an altitude as seen from the southern UK of a fraction over 11° when the Sun is 6° below the horizon. The angle that the ecliptic forms with the horizon has a huge bearing on how well a body can be seen and at this time of the day and year it facilitates the Northern Hemisphere’s best evening apparition of 2019. On this occasion Mercury’s elongation will be a minimal 18°, whereas the next time it is visible in the evening its elongation will be 25°, however its altitude will then be just 6° with the same solar circumstances. The planet is at its brightest early in the month, although by Feb 18 the planet will be mag –1.1 when it passes 1° from a much fainter Neptune at mag +8.0.

Venus reached greatest western elongation in early January and is now moving slowly back towards the Sun; it will not however reach conjunction until mid-August. At the beginning of February it rises almost three hours before the Sun, but by the end of March this has shrunk to less than one hour despite still having an elongation of 35°. During the period in question the planet’s phase grows from 62% to 81%, but its brightness drops from –4.3 to –4.0 since, of course, its apparent size is diminishing. On the morning of Feb 23, Venus passes a little over 1° north of Pluto.

Mars is still an evening object in Pisces, but passes the meridian before darkness falls at the beginning of February. It crosses the boundary into Aries on Feb 12 and moves swiftly eastwards to reach the border with Taurus on Mar 23. All the while, the Earth is moving further away from the red planet with the result that by the end of March it subtends an angle of just 4.6ʺ (arcsec). This value will continue to fall until a conjunction in September, although there will be no opposition of Mars in 2019.

Jupiter is now a morning object in southern Ophiuchus, where it remains for the majority of this year. As the period begins it rises more than three hours before the Sun, but this has grown to well over four by the end. The gas giant’s brightness continues to rise, slowly but surely, as it approaches opposition in mid-June. A waning gibbous Moon passes less than 2° to the north of Jupiter on Mar 27.

Saturn is also currently in the morning skies, rising over an hour before the Sun early in February. On the 2nd of that month it is occulted by a 6% illuminated waning crescent Moon. As seen from Greenwich, the Moon is 5° below the horizon when the disappearance phase occurs on the bright limb. The reappearance takes place at 06:31 UT on the dark limb, but with the planet just under 2° in altitude. On Mar 29 the Moon once again visits the ringed planet, this time passing less than a degree to the south.

Uranus makes gradual easterly progress, crossing the border from Pisces into Aries on Feb 5. At magnitude +5.8 it is an easy object in binoculars, but with an apparent diameter of 4ʺ, substantial apertures would be required to see anything but a tiny disk. Mars will pass 1° north of the ice giant on Feb 13. By mid-March, Uranus will be lost in the approaching twilight.

Neptune is currently in Aquarius, but too close to the Sun for easy observation. It reaches solar conjunction on Mar 7, after which it moves west of the Sun to become a morning object.

Pluto was in conjunction with the Sun in early January, so is now only just making its way into the morning sky. By the end of March it rises over two hours ahead of the Sun, but thanks to the position of the ecliptic and the dwarf planet’s negative declination it will remain an elusive object. 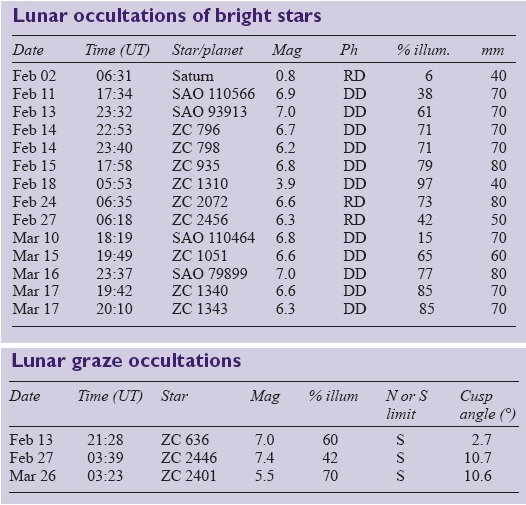 In the table I have listed events for stars of magnitude +7.0 or brighter, although there are many others that are either of fainter stars, or whose observation may be marginal due to elevation or other factors. DD= disappearance at the dark limb, RD= reappearance at the dark limb whilst DB or RB indicate an event at the bright limb. There is a column headed ‘mm’ to indicate the minimum aperture required for the event.

Observations of these events should be reported to Lunar Occultations Coordinator Tim Haymes at occultations@stargazer.me.uk.

Three graze events occur during February and March. Observers who live close to the graze tracks or who are prepared to travel are encouraged to attempt these events and submit results, positive as well as negative, to Tim Haymes at the e-mail address given above. More details are available in the current BAA Handbook. 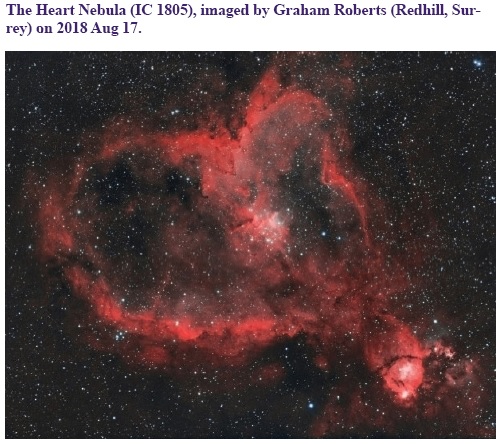 Variable star of the year

The variable star of the year for 2019 is RS Canum Venaticorum, an eclipsing binary of the Algol type with a period of 4.8 days. It is not quite circumpolar from the south of the UK, but during the late evenings of February and March it attains a reasonable altitude. For more details see p.105 of the 2019 BAA Handbook.