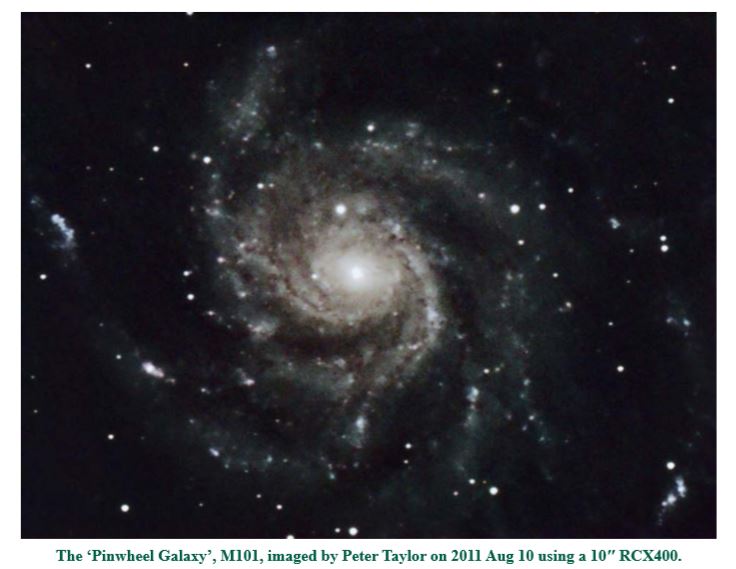 In the east the Square of Pegasus has just risen, whilst Aquarius and Capricornus have not yet fully done so. One member of the Summer Triangle, Deneb, is due east in the celestial swan, Cygnus, and well positioned amidst a number of open clusters. The brightest of these, M39, is at magnitude +4.6. Despite being rather sparse, it spans almost half a degree so is best seen in binoculars. Its nearest rival, NGC 6871, is further west along the body of the swan and shines at magnitude +5.2.

The area contains a number of imaging favourites such as the Cocoon Nebula, the North American and Pelican Nebulae as well as the Veil Nebula, which lies close to the border with Vulpecula. Also close to that constellation’s boundary is the lovely double, Albireo, whose yellow and blue components are close to being members of the celestial fox rather than of the swan.

The bird’s wings run generally north-south, reaching from the legs of the flying horse up towards the head of the dragon. The other two members of the Summer Triangle – Vega and Altair – are a little further west, with the former reaching the meridian due south at the end of July.

The south is dominated by the rather faint and shapeless forms of Ophiuchus, Hercules and Serpens. Just west of them lie Boӧtes and Corona Borealis, which can be used to easily find the rather faint strong man: a line drawn from Arcturus through Alphekka (alpha Coronae Borealis) and onwards will lead you to the ‘Keystone’ which forms the lower half of Hercules’ body. For some reason, the mythological figure is drawn upside down in the sky. 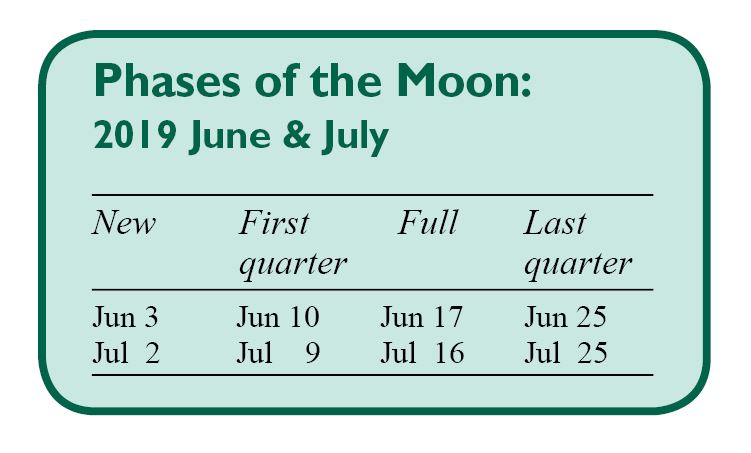 The asteroid Pallas currently lies on the border between Boӧtes and Coma Berenices. If we look closer to the horizon we see Sagittarius, which has just risen, and Scorpius, straddling the meridian. The former is home to Saturn whilst the latter has the asteroid Ceres within its borders, for almost all of June and the first week of July.

Turning to the west we find Cancer has already been lost, while Leo and Virgo are preparing to set. In the area of sky above Leo we find Leo Minor which is, rather predictably, the ‘little lion’; this was an addition by Johannes Hevelius in 1687. Both Leo and its smaller cousin lie away from the galactic plane so there are no nebulae, globulars or open clusters. There are a considerable number of galaxies in the area, although they are of magnitude +9 or +10. The most photogenic are probably those in the Leo Triplet, consisting of NGC 3623 (M65), NGC 3627 (M66) & NGC 3628. These lie just below the belly of the lion.

The fact that Ursa Major is making its way back down towards the horizon tells us that summer is passing. Close to the bear’s tail is the face-on spiral, M101 (also known as the Pinwheel Galaxy), whose magnitude is +7.7. The smaller of the bears is standing on its tail, pointing generally towards the zenith which at present resides on the border between Draco and Hercules. Capella is close to the northern horizon and approaching the meridian, as it prepares once more to climb towards the zenith in the depths of winter.

Mercury passed through a superior conjunction towards the end of May and is now appearing in the evening skies. It will reach greatest eastern elongation on Jun 23 when it will be, in angular terms, a respectable 25° from the Sun. This means that, given the current position of the ecliptic, the planet will set one-and-a-half hours after the Sun and Mercury’s altitude above the west-north-western horizon will be 12° at that time. If you wait until the end of civil twilight (when the Sun is 6° below the horizon), then the smallest planet will be a little over 5° in altitude, with a magnitude of +0.6. As Mercury is never at its brightest at the time of greatest elongation, it is often advantageous to look for it prior to this. For instance, on Jun 6, it is considerably brighter at magnitude –0.7; it is also in fact fractionally higher, with an altitude of almost 6° when the Sun is 6° below the horizon.

Mercury passes close to Mars on Jun 18, when the two bodies will be just 0.2° apart. Following greatest elongation the former moves briskly back into the solar glare, reaching inferior conjunction on Jul 21.

Venus continues to move steadily back towards the Sun in the morning skies, appearing just 6° above the east-north-eastern horizon at sunrise on Jun 1. The change in the angle that the ecliptic makes with the horizon has the effect of cancelling out this movement, so that by the beginning of July the planet’s height above the horizon at sunrise is the same. However, despite a magnitude of –3.9, Venus becomes increasingly difficult to locate as the period in question progresses. Its phase increases and apparent size decreases as a superior conjunction approaches on Aug 14.

Mars continues its long tenure in the evening skies, moving eastwards (direct) through Gemini until it crosses the border into Cancer on Jun 28. In fact it moves direct throughout 2019, suffering no retrograde motion at all; this is because there will be no opposition this year. At the beginning of June, the red planet is 12° above the west-north-western horizon at the end of civil twilight. However, when the Sun is in the same position on the first day of July, Mars is only 3° in altitude and, with a magnitude of +1.8, it will be a taxing object to locate in the twilight as it approaches an early September conjunction. 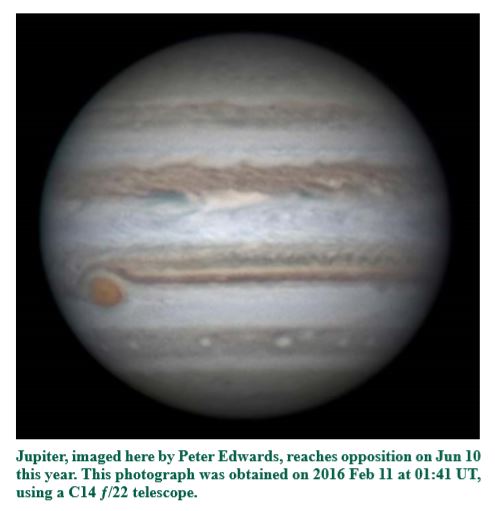 Jupiter rises before 22:00 BST for UK observers early in June, reaching culmination before 02:00 with a disappointing altitude of just 16° as seen from Greenwich. The gas giant reaches opposition on Jun 10, when its 46-arcsecond disc will shine at an impressive magnitude of –2.6. Its location so far below the celestial equator (with a declination of –22° at closest approach) will hamper UK observers, and will continue to do so in subsequent oppositions. Things do improve gradually over the coming years, although it will be 2023 before an opposition occurs for which Jupiter is north of the celestial equator. The planet has been moving retrograde through the southern part of non-zodiacal Ophiuchus since April and will continue to do so until mid-August.

Saturn rises several hours later than Jupiter, but early in the period it will be just above the horizon as seen from the south of the UK at midnight BST. Latitudes further south will fare much better, with it rising earlier in the evening. The planet is located in Sagittarius, a little to the south of the ‘Teaspoon’ asterism. It is moving retrograde, a state of affairs that will remain until mid-September, when it reaches its second stationary point.

An opposition of Saturn is reached on Jul 9 when, as seen from the UK, it will rise at 21:00 BST and will cross the meridian due south at 01:00 BST. At that time it will have a declination of almost –22°, which translates to it culminating at an altitude of just 17°. Sadly, rather than improving, the ringed planet’s negative declination increases slightly until there is a reversal of fortunes at the end of September.

Uranus is moving direct through Aries, rising an hour and a half before the Sun in early June. By mid-July this separation has grown to four and a half hours, as seen from the UK, and the planet is visible in reasonably dark skies (Sun 12° below the horizon) at an altitude of almost 25°. It will reach opposition in late October.

Neptune is amongst the stars of Aquarius and reaches its first stationary point on Jun 21, after which it assumes retrograde motion. It rises an hour or so earlier than Uranus and by early July will be on the eastern horizon at midnight. By the end of the period, it is on the meridian due south a little before 04:00 BST, at an altitude of 33°. Neptune will come to opposition in mid-September.

Pluto still resides amongst the stars of Sagittarius and lies a handful of degrees to the east of Saturn. It reaches opposition on Jul 14.

There will be a partial lunar eclipse during the late evening of Jul 16, when the Moon passes though the southern portion of the Earth’s shadow. This event will be visible across Europe, South America, Africa, Asia and Australasia.

A large number of occultations of faint stars occur whilst the eclipse is in progress. These are, in general, of stars with magnitudes between +9 and +12.

In the table I have listed events for stars of magnitude +7.0 or brighter, although there are many others that are either of fainter stars or whose observation may be marginal due to elevation or other factors. DD= disappearance at the dark limb and RD= reappearance at the dark limb, whilst DB or RB indicate an event at the bright limb. There is a column headed ‘mm’ to indicate the minimum aperture required for the event. Observations of these events should be reported to Lunar Occultations Coordinator Tim Haymes at: occultations@stargazer.me.uk.

There is only one graze event occurring during June and July. Observers who live close to the graze track, or who are prepared to travel, are encouraged to attempt this event and submit results, positive as well as negative, to Tim Haymes at the e-mail address given above. More details are available in the current BAA Handbook.

The Delta Aquarids are active from Jul 12 to Aug 23, with the maximum occurring on Jul 31 when up to twenty events per hour could be expected given ideal conditions. With the Moon approaching ‘new’, it will take no part in the proceedings at all. As seen from Greenwich, the radiant rises a little before 23:00 BST on the night of maximum and culminates at 03:00 with an altitude of 24°. This shower has a high proportion of faint meteors, so the absence of moonlight will prove a distinct advantage.

The Perseids are another shower stretching across a long period. Activity begins on Jul 17 and continues until Aug 24. The maximum takes place on Aug 13, so further mention will be made in the next Journal. However, for those keen to follow the entire proceedings, observations in mid to late July will be hampered by the Moon which is full on Jul 16 (although thanks to the position of the ecliptic at this time of the day/year, it is low in the sky). By the end of July the Moon will be approaching ‘new’ although true darkness (Sun 18° below the horizon) will not arrive in the south of the UK until a little before midnight, lasting only until 02:30.