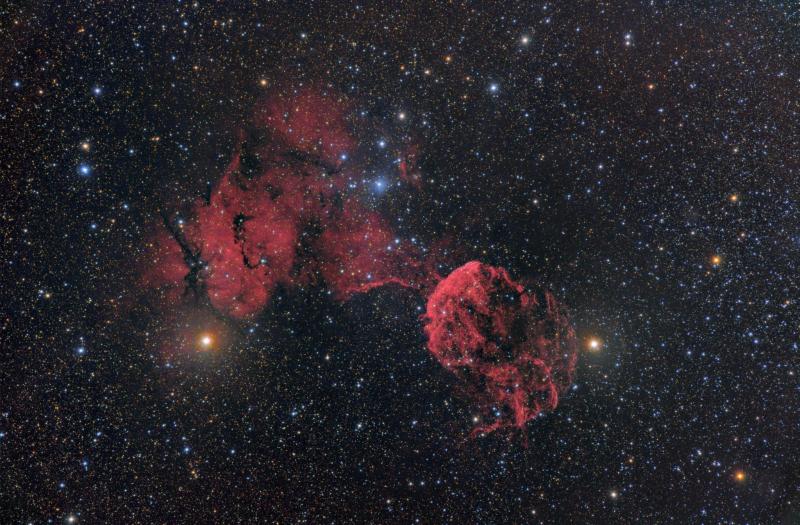 In the east, Orion has just edged above the horizon along with some of the other winter constellations. Gemini, Auriga and Taurus have all risen with the Pleiades, those harbingers of winter, now 45° in altitude. If open clusters are your thing, then there are more than enough to keep you busy in the area around Auriga, Taurus and Perseus, with many being easy binocular objects. M35, which is actually across the border in Gemini, is one of the brightest at magnitude +5.1 and is almost half a degree in diameter.

Several degrees below M35, between the stars mu and nu Geminorum, is the supernova remnant IC 443. Better known as the Jellyfish Nebula, this is larger still at 50 arcminutes across. Between the horns of the celestial bull and close to Zeta Tauri is another, probably better known, supernova remnant – M1, otherwise known as the Crab Nebula. This was a name given to it by the 3rd Earl of Rosse, using not the famous Leviathan telescope but his more modest 36-inch instrument. His later drawings, made with the 72-inch, are remarkably dissimilar.

Moving west to the feet of the bull, we find the second most massive body in the asteroid belt, (4) Vesta. At magnitude +6.6, the asteroid rather conveniently forms an equilateral triangle with the stars Omicron and Xi Tauri.

For those in the far south of the UK – or indeed further south still – now is a good time to check in that direction for the horizon-hugging constellations of Fornax, Sculptor and Piscis Austrinus, the latter of which contains the first-magnitude star Fomalhaut. The easiest way to locate it is to draw an imaginary line through the two most westerly stars in the Square of Pegasus and continue it towards the horizon, where it will pass close to the brightest star in the southern fish. Halfway along that line, as it passes through Aquarius, can be found the planet Neptune. If you have a 75 or 100mm instrument then you will, with moderate magnification, be able to reveal its tiny blue disk.

The water bearer also contains Messier’s second object, the globular cluster M2, which at magnitude +6.5 is thought to contain 150,000 members. To the north of those groups already mentioned we find Pegasus and Andromeda; the latter is sprawled across the meridian with the galaxy M31 lying exactly due south at a very commendable altitude of 80°.

Towards the west, Capricornus and Aquila are beginning to set although the three bright stars that form the Summer Triangle are all still on view, with Deneb best placed at 50° above the horizon. The group of small constellations that during the summer evenings were arranged in a line below Vega are now strung out from west to east, almost parallel with the horizon. Closest to Lyra is Vulpecula and then come Sagitta, Delphinus and lastly Equuleus. However, the first and last of these – the fox and the small horse – have very little in the way of form to help with identification. Speaking of small constellations, look to the north of Cygnus to find Lacerta, often likened to a small version of the ‘W’ of Cassiopeia.

Looking north, the tail of the Great Bear straddles the meridian whilst its smaller cousin points down towards the horizon. The dragon winds between them with its neck pointing towards one of the northern hemisphere’s finest globular clusters, M92 in Hercules, which is a little over 20° in altitude. Cassiopeia is also on the meridian with the zenith currently lying within the boundaries of the celestial queen, who was one of Ptolemy’s original 48 constellations. 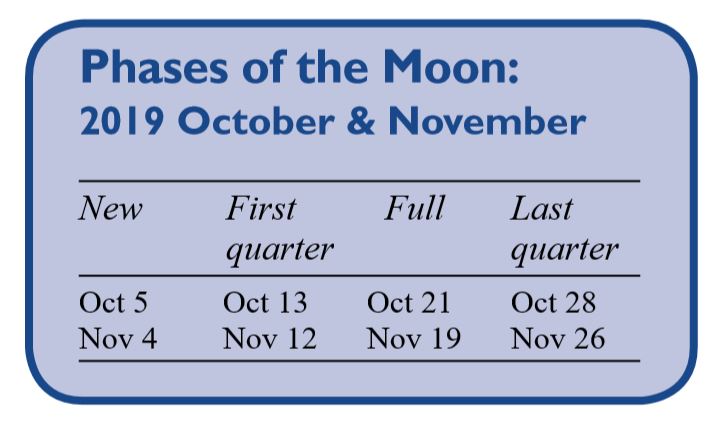 Mercury is an evening object at the beginning of October, having been at superior conjunction in early September. It reaches a greatest elongation (E) of 25° on Oct 20, when it lies just 3.5° above the south-western horizon at sunset. This will be a very poor apparition for those observing from northern temperate latitudes.

The planet moves back into the solar glare to reach inferior conjunction, this time with the added attraction of a transit on Nov 11. It then moves into the morning sky to arrive at greatest elongation (W) on Nov 28, when it will be 20° from the Sun. On that date it can be found in the south-east at an altitude of 15°, shining at magnitude –0.5. The planet continues to brighten slightly, although by now its elongation is decreasing.

Venus reached superior conjunction in mid-August, so it is now moving east of the Sun to become an evening object that will ultimately provide an excellent apparition in 2020. During October and November it is best seen from south of the equator, as from Greenwich it is a far more challenging object despite a magnitude of –3.9. On Nov 1 it is just over 1° above the south-western horizon at the end of civil twilight, and sets less than an hour after the Sun. By the end of the period in question Venus is almost 10° high at sunset, so although its progress may be slow it will be well worth waiting for.

Mars, having reached conjunction on Sep 2, is now technically a morning object rising an hour before the Sun at the beginning of October. With an elongation of just 10° and a magnitude of +1.8, it is difficult to observe. However, the red planet pulls away from the Sun so that by the end of October and November its elongation has grown to 20° and 30° respectively. On the last day of the period, Mars passes just 10 arcminutes north of the magnitude +4.5 star lambda Virginis. Both the planet’s brightness and apparent size are creeping slowly upwards in preparation for an opposition a year from now.

Jupiter is travelling direct through the southern portion of Ophiuchus and will eventually move eastwards into neighbouring Sagittarius on Nov 16. Its period of visibility is becoming shorter now as it moves towards a solar conjunction in late December. As the gas giant moves in towards the Sun it passes close to Venus, that is in turn moving out. On the evening of Nov 24 the two planets are just 1.5° apart and approximately 5° above the south-western horizon at the end of civil twilight. At the time of the appulse Jupiter, at magnitude –1.9, is outshone by a dazzling Venus at magnitude –3.9. However, it still presents a disk that is a very respectable 32 arcseconds across.

On Nov 28 there is a daylight lunar occultation of Jupiter, the reappearance phase of which is visible from Greenwich. The planet can be seen emerging from behind the bright limb of a 4% illuminated Moon at 10:29 UT, but it will be just 7° above the south-eastern horizon at the time.

Saturn can still be found moving direct amongst the stars of Sagittarius just south of the ‘Teaspoon’ asterism. It reached opposition in early July, so is past its best and unfortunately still suffering from the problems brought about by a large negative declination of over 22°. This means it is more favourably presented to southern hemisphere observers, who also get to see the ringed planet occulted on Oct 5 & Nov 2. Saturn’s brightness slips slightly from +0.5 to +0.6 during the period, whilst its apparent size drops to 35arcsec. By the end of November, the planet sets a little over three hours after the Sun as seen from Greenwich.

Uranus is located in the southern part of Aries, not far from the head of Cetus, the whale. It is generally visible throughout the hours of darkness and attains a healthy altitude of just over 50° as seen from the south of the UK. It comes to opposition on Oct 28, when its magnitude will be +5.7 and its angular diameter 3.7arcsec.

Neptune was at opposition in late September and rises a little earlier than Uranus, though it sets considerably sooner. It lies within the boundaries of Aquarius, transiting with an altitude of 32°. Its magnitude is +7.8 and it displays a disk 2.4 arcseconds across.

Pluto still resides in Sagittarius and therefore its altitude is limited, while the period of visibility is becoming shorter. By the end of November its elongation is 43°, with it setting three hours after the Sun.

As mentioned above there will be a transit of Mercury on Nov 11 starting at 12:35 UT and, in the case of the UK, concluding after sunset has taken place (in Glasgow at 16:14, and in London 16:34 UT). The entire event is visible from Central and South America as well as the east of the USA. As this event takes place at the ascending node, the planet’s apparent diameter will be just 10arcsec. The next such event is not until 2032 and occurs on Nov 13. 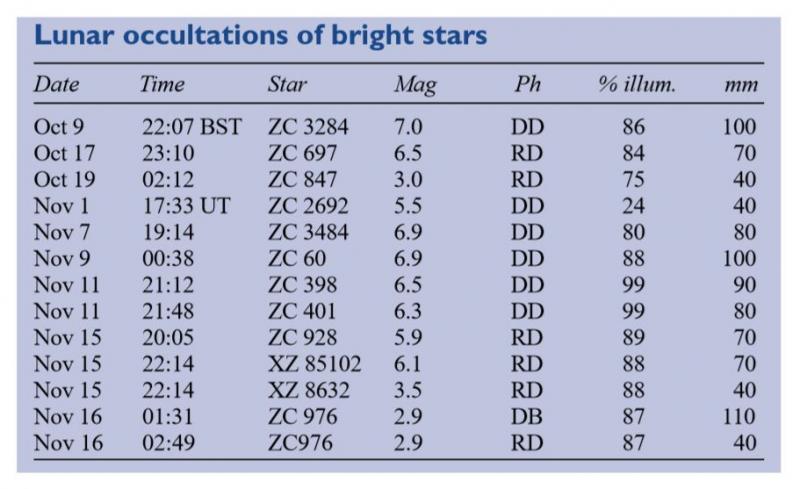 In the table I have listed events for stars of magnitude +7.0 or brighter, although there are many others that are either of fainter stars or whose observation may be marginal due to elevation or other factors. DD= disappearance at the dark limb and RD= reappearance at the dark limb, whilst DB or RB indicate an event at the bright limb. There is a column headed ‘mm’ to indicate the minimum aperture required for the event.

In the early hours of Oct 22 the Beehive cluster, M44, is visited by a last quarter Moon. This gives rise to a number of events involving stars in that cluster, which begin at 04:05 BST and conclude at 07:20 BST. They range from magnitude +6.4 to +10.4. Observations of any of these events should be reported to the Lunar Occultations Coordinator, Tim Haymes at: occultations@stargazer.me.uk.

There are six graze events that occur during October and November. One of these is of a magnitude +3.5 star where the cusp angle is 13°, occurring just after 22:00 UT. However, the bad news is that the Moon is 88% illuminated at the time.

Observers who live close to the graze tracks or who are prepared to travel are encouraged to attempt these events and submit results, positive as well as negative, to Tim Haymes at the e-mail address given above. More details are available in the current BAA Handbook.

The Draconids suffer, as many showers have this year, from the intrusion of moonlight. The normal limits are Oct 6–10 with maximum occurring on Oct 8 when, under ideal conditions, we could expect a ZHR (zenithal hourly rate) of 25. The Moon will be 80% illuminated, but comparatively low down in the south, close to the Aquarius/Capricornus border. 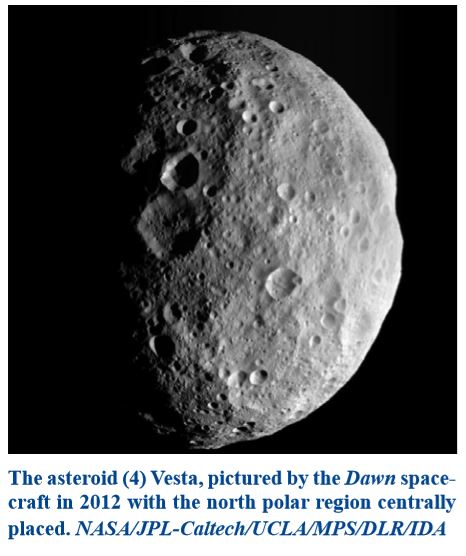 The Orionids fare no better, with their peak of activity on Oct 21/22 being hindered by a 45% Moon that rises just an hour after the radiant, which lies between Orion and the feet of Gemini. If the long, flat maximum continues until the night of Oct 22/23, that would give a little more observing time in the evenings before moonlight interferes.

The Leonids perhaps need our sympathy the most as a 60% Moon, in Cancer, rises just ahead of the radiant on the predicted night of peak activity, Nov 18. Fortunately for this year no enhanced activity is predicted.

The alpha Monocerotids occasionally provide short-lived outbursts, as last occurred in 2016. The night of maximum activity is predicted for Nov 21 and whilst even this is not fully ‘moonlight free’, the radiant does rise four hours before a 25% waning crescent Moon appears.

Results from any of the above should be reported to the Director of the Meteor Section, Dr John Mason, at docjohn@dircon.co.uk.