Now in the deep midwinter, we have the shortest days but longest nights so if the skies are clear, this is the astronomers’ dream season. We can still access some more northern summer constellations in the west, and if we beat the chilly early mornings, we can explore the spring targets rising in the east. The autumnal constellations are still available in the south-west and Mars remains prominent in south-eastern Pisces as the year ends, but strays in prograde fashion into Aries through January when it will overtake Uranus. 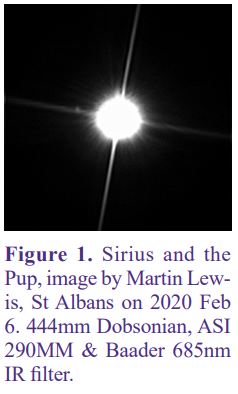 Orion the hunter is now prominent all night, although only reaching the meridian at 21:00 UT at the end of January. Follow the Belt of Orion north-west and find Aldebaran (the Eye of the Bull) in Taurus; use the Belt in the opposite direction to find scintillating Sirius to the south-east. Trying to separate the Pup, the companion white dwarf, from this brightest star in the sky is quite a challenge, although many have succeeded (Figure 1). Locate Rigel at Orion’s foot and trace through Bellatrix to locate Capella (alpha Aurigae), the brilliant yellow star in the celestial chariot; then follow a line from Rigel through the Belt to the twins, Castor and Pollux. What a signpost!

Sprawling sea monster Cetus swims astride the meridian at the beginning of December, supporting Pisces, then Aries, Triangulum and Andromeda, who now lies close to the zenith. By the turn of the year, the dominant bull takes centre stage.

Taurus is rich in deep-sky interest. The nearby open star cluster, the Hyades, dominates the constellation, the V-shaped asterism representing the head of the charging bovine. Often overlooked in favour of the more spectacular Pleiades, the Hyades has an equally important history in astrophysics as it is one of the nearest clusters in which a full population assessment can be made. It is used as a first step in determining the distances to other open star clusters, within the galaxy and beyond. 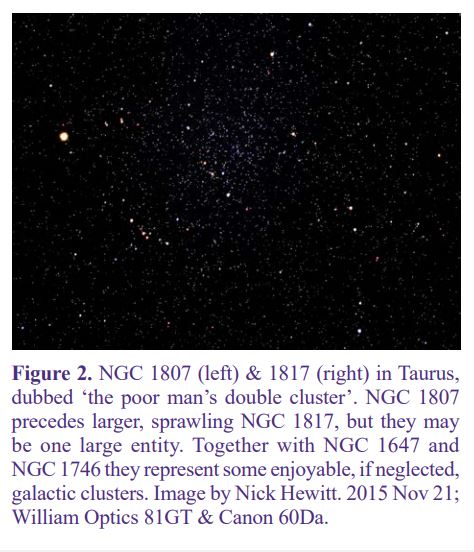 Bright orange first-magnitude Aldebaran, alpha Tauri, seems to be part of the cluster but is only half the distance at 65 light-years compared with the Hyades at 153 light-years. The name Aldebaran is derived from ‘al Dabaran’, Arabic for ‘the follower’ of the Pleiades. Few observers will have missed the opportunity to enjoy this dazzling mass of young stars through binoculars or rich-field telescopes. But other open clusters can be found near the bull’s horns to the east. NGC 1647 and NGC 1746 lie between these formidable spikes. NGC 1807 and 1817 lie just above the raised shield of Orion and may well be one large cluster with brighter condensation (Figure 2).

Near zeta Tauri, at the lower of the bull’s horn tips, we find one of the most famous deep-sky treasures: the Crab Nebula, Messier’s first catalogue entry. This supernova remnant was found to derive from the ‘new star’ of 1054 and remains one of the most studied nebulae of recent history. It is not however the only supernova remnant in the vicinity (although it is the easiest to observe). A real challenge is the 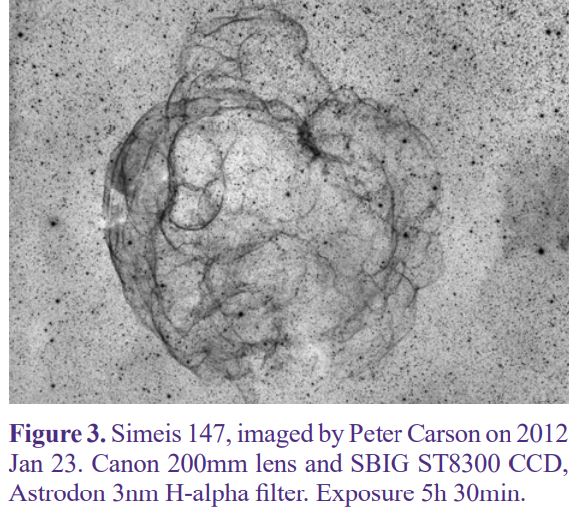 giant ‘Spaghetti Nebula’ on the Taurus-Auriga border. Simeis 147 (Figure 3) was discovered in 1952 at the Crimean Astrophysical Observatory and it is a much older remnant than the Crab, being some 40,000 years old. At 3,000 light-years distance it is much nearer than its famous neighbour and must have been a sight to behold for our Upper Palaeolithic ancestors, assuming it wasn’t too cold outside the cave. It is very low-surface brightness, and covers some three degrees so it is best captured with a telephoto lens.

A much easier target is NGC 1514 (Figure 4), a planetary nebula discovery of Sir William Herschel in 1790. Its prominent central star persuaded the great astronomer to think it must be related to the nebula, suggesting that the latter was not ‘of a starry nature’, i.e. it was gaseous. It is a good size, being some two arcminutes in diameter with a much fainter outer halo, and is a 10th magnitude disc glowing blue on images. The prominent central star is a binary, but not one that can be split by eye.

At a time of vanishing variable nebulae (see p.329), it is good to find that Hind’s Variable Nebula is still available. Associated with the young stellar object T Tauri, just north of the Hyades, the nebula NGC 1555 completely disappeared from view soon after discovery in 1854, and was only recovered half a century later. Could Hind’s Nebula vanish again too?

Orion is arguably the most spectacular constellation in the sky, with seven brilliant stars forming a familiar asterism. Last winter the second-brightest star, red supergiant Betelgeuse (alpha Orionis), became much fainter than usual. Known to be variable for many years, this fade was unusually deep and there was speculation that it may go supernova. Although Betelgeuse recovered and has appeared to be behaving again, do make naked eye estimates. Who knows what may happen? (See Dr Mark Kidger’s paper on p. 342.)

The Great Nebula in Orion is so easy and rewarding to observe that it is easy to overlook the numerous other interesting targets nearby. One is the reflection nebula Messier 78 (Figure 5), lying on the celestial equator to the north-east of Alnitak, the eastern Belt star. Two 10th-magnitude stars peer out of ill-defined nebulosity, not much enhanced with light-pollution reduction filters. To the south-west used to nestle McNeil’s Nebula, AWOL since 2018 – but could it return?

A challenge in the north-east of Orion is the planetary nebula adjacent to mu Orionis, a fouth-magnitude quadruple system. Sadly, all components are spectroscopic. Abell 12 is hard to spot due to the glare of mu itself, but shows well on images (Figure 6a). An easier planetary is NGC 2022, halfway between Betelgeuse and lambda Orionis. This small prolate spheroid is some 28 arcseconds in its major axis, but has quite high surface brightness and a pleasing blue tinge when photographed (Figure 6b).

One of the best multiple star systems on show is sigma Orionis (Figure 7), a bright white fourth-magnitude star just south of Alnitak that is in fact the brightest member of an open cluster. It is composed of a very tight binary pair, AB, the components of which are just 0.2 arcseconds apart. The other prominent three stars are easily viewed in small telescopes. C is magnitude +8.8 at 11 arcseconds from AB; D is +6.6 at 13 arcseconds and E also +6.6 at 43 arcseconds.

Beyond Orion, we have the meandering river Eridanus, springing from near Rigel and flowing into the south-west to cascade into the southern hemisphere, terminating with brilliant Achernar in the far south. Below Orion, unnoticed by the hunter who is distracted by the charging bull, lies Lepus the hare. But Lepus may have been 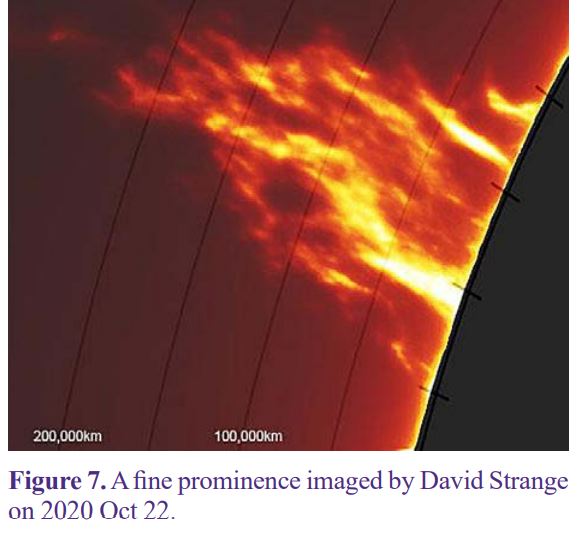 spotted by the large dog to the east, Canis Major. Hemmed between the two canines, Canis Major and Minor, lies the fabled unicorn Monoceros – dim but packed with treasures.

In the north, Ursa Major begins a circumpolar rise to spring prominence, and below the bear the zodiacal constellations of Cancer and Leo provide an early hint of spring to come.

The Sun continues to be rather quiet, with a paucity of sunspots, but there is usually action to enjoy in H-alpha (Figure 8). The winter solstice occurs on Dec 21.

There will be a total eclipse of the Sun on Dec 14, greatest eclipse being at 16:14:39 UT. The only land that the Moon’s umbral shadow will cross is in southern Chile and Argentina, with totality lasting two minutes and 10 seconds over northern Patagonia (Argentina). Whether this will be seen by many eclipse chasers remains to be seen as COVID-19 takes its toll on travel. 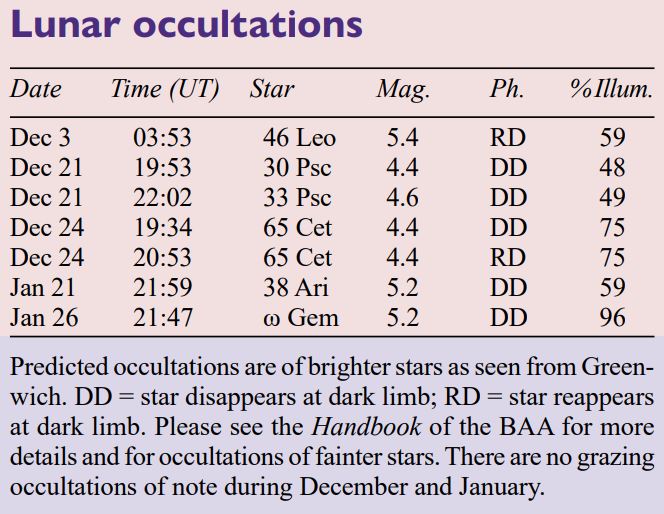 Mercury has a morning showing in very early December, but is soon lost as the planet speeds to superior conjunction on Dec 20. When returning to the evening sky, the tiny disc will remain low. Eastern elongation occurs on Jan 24.

Venus is prominent at dawn in early December and brilliant at magnitude –4, although now low in the south-east. The diminishing size and waxing phase will continue, the gibbous disc beginning December at 11.6 arcseconds but being only 10 arcseconds at the end of January, by which time proximity to the Sun will make observation hazardous. Venus will crawl to superior conjunction on Mar 26.

Mars becomes higher in the early evenings while travelling eastwards, but diminishes in size from 14.5 arcseconds on Dec 1 to 7.8 arcseconds by Jan 31. As the disc shrinks fairly rapidly, so the brightness dims, fading from –1.1 to +0.44 over two months while the phase will become more obvious. For most enthusiasts, this very favourable apparition will be over. Moving into Aries in early January, Mars passes two degrees north of Uranus on Jan 21. 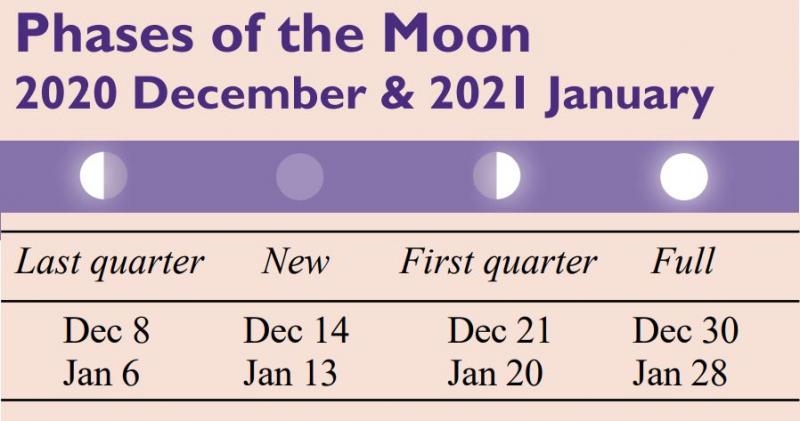 Jupiter and Saturn are now very low in the south-west at dusk, and an exceptionally rare close conjunction can be enjoyed between Dec 20 & 22. The two gas giants have not been this close since 1623 and on Dec 21 they will be a mere 6.1 arcminutes apart. They can be viewed together in a medium-power eyepiece, and images could be spectacular. Find an unobstructed south-west horizon and make the most of this, because they will not have a further close conjunction until 2040 Nov 5 in the pre-dawn sky. Then they will still be a good degree apart, but in compensation Mercury will also be on view nearby. Something to look forward to!

Saturn reaches conjunction with the Sun on Jan 24 and Jupiter follows suit on Jan 29, both being lost to view for a while.

Uranus is nicely positioned in southern Aries. The small disc is just 3.8 arcseconds in diameter and at magnitude +5.7, observation is always tricky. Neptune is now very low in the south-west in mid-evening in December – the last realistic opportunity to find this remote world.

Of the minor planets, (1) Ceres is low down in Aquarius early in December and (2) Pallas is an early-evening asteroid in Aquila, visible soon after sunset in the south-west.

The Geminids (Figure 9) are often the best shower of the year and this 2020 peak promises to be very favourable. This richest of showers will be best on the moonless night of Dec 13/14, although some Geminids can be seen between Dec 4 & 17. These slow, often bright and colourful meteors originate from debris left by the asteroid 3200 Phaethon. The best rates are typically after midnight, and have been slowly increasing so weather willing, we should have a great show.

The Quadrantids are active after Christmas between Dec 28 and Jan 12, with an often rich but sharp peak on Jan 4. The meteors tend to be faint. The former constellation of Quadrans Muralis gave the shower its name, but has been axed. The radiant is in northern Boötes, not so far from Alkaid at the end of the Great Bear’s tail. The parent body is uncertain.

Comet C/2020 P1 (NEOWISE) was discovered on 2020 Aug 2 and reached perihelion on 2020 Oct 20, when its perihelion distance of 0.34au suggested that it could brighten nicely, but as always we shall have to see. It was nearest Earth on Oct 13 at 0.66au. By early December, it will be in the morning sky between Arcturus and Spica, but will probably be fading rapidly. There are no other significant comets anticipated at the time of writing.