This period of mid-autumn is surely dominated by the planet Mars, reaching opposition on Oct 13. Dominating a relatively barren area of sky, this perihelic opposition is likely to be the best for many a year.

The Summer Triangle dominates the west-southwest and this is a good time to view the delights of Lyra, Cygnus and Aquila. The Milky Way now runs west to east through the zenith, chock-a-block with clusters and nebulae, with rich pickings for deep sky enthusiasts.

The period will be a good time to monitor SV Sagittae. This is the BAA’s Variable Star of the Year: an R Corona Borealis-like star that generally hovers at around magnitude +11 but is prone to deep fades. There have been nine fades recorded by the Variable Star Section since 1988. RCB stars are rare, the fade due to ejections of sooty material obscuring the star. See more details and a chart in the BAA Handbook (pages 105–7).

The large constellation of Pegasus dominates the southern aspect. The Square of Pegasus is not brilliant but, once found, is a valuable sky-marker. It also introduces the best-known of the celestial legends, that of the rescue of Andromeda from the sea monster (Cetus) by the heroic Perseus. It  seems to be the Greek myth that many schoolchildren know, probably thanks to the decapitated Medusa held gingerly by Perseus. Andromeda’s parents, Queen Cassiopeia and King Cepheus, are now prominent near the zenith and the hungry sea monster Cetus – soon to be petrified – sprawls to the east of the meridian.

Unrelated to the myth are the ‘watery’ constellations of Capricornus, Aquarius, Piscis Austrinus and Pisces, all south or south-west of Pegasus. None are spectacular, but using Pegasus as a guide, we can find our way around. Follow the western stars of the Square, Scheat (beta Pegasi) and Markab (alpha Pegasi) through eastern Aquarius to Fomalhaut (alpha Piscis Austrini). At magnitude +1.16, it is the most southerly first-magnitude star visible from the UK, but is dimmed by its low altitude and often obscured by seasonal mists. 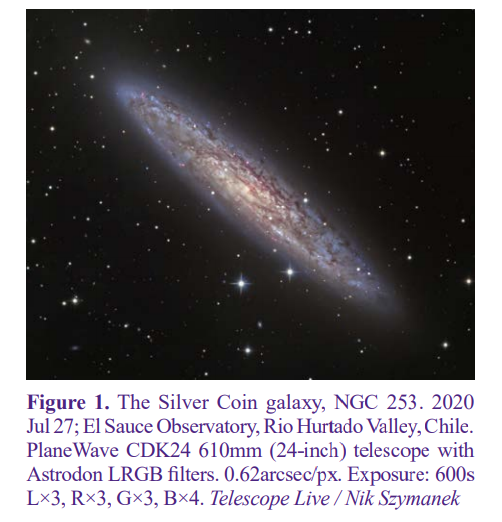 The eastern stars of the Square, Alpheratz (alpha Andromedae or delta Pegasi) and Algenib (gamma Pegasi) point down to lonely Diphda, the second-magnitude ‘beta’ star in the tail of Cetus. Further south of Diphda is Sculptor, scraping the southern horizon. On a very transparent night look for a large nearby galaxy, NGC 253, nicknamed the Silver Coin (Figure 1). It was discovered by Caroline Herschel in 1783. Its apparent diameter of 27 arcminutes makes it one of the largest galaxies on view and it can reveal spectacular detail. A member of the Sculptor galaxy group, it is part of the nearest significant group to our own Local Group of galaxies.

Andromeda herself trails behind Pegasus and stretches eastwards towards her saviour Perseus. Famous for the Great Andromeda Galaxy (Messier 31) and the two elliptical satellites Messier 32 and 110, there are other enjoyable sights for modest telescopes. NGC 7662 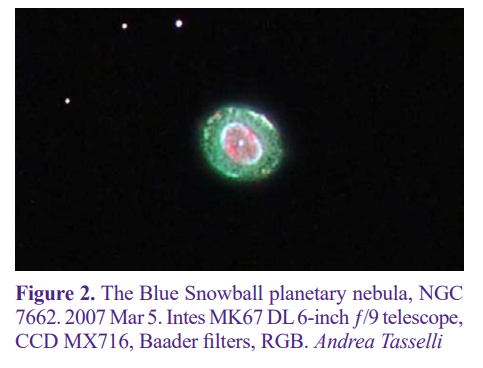 (Figure 2) is a brightly-coloured planetary nebula, nicknamed the Blue Snowball. Follow a line from Markab through Scheat, almost the same distance to omicron Andromedae and then slightly to the east; you will find the small but high-surface-brightness nebula with its marked blue colour.

The central star that represents Andromeda’s belt is Mirach (beta Andromedae) and star-hopping north we find the Great Andromeda Galaxy; but in the same field as the second-magnitude star is a nearby dwarf lenticular galaxy known as the Ghost of Mirach (Figure 3). At a distance of 10 million light-years, it is outside the Local Group of galaxies, and its proximity to Mirach makes it a tricky visual target. Further east still, we encounter a fine double star, Almach (gamma Andromedae), one of the most colourful for small telescopes. A yellow-orange primary and bluish-green secondary lie an easy 10 arcseconds apart (Figure 4). This 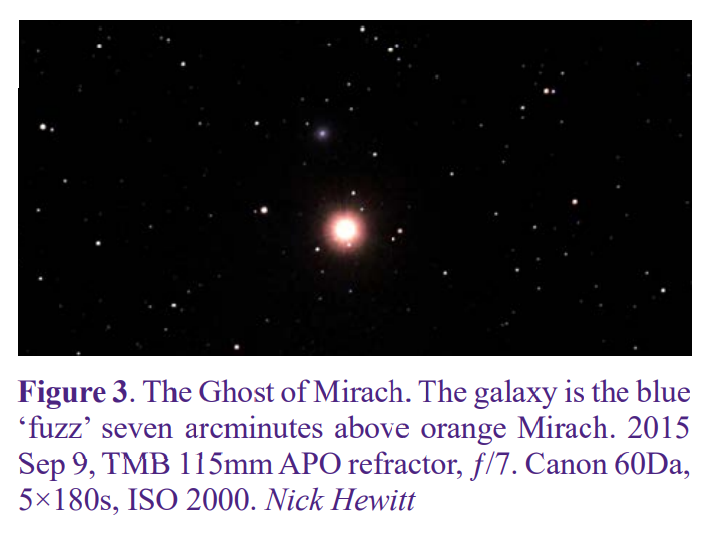 secondary star is in fact a triple system – two of the three are spectroscopic, but using very large apertures, the spectroscopic pair can be teased away from the third at a separation of 0.3 arcseconds.

Forming a shallow triangle to the south of the line between Almach and Mirach, and north of Triangulum, is a loose and unusual open star 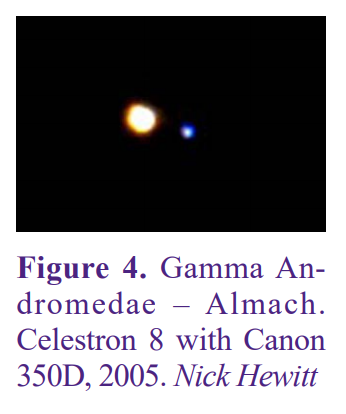 cluster, NGC 752 – another Caroline Herschel discovery. Perhaps best viewed in large binoculars, it is not rich, with some 60 stars spread over a degree of sky, but they are mature and the cluster is ancient compared with more typical examples, being around two billion years of age.

Some red Mira variables should reach peak brightness during October and November. Mira itself (omicron Ceti) should reach maximum at the end of September or early October and will be easily visible to the naked eye at around second-to-third magnitude. Two other accessible but fainter Mira-like stars, R Andromedae and T Cassiopeiae, follow in this period with greatest brightness typically around seventh magnitude, so they are good binocular targets.

In the east, Aldebaran (alpha Tauri) and Capella (alpha Aurigae) demonstrate that autumn is well underway with the promise of frosts and long chilly nights to come, and by the end of November our great winter signpost, Orion the hunter, will be very prominent before midnight.

The Sun remains frustratingly quiescent at present, a few meagre sunspots appearing in late summer. The next solar cycle is predicted to peak in 2025, so perhaps 2021 will provide more activity.

There is only one eclipse during this period: a penumbral lunar eclipse on Nov 30. It will hardly set the pulse racing, being in the morning as the Moon sets, and with the penumbra barely tipped at all. It is at ‘maximum’ at 07:35 UT.

Mercury is an evening planet, at an eastern elongation of 26° on Oct 1, but desperately low from the UK. Daylight imaging may glimpse the 6.8-arcsecond disc, but teasing detail out will be very hard. It then races to inferior conjunction on Oct 25 to reappear in the morning sky, reaching western elongation on Nov 10 when 19° from the Sun and not too far from Venus. The disc remains tiny though.

Venus will be a brilliant morning planet, rising well before the Sun and blazing before dawn, remaining at magnitude –4 throughout the period. The disc will shrink from 15.5 arcseconds on Oct 1 to 11.5 arcseconds on Nov 30, and an increasingly gibbous phase will be apparent. It doesn’t reach superior conjunction until late March in 2021. 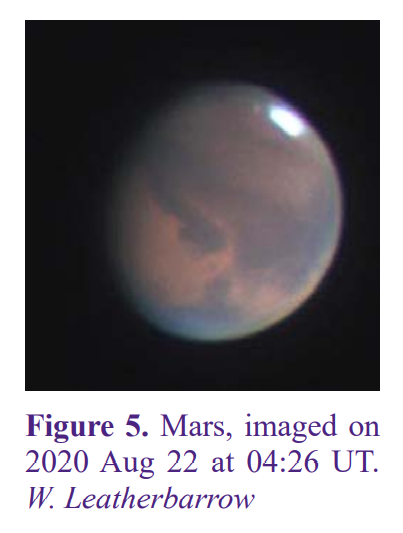 Mars is superb throughout the period. It is closest to Earth on Oct 6, at 62 million kilometres and with an apparent disc diameter of 22.6 arcseconds, and then reaches opposition a week later on Oct 13. At magnitude –2.6 in Pisces, the planet will dominate the area although the Moon, two days past full, will swing south of the Red Planet on the night of Oct 3. Mars will show retrograde motion westwards through Pisces until mid-November, when it will resume eastward motion.

Although it will shrink during the two months after opposition, it will still subtend an apparent disc of 14 arcseconds by the end of November. Dust willing, there should be plenty to see. The south polar cap has been shrinking through the Martian summer and may be undetectable.

For late-evening viewers in early October, the best-known dark feature on the planet slowly swings into view. Syrtis Major is shaped a bit like the Indian subcontinent when viewed with south ‘up’. Usually quite dark, it contrasts with the great pale basin of Hellas to its south, an area noted for clouds and dust storms. By opposition, we should see the exciting ‘Eye of Mars’, Solis Lacus, trailing behind Valles Marineris. Further north is the Tharsis region, with the volcanoes Ascraeus Mons, Pavonis Mons and Arsia Mons. As the evening progresses the largest volcano in the solar system, Olympus Mons, may be glimpsed if seeing allows.

The Mars Mapper 2020–2021 tool (see p.261) can be found on the BAA website under ‘What side of Mars will I see tonight?’ This is an excellent resource, but note that there is no phase shown, nor change in the south polar cap (which may have gone by opposition). See the 2020 Mars opposition blog on the website’s Mars Section pages for up-to-date news and observations.

Jupiter and Saturn are well past their opposition dates of mid-July, but still offer observing opportunities despite their low altitude in the southwest. Jupiter will get closer to Saturn throughout the autumn, with a very rare close conjunction on Dec 21. The crescent Moon forms a triangle with Jupiter and Saturn on Nov 19, very low in the southwest in the early evening.

The Ice Giants, Uranus and Neptune, are now very well placed too. Uranus is at opposition in Aries on Oct 31, just naked-eye from the darkest location around that time, though a full Moon on that date will make it impossible. Subtending a tiny disc of 3.8 arcseconds, only the best imagers will achieve detail, but the moons are more accessible. Titania, Oberon, Ariel and Umbriel are all around 14th magnitude, Miranda a more challenging +16.45 (Figure 6). 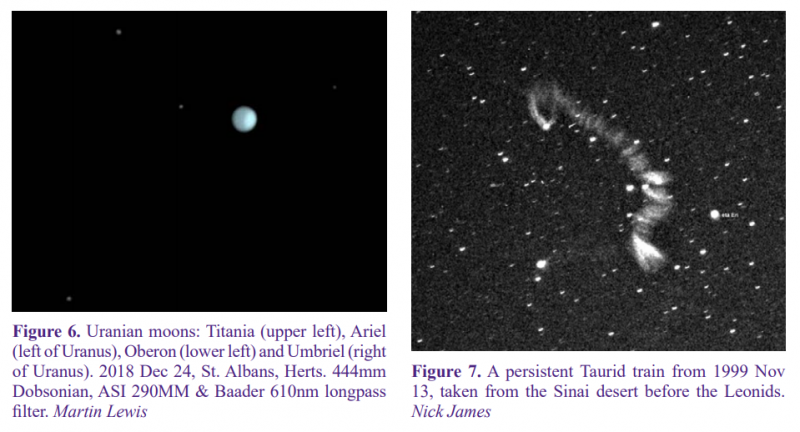 Neptune was at opposition in September, crawling through Aquarius and not yet at the celestial equator, but its magnitude +7.8, 2.3-arcsecond disc should be easily enough found with small telescopes. The largest moon, Triton, is brighter than any of the Uranian system.

Of the more accessible minor planets, only 1 Ceres is available, albeit low in southern Aquarius. This 940km body shines at eighth magnitude, but at a distance of over 2au, no disc can be seen.

After the great excitement caused by C/2020 F3 (NEOWISE) in July, and the interesting fragmentation of C/2019 Y4 (ATLAS) in the spring, we are back to rather underwhelming fare at the time of writing. However, 29P/Schwassmann–Wachmann is at opposition in Aries on Nov 5 so this is a good time to catch it on its 14.8-year orbit. Although generally faint, it is prone to outbursts and indeed one was observed in 2020 August, so it is worth the effort of monitoring.

Whether newly-found comet C/2020 P1 (NEOWISE) will perform, we shall have to see. Discovered in early August of this year by the NEOWISE satellite, it will have ascended from the far south to reach perihelion on 2020 Oct 20. How it fares around this time is, as ever, uncertain. But if it survives, it will be visible low in the dawn sky between Arcturus and Spica. 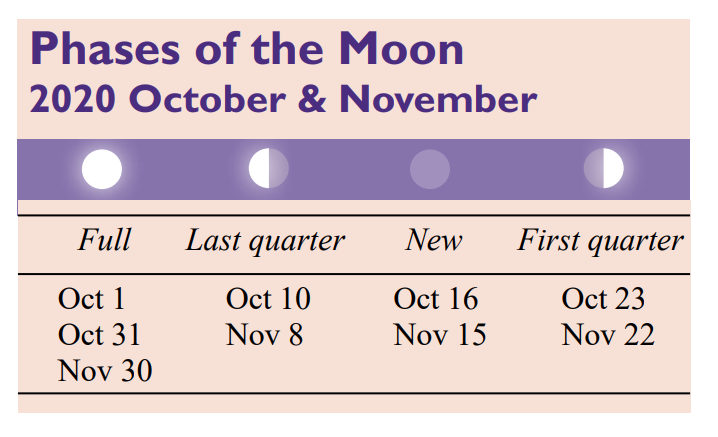 The Orionids are at their best after midnight on Oct 22. Fast-moving and often bright, they are worth observing as no Moon will interfere.

The Southern Taurids are active over a wide time span, from early September to late November, but peak around Nov 5. Deriving from comet 2P/Encke, they are not numerous but are slow and often very bright, as the material is generally more massive than most other cometary debris and can leave a persistent trail (Figure 7). The waning gibbous Moon will be a nuisance.

The Northern Taurids show lasts from late October to early December, peaking around Nov 12. This stream originates from 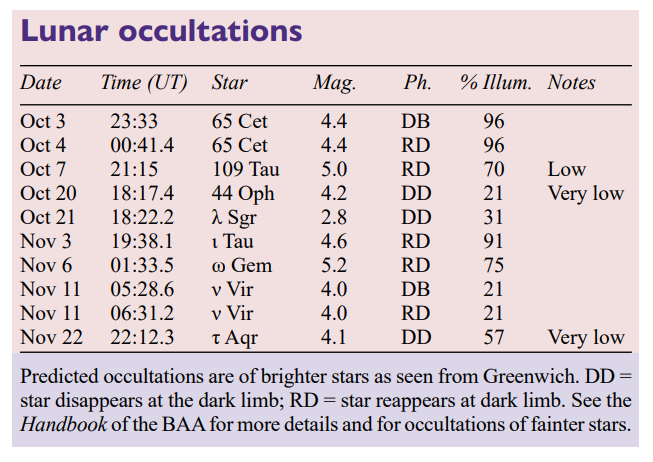 asteroid 2004TG10, an Apollo-group near-Earth asteroid. It is unclear whether it is a fragment of Comet Encke. The waning crescent Moon will not be an issue.

The Leonids are famous for the meteor storms every 33 years and we are now 21 years on from the great display of 1999, although 1998 and 2000 were also excellent. We may not expect a dazzling show, but these swift meteors often produce pretty green trails, with maximum occurring after midnight on Nov 18. The peak is generally very narrow, at around 4 or 5am. This shower derives from 55P/Tempel–Tuttle. The Moon will not interfere this year, being three days old.