With British Summer Time having commenced on Mar 28, evenings are becoming shorter for observing at traditional hours. Let us just hope for the clear skies that we enjoyed in the spring of 2020, while we see a diminution of the restrictions due to the covid-19 pandemic.

We are losing the winter stars Capella and Procyon, becoming lower in the west. Castor and Pollux remain a little higher but will soon slip into the evening twilight. Mars enters Gemini on Apr 24 and passes just north of star cluster Messier 35 on the nights of Apr 25–28. 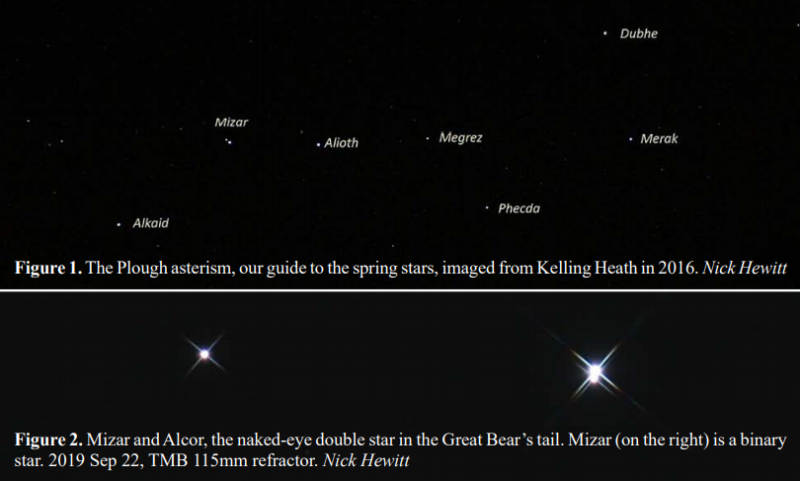 We lose Orion as a guide over this period and in his place we have the ever-reliable Great Bear, Ursa Major. Spring is the season of the bear, as it emerges from hibernation on the northern horizon to reach the zenith by early May. The ‘Plough’ asterism is familiar, but there is a great deal more to this long-tailed ursine (the third largest of all the constellations), with long front limbs stretching south-west and the paws of its very exaggerated hind limbs ending astride Leo Minor to the south.

Dubhe (alpha) and Merak (beta) on the west of the asterism are the ‘Pointers’ to Polaris, our Pole Star, as all good Scouts and Guides know. Following Dubhe through Merak southwards, we pass through Leo Minor (very minor) to the body of Leo, the lion. The eastern stars of the trapezoid of the Plough are Megrez (delta) and Phecda (gamma), also known as Phad. They point at Regulus (alpha Leonis) and beyond to Alphard (alpha Hydrae), the brightest star in Hydra, which is both largest and longest of the constellations. Take a line from Megrez through Dubhe to find Capella (alpha Aurigae); lurking between the bear and charioteer hides the elusive Lynx. Finally, extrapolate from Megrez via Merak to locate Pollux, the brighter of the twins.

The tail of the bear is also useful, as following the curve eastward leads to orange Arcturus (alpha Boötis) and on to icy-coloured Spica (alpha Virginis). The centre star of the tail is the famous optical double of Mizar and Alcor. At 12 arcminutes apart, they are easily split by anyone with good eyesight. Mizar itself is a binary star, the first to be discovered (by Riccioli in 1650), the components being 14 arcseconds apart. Mizar A, Mizar B and Alcor were all later found to be spectroscopic binaries, so zeta Ursa Majoris is quite a family. In fact it is part of an extended family: the Ursa Major Moving Cluster. R. A. Proctor in 1869 noticed the shared proper motion of the five central stars of the Plough (Alkaid and Dubhe are not members) and several fainter stars in the constellation are now known to be part of this nearest, if sparse, star cluster. The 14 or so core stars are at around 80 light-years, making it half the distance to the Hyades. It is also designated Collinder 285.

Ursa Major is a galaxy hunter’s dream, there being so many varied galaxies within the borders. William Herschel alone catalogued 270 or more, and they are often relatively close to the Local Group of galaxies, making them quite large and detailed for the amateur. Several are bright and famous, such as the pair Messier 81 and Messier 82 in the far north-west of the constellation.

M81 is a ‘grand spiral’ discovered by J. E. Bode in 1774 and sometimes known as Bode’s Galaxy. M82 is perhaps the best of the irregular galaxies in the northern hemisphere, showing a dramatic starburst at its centre. Several other galaxies are quite easy to locate due to their proximity to bright stars, such as Messier 108 which lies just south-east of Merak (and in the same low-power field as the planetary nebula Messier 97, the Owl Nebula).

Another galaxy that is easy to locate and shows pleasing detail is the lovely barred spiral Messier 109, lying just east of Phecda. Detail is quite easy to achieve despite its distance of 70 million light-years.

More challenging, but perhaps more awe-inspiring, are a couple of Active Galactic Nuclei (AGNs) in the constellation. Markarian 421 (Mrk 421) is one of the easiest blazars to locate. A line taken from Dubhe through Merak leads to third-magnitude 52 Uma (psi) in the bear’s hind leg; continue south-east until a kite-shaped asterism is located with 51 UMa at its base. Just adjacent to 51 UMa is Mrk 421, by quasar standards just on our doorstep at 400 million light-years distance. It is variable across all wavelengths, but typically ranges from magnitude 12 to 13, so is usually a visual target with a moderate-aperture telescope. It is just a faint ‘star’ in appearance, but one of the most distant visual targets to show people at star parties. 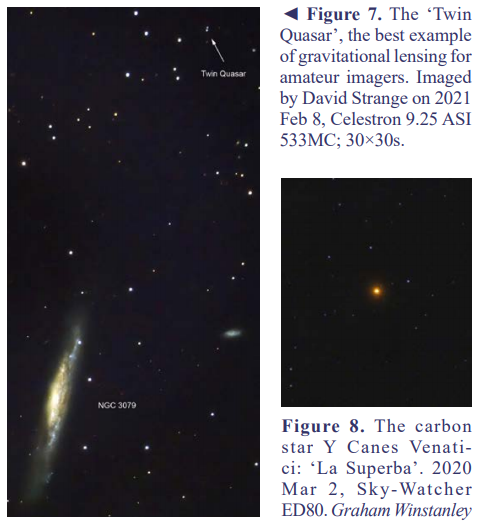 An example of gravitational lensing can be found in Ursa Major in the form of the ‘Twin Quasar’. This extraordinary object is faint at magnitude ~16.6, but has been imaged by amateurs. It is designated Q0957+561 and lies near to the 10th magnitude barred spiral galaxy NGC 3079, to the west of Dubhe and Merak. The quasar was discovered in 1979 and was the first known to demonstrate gravitational lensing, the single quasar lying behind the galaxy YGKOW G1. The gravity of this giant elliptical galaxy, aided by other galactic cluster members, splits the light from the quasar into two components just six arcseconds apart. The quasar is a staggering 8.7 billion light-years away, the type-cD galaxy a mere 3.7 billion.

Closer quarry can be found lying below the tail of the bear in Canes Venatici. The hunting dogs have a fine collection of galaxies to enjoy with smaller telescopes, including the great Whirlpool (Messier 51) – the best and easiest to locate, just south-west of Alkaid, the final star in the bear’s tail. Messiers 106, 63, & 94 are nearby and easy to track down.

The 5th magnitude semiregular variable carbon star Y Canes Venatici is spectacularly red, so much so that it was nicknamed ‘La Superba’ by Angelo Secchi, the description due more to its spectral than visual appearance. It sits north of beta CnV and varies little enough to be an excellent binocular target throughout its range (5.2 to 6.6, over 157 days).

South of these hounds we can enjoy the starry braids in Coma Berenices (Berenice’s Hair), with the sprawling Coma Star Cluster dominating 7° of the northern aspect of the constellation; despite having only 40 members it is a fine sight in binoculars. Galaxies abound too, especially on the southern border with Virgo where we can enjoy Messiers 85, 91, 98, 99, & 100. (See p.121 of the current Journal for Stewart Moore’s guide to M98 & M99.) This area, the ‘Realm of the Nebulae’, is the northern component of the Virgo Galaxy Cluster, the richest part of our local supercluster. So many galaxies, so little time!

Disappearing into the western twilight are Gemini, Auriga and Canis Minor; their treasures will have to wait until next winter. In compensation, rising higher in the east we find that Boötes the herdsman, dominated by brilliant Arcturus, leads Corona Borealis and Hercules, with Vega (alpha Lyrae) close behind proving that summer’s short nights are approaching. 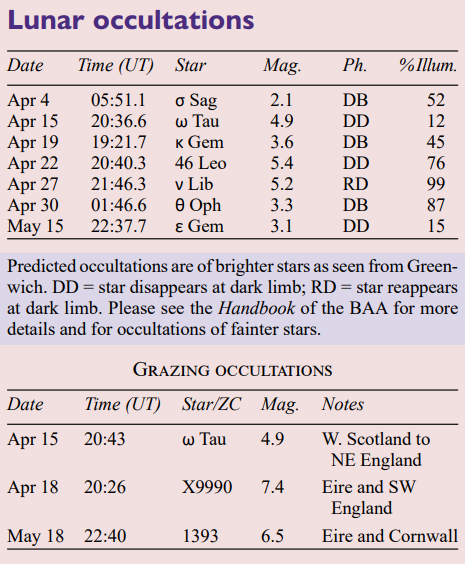 Although an improvement on February and March, the planetary scene remains rather poor this spring. However, Mercury has a good evening showing in May.

Mercury is at superior conjunction on Apr 19, but adopts a reasonable evening position by the end of the month. It can be glimpsed close to Venus low in the north-west late in April and then ascends to have its best apparition of the year, eastern elongation occurring on May 17 when the eight-arcsecond disc sets well over an hour after the Sun. Another close encounter with Venus occurs at the end of May as Mercury descends towards inferior conjunction on June 11, and Venus adopts a more prominent position as spring gives way to summer. The two inner planets will be just a Moon-diameter apart on May 28, although extremely low after sunset.

Venus was at superior conjunction on Mar 26 so slowly emerges into the evening sky during April and May. The small nine-arcsecond disc of April will be almost fully illuminated and a bright magnitude –3.9, but observation will be difficult due to proximity to the Sun. But matters improve a little in May as Venus pulls away from Taurus at the end of the month. We shall have to wait until the autumn for Venus’ best show.

Mars remains an evening planet in Taurus but is now such a small orange disc, of around five arcseconds, that details will be hard to come by. The planet passes close to Messier 35 while moving into Gemini at the end of April and although conjunction is not until October, the open season on Mars is over for the vast majority of observers. Nevertheless, with so many probes and landers being sent from Earth, the Red Planet will remain very much in our thoughts. 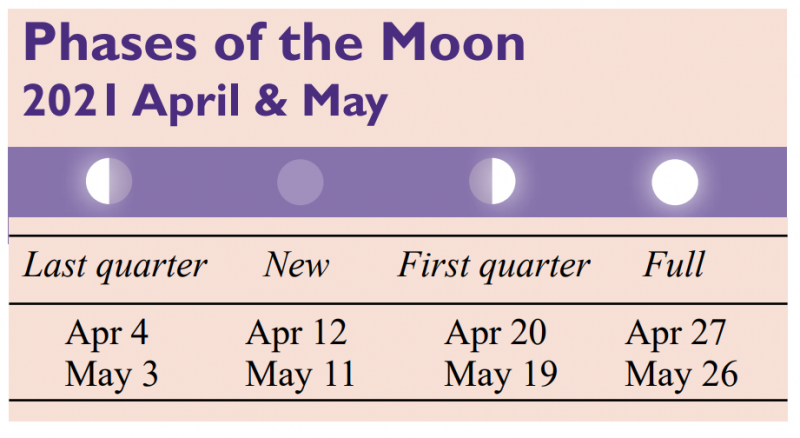 The gas giants are morning objects with Saturn, now in Capricornus, rising ahead of Jupiter. Both remain low in the south-east, joined by the last quarter moon that lies below and between them at dawn on May 4.

Of the ice giants, only Uranus is available and then only through April in the evening twilight.

(4) Vesta is well-placed in Leo at magnitude 7.0, and (3) Juno will rise with Ophiuchus at the end of May, a more difficult target at magnitude 10.

The maximum of the April Lyrids shower occurs on Apr 22 and the first quarter moon should not be too much of a nuisance. The radiant is now in eastern Hercules and the shower is worth observing for possible enhanced activity. The eta Aquarids of May derive from comet 1P/Halley and should peak on May 6, with the radiant just east of Jupiter this year and the waning crescent Moon not too much of a hindrance.

There are no bright comets anticipated at the time of writing.