With the longer nights of later summer, the Milky Way and its riches are at their best for UK observers. The Via Lactea is now splendid, arching from the south-west via the zenith to the north-eastern horizon. Embedded in the glow of our galaxy lie the summer birds, the swan and eagle, with their primary stars Deneb and Altair contributing to the famous Summer Triangle asterism along with brilliant blue Vega in Lyra. From dark sites when the Moon is absent, the striking dust lanes of the ‘Great Rift’ are obvious, particularly to the west of Altair. 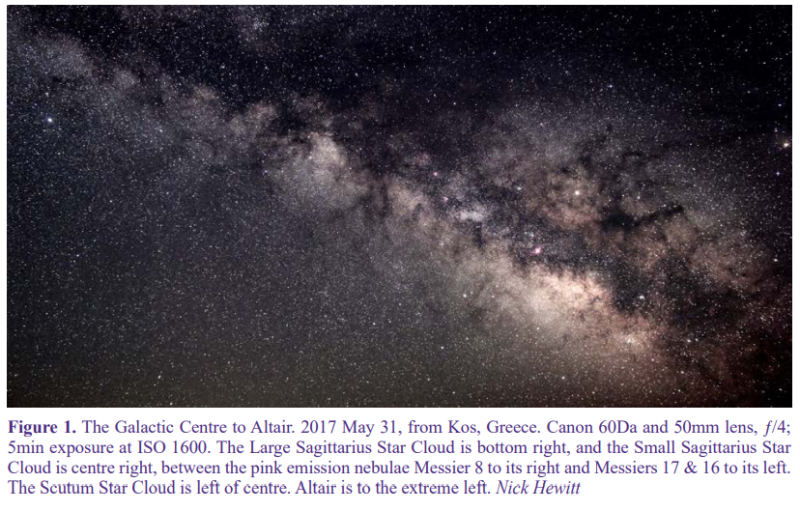 While our galaxy is likened to a milky cloud, the portion to the extreme south has been described as steam and indeed, the ‘kettle’ asterism of Sagittarius has clearly just boiled, the steam pouring from the spout (comprised of gamma, delta, and epsilon Sagittarii). This quite marked asterism is always awkward even from the most southern parts of Britain, never rising more than a few degrees above the southern horizon. But the steam flows high towards Altair and contains wonderful things for optics of all types.

It is worth sweeping from the south to the zenith. The most southerly target is the Great Sagittarius Star Cloud: the central portion of our galaxy. Although not well seen from the UK, it offers grand viewing from more southerly latitudes. A little higher we encounter the Lagoon Nebula (Messier 8), a fine cluster associated with a complex emission nebula worthy of several nights of study. Slightly further on we find the Trifid Nebula (Messier 20), with its striking dark divisions; in images there is a wonderful colour contrast between the emission component and the ghostly reflection to its immediate north (Figure 2).

Slew to the east of these famous nebulae to spot a spectacular globular star cluster: Messier 22, the Great Sagittarius Cluster. If higher in the sky from the UK, it would outperform Messier 13 in Hercules as it is brighter, larger, and closer to us. Back into the steam, we pass the easy open clusters Messier 25 & 23 straddling the Small Sagittarius Star Cloud (Messier 24).

A further sweep north encounters the rather poor open cluster Messier 18, and another pair of summer birds: Messier 17 (a swan to some, an omega to others) and Messier 16, the Eagle Nebula, with its famous ‘Pillars of Creation’ as captured by the Hubble Space Telescope. Continue the tour with the bright Scutum Star Cloud and the spectacular Wild Duck Cluster, Messier 11. (See the 2020 August [130(4)] Sky Notes.)

North-east of Scutum we reach Aquila, the eagle. This is a constellation that contains many joys, but some are quite challenging, especially the many small planetary nebulae that decorate the area. We then pass the small constellations of Vulpecula (the fox, nowadays without its goose) and Sagitta the arrow to find Cygnus flying overhead.

The swan is full of riches and the distinctive ‘Northern Cross’ asterism makes touring this brilliant constellation easy. Favourites on show are the beautiful double star Albireo at the foot of the cross, the supernova remnant consisting of the Filamentary and Veil Nebulae near epsilon Cygni, the Wolf–Rayet star forming the Crescent Nebula (NGC 6888) close to gamma Cygni (Sadr), and the North America Nebula (NGC 7000) with the Pelican Nebula (IC 5070) forming a large complex that nestles east of Deneb. From light-polluted sites, these can be more dramatically captured using hydrogen-alpha filters, which bring out the contrast between the bright star fields and dark nebulae that abound here. The so-called ‘Gulf of Mexico’ in the North America complex is just such a dark molecular cloud, the absence of stars being quite marked (Figure 3).

One glorious and colourful sight for small telescopes is the wide optical triple system of 31 Cygni (or omicron1 Cygni). The group can easily be located between Deneb and delta Cygni, with orange eclipsing binary 32 Cygni (omicron2) slightly to its north. The golden primary of 31 Cygni is also an eclipsing binary of the Algol type, generally magnitude 3.73 but with a long period of some 10.4 years! Another eclipse is due soon and while the amplitude is not dramatic (0.12), it will be of interest to professionals as the orange supergiant’s thin atmosphere can be studied while the blue-white B-type star is eclipsed over 63 days. It is the aesthetic pleasure of the colour contrast of the gold and two tints of blue that is so attractive to amateurs. Bluish 30 Cygni (magnitude 4.8) is just a tenth of a degree to the north and forms a bright triple with 31 Cygni and HIP 99676 (magnitude 7).

In the west we find Arcturus gently pulling Corona Borealis and Hercules from the late summer sky, while in the east, Pegasus and the ‘watery’ constellations of autumn become increasingly prominent. This year the area is dominated by the gas giants – Saturn in Capricornus (the sea goat) and Jupiter in Aquarius (the water bearer). With Pisces and Piscis Austrinus pursued by Cetus in the east towards the end of September, we sense that autumn will soon be upon us.

August and September are not the best times of year for mid-evening lunar observation as our companion world remains low in the sky, although this can give rise to spectacular photographic opportunities. The nearly full Moon will bisect Saturn and Jupiter on Aug 21 and will be gibbous when it repeats this on Sep 17.

There have been definite signs of the Sun waking up after oversleeping. A few sunspot groups have drifted across the disc over the summer and detailed prominences have been captured. The autumn equinox occurs on Sep 22. There are no eclipses in 2021 August or September. 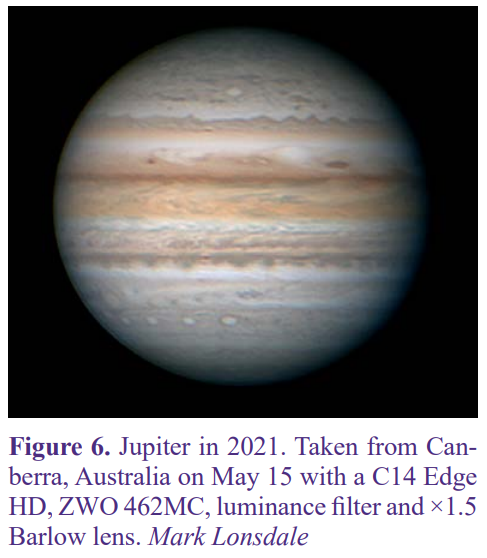 Mercury is an evening planet for much of the period, following superior conjunction on Aug 1, but it never reaches any great altitude and is in a bright sky. The planet reaches greatest eastern elongation on Sep 14 when 27 degrees from the Sun, but it is then low. Mercury reaches inferior conjunction on Oct 9.

Venus is also in the evening sky, moving from Leo into Virgo in August and then into Libra at the end of September. Although visible throughout both months, a good western horizon is needed as it is so low. The gibbous phase diminishes from 0.8 to 0.6 arcseconds and the apparent diameter grows from 13 to 19 arcseconds as the planet creeps towards eastern elongation on Oct 29, when it scrapes the horizon in Sagittarius. Not one of Venus’ best apparitions.

Mars begins August both tiny (3.6″) and low, before being gone for all intents and purposes until 2022. The planet reaches solar conjunction on Oct 8.

Jupiter should make up for the difficulties with the rocky planets, coming to opposition on Aug 19 in western Aquarius and at a rather higher altitude than in the past two years. At magnitude –2.9 and in an area of sky devoid of brilliant stars, it cannot be overlooked. Try to observe the mutual phenomena of the Galilean moons, which are endlessly fascinating. For example, we can look forward to a double transit on Aug 22, when Europa and Ganymede pass across the gas giant’s disc; Callisto’s shadow transits on Sep 17. On Oct 4, a transit of the shadows of both Ganymede and Callisto can be seen in the early to mid-evening. 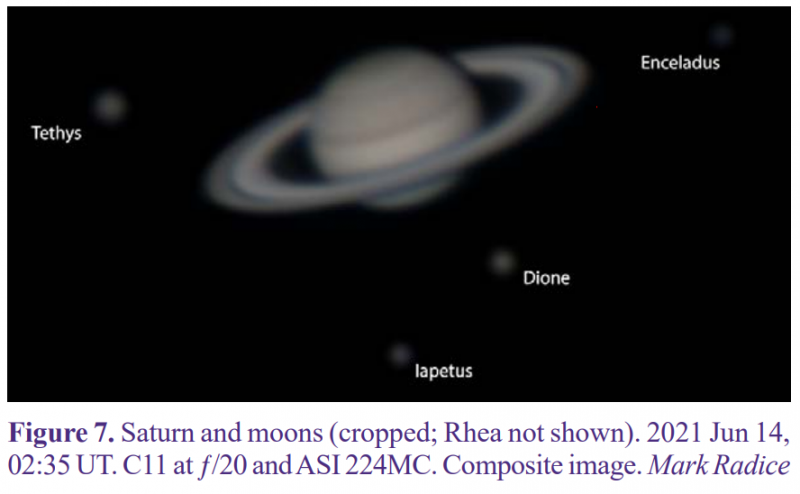 Saturn reaches opposition before Jupiter, on Aug 2. Remaining in Capricornus, the ringed planet is still quite low from the UK and the rings are slowly closing up. The Seeliger effect should be seen at the beginning of August. Finding the Saturnian moons can be fun. See the challenge set by Paul Abel and Pete Lawrence at the Winchester Weekend Webinar (britastro.org/node/25889).

Uranus is available again and reaches a good altitude by the end of September, when in southern Aries. The 3.8-arcsecond, magnitude 5.7 disc and Uranian moons are now being imaged successfully by several accomplished observers.

Neptune comes to opposition in eastern Aquarius on Sep 14, lying below the Circlet of Pisces. Triton, at magnitude 13.45, should be possible to see with adequate apertures and fairly easily imaged. In contrast, Nereid is exceedingly difficult at magnitude 18.5. It took a photograph by Gerard Kuiper, using the 82-inch at McDonald Observatory, to discover the second moon of Neptune in 1949. It is now ranked as only the third largest of the Neptunian system, Triton and Proteus being larger. Imagers, the gauntlet is thrown.

Asteroid (2) Pallas comes to opposition in Pisces on Sep 11. This 440km world will be a binocular target at magnitude 8.5. 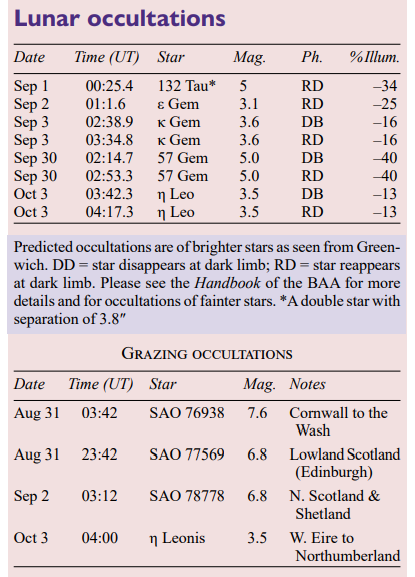 This year the Perseids should be favourable, weather willing. The peak on the night of Aug 12–13 will occur after the crescent Moon has set.

The kappa Cygnids peak around Aug 17. This tends to be a weak display, although it may provide a ‘sporadic’ or two during the Perseid watch.

At the end of August, the alpha Aurigids (radiant now near theta Aurigae) peak on Aug 31, but will be compromised by the Moon. The parent body is comet C/1911 N1 (Kiess). Occasional outbursts occur, but this year activity will be hard to determine. The epsilon Perseids (or ‘September Perseids’, to avoid confusion), radiating from near Algol, peak on Sep 9 and with the Moon absent they will be more favourable. 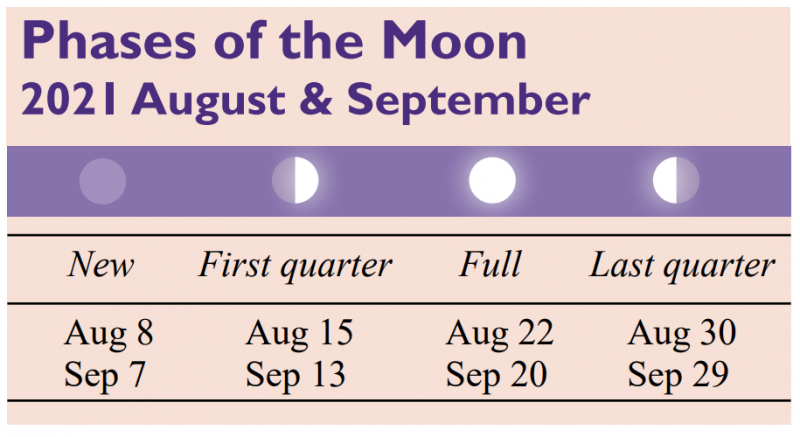 Although no bright comets are anticipated in August or September, an old friend makes a reappearance. Comet 67P/Churyumov–Gerasimenko will be in Pisces in early August, moving into a better position in Taurus by the end of September. How bright it will be is uncertain, as always with comets, but it should be observable. This now famous periodic comet, so wonderfully imaged by Rosetta, comes to perihelion on Nov 1.