The long winter nights are with us again and astronomers hope for clear, sparkling, star-studded skies. In early December, we have two signposts to guide us. To the west of the meridian in the early evening, Pegasus remains high and helps us to master the late-autumn watery constellations of the sea-goat (Capricornus), water-carrier (Aquarius), various fish and the whale (Cetus). In the west, but still surprisingly high, hovers the Summer Triangle of Vega in Lyra, Deneb in Cygnus, and Altair in Aquila; these however become less accessible as the year ends.

As we approach the turn of the year, we have magnificent Orion as our guide to the brilliant winter patterns. Betelgeuse, alpha Orionis, is the red supergiant that intrigued us in 2019–’20 by dimming in optical wavelengths, but has now stabilised to magnitude 0.5; nevertheless, it is well worth keeping an eye on it for further erratic behaviour. Follow the belt stars northwards to Aldebaran (the ‘Eye of the Bull’) and the joys of Taurus await, or southwards to scintillating Sirius, the brightest star in the heavens (other than the Sun of course) to explore the plethora of open clusters in the region.

Either Pegasus or Orion can be used to locate the hero Perseus. This splendid chap is full of interest. From Markab (alpha Pegasi), follow through Alpheratz and Almach (alpha and gamma Andromedae) to arrive at Perseus’ brightest star, Mirfak. This pale-yellow F-type star is a magnitude 1.8 supergiant. Unremarkable in many ways, it nestles within the Alpha Persei Cluster (Melotte 20 or Collinder 39), the grouping being a fine sight in binoculars. Mirfak is a member, and the cluster has an accurately known distance of some 560 light-years; it is thus an important ‘standard candle’ for measuring distances to other open clusters.

One of the most fundamental variable stars lies not far from Mirfak. Algol, the ‘Winking Demon’, represents the severed head of Medusa and lies nine degrees south of Mirfak, forming a triangle with that star and Almach (magnitudes 1.75 and 2.15, respectively). Algol is the most famous eclipsing binary in the heavens and is easily shown to be variable when it dips from magnitude 2.1 (like Almach) to 3.4, for 9.6 hours every 2.86 days. Dates and times of primary minima may be found in the Handbook of the BAA. Once you have estimated Algol’s brightness, sweep a little northwest and find the splendid open cluster Messier 34. From a dark location, M34 can be discerned with the naked eye, being magnitude 5 and covering an area similar to that of the full Moon. The brightest stars, predominantly white, are magnitude 7 and so this is a fine target for binoculars and small telescopes. For the experts, the faint planetary nebula Abell 4 lies less than a degree to the east.

East of Mirfak lies one of the season’s real gems. In fact comprising two jewels, the Double Cluster represents the sword handle of Perseus in many constellation figures. What a weapon! However, in several artistic interpretations the two objects coincide with the hero’s head. NGC 869 and NGC 884 are 7,500 light-years from us and a mere 12 million years old. Although most of the brightest stars are blue-white supergiants, NGC 884 contains several variable red supergiant stars which show up well on photographs.

As the Earth trundles along in its orbit, Perseus is replaced at the zenith by Auriga, the charioteer. Its brightest star is Capella (alpha Aurigae), so bright that it cannot be overlooked, but if a guide is needed, find the Belt of Orion and follow upwards between Orion’s shoulders (Betelgeuse and Bellatrix) to locate the sixth brightest star in the night sky. If chariots conjure up visions of Ben-Hur or Boudicca, think again. Firstly, the charioteer seems to have lost his vehicle in most depictions and instead of weapons of war he holds – goats! The Babylonian original was associated with a herd of goats, the four-horse war chariot being added by the Greeks. Numerous legends are associated with the constellation, but the goats remain, Capella being nicknamed the ‘Goat Star.’

To the yellow giant’s west lie ‘the Kids’, an isosceles triangle made up by epsilon, eta and zeta Aurigae, all third magnitude. Epsilon is a fascinating star that undergoes a prolonged dip in brightness every 27 years, fading by a magnitude for around two years. This dimming last occurred in 2009–’11, so unfortunately we will not see the phenomenon again until 2036. It is thought that a huge disc surrounding a tight binary pair orbits the post-asymptotic-giant-branch supergiant primary star, but there is no certainty about this. 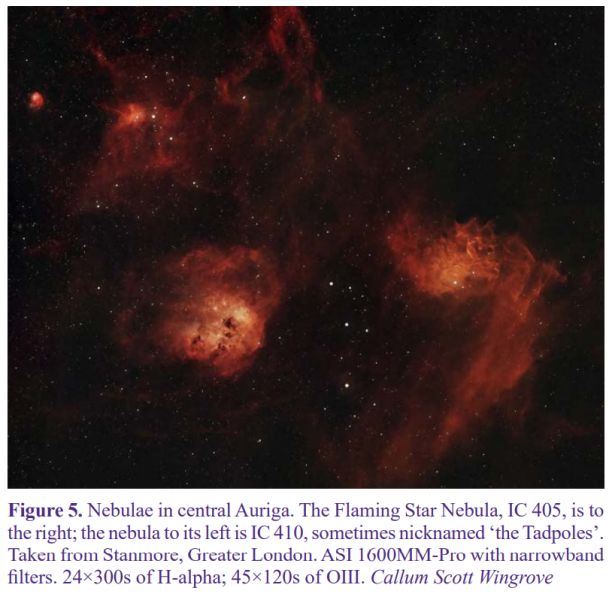 Within Auriga lie three of the easiest open clusters for small telescopes: Messiers 36, 37 and 38. They are all bright but are quite varied. Messier 37 is the richest and a dazzling sight in a large telescope, but M36 and M38 are also excellent.

A considerably more challenging target is the Flaming Star Nebula, IC 405: a mix of emission and reflection nebulosity that surrounds AE Aurigae, a 6th-magnitude O-type star that escaped the Orion Nebula some two million years ago. It is thought that it may have been one component of a multiple star involved in a ‘collision’ with another multiple system, possibly iota Orionis. It is likely that mu Columbae and 53 Arietis were the other components, flung far in other directions by this star crash. AE itself is flying through the nebula that it now illuminates. In the area are other emission nebulae, the brightest being IC 410, which is 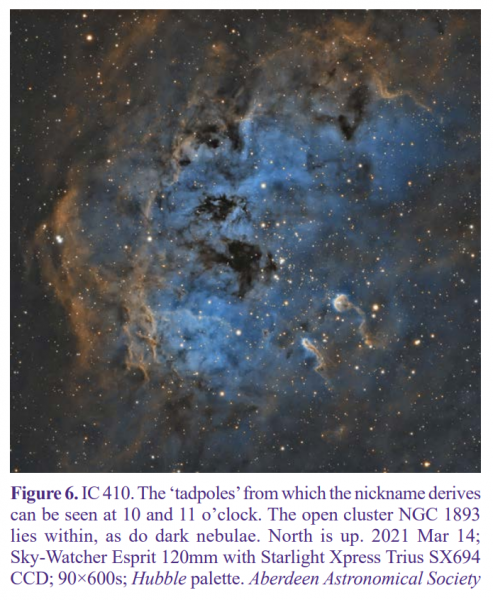 nicknamed the ‘Tadpoles Nebula’ due to two quite bright comet-like nebulae within (see Figure 6).

Reverting to Orion as our signpost, start from Rigel and travel through the central belt star (Alnilam); we reach Gemini’s two first-magnitude stars. Castor is to the north of Pollux and slightly fainter, but it is a fascinating multiple-star system [see 131(1), p.60 (2021)]. Gemini is the peak of northern zodiacal constellations and will be available until April.

To the north, Ursa Major lies low until the spring, but it will chase Cancer (the crab) and then Leo (the lion) higher as this bimonthly period progresses.

There is a total eclipse of the Sun on 2021 Dec 4, but it is only visible from Antarctica so is unlikely to be seen by many people (and penguins will not care).

The months straddling Christmas are poor for the observation of most of the planets, the exceptions being the ice giants Uranus and Neptune. 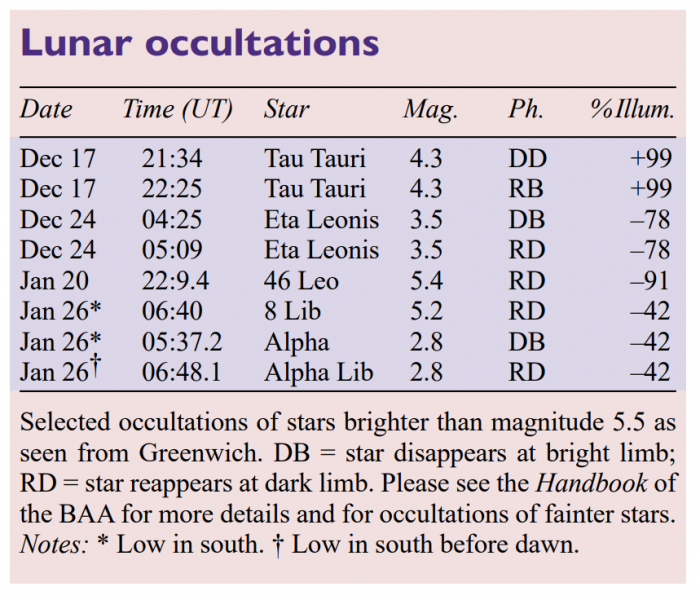 Mercury has a poor evening showing in early December following superior conjunction on Nov 29. Low in the west at twilight, the small disc shines at –1.2 but will not be easy to spot against the bright evening sky. By the New Year it lies some nine degrees east of Venus and it becomes more prominent at eastern elongation on Jan 7. The innermost planet then races to pass north of the Sun at inferior conjunction, thereafter appearing in the morning sky, although still low down.

Venus begins December low in the evening sky but is now well on its way to inferior conjunction on Jan 8. Most brilliant on Dec 9 when at –4.7, the planet is lost in the gloaming in the southwest as it plummets to pass between Earth and the Sun, before rapidly reappearing in the dawn sky low down in Sagittarius.

Mars is now a morning planet traversing Libra but scraping the horizon, and although near Antares as 2021 ends, 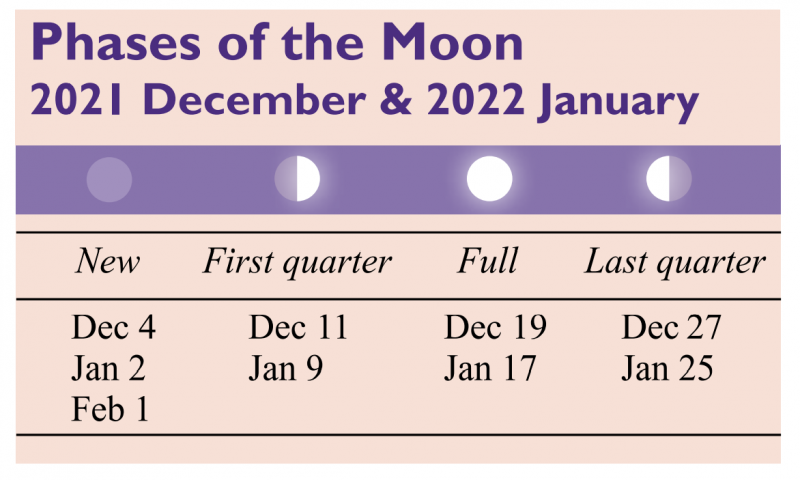 comparisons with its ‘rival’ Venus will be impossible to make. Its tiny disc is only four arcseconds in diameter, so serious observation will have to wait.

Jupiter becomes lower in the southwest every evening, becoming more difficult to observe as it does so.

Saturn, to the west of Jupiter, descends into the evening twilight. On Dec 8, the crescent Moon joins the planet in Capricornus, with Venus low to the west and Jupiter to the east. Given a good southwest horizon, this is perhaps a good photo opportunity.

Of all the planets, Uranus is best placed for observation, high up on the meridian in Aries at mid-evening. Neptune is also well placed in eastern Aquarius in early December, but dips into twilight by the end of January.

Arguably the premier meteor shower of the year, with a zenithal hourly rate (ZHR) of 100+, the Geminids peak before the dawn of Dec 14. Unfortunately, the mid-to-late evenings of Dec 13 & 14 will be compromised by a bright gibbous Moon. However, the Geminids are typically slow and often bright, so observing is to be encouraged.

The Quadrantids usually have a sharp peak on Jan 4 and the Moon is just past new, so will not interfere. The radiant is in northern Boötes, the Quadrans Muralis constellation having been discarded by the IAU in 1922. The parent body is uncertain. With a potential ZHR of 80+, it is worth getting cold for. 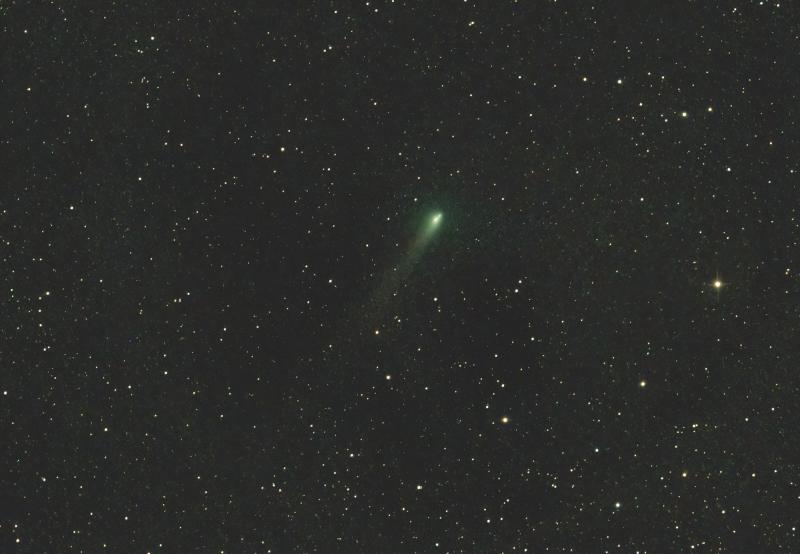 67P/Churyumov–Gerasimenko is the comet made famous by the encounter by European Space Agency probe Rosetta and its lander Philae between 2014 and 2016. The comet has returned and remains well-placed either side of New Year, moving within Cancer.

Discovered on 2021 Jan 3, C/2021 A1 (Leonard) is an inbound long-period comet and on Dec 12 it will be 0.233au (34.9 million km) from Earth. With perihelion on 2022 Jan 3, the comet could reach naked-eye visibility in December. If it reaches an apparent magnitude of 4, it should be a good binocular comet low in the morning sky, east of Arcturus, passing the globular cluster Messier 3 in Canes Venatici before dawn on Dec 3. After perihelion, the comet will be ejected from the solar system. In recent images, it is showing signs of a dust tail.