The short nights of the summer months can be frustrating and with the summer solstice occurring on Jun 21, for astronomers in the UK there is rarely a midsummer night’s dream observing session. However, we may again be treated to the beautiful noctilucent clouds that graced our northern aspect in 2020. These highest of ice crystal clouds are best seen during astronomical twilight and are most often enjoyed from more northern latitudes, from the end of May through to July. Look in a northerly direction and try to report any sightings.

In early June we still have the late spring stars on show, with Ursa Major high in the west, the tail curving an arc to Arcturus in Boötes, the herdsman. Following this curve we reach Spica in lower Virgo. Leo is now low in the west at dusk, but beneath the bear’s tail, the hunting dogs (Canes Venatici) and Coma Berenices, both stuffed full of accessible galaxies, remain prominent into the wee hours.

High above us, the celestial dragon replaces the bear at the zenith. Draco slinks in a rather amorphous manner above us, spilling into the north towards Ursa Minor and Polaris. Although not very prominent, there is plenty of treasure to be looted in the constellation and it being so high, we are in a good season to search for it. 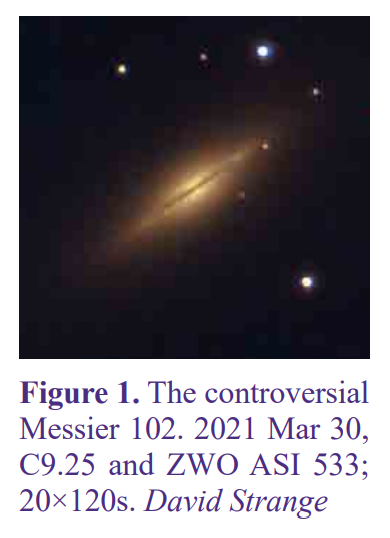 Draco only has one Messier object, and a controversial one at that. Messier 102 (NGC 5866) is a spindle galaxy, its almost perfectly edge-on dust lane being a fine feature. It seems to be part of a small galaxy group with NGC 5907 and 5879. It was discovered by Pierre Méchain and included by Messier in his catalogue in 1781, after he almost certainly observed it himself. However, Méchain felt that Messier’s observation was a repeated observation of Messier 101, a very different-looking galaxy. Controversy raged for many years, but NGC 5866 is now generally given the Messier catalogue number of 102 (Figure 1).

Another historic gem to be unearthed is the Cat’s Eye Nebula, NGC 6543, a bright planetary nebula best located by finding the lozenge-shaped ‘head’ of the dragon formed by beta (Rastaban), gamma (Eltanin) and xi (Grumium). Hop from Eltanin to Grumium and follow through for a similar distance; the pretty object should then be easily found. It was this nebula that pioneer spectroscopist Sir William Huggins viewed in 1864 to conclude that planetary nebulae were made of tenuous ionised gas. The 20-arcsecond core is 8th magnitude and with a high surface brightness, but there is a very faint outer halo with condensations that modern imagers are capturing (see Figure 2). 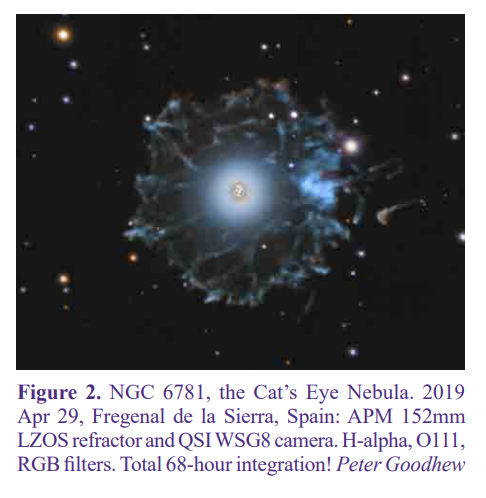 Other draconian targets on offer are mu Draconis (Alrakis), easily located near the head of Draco. A testing binary, it is in fact a multiple system. The two visible stars combine for a magnitude of 4.9, each component being 5.6. They are post-periastron and slowly widening, currently being 2.1 arcseconds apart. Their recent change in position angle has been relatively rapid, so they represent a fine challenge. The orbital period is thought to be 672 years. Mu Draconis B is a spectroscopic binary, and in addition there is a faint common-proper-motion component of 13th magnitude lying at 14 arcseconds. Much easier is a fine wide double star, also located in the head. Nu Draconis is a common-proper-motion pair of almost identical white stars of magnitude 4.9, that can be split with binoculars as they are just over an arcminute apart.

By the end of June, the southern meridian is dominated by Hercules and Ophiuchus, with their plethora of fine globular clusters that make excellent targets for those not-quite-dark midsummer nights. Corona Borealis, the northern crown, supplies interest just to the west of the meridian with its two famous variables, R and T Corona Borealis. Down towards the horizon we have the northern aspect of Scorpius, dominated by red supergiant Antares.

Between galaxy-rich Virgo and the summer Milky Way lies the only ‘inanimate’ Zodiacal constellation which, on balance, one would have to regard as dull. Libra has little of interest, with no Messier objects (Aries is the only other zodiacal constellation to share this ignominy), no open clusters or nebulae and fairly undistinguished galaxies. Its main claim to fame is its allegedly green naked-eye star, the only single star to be described thus, mainly by Victorian observers such as T. W. Webb and W. T. Olcott. Zubeneschamali (beta Librae) is the brightest star in the constellation at 2.6 and used to be the ‘northern claw’ of the scorpion until Libra was separated from the arachnid by the Romans. Most stars described as green are companions of orange or red stars, the contrast being the cause. What do you think about this singleton? 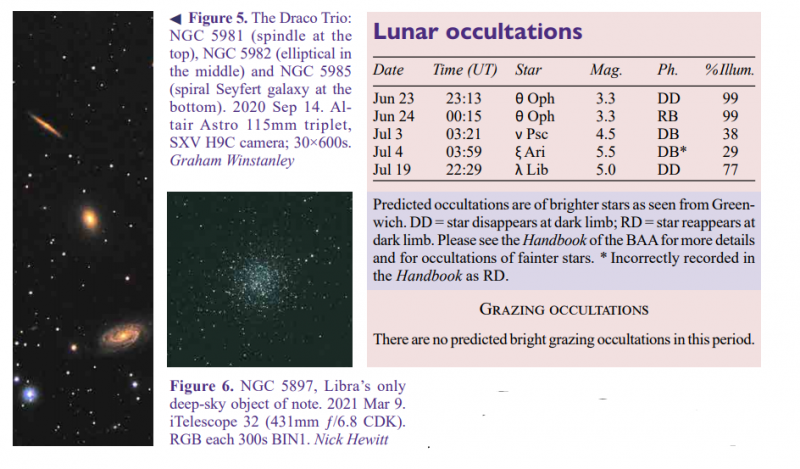 The only deep-sky object of interest is the globular cluster NGC 5897, which may be observed with difficulty in the summer twilight (Figure 6). This large, weakly condensed glow, low in the summer gloaming, can be difficult but shows up better using higher magnification where contrast is improved. It was discovered by Sir William Herschel, possibly in 1784 or more likely in 1785.

Serpens lies astride Ophiuchus, the head (Caput) observed in late spring and the tail (Cauda) in midsummer, with the rich star cloud in Scutum to the south-east. In Serpens Caput we find Messier 5, one of the sky’s great globular clusters, lying conveniently close to 5th magnitude 5 Serpentis, so easily located. To the east, Serpens Cauda boasts the magnificent Eagle Nebula, Messier 16, with its bright open cluster and ‘Pillars of Creation’, made famous by the Hubble Space Telescope.

Vega in Lyra leads the Summer Triangle (Vega, Deneb, and Altair) in the east. By now it is high up, although best viewed as the days draw in from August through October. By late July we see that the early autumn stars are rising – Aquarius low in the south-east, with aerobatic Pegasus dragging Andromeda into the eastern sky. 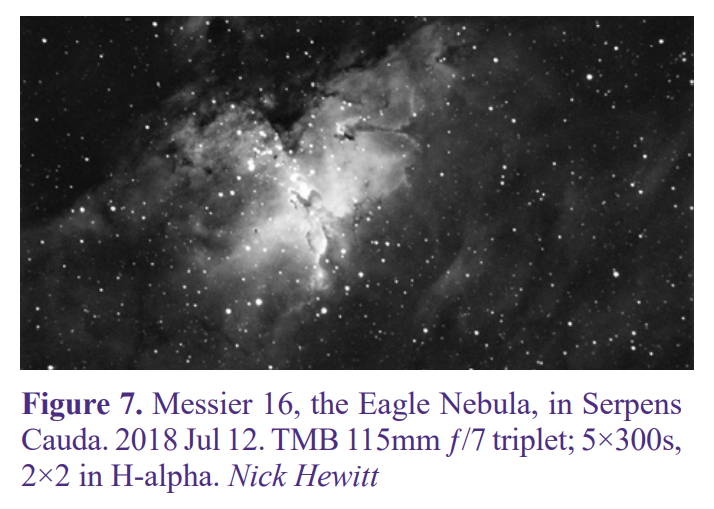 This time of year is not optimal for lunar observation, as the Moon remains low above the southern horizon.

The high altitude and long summer days should encourage observers to enjoy the Sun, looking for increasing activity. But solar observing when done incorrectly is extremely dangerous, so every care should be taken.

There is a solar eclipse on 2021 Jun 10, annular from a track that starts in north-east Canada, passes over western Greenland and ends over eastern Russia. It will be partial from the UK. The maximum obscuration is at 10:13 UT (11:13 BST) in London, when 20% of the Sun will be covered by the Moon. The further north the observer, the greater the obscuration will be, so in Aberdeen it will be 32%. See the Pete (Lawrence) & Paul (Abel) Observers’ Challenge from the 2021 Winchester Day webinar, which you can find on the BAA’s YouTube Channel via britastro.org.

Mercury ends May close to Venus in the evening dusk, but at magnitude 2.2 it will be very hard to find despite the proximity to its brilliant fellow inner planet. It begins June very low and to the west of Venus, before reaching inferior conjunction on Jun 11 and thereafter having a poor morning apparition. The very slender waning crescent Moon is nearby on the morning of Jul 8 and the speedy innermost planet will reach superior conjunction on Aug 1.

Venus is now in the evening sky again, but rather poor in comparison with the spectacular show of 2020. Although close to faint Mars on Jul 13, it will be so low as to make observation of the conjunction nigh-on impossible.

Mars is low in evening twilight and poor throughout. Its four-arcsecond disc and increasingly low altitude means that for most, observation will have to wait until way past its conjunction with the Sun in October.

Jupiter is a morning planet in Aquarius and will be bright in the south-east before dawn throughout June and July. This a particularly good time to observe the eclipses, transits and ‘mutual phenomena’ (see p.72 of the April Journal) of the Galilean moons Io, Europe, Ganymede and Callisto. 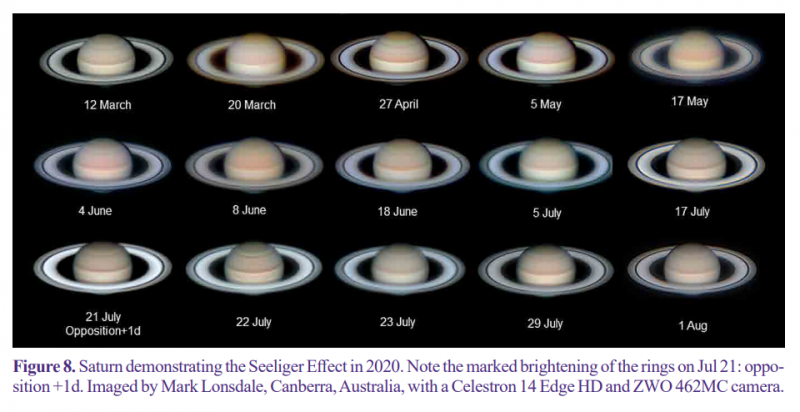 Saturn is also in the morning sky, rising in central Capricornus before Jupiter but not achieving any great altitude. The ringed planet reaches opposition on Aug 2, when the equatorial diameter will be 18.6 arcseconds and the rings a splendid 42.2 arcseconds. Note the brightening of the rings in late July, a phenomenon known as the Seeliger Effect or the Opposition Surge. The notable additional brilliance of the rings a day or two either side of opposition occurs when the phase angle approaches zero (Figure 8).

Uranus and Neptune are not observable in June but both appear in the July sky, Neptune being to the east of Jupiter one the Aquarius-Pisces border, and Uranus dawdles behind in Aries, although reaching a favourable altitude north of the celestial equator.

Pluto is at opposition on Jul 17 in Sagittarius, but at magnitude 14.3 and being low in the midsummer sky’s haze it will be hard to observe. Better placed are two smaller bodies. Asteroid (3) Juno is in Ophiuchus and well placed at magnitude 10, while (2) Pallas will be reasonably high up in Pisces at the end of July at magnitude 9.5. 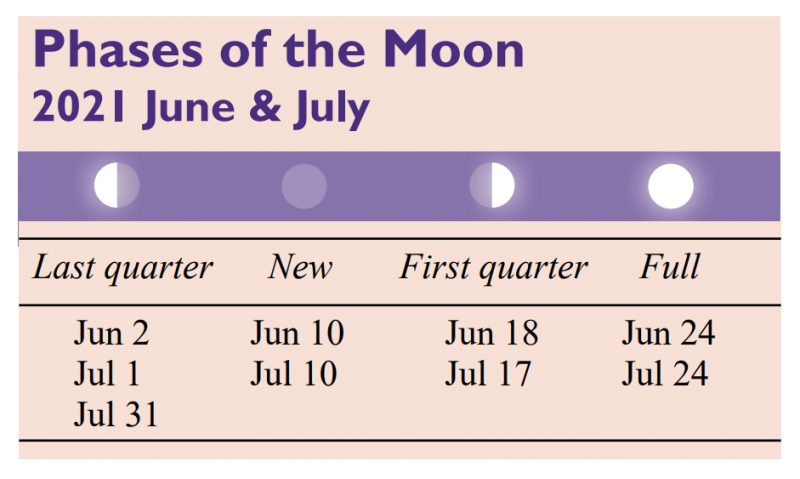 The June Boötids peak on Jun 27, although the bright waning gibbous Moon will detract from any enhanced activity like that which occurred in 1916 and 1998. The slow meteors derive from comet 7P/Pons–Winnecke.

The alpha Capricornids may be a better bet, as the Moon will be at last quarter on the night of their peak on Jul 30. The meteors, while infrequent, can be bright and a fireball may occasionally occur.

Finally, the southern delta Aquarids may put on a show, but the Moon rising in Pisces will interfere as it ascends with the shower’s radiant in Aquarius.

There are no bright comets predicted to be available in this period. However, southern observers may like to try for two periodic comets, 7P/Pons–Winnecke and 17P/Holmes.