Can it really be 25 years since Mark Armstrong became the first British amateur astronomer to discover an extragalactic supernova from the UK? For those of a certain age, I am afraid it is (Figures 1a & 1b). Mark’s achievement in spotting supernova 1996bo in NGC 673 on 1996 Oct 23 set off a magnificent era of British supernova discovery, with Mark, Tom Boles and Ron Arbour contributing an enormous total of individual discoveries.

NGC 673 itself is an undistinguished galaxy in Aries and the supernova is a rare claim to fame for the zodiacal constellation, which is not noted for its deep-sky riches. In fact, other than several mediocre galaxies, Aries boasts only one item of interest for most observers: the fine binary star gamma Arietis, or Mesarthim. Small telescopes easily resolve the equal pair of A-type stars, that both glow at magnitude 4.8. Although the orbit is paint-dryingly slow, with a period of around 5,000 years, it is a binary and the separation is slowly closing, with no change in the position angle of 0°. The separation is currently 7.6 arcseconds. Find it to the extreme west of the constellation, where it forms a shallow triangle with alpha (Hamal) and beta (Sheratan).

Aries lies between Pisces to the west and Taurus to the east. One of Ptolemy’s 48 constellations, it ranks 39th in overall size and from time to time hosts a planet. This year it is Uranus.

The autumn season’s guide to the constellations is Pegasus, who flies upside down across the meridian in mid-evening between early October and late November. The western stars of the Great Square of Pegasus are alpha (Markab) and beta (Scheat); these are similar in magnitude (2.4) but contrasting in colour. Markab is pure white, while Scheat is warm orange. Follow the line through these to the south, via the cascade from Aquarius’ water jar, and you will find the most southerly first-magnitude star visible from Britain: Fomalhaut, in Piscis Austrinus (the southern fish). The eastern stars of the Square are Algenib (gamma), the least bright of the four, and Alpheratz, which is the brightest, designated both alpha Andromedae and delta Pegasi. A plumb line south will just miss the more western of the fishes, here represented by the Circlet of Pisces (an asterism of 4th-magnitude stars), to reach a lonely yellow star in a barren region: beta Ceti (Diphda), which marks the tail of Cetus (the whale).

The full zodiacal constellation of Pisces is not rich in bright stars, the brightest only reaching 4th magnitude, but it has more of interest than its ovine neighbour. The westernmost of the two fish lies just below the Square of Pegasus, while the eastern nestles below Andromeda and just west of Aries. They are strung together on a line knotted at the extreme southeast of the constellation, infringing the waters occupied by Cetus. At the knot is the alpha star, Alrescha, which is both a binary and thought to be variable. Its separation was a straightforward 3.6 arcseconds when discovered by William Herschel in 1779, but has closed to its current 1.7 arcseconds. The stars are quite bright at 4.2 and 5.2; although both similar A-type stars, they have disparate colours recorded by past greats as ‘greenish white and blue’ (T. W. Webb) and ‘weird’ (K. McKready). But just splitting them should be reward enough in this epoch. Thought to be variable in the 19th century, there has been no overt change in a hundred years. An easier common-proper-motion pair with a fine colour contrast is zeta Piscium (Revati). A good double star for the owners of small telescopes, the pair are 23 arcseconds apart and subtly pretty, the primary (4.2) being yellowish, the companion (5.3) variously described as pale lilac, greyish, or rose – you choose. 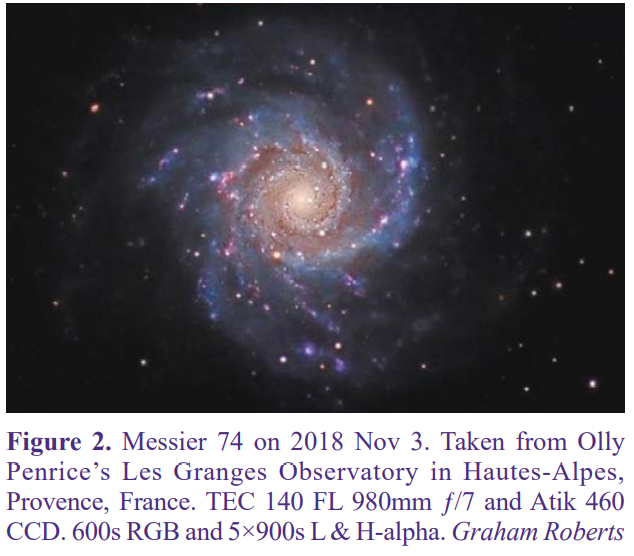 If you want to observe a white dwarf in isolation from a bright companion, try van Maanen’s star. It is magnitude 12.4 and close to the tail of the western fish (as typically portrayed). Being a mere 14 light-years distant, it whips along at 2.98 arcseconds per year. Adriaan van Maanen has a tarnished reputation, due to his dogged refusal to accept that his measures of stars in external galaxies were erroneous, but he was a fine astrometrist with regard to stars in our Milky Way galaxy. His star, now van Maanen 2, is one of the smallest stars known, being Earth-sized but with a mass comparable to the Sun. Another star of note is TX Piscium (19 Psc), a fine red carbon star once classified as a rare N-type, but now a C6-type. It lies in the east of the Circlet of Pisces and is around 5th magnitude. It can therefore be seen with the naked eye from a dark site, and easily in binoculars, but it is somewhat variable and may dip below 6th magnitude.

There are several galaxies of interest within Pisces, the best being the face-on galaxy Messier 74 (Figure 2). Near the tail fin of the eastern fish and just over a degree east of eta Piscium, Messier 74 has a reputation of being amongst the fainter Messier objects due to its low surface brightness. It is a ‘grand design’ spiral with two prominent arms and while faint visually, it is very lovely in images. It is around 32 million light-years distant.

Below the fishes swims Cetus. We encountered Diphda earlier, as Alpheratz and Algenib point towards this isolated yellow star, but the best action is at the other end of the leviathan where lies the wonderful long-period variable Mira, or omicron Ceti. It peaked at magnitude 2.1 during August of this year (p.XXX), amongst the brightest maxima known, and it should remain prominent through the autumn on its 332-day cycle. Find second-magnitude Menkar in the far east of Cetus 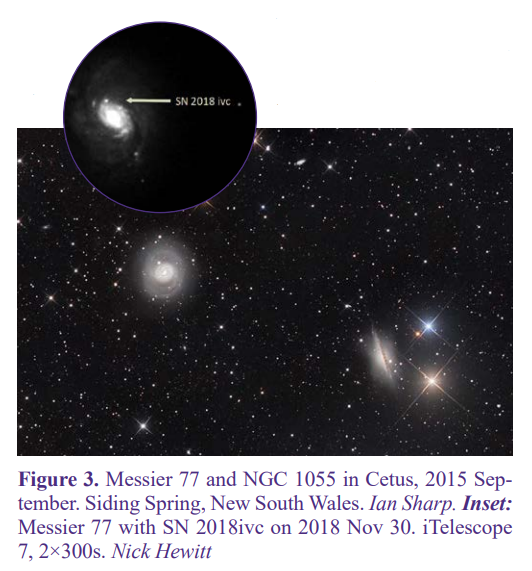 and follow through delta (magnitude 4) for the same distance to its west; the orange star will be Mira. Around delta lie several galaxies worth exploring, but the must-see is the barred-spiral Seyfert, Messier 77. This is a powerful active galaxy with an active nucleus (AGN), so is also designated Cetus A. The recent supernova 2018ivc was type II and was widely imaged (Figure 3a & b).

In the west, we still have the summer stars available in the early to mid-evening, even at the end of November. The Summer Triangle and Milky Way seem to take for ever to yield to the spectacular winter riches of Orion and retinue rising in the east, with Auriga and Taurus well up by mid-evening. In the north, Ursa Major is at its nadir, awaiting the spring release from hibernation.

Although there is a partial lunar eclipse on the night of Nov 19, with the full Moon in Taurus, only a hint of the penumbral stage will be visible in the pre-dawn sky. The Moon sets before anything of note occurs, but you may see a darkening of the northern limb if you have a flat western horizon. The full eclipse is seen from the USA.

There is also a total solar eclipse on 2021 Dec 4: a rather inaccessible one for most of us as the eclipse path crosses western Antarctica. It will be unusual as the path will move from east to west across the continent, most eclipse paths moving from west to east. If you happen to be there, enjoy the spectacle!

The Sun continues to become more active, although it is far from maximum.

Venus is brilliant but low after sunset. Eastern elongation will be on Oct 29, when Venus will be 47° from the Sun, but with a southerly declination of –26° it will make for unsatisfactory observations even if they are made in daylight. Through the period the diameter increases as the phase wanes, although the planet remains brilliant throughout.

Mars reaches solar conjunction on Oct 8 and then emerges into the morning sky in Libra in November, but low and tiny, so patience is required to get a more favourable look in 2022.

Jupiter has been well observed this summer by many amateurs and remains an early evening planet, reaching its greatest altitude of around 22° mid-evening in early October and at dusk by November’s end. Along with the disc features, we can look forward to a rare double transit of the shadows of Ganymede and Callisto on Oct 4. Later that month, Io and Callisto can be seen transiting before Jupiter sets on Oct 21 (Figure 4).

Saturn remains to the west of Jupiter and slightly lower; it is thus also best observed in the early evening when at its highest. The planet remains only 18° above the horizon though, so remains a victim of Earth’s atmosphere.

Both ice giants are favourably placed this autumn. Uranus is near omicron Arietis on Oct 13, before reaching opposition on Nov 4. Neptune, now past opposition, is tucked beneath the Circlet of Pisces.

The dwarf planet 1 Ceres is at opposition in Taurus on Nov 27. It passes remarkably close to Aldebaran on Nov 6 and retrogrades through the Hyades over the month. 2 Pallas is past opposition in Aquarius.

At the very end of November, Venus, Saturn and Jupiter will align low down in the southwest at dusk. 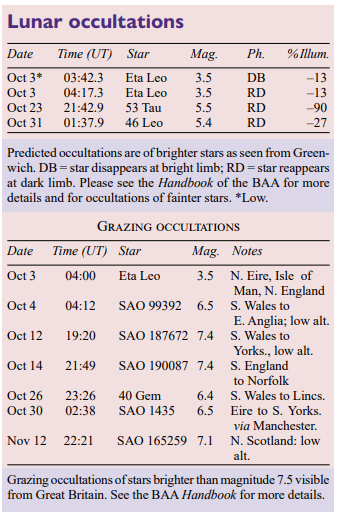 The Draconids may be worth watching on the evening of Oct 8 as the Moon will be absent; they may be seen in early to mid-evening. The shower derives from comet 21P/Giacobini–Zinner and is generally weak, but occasionally puts on a good display. The radiant is in the head of the dragon and high up in the northwest by mid-evening. 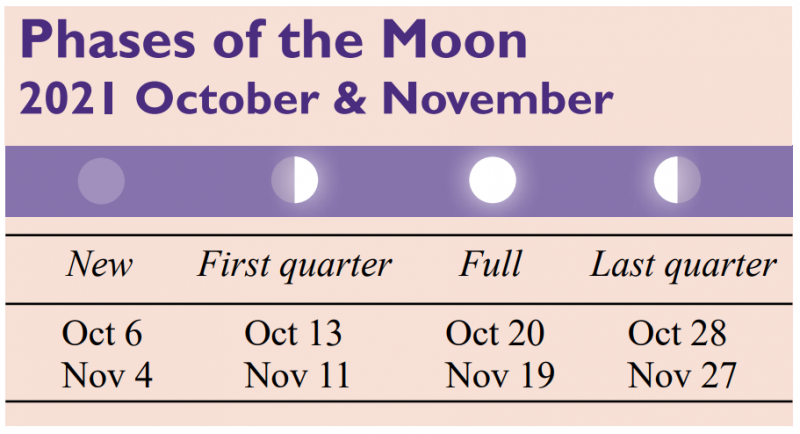 The Southern and Northern Taurids have a very favourable showing in 2021. The Southern Taurid maximum is on Nov 5 just after new Moon; the Northern Taurids peak at week later. Both of these showers have wide periods of activity between mid-September and early December, the Southern meteors being swift, often with persistent trains, and the Northern being slower. They are therefore easily distinguishable, although both radiant points are near the Hyades star cluster.

The Orionids will be compromised by the nearly full Moon when they are at maximum on Oct 22.

It is now 22 years since the famous Leonid display of 1999 November and we have to wait a further 11 years before the next potential storm of the Leonids, there being a 33-year cycle. This year is unlikely to be spectacular, with what meteors there will be swamped by the Moon which is full the following night. The shower peaks Nov 18 and is derived from comet 55P/Swift–Tuttle. 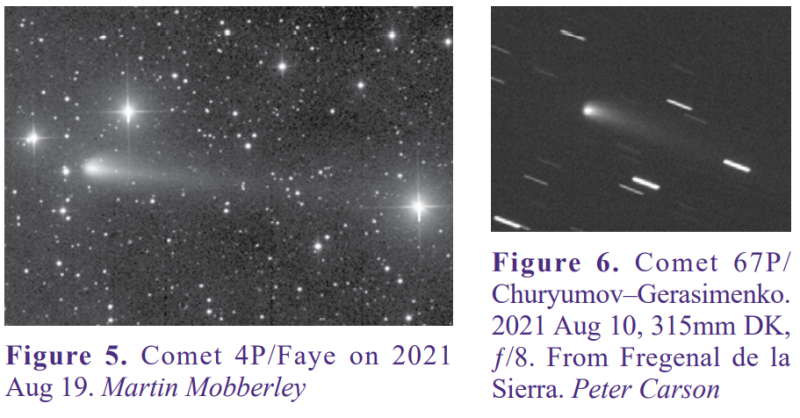 The periodic comet 4P/Faye (Figure 5) is past its perihelion (2021 Sep 8) so is unlikely to be bright, but is well placed in northern Orion, then southern Gemini and northern Monoceros during the autumn. See Nick James’ August ‘Comet of the month’ article on the BAA website for more details.

The famous 67P/Churyumov–Gerasimenko is also available and has been for a few months. It moves from Taurus in early October, passing north of the Crab Nebula on Oct 8, into Gemini where it is close to Messier 35 on Oct 17. In early November it passes south of Pollux in Gemini, ending the month in Cancer. It is unlikely to be bright but as it was the comet visited by Rosetta and its lander Philae in 2014, it is of special interest (Figure 6).