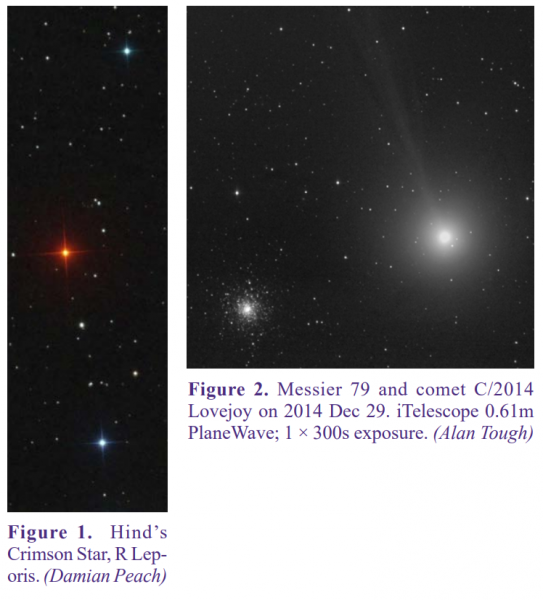 February begins with Orion astride the meridian at mid-evening and he is our invaluable seasonal guide. His belt stars are unmistakable and extrapolating a line south, we encounter the hunting hound Canis Major, with scintillating Sirius too obvious to miss. This larger dog is in pursuit of the somewhat overlooked hare, Lepus, nestling directly beneath Orion. There are so many marvels in the winter sky that Lepus does not always get much attention, but there are a few sights worthy of a detour.

Perhaps the best known of these is Hind’s Crimson Star, R Leporis (Figure 1). It is a carbon star and one of the ruddiest variables in the heavens, particularly when at minimum which occurs every 14.5 months. It should now be reasonably bright as it is around its maximum, at which time it is typically magnitude 7 but can be brighter as in autumn 2020. Find it by taking a line from delta Orionis (Mintaka) through Rigel; R Lep will be just short of this second distance.

In addition, no Messier survey can be complete without the globular cluster Messier 79 (Figure 2). It is low at –24 degrees declination, but it is small and bright, so not difficult if the horizon is not too cluttered. Alpha (Arneb) and beta (Nihal) Leporis point to it, and binoculars or a finder should locate it at magnitude 8.5. It is small in apparent diameter (8.7 arcminutes), as it is quite distant at 42,000 light-years. 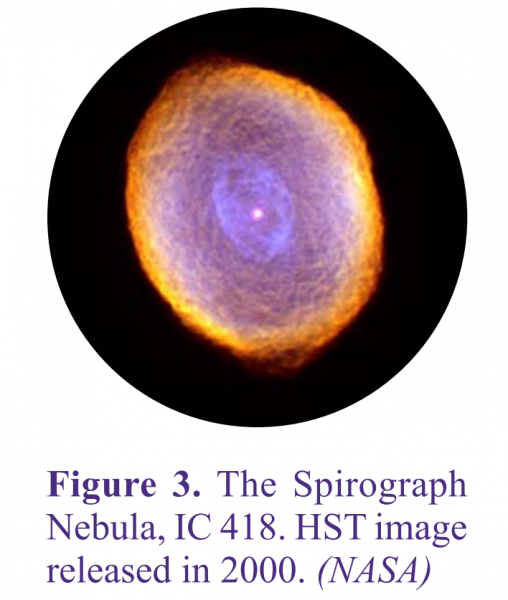 A little further north in the constellation is IC 418, a planetary nebula that requires moderate magnification. Known as the Spirograph Nebula, it is fairly bright at magnitude 9.6, but is a small oval of 11 arcseconds. The Hubble Space Telescope has revealed exquisite detail that is beyond the amateur (Figure 3).

Above the panting pooch sits Monoceros the unicorn, occupying the triangle formed by Betelgeuse and Procyon in the north and Sirius in the south. There are no bright stars in the fabled constellation, but there are deep-sky treats aplenty, especially for imagers; the Rosette Nebula, the Christmas Tree Cluster with its associated Cone Nebula, and Hubble’s Variable Nebula (NGC 2261), are all popular favourites.

To Orion’s north-east, Gemini is now at its most magnificent and is the most northern of the zodiacal constellations. One of the best open clusters in the sky is the easy binocular treat Messier 35, lying just north-west of the naked-eye pair representing Castor’s left foot: Tejat and Propus. Nestling between these two orange stars is one of the rare supernova remnants accessible by amateurs – IC 443, the Jellyfish Nebula. It is the remains of a supernova that occurred in the distant past, although in the literature there is a wide range of estimates for the time of the explosion. Currently, around 30,000 years ago is favourite (Figure 4). 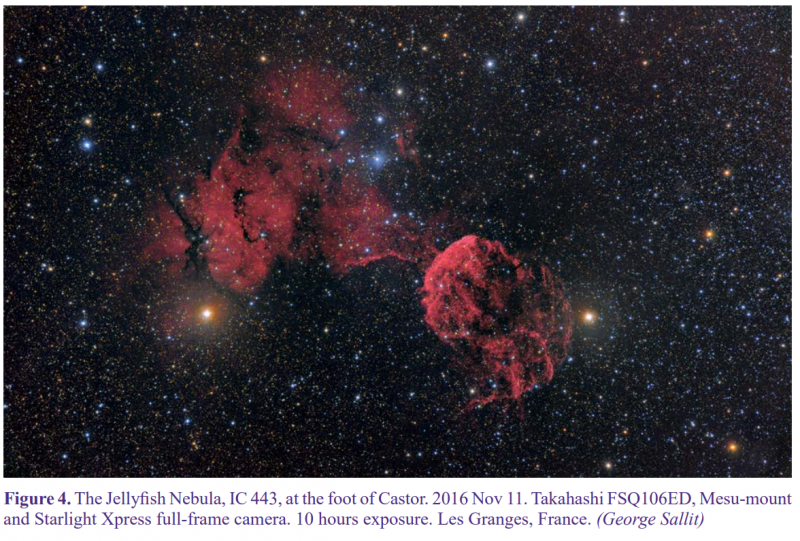 Following the zodiac east is Cancer, the crab. Nestled between Gemini and Leo, and considerably less ostentatious than the flashy twins, Cancer still boasts two superb and contrasting clusters, and a most extraordinary object: the twin black hole OJ 287. The clusters are the famous Praesepe, also known as the Beehive (Messier 44), and Messier 67, an ancient open cluster. Praesepe is large and relatively close at 610 light-years distant, containing around 200 stars spanning 1.2 degrees, so rich-field telescopes or large binoculars give the best 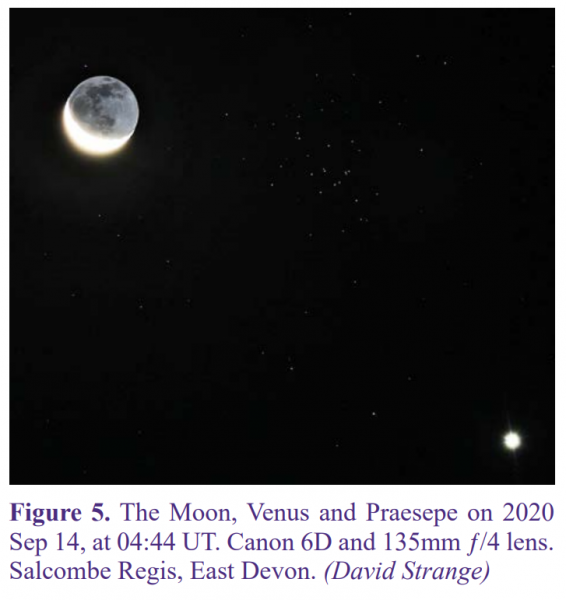 views. From a dark site it is an easy naked-eye cluster. (Figure 5).

While Praesepe is a mature cluster at 600 million years old, Messier 67, around eight degrees to its south-east, is a geriatric. Less than half the size and three magnitudes fainter than Praesepe, it is nevertheless rich and rewarding. One of the oldest open clusters known, it may be 3.5 billion years old and its stars are well evolved, with unusually high numbers of red giants and white dwarfs. It owes its longevity both to its richness and its position well away from the galactic plane, reducing gravitational disruption. (See the BAA Journal, 130(1), p.60.)

Not too far from Praesepe lies OJ 287, a favourite amongst the observers of active galactic nuclei and one of the best-studied by professionals. The current model suggests a supermassive black hole of some 18 billion solar masses, in a dance with a smaller black hole of a mere 100 million solar masses. Surrounding the larger black hole is an accretion disc estimated to be 100 light-weeks in diameter, through which the ‘tiddler’ plunges during its 12-year orbit. The pair are at a distance of 3.5 billion light-years, so are possibly the furthest objects that most amateurs can image (Figure 6). 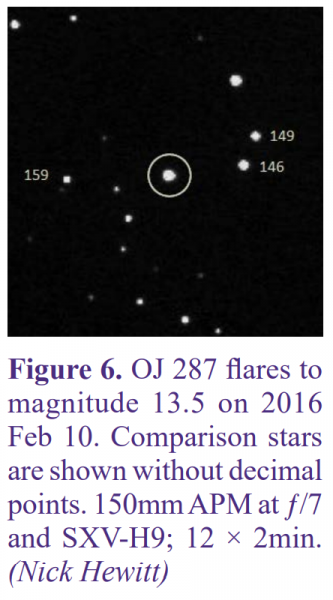 South of Cancer is the head of Hydra, the sinuous serpent that will eventually take us from winter into spring. Slithering east, Hydra passes under Sextans, then Crater, curling underneath Corvus and Virgo to terminate beneath Libra. Despite its extreme length, there are few treasures on show, the best fare being the fine open cluster Messier 48 near Hydra’s head, the colourful planetary nebula NGC 3242 (the Ghost of Jupiter) to the west of Crater, the globular cluster Messier 68 south of Corvus and the fine southerly galaxy Messier 83, which lies almost 20 degrees south of Spica.

North of Cancer is also bare scrubland, where hides the elusive Lynx. This rare feline is represented by a string of faint stars running from third-magnitude alpha Lyncis north-west towards northern Auriga. It splits Ursa Major from the charioteer. The best deep-sky object within is the ‘Intergalactic Tramp’, NGC 2419, a very distant globular. (See the BAA Journal, 130(1), p.61.)

Another underwhelming and hence overlooked constellation is the little lion, Leo Minor. Added to the list of star patterns by Hevelius in 1687, it is not clear of what he was thinking. Perhaps he wished to add a buffer between enormous Ursa Major to the north and splendid Leo to the south, but surely extending Leo’s mane would have made more sense. Possibly because of this invention, Leo Minor has no alpha star, although 46 Leo Minoris, or Praecipua, is brighter than beta at magnitude 3.8. The IAU agreed to this inclusion a century ago, in 1922, so we have to live with it. Many faint galaxies abound, and there is one exotic phenomenon: Hanny’s Voorwerp. Hanny’s object was discovered using the Galaxy Zoo citizen-science project in 2007 by teacher Hanny van Arkel and is a quasar ionisation echo. Ionisation of extended gas from an active galaxy is not unknown, but none had been found by amateurs before. A green splodge near the spiral galaxy IC 2497, it is perhaps one of the most peculiar objects in the heavens (Figure 7).

Leo itself is a superb constellation, packed full of accessible galaxies and heralding the galaxy feast on offer from February through to May. By late March, Virgo is well up in the east, with the bowl-shaped ‘Realm of the Nebulae’ brimming with galaxies that spill into Leo to the west, Coma and Canes Venatici to the north and Ursa Major overhead. 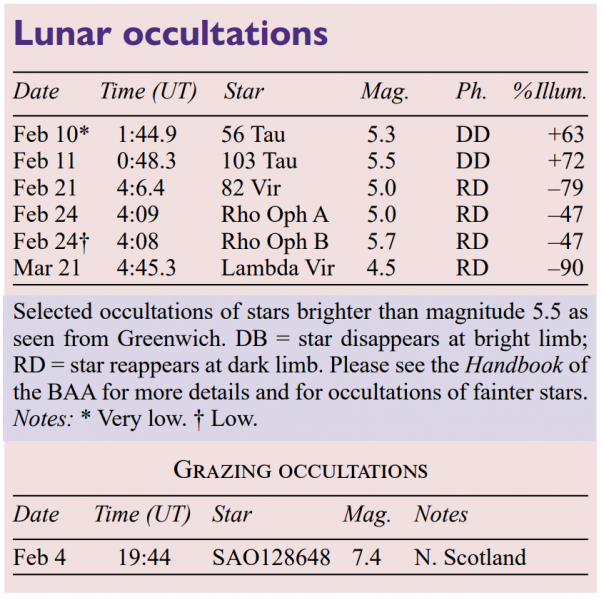 There are no solar or lunar eclipses in 2022 February or March. The vernal equinox on Mar 20 is followed by British Summer Time beginning on Mar 27. The Sun has shown signs of activity through the autumn, so it is anticipated that this will increase. As the days draw out, opportunities for observation improve.

Turning to the planets, this is a season for optimistic early birds rather than evening owls, as most of the planets are either showing poorly in the morning or are completely invisible.

Mercury has a morning showing with greatest western elongation on Feb 16, but it is extremely low and thereafter difficult. Superior conjunction occurs on Apr 2.

Venus also is a dawn beacon, a brilliant-albeit-low ‘morning star’ in northern Sagittarius reaching western elongation on Mar 20 when just 10 degrees above the horizon. As the phase increases, the apparent diameter decreases, but the magnitude remains around –4.5.

Mars joins the early morning throng and lies below Venus, but is much fainter (+1.3) and so an unrewarding target for now.

Jupiter is visible in the early evenings of February, but very low in twilight. It is in conjunction with the Sun on Mar 5. 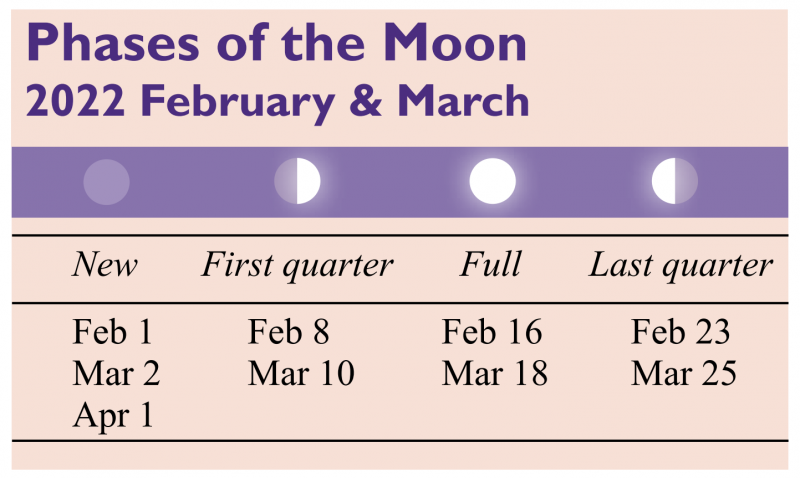 Saturn reaches conjunction on Feb 4 and is slow to emerge into the morning sky. Venus, Mars and Saturn gather in a very tight group in the predawn sky at the end of March and early April, but will be much better placed from more southerly latitudes.

Uranus remains well placed in Aries during February but thereafter becomes more difficult. Neptune slips into the evening gloaming early in February, before conjunction on Mar 13.

Of the asteroids and dwarf planets, (1) Ceres remains in Taurus, between the Hyades and Pleiades. (2) Pallas and (3) Juno are both in Aquarius but lost in the evening glow.

There are no bright comets anticipated at the time of writing, but there are fainter ones available and favourably placed.

C/2019 L3 (ATLAS) is in Gemini although not very bright. It is at perihelion on Jan 9 and likely to be fading by February, with a predicted magnitude of around 13. C/2017 K2 (PanSTARRS) will be at a reasonable altitude in Aquila on March mornings, but still faint.

The best comet during this period is likely to be 19P/Borrelly, as it sweeps east from Pisces to Perseus through February and March during the convenient mid-evening. It reaches perihelion on Feb 1 so may be the brightest available comet, possibly achieving 9th magnitude although the predicted magnitude is fainter. 29P/Schwassmann–Wachmann remains high in Taurus. It is likely to be faint, although it has been rather exciting with its flare-ups through autumn 2021.

The Delta Leonids have a maximum on Feb 25. Derived from 55P/Tempel–Tuttle, this is not a rich shower, but the Moon should not interfere this year. The Pi Virginids, also weak, will be free of the Moon in early March.