One hundred years ago, on 1920 Apr 26, a meeting of the National Academy of Sciences took place in Washington DC. Two astronomers presented papers that evening on a theme of ‘The distance scale of the universe’. Although it was not a formal debate, they held very different views on the subject. Harlow Shapley, the first to speak, felt we lived in the suburbs of an enormous galaxy, the Milky Way, and that the ‘spiral nebulae’ existed within it. Countering this view was Heber Doust Curtis, who maintained that the true Milky Way Galaxy was very much smaller than Shapley’s and that the spiral nebulae were ‘island universes’ at great distance from our system.

The meeting was not regarded as a true debate at the time, but it would later be known as ‘The Great Debate’. Generating two substantial papers in the Bulletin of the National Research Council in May the following year, it was the catalyst for great strides in our understanding of the Universe. Both speakers were correct on many points, but Curtis was more so – the ‘island universes’ are very independent systems at increasingly mind-boggling distances from us.

Spring is the time to enjoy the ‘Realm of the Nebulae’, as Edwin Hubble described the great swathe of galaxies that constitute our local supercluster. When we observe the multitude of galaxies in the Bowl of Virgo and surrounding constellations, we can sense the immensity of the local Universe and get a feel for its three-dimensional nature. Although the major players in the Great Debate were Local Group galaxies, which are mainly autumnal targets (especially the Great Andromeda Galaxy, M31 and Triangulum Galaxy, M33), many more of those closely studied around the time of the Great Debate are available through spring and summer, particularly Messier 51 & 101 (Canes Venatici) and Messier 81 (Ursa Major).

As we have essentially lost Orion as a signpost, we turn to our other great seven-star asterism as our guide to the season: the Plough (or Saucepan) within Ursa Major. The Great Bear wheels above us, at the zenith by late April. The pointers, alpha (Dubhe) and beta (Merak), aim usefully to the north celestial pole flagged by Polaris, but also southward to Leo.

Regulus (alpha Leonis) is past the meridian but is still high and well-placed, preceding the famous Leo Triplet (Messier 65 & 66, plus NGC 3628) and less-observed leonine galaxies forming the M96 Group (or Leo 1 Group). This includes Messier 96 itself, Messier 95 nearby, and the elliptical M105 in a subdued trio with NGC 3384 and NGC 3389. These groups are part of the Virgo Supercluster and lie on a chord between Regulus to the west and Denebola to the east. They are about halfway to the rich centre of the supercluster, being between 33 and 36 million light-years from us.

To the east of the meridian, the bear’s most exaggerated tail sweeps through to Arcturus (alpha Boötis) and on to Spica (alpha Virginis). The area demarcated to the west of this curve and to the east of Denebola (beta Leonis) and Porrima (gamma Virginis) is a galaxy hunter’s dream: Hubble’s ‘Realm of the Nebulae’. Stuffed full of every type of galaxy, the area can be confusing to navigate, but there are challenges for all telescopic observers here.

Porrima itself is of great interest (Figure 1). A visual binary with a rapid orbit, it has two equal components at 38 light-years distant from us. The combined magnitude is +2.7, each being an F-type star of magnitude +3.5. Their period of 169 years is short enough for the change in separation and position angle to be observed visually over the years. They were closest in 2005, when a mere 0.4 arcseconds apart, and are now much easier at just under three arcseconds.

Under the tail of the bear, yapping at his rear, are the hunting dogs Canes Venatici. Cor Caroli (alpha Canes Venatici) is a fine binary star of magnitude +2.8 for small telescopes, with a primary and secondary separated by a generous 19.6 arcseconds. South of the dogs we flow into Coma Berenices (Berenices’ hair) and although Coma contains no brilliant stars, it is dominated by a large open cluster best enjoyed by binocular users: Melotte 111. The cluster is not rich – with only 40 stars – but spans seven degrees, as it is relatively close at 280 light-years. 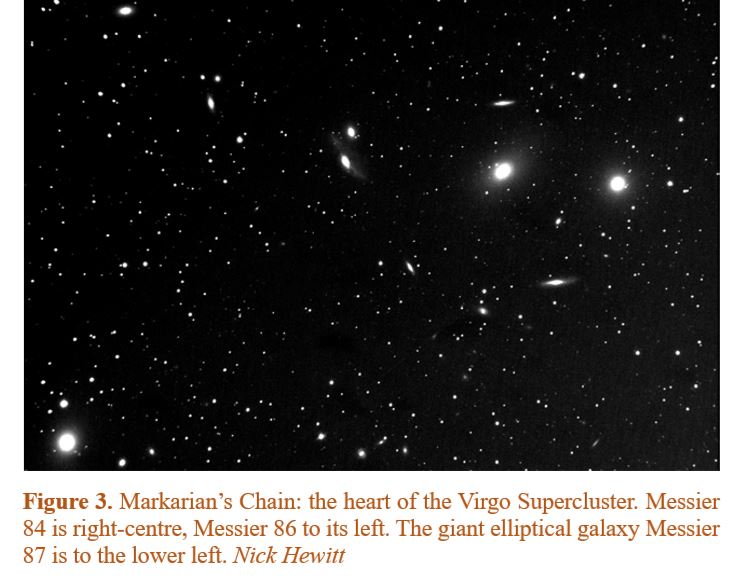 Further south still, we arrive at the glories of the Virgo Cluster. The richest component of our local supercluster is dominated by three huge elliptical galaxies, Messier 87 (of recently imaged black hole fame), and the pair Messier 84 & 86. Here we are looking towards the centre of the supercluster. A string of galaxies curve east from Messier 84, and this ‘Markarian’s Chain’ (Figure 3) is perhaps the best place to set out on an observing quest in the core of the Virgo Cluster.

South of Virgo lies Corvus (the crow or raven). While not brilliant and quite low in the south, it has a distinctive shape and is easy to identify. It acts as a guide to the famous Sombrero (Messier 104); a lenticular galaxy in southern Virgo. Taking a line from epsilon through delta Corvi and with Spica to the east, you should find a tiny arrow of 7th and 8th magnitude stars that aim at the Sombrero (Figure 4). 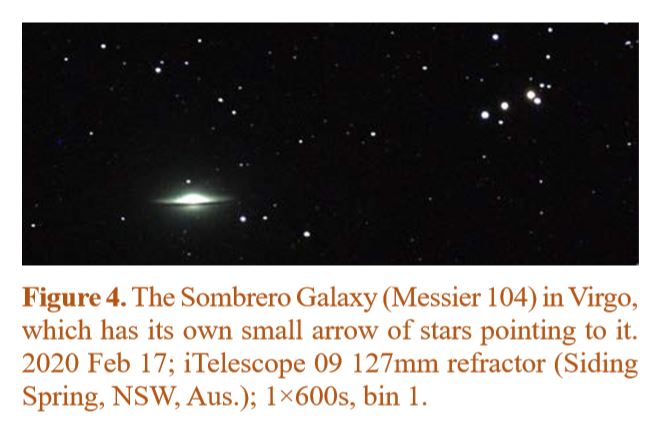 In Corvus itself we find one of the most dramatic sights in the heavens, the interacting pair of galaxies known as the Antennae. NGC 4038 & 4039 (Figure 5) are low, but worth the chase. Follow delta through gamma Corvi and locate this celestial firework display – the collision of gas and dust within the pair of colliding spirals has generated a huge burst of star formation. 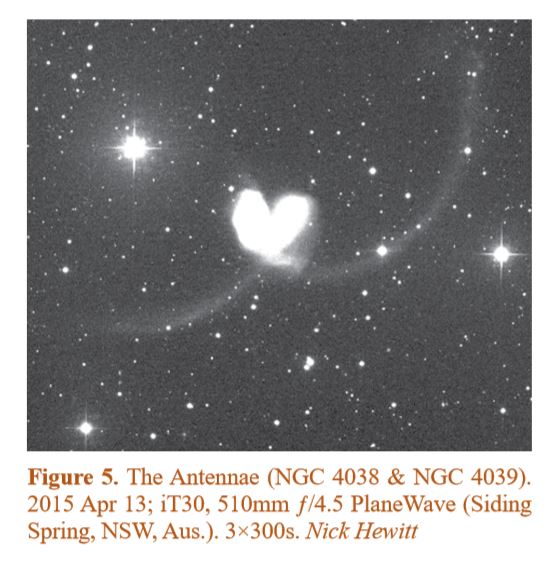 As the brilliant yellow star Capella in Auriga (the charioteer) steers the winter constellations into the west, arriving in the east is Vega, the marginally more radiant blue jewel of the lyre dragging the summer stars into view. Capella and Vega are the third and second brightest stars of the northern hemisphere respectively, and their paths as they swing around the pole indicate the shift of the seasons.

To the north Draco is well placed, with the lozenge-shaped head lying just 10° or so north of Vega. Etamin (gamma Draconis) is brightest at magnitude +2.2 and Rastaban (beta Draconis) completes the dragon’s eyes. Its body coils confusingly between Ursa Minor and Hercules, who comes to prominence in the east. Draco is full of interesting galaxies (see ‘A visual treat in the dragon’s den’) and the famous Cat’s Eye planetary nebula, NGC 6543.

Now past the equinox, the Sun rises earlier and sets later every day. Whether this increased availability will correspond with sunspot activity is still uncertain. There are no solar or lunar eclipses during this period. 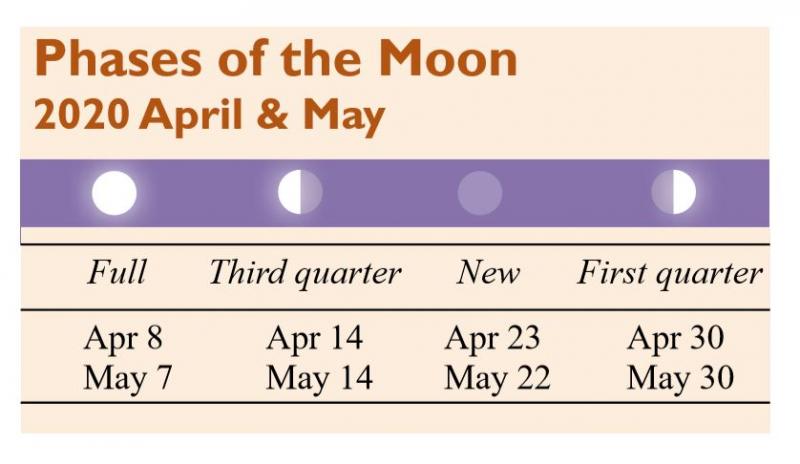 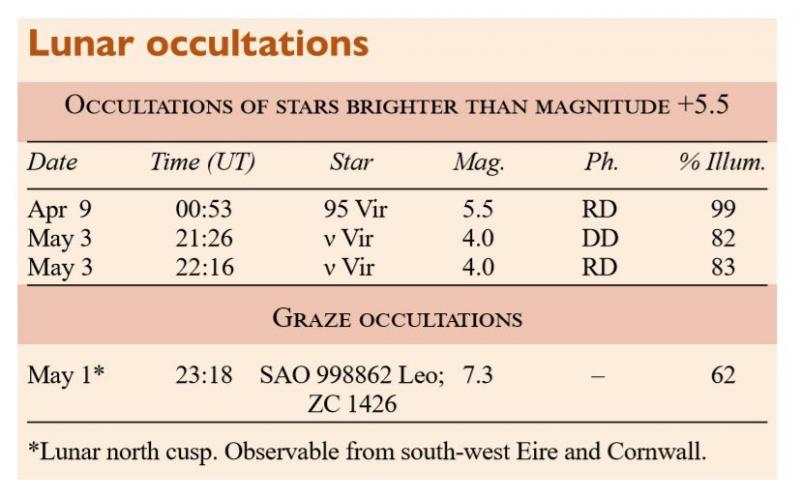 Mercury is poorly placed throughout this period for UK observers. After his western elongation on Mar 24, he remains very low in the morning sky and is heading for superior conjunction on May 4.

Mercury’s reappearance in the evening sky will again be poor. He sweeps just a degree below Venus between May 20 & 22, but is very low after sunset. Very cautious daytime observing may give a better view. Comparison of the dinky gibbous disc (6.5arcsec) with the large thin crescent of Venus (53arcsec) will be of interest. 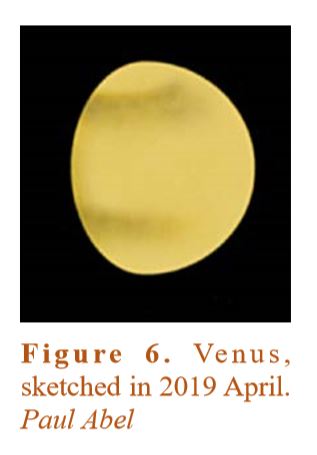 Venus remains a ravishing beauty in the evening sky, but begins to fall back towards the Sun with inferior conjunction on Jun 3. A rapid increase in apparent diameter from 25.5arcsec on Apr 1 to 57.4arcsec on May 31 is associated with a more marked crescent phase. The Moon is nearby on Apr 26 and a comparison of crescents can be made, the Moon’s 12% sliver being thinner than that of Venus at 28%.

Mars is low in the morning sky, not making much progress towards a better position. His apparent diameter is improving, even if the altitude from the UK is not. At the beginning of April he shows a 6.4arcsec disc, growing to 9.2arcsec by the end of May.

Jupiter gradually begins to be more accessible in eastern Sagittarius, but still only achieves some 17° of altitude in the south at dawn. Opposition is on Jul 14, but his altitude is no better then. Things can only get better in future years.

Saturn is still poorly placed in western Capricorn, east of Jupiter and with an opposition just a week after the latter on Jul 20. For UK observers, this is not a good year for the gas giants.

From the end of March and through the first week of April, Jupiter, Saturn and Mars are in a rare and close conjunction before dawn, desperately low from the UK (only around 11° in altitude from London). Anyone further south will have a lovely view of these fascinating worlds. Southern hemisphere observers are very lucky, as all these three outer planets are very high in the morning sky.

Turning to the ice giants, Uranus is in conjunction with the Sun on Apr 26 and Neptune is now emerging low in the morning sky in Aquarius.

3 Juno is the only well-placed asteroid for small telescopes, lying in the Bowl of Virgo west of Delta Virginis at magnitude +10.

The Eta Aquarids are the best meteor shower of the period. Maximum is on May 6, but the shower can be active from Apr 19 through to the end of May. These meteors are debris from the comet 1P/Halley and they are the spring equivalent of the autumnal Orionids. The shower is best seen an hour before morning twilight, although the almost full Moon may interfere this year.

Although a weaker shower, the April Lyrids may be better placed as the radiant (now in Hercules) is high in the midnight sky and the Moon is new on the night of maximum, Apr 22. Although the Lyrids have a typical zenithal hourly rate (ZHR) of 15, the shower can occasionally surge to a ZHR of 100, so it is worth watching. 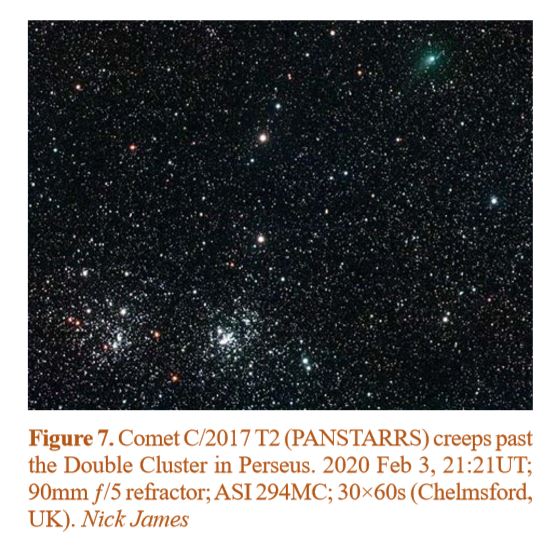 The best comet of the period in question remains C/2017 T2 (PANSTARRS). Moving from eastern Cassiopeia into north-west Camelopardalis in early April, C/2017 T2 continues to be circumpolar from the UK and crosses the northern aspect of the giraffe and into Ursa Major in mid-May. Perihelion is on May 6 (although it was closest to Earth on its inward path on Dec 29).

On May 22, the comet passes less than a degree from Messier 81, the grand spiral in Ursa Major; the Moon is absent. On May 28 it has its outbound pass, 1.659au from Earth. Its predicted magnitude is, as with all comets, uncertain. However, it could remain a good binocular or photographic target.