The night sky is now dominated by the Summer Triangle formed by the three brilliant stars Vega, Deneb and Altair. These are our seasonal guide, with the Plough well down in the north-west and Orion resting until before dawn. In the south-west, Hercules and Ophiuchus remain well placed for exploration, but we lose Antares and northern Scorpius. This is the last chance to enjoy the more southerly sights in Sagittarius (Figure 1) as the Milky Way runs from south-west to north-east through the zenith, culminating in Cepheus and Cassiopeia. 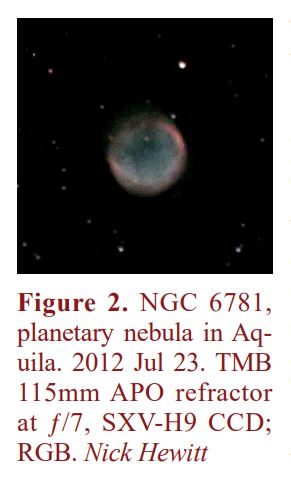 There is so much to enjoy in the warm evenings of late summer. Lyra is small and not over-rich but has the Ring Nebula, epsilon Lyrae (the ‘double double star’) and globular cluster Messier 56 as popular highlights. Cygnus is stuffed full of wonderful things, the Veil Nebula (NGC 6960 and NGCs 6992–5), the Crescent (NGC 6888) and Albireo being the most popular visual targets, and the North America Nebula for imagers. Aquila is heavily populated with clusters, dark nebulae and several small planetary nebulae. It does also boast one stand-out larger planetary too: NGC 6781, a fine disc of uneven light (Figure 2).

But now is a good time to explore some of the sky’s smallest constellations. If spring has many of the largest (Hydra, Virgo, Ursa Major and Hercules), 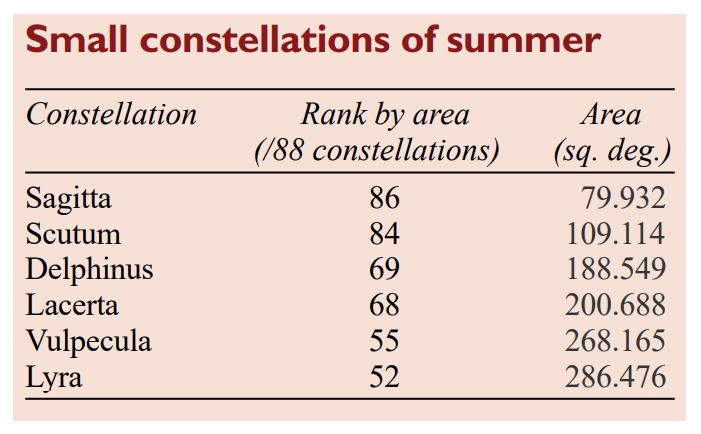 summer has many tiddlers.

The most distinctive of these are Sagitta and Delphinus. Run a line between Deneb (alpha Cygni) to Altair (alpha Aquilae) and you will sweep through Sagitta, the arrow. The main interest in this minute quarrel is the atypical globular cluster, Messier 71. Its nature was debated until quite recently (see p.248). The eclipsing binary U Sagittae is a good introduction to binocular variable star observing, as it dips from magnitude +6.5 to +9.3 every 3.4 days.

Delphinus, the dolphin, is to the east of the Summer Triangle and does resemble a leaping aquatic mammal. Lozenge-shaped with a tail, the four stars are sometimes known as ‘Job’s Coffin’. The alpha and beta stars form the dorsal aspect and their unusual names Sualocin and Rotanev are relatively modern, being applied by Giuseppe Piazzi in the early 19th century to honour his long-term assistant and successor at the Palermo Observatory in Sicily, Niccolò Cacciatore. The Latin translation of his name is Nicolaus Venator (Nick the Hunter) and Piazzi reversed the letters. A fine if quirky tribute! 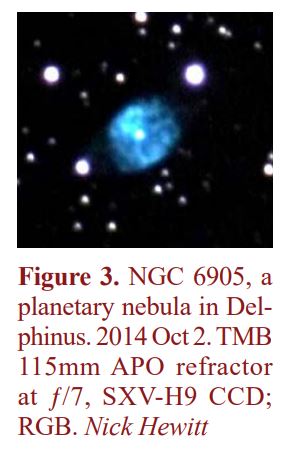 Gamma, the dolphin’s snout, is a lovely double star for small telescopes, with an orange primary of magnitude +4.5 and pale yellow secondary of +5.5, just nine arcseconds apart. A beautiful planetary nebula, NGC 6905, lies between the dolphin and fox. Nicknamed the Blue Flash, it is striking in colour images. It nestles in a triangle of stars of similar brightness and is around mag. 11, but has a reasonable surface brightness within the 48×35 arcsecond disc (Figure 3).

Vulpecula, the fox, has lost his goose these days – a Hevelius invention, ‘Vulpecula cum Anser’ was too much of a mouthful for astronomers (and for the Fox) so we just have the canine. Famed for the Dumbbell nebula, he is represented in a wide stocky constellation lying between two inedible birds, Cygnus the swan and Aquila the eagle. Despite being immersed in the Milky Way, he has no bright stars and is best found by locating the wonderfully colourful Albireo (beta Cygni) at the lower end of the ‘Northern Cross’ asterism within Cygnus. Alpha Vulpeculae is just to the south-west, at only magnitude +4.4. It forms a wide optical double with 5th magnitude 8 Vul. Follow the constellation east, north of Delphinus and beneath the swan’s southern wing. 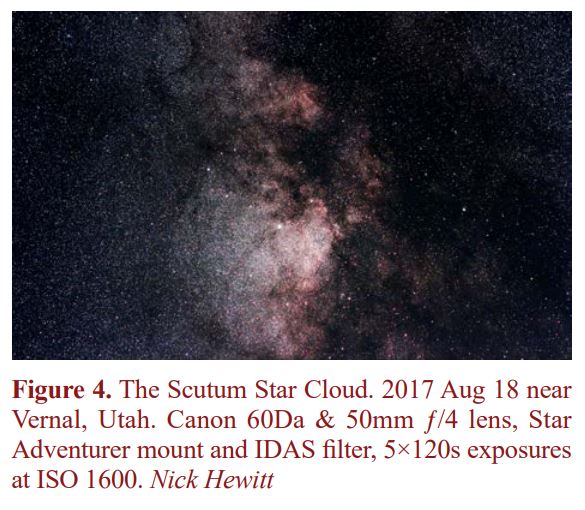 Scutum is dominated by the Scutum Star Cloud (Figure 4), south-west of Altair. It is one of the Milky Way’s brightest segments and a treat for binocular observers from a dark location. The nearby dark nebulae can also contrast well with the brilliant suns within. The northern aspect of the Cloud has a prominent circlet of stars, comprising lambda and 12 Aquilae then eta, R and beta Scuti. R Scuti is a pulsating RV Tauri variable and another good beginner’s target.

The gem of this unofficial tiara is Messier 11. Nicknamed the Wild Duck cluster by Admiral William Smyth, this is one of the richest and most spectacular open clusters in the heavens. It also boasts one of the largest numbers of stars, with some 1,000 known and probably 3,000 existing. It is technically naked-eye at magnitude +5.8, but difficult with the bright Milky Way surrounding it (Figure 5).

South of Messier 11 and rather overlooked by comparison is Messier 26 (Figure 6). It is not a gem, but worth chasing. 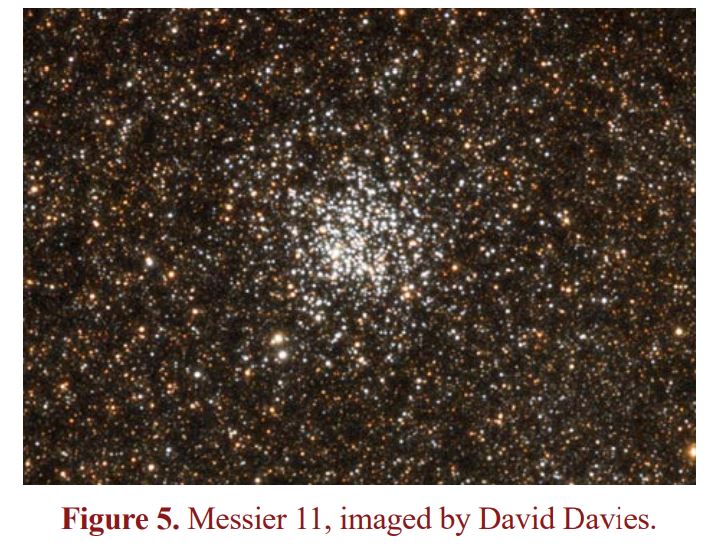 Finally we have a wee lizard, Lacerta. Despite its position on the eastern edge of the Milky Way, it contains remarkably little of interest. There are a few neat doubles and a couple of average open clusters for the enthusiast. It does contain the prototype blazar, BL Lacertae, one of the brighter active galactic nuclei. If you find it, you are seeing an object 900 million light years away. 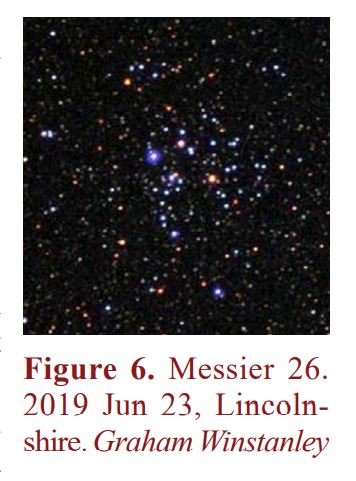 As we lose the early summer stars into the west, hints of autumn rise in the east. Pegasus is prominent, with poor chained Andromeda behind him. Aquarius rises in the south-east with Capricornus caught between him and the Gas Giants in eastern Sagittarius.

Approaching the zenith from the north-east is ill-defined Cepheus, being pursued by his dominant queen, Cassiopeia. This regal couple will be prominent for the rest of the year.

The Sun reaches autumn equinox on Sep 22 at 13:31 UT. He may be waking up a bit, as some recent activity points to this. During June the first 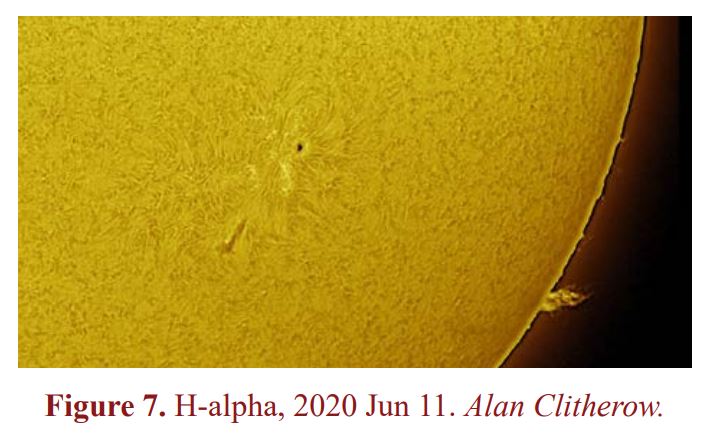 substantial sunspot of the new cycle was observed in AR2765 (Figure 7). At its best it consisted of a small penumbral sunspot and some minor followers, lasting from Jun 2–15 to complete a transit of the solar disc although it was fading as it approached the western limb. Hopefully more activity will follow.

There are no eclipses during this period. 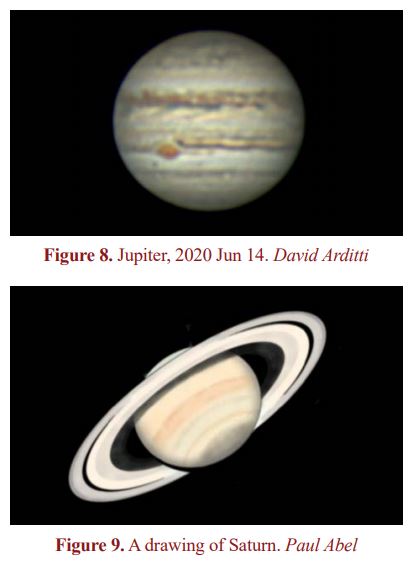 Jupiter (Figure 8) is a brilliant magnitude –2.7 in Sagittarius and cannot be missed. Opposition was on Jul 14 and his diameter remains a generous 47 arcseconds in early August, shrinking slightly to 44 arcseconds by late September. If his low altitude makes discerning fine detail difficult, the main belts should be visible and the dance of the Galilean moons enchanting, even for the smallest telescope.

Saturn (Figure 9) follows Jupiter to his east, a less spectacular magnitude +0.1 in early August, dropping slightly to +0.4 by October. What he lacks in naked-eye brightness is amply compensated for by the view through a telescope. The rings remain wide open, if slightly less so than in 2019, and if seeing allows look for the Cassini Division. The Saturnian system of moons can be enjoyed too, Titan being generally easy in small telescopes at magnitude +9. The other satellites range between magnitude +10 and +12, so may prove trickier.

Mars (Figure 10), now in Pisces, rises in the east at midnight in early August, and is high in the south-east by the end of September. He begins to

retrograde in early September, brightening from –1.0 to –2.4 between August and early October: a spectacular orange ember to rival Jupiter. Martian dust storms willing, we should now enjoy some splendid views of his surface as the disc swells from 15 to 22.3 arcseconds. The planet will be nearest to Earth on Oct 6, reaching a very favourable perihelic opposition on Oct 13. Visit the BAA website for Richard McKim’s tutorial about drawing Mars, and for 2020 Mars Section images.

The south polar cap is tilted in our direction, but may well have diminished considerably by September. Rima Australis widens as the Martian summer progresses in the southern hemisphere. Watch for cloud formations, especially the appearance of dust although such events are more likely to be extensive after opposition, as the southern aspect warms.

This apparition is the most favourable for years from the UK, with a good-sized disc on display at a reasonable altitude. Mars will be very close to the waning gibbous Moon on Sep 6.

She reverses her stages of the first half of 2020 by diminishing in size, but largely retaining her brilliance, dimming only slightly from –4.4 to –4.1. Western elongation on Aug 13 shows a 22 arcsecond disc and half phase. 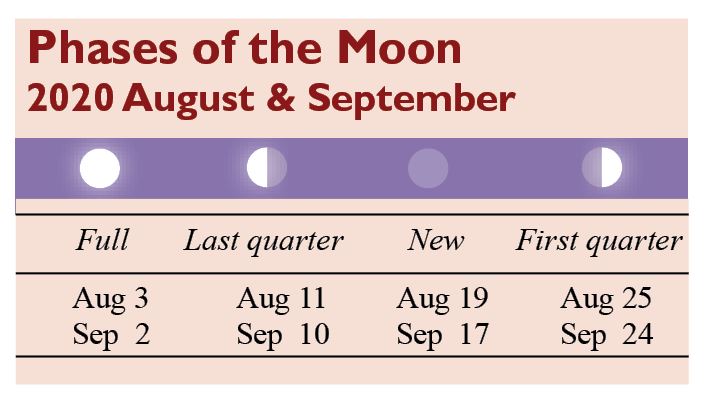 Mercury is at superior conjunction on Aug 17 and is an evening planet, reaching eastern elongation on Oct 1 when 26 degrees from the Sun, but even in daytime will be low down. A poor two months for the Winged Messenger.

Uranus is near the front legs of the Ram (Aries) in the east. Although just 3.6 arcseconds in diameter and magnitude +5.7, he is increasingly imaged by amateurs and more detail can be shown than by Voyager 2 in 1986! The moons too can be captured.

Neptune reaches opposition on Sep 11, well placed in eastern Aquarius. At nearly 29au from Earth, he only 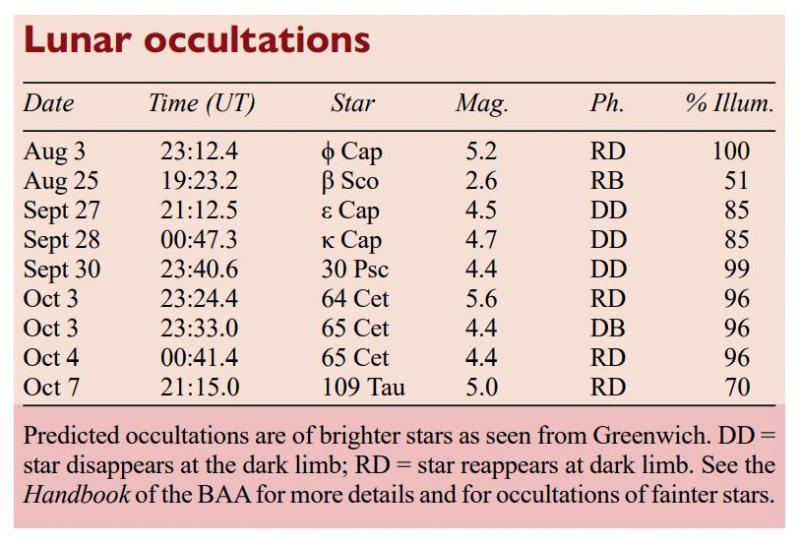 subtends an angle of 2.36 arcseconds, but he too can be imaged by advanced amateurs these days.

2 Pallas is well positioned in south-east Hercules and is at magnitude +9.9.

It is possible that comet C/2020 F3 (NEOWISE) will put on a show, but at the time of writing it is far from clear whether it will survive perihelion on Jul 3, when the distance from the Sun will be less than 0.3au. If it does make it, it can be found low in the west in the evening in early August. 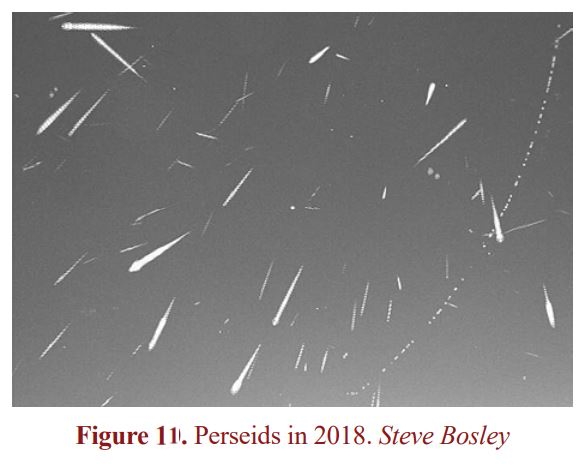 The year’s most popular meteor display, the Perseids, will peak on the night of Aug 12/13. The radiant, to the north-east of gamma Persei, reaches a good altitude by midnight; the best of the shower is normally after this time but the waning crescent Moon rises just before and will compromise the event. Nevertheless, good activity can often be enjoyed from around 21.30 BST. It is always fun to meteor-watch with friends during the warmer summer nights.

Kappa Cygnids (Figure 11) are a more meagre shower peaking around Aug 17 and its meteors may be confused with sporadics while on a Perseid watch.