Life is full of compromises and for astronomers in spring, we have warmer but shorter nights. British Summer Time began at the end of March and thus observing sessions are starting later, becoming very late by the end of May. This is not a major issue for observers of the planets, as there are few on show in the evening this spring. Early risers can see the procession of major planets before dawn, albeit low down and so generally unsatisfactory.

As the brilliant winter stars dip into the west, the Milky Way sinks from view, opening a dust-free window to the universe beyond. The April skies can be transparent, and we find the glut of galaxies in the Virgo Supercluster moving west, to be replaced by some of the heavens’ finest globular star clusters by May. The ‘Realm of the Galaxies’ in the Bowl of Virgo and beyond are well placed for observation, the centre of our Virgo Cluster of galaxies being a treasure trove for the deep-sky enthusiast.

Markarian’s Chain is a good place to begin, just 10° north of the celestial equator, between Denebola (beta Leonis) and Vindemiatrix (epsilon Virginis). The two great elliptical galaxies Messiers 84 and 86 are easy targets, visible in finderscopes. These giants and their spiral neighbours are at the centre of the Virgo Cluster of over one thousand assorted galaxies, but as they are between 54 and 65 million light-years in distance, large telescopes are required to tease out detail. Other galaxy groups, also part of the Virgo Supercluster family, are nearer and often more rewarding. Many are prominent in spring around and below Ursa Major.

The Great Bear now wheels overhead and is our guide to other constellations. Below the ‘saucepan’ asterism of the Plough pattern lies Leo, with a line through Megrez to Phad/Phecda pointing to the constellation’s brightest star Regulus, and one from Dubhe through Merak pointing to the lion’s rump. Beneath the curve of the bear’s tail yap the hunting dogs (Canes Venatici), with the easy second-magnitude double star Cor Caroli. The dogs trample the hair of Berenices (Coma Berenices) that lies above Virgo. Extrapolating the tail south brings us to Arcturus in Boötes and then on to Spica, Virgo’s brightest gem. 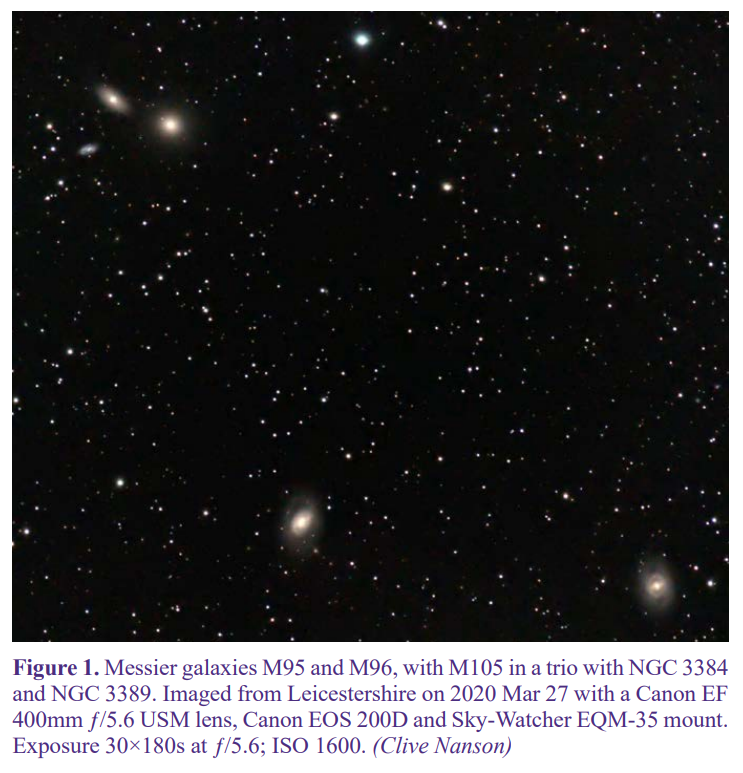 Within this large swathe of sky are the many galaxy groups that contribute to the Virgo Supercluster. The Leo I group is well placed in April and contains some of the best galaxies of spring, including Messier 105, nearby Messiers 95 and 96 in the west of Leo, the Leo Triplet of Messier 65, 66 and NGC 3628, and numerous other NGC galaxies of assorted classes. The group is quite spread out, as they are relatively close neighbours of our Local Group, at a ‘mere’ 25–35 million light-years (Mly) distance. They lie under the lion, between Regulus to the west and Denebola to the east. The bluish spiral NGC 3389, near M105, looks to be associated with Leo I, but this is a line-of-sight effect and it is twice as distant.

As the night draws on, the two galaxy groups in Canes Venatici become more prominent. Canes I is sometimes known as the ‘Messier 94 Group’, due to the prominence of its brightest member: a 9th magnitude SA(r)ab spiral that is the apex of a triangle between alpha (Cor Caroli) and beta (Chara) Canum Venaticorum. The group has an unusually large number of irregular galaxies, although many are faint. Other members include NGC 4244, a fine edge-on silver streak, and NGC 4449, an irregular mess. The majority of this group are in the 10–16Mly range.

The Canes II Group is further from us but is also rich in targets for amateurs. The largest and best known of this group is Messier 106, an easy target at magnitude 9.1 and lying between Chara and Phecda (gamma Ursa Majoris). Other enjoyable galaxies abound at a rough distance of 25Mly, including the interactive pair NGC 4485 and NGC 4490.

A third group, scattered between Canes Venatici and Coma Berenices to the south, is usually known as the NGC 4631 Group, after the bright distinctive Whale galaxy. Another characterful galaxy within this group is NGC 4656 (the Hockey Stick): a distorted barred spiral warped by an encounter with NGC 4631. At 30 million light-years from us, these are halfway to the Virgo Cluster’s centre. Feast on the majestic star-cities during Moon-free April and May nights.

Just north of the celestial equator, in Virgo itself, lies the famous quasar 3C273. Its nature was suggested 59 years ago by Maarten Schmidt and Bev Oke using the 200-inch reflector on Mount Palomar. Some older readers may remember a magical sequence during a BBC programme in 1968 called The Violent Universe where Schmidt observed quasars from the cage of this historic telescope while listening to Beethoven’s Pastoral Symphony. The excerpt can be found at bbc.in/3udFqAu. Of course, at 2.44 billion light-years, it is not part of the Virgo Cluster or even the local supercluster. But at a magnitude of around 12.9 (it varies), it can be seen visually with modest-aperture telescopes. If the sight does not impress, the statistics will. 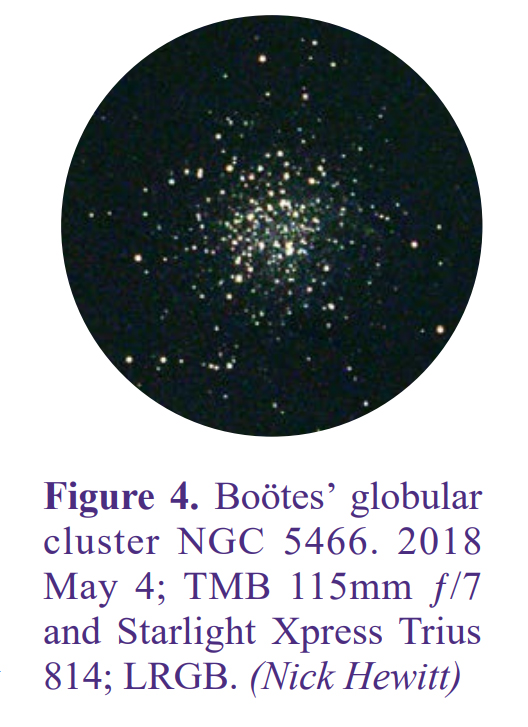 If galaxies are not to your taste, perhaps enjoy two contrasting globular clusters at the end of the tresses of Coma Berenices, on the border with Boötes. Messier 53 is bright (magnitude 7.7), compact (13 arcminutes across), and lies close to fainter and slightly smaller NGC 5053: a much looser affair. Both can be captured in a low-power field (Figure 4). Messier 53 is quite distant at 60,000 light-years but fairly typical, being class V. Less than a degree away, NGC 5053 is at a similar distance but is class X1: very poorly concentrated and of low metallicity. One theory is that it has been torn from the Sagittarius Dwarf Spheroidal Galaxy in the past.

To the east of the meridian, kite-shaped Boötes is prominent, its brilliant orange luminary Arcturus (the brightest star in the northern hemisphere) being unmissable at magnitude –0.05. Most deep-sky objects in Boötes are faint galaxies and are generally unrewarding, except for the truly dedicated. In compensation, there are several double stars to enjoy, particularly tight Izar (epsilon Boötis, or Pulcherrima). A binary with a period of over 1,000 years, the separation is under three arcseconds (ʺ), but the orange and blue colours are gorgeous. Other doubles to chase on a Moon-compromised night include mu (a triple, with the primary 108ʺ from a pair at 2.3ʺ), pi (a 5th-magnitude white pair at 5.6ʺ separation), and chi (an unusually coloured pair being yellow and orange, 6.6ʺ apart).

Northwest of Arcturus is an overlooked globular, NGC 5466. Due east of the brighter and better-known Messier 3, this is a 9th magnitude cluster of the loosest kind, being class X11. It has been nicknamed the ‘Snow Globe’ (Figure 5).

The occultation of gamma Virginis (Porrima) by the Moon on May 13 offers an opportunity for the non-specialist to enjoy. Porrima is a close binary, but it has recently widened (now 3.1ʺ) to be accessible to modest telescopes. Although at 01:56 BST, it will be worth seeing the star disappear behind the dark limb of the Moon and re-emerge less than an hour later. The binary comprises very nearly equal components of magnitude 3.4 and 3.5, with a position angle of 355°. 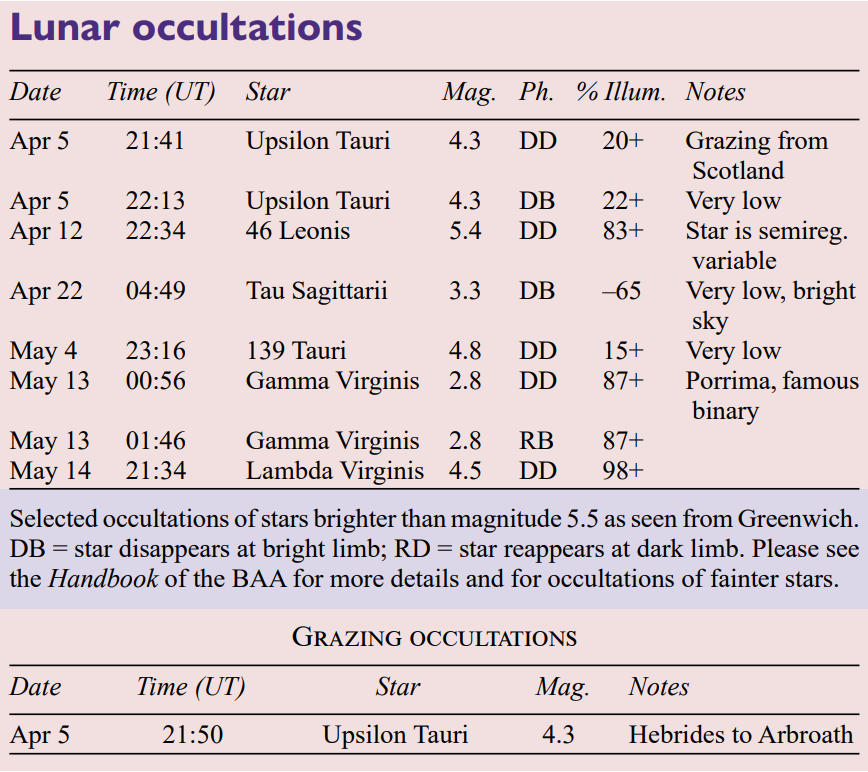 The Sun is now at last showing more activity, with several large sunspot groups being imaged in the winter. With the advent of longer days and the Sun occupying a higher position, this could be an excellent time for observation. The noctilucent cloud season begins in May, so look out for these spectacular blue-tinged clouds in the north during astronomical twilight. 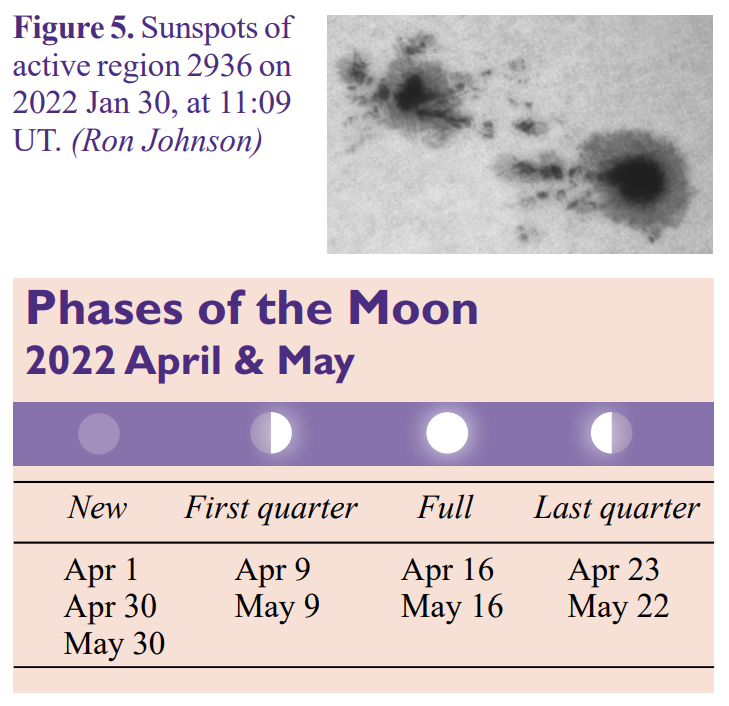 There is a partial solar eclipse visible from South America on Apr 30, but nothing will be seen from the UK. The total lunar eclipse that occurs on May 16 is frustrating for UK observers, because totality begins at 04:30 BST – a few minutes before the Moon sets.

Getting up early is necessary to catch a host of planets, although other than Mercury none are putting on a good show just yet. For the enthusiast, there are several close encounters of the planetary kind to look out for. In early April, Mars and Saturn are very close, especially on Apr 5 as they scrape the horizon west of brilliant Venus. Venus then has a very close encounter with Jupiter on Apr 30, when they are just 0.2° apart, although low in an increasingly bright sky. Jupiter itself lies very close to Mars at the end of May.

Mercury puts on its best evening show of the year following superior conjunction on Apr 2, reaching eastern elongation on Apr 29 when 12° above the horizon. It flies under the Pleiades at the end of April, but they may prove difficult in a bright spring glow.

Venus reached western elongation on Mar 20 and is as brilliant as ever, despite the disc shrinking as it pulls away from Earth. However, its low altitude during spring will make detailed observation difficult.

Mars begins infuriatingly low as it passes from Capricornus to Aquarius in early April, although it improves in altitude as it moves into Pisces by the end of May. The disc swells from 5.2 to 6.2 arcseconds, becoming a better target for imagers.

Jupiter rises just before dawn in April and remains difficult throughout this spring. Saturn is the first planet up in the morning, following conjunction in early February. The rings are closing somewhat, with more southern hemisphere on show than for a few years. It is still several weeks from opposition however and it sits low in eastern Capricornus. Wait for high summer.

Uranus is at conjunction with the Sun on May 5. Neptune creeps into the morning sky but is essentially unavailable.

19P/Borrelly is predicted to fade in the evening sky as it becomes more distant. It is just south of the Pleiades in mid-April.

C/2017 K2 (PanSTARRS) should be visible in the morning skies using large binoculars or small telescopes, moving slowly in April and May in western Aquila, but then accelerating southwest through Ophiuchus in June and July.

C/2019 L3 (ATLAS) is in Gemini and is well placed, close to Alhena (gamma Geminorum) early in April.

Newly discovered C/2021 O3 (PanSTARRS) moves into the northern sky in early May, ascending rapidly from Perseus and then clambering up the neck of the giraffe, Camelopardalis, becoming circumpolar during the short nights of late May. It will be at some 0.6au when closest to Earth on May 9, but how it will perform is anyone’s guess.

The April Lyrids will be at their maximum on Apr 22, with the last-quarter Moon rising well after midnight. It is not normally a rich shower but rates can occasionally soar, so it is worth looking. The radiant is now in Hercules rather than Lyra, but near enough to Vega (alpha Lyrae) to make no difference. The Eta Aquarids peak on May 6 when the Moon is a waxing crescent and so will not interfere, the shower’s radiant rising well after midnight. These meteors are debris from comet 1P/Halley and are the spring equivalent of the autumnal Orionids, which originate from the same famous visitor.