At last, we have planets to observe at a reasonable hour for those averse to early rising. As the days shorten, a procession of favourite solar-system quarry becomes available – firstly Saturn, then Jupiter, with Mars becoming more prominent towards the equinox on Sep 23. During the warm late-summer nights, the Milky Way offers an array of treats for the deep-sky observer, so all tastes are catered for.

The Summer Triangle is made up of three first-magnitude stars: Vega, Deneb, and Altair. Vega (alpha Lyrae) is a brilliant blue-white treasure that begins August almost at the zenith. Lyra is a small but perfectly formed pattern that contains the famous Ring Nebula (Messier 57), the rather overlooked globular cluster Messier 56, and the ‘Double Double’, epsilon Lyrae. This is a wide pair of stars, within which each component is again a closer double and a good test for small telescopes. The wide pair is easily split using binoculars, as the two binaries are 208 arcseconds apart. Epsilon-1 (ε1) has stars of magnitude 4.7 and 6.2, separated by 2.6 arcseconds; epsilon-2 (ε2) has stars of magnitude 5.1 and 5.5, slightly closer at 2.3 arcseconds. 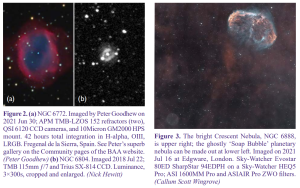 South of Vega and to the east is Altair, the brightest member of Aquila the eagle and, at magnitude 0.75, the 12th brightest star in the sky. This white A-type star is relatively close at 16.6 light-years from us. It is in quite a spin, rotating at 286km/s and so flattened at the poles. Much faster and Altair would break up! The eagle lies deep in the summer Milky Way and is paradise for enthusiasts of planetary nebulae, particularly the small challenging ones that adorn the constellation like out-of-season Christmas tree lights. The best known is NGC 6781 and is a decent size at 110 arcseconds, but many of the others are much smaller, ranging from NGC 6741 and 6803 (both six arcseconds) to NGC 6772 (62 arcseconds) and therefore more difficult to image. Some fainter planetaries from the Abell catalogue (there are 10, with Abell 70 being one of the easier ones) are being increasingly imaged in modern times.

Between NGC 6781 and the bright pair of open clusters NGC 6755 (bright, large) and NGC 6756 (smaller, fainter) lies an extraordinary object: SS433 or V1343 Aquilae, a microquasar. This exotic system is within the Milky Way galaxy at around 18,000 light-years distant, and consists of a stellar-mass black hole in an eclipsing orbit with a late A-type star. It varies between 13th and 17th magnitude over a 13.082-day period. The associated gaseous supernova remnant Westerhout 50 (the Manatee Nebula to some) is being distorted by this powerful residual black hole and companion, the system having been formed some 20,000 years ago.

If small planetary nebulae are not to your taste, Cygnus offers a splendid collection for devotees of larger diffuse nebulae, all of which are ripe for imaging. The lead star of the swan is Deneb, the third of the Summer Triangle stars. It takes Vega’s place near the zenith at the beginning of September and remains prominent until Christmas. The 19th brightest star, it is a true supergiant searchlight, at an extraordinary distance of 2,616 light-years, giving a magnitude of 1.25. Nestled next to Deneb is the huge North America Nebula (NGC 7000), and its fainter companion nebula, the Pelican (IC 5070). Visible to low-power optics from a very dark sky, the North America Nebula is a dramatic subject for imagers, small refractors being particularly effective. Narrowband filters bring out a wealth of detail, emphasising the dark obscuring clouds adjacent to the bright emission.

The swan has an asterism within: the Northern Cross. Much larger than its southern counterpart, it is nevertheless very distinctive and at its base lies a favourite double star with the most beautiful colour contrast: Albireo or beta Cygni. Between Deneb and Albireo is Sadr (gamma Cygni), an F-type star of magnitude 2.2 that centres on a region that is a mass of glowing hydrogen and dust. One of the brightest parts is the Crescent Nebula (NGC 6888). This is the product of mass loss from a Wolf–Rayet star: an extremely hot evolved massive supergiant. Like many of us trying to live longer, it is shedding mass to avoid ending its days as a supernova. The star responsible for the emission is magnitude 7.5, with a most beautiful visual spectrum. The nebula is a crescent unless imaged deeply, measuring 18×13 arcminutes.

Very close to the Crescent is a relatively new discovery, the Soap Bubble Nebula (PNG 75.5+1.7) – not to be confused with the Bubble Nebula (NGC 7653) in Cassiopeia. This very faint, large planetary nebula was only discovered in 2008 by amateur Dave Jurasevich, demonstrating that even in the seemingly unchanging heavens, discoveries can still be made. In fact, there is a very exciting pro-am project looking for faint planetary nebulae, and discoveries are becoming plentiful, but perhaps not for the average amateur under less-than-optimal skies. (See planetarynebulae.net, where observer Peter Goodhew sends many images.)

Another favourite is the Cygnus Loop. This supernova remnant is second in prominence only to the Crab Nebula in Taurus. It lies just south-east of epsilon Cygni, the most easterly star in the Northern Cross asterism. It is made up of different components and these can give rise to many other nicknames, including the Veil or Bridal Veil, the Network, and the Filamentary Nebulae. But they all formed together in a Type II supernova explosion some 15,000 years ago. The brightest segment comprises NGCs 6992–5 (the Veil), but the western part (NGC 6960) can be the easiest to locate as 4th-magnitude 52 Cygni lies in the foreground, a beacon guiding the observer into the area.

A slow sweep north-east with a low-power eyepiece and oxygen filter should bring other gossamer threads into view – even the most elusive part, the northern component known as Pickering’s Triangular Wisp. Another fine target, in the extreme east of Cygnus on the Lacerta border, is the Cocoon Nebula (IC 5146): a stunning mix of emission, reflection, and dark nebulosity. The bright nebula is trailed by the dark nebula Barnard 168, the contrast being dramatic.

The famous variable star chi Cygni is always worth monitoring. Extrapolating a line from Deneb through Sadr and continuing halfway from Sadr to Albireo leads to this Mira-type variable. An asymptotic giant branch star, it is cool and luminous with a wide amplitude of magnitude from 3.3 to 14.2, the largest of any pulsating variable. More typically the maximum is around 4.8 and minimum 13.4. The period is around 408 days. This year it will be in decline by September from a maximum just below 4th magnitude in April, but small telescopes should show it before minimum in December.

The smaller summer constellations of Vulpecula, Sagitta and Delphinus lie below Cygnus, east of Aquila, sufficiently within the Milky Way to have numerous objects of interest (see 2020 August Journal, 130(4), p.252). Just north of the celestial equator and between the splendid globulars Messier 15 and Messier 2 lies a small horse’s head. (The Godfather springs to mind.) Equuleus, the Little Horse, is the second smallest constellation and is ancient, thought to be added by Hipparchus. With nothing of interest within it, one has to ask ‘Why?’

To the west, the rich Milky Way constellations of Sagittarius, Scutum, Serpens Cauda and Ophiuchus are dipping into the south-west, but as the days draw in, they can be accessed for a few weeks longer.

By September the flying horse, Pegasus, is becoming prominent and contains AG Pegasi, the BAA’s 2022 variable star of the year. It is the slowest symbiotic nova on record, handily placed 3° north of Enif in the westernmost part of the constellation. See the 2022 Handbook of the BAA for full details of the history, light curve and chart of this fascinating stellar system. 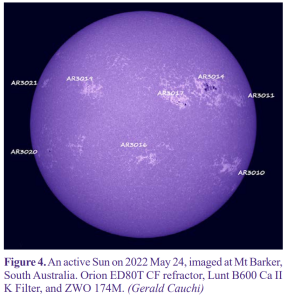 The autumnal equinox is on Sep 23; the days will be shorter than the nights thereafter. But the Sun is still well positioned for observation and should remain suitably active. There has been some very enjoyable sunspot activity in the late spring and early summer. There are no eclipses of the Sun or Moon during this period.

Mercury is a difficult evening planet, and while reaching a greatest eastern elongation of 27° on Aug 27 it is desperately low. Opportunities for imaging are realistically during daytime, with great care needed. Inferior conjunction occurs on Sep 23.

Venus remains brilliant but low in the east-northeast before dawn, shrinking from 10.5 to 9.8 arcseconds as it heads for superior conjunction on Oct 22.

Mars becomes much more prominent, beginning August around magnitude 0.1 and 8.6 arcseconds in Aries. By early September, the Red Planet moves east into Taurus, rather north of Aldebaran. By the end of the month, it has brightened to –0.5 and is 11.7 arcseconds; it achieves a good altitude at midnight. The gibbous phase becomes less noticeable. Southern summer (and hence northern winter) began on Jul 21. Do follow this apparition on the Mars Section blog at: bit.ly/3RHvASk.

Jupiter reaches opposition on Sep 26 at a spectacular magnitude –2.9, in a subdued star field in Pisces. The gas giant also reaches an impressive equatorial diameter of 49.9 arcseconds, so much detail should be on offer. Transit phenomena of the Galileans are always interesting and on the night before opposition, Io transits mid-evening and occults its own shadow. 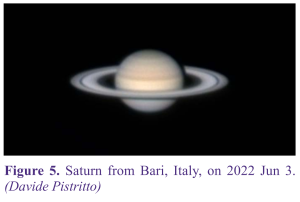 Saturn arrives at opposition well before Jupiter on Aug 14 (not as stated in the Handbook), at magnitude –0.3. The ringed planet is slowly climbing the ecliptic, reaching eastern Capricornus and an altitude of 22°. Although only magnitude +0.3, in this rather barren part of the sky it should stand out well. On the days either side of opposition, the rings appear noticeably brighter: the Seeliger effect.

Uranus lies 1.4° north of Mars in early August, but the two planets soon part. The ice giant will be occulted by a waning gibbous Moon on the evening of Sep 14. The tiny disc will appear from behind the dark limb, but its earlier disappearance beneath the brilliant limb will be difficult to observe.

Neptune in eastern Aquarius beats Jupiter to opposition by 10 days on Sep 16. 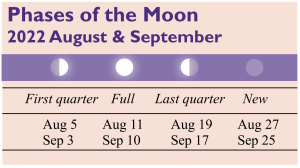 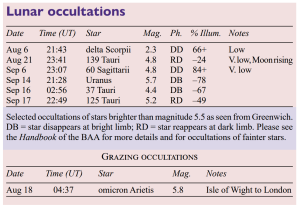 The Perseids peak on Aug 12, but this reliable and popular shower will be severely compromised by the full Moon this year.

The kappa Cygnids are much less rich and will also be affected by the Moon on Aug 14.

Alpha Aurigids are at their maximum around Aug 31 and the Moon will not interfere. A weak shower as a rule, occasional outbursts have been recorded. The meteors derive from comet C/1911 N1 (Kiess).

This is a barren period for bright comets, with C/2017 K2 (PanSTARRS) moving from Ophiuchus into Libra in early August and disappearing south by the end of the month.