The year ends with Mars having its best apparition for the next few years. While not achieving its greatest possible apparent diameter this time round, it is at least high in Taurus, minimising the effects of our atmosphere. The Red Planet has been well imaged already this autumn, and around opposition on Dec 8 it should be the focus of attention for all lovers of the planets. It will remain very bright and a decent size (for Mars) well into the New Year.

Brilliant Mars may prove a distraction from the stellar treats of winter but of course Orion, our signpost in the cold season, will be high and helpful throughout Christmas and the New Year. High in the south-east on the day of the solstice on Dec 21, the great hunter will reach the meridian at mid-evening in mid-January. From Orion, it is easy to locate Aldebaran in Taurus to his north-west and Sirius in Canis Major to his south-east, with Castor and Pollux in Gemini and Capella in Auriga to his north, almost gracing the zenith at Christmas.

This splash of winter jewellery guides us into a treasure trove of deep-sky trinkets, at the expense of some of the sparser areas of the winter sky, such as Camelopardalis. For such a large animal, the celestial giraffe is inconspicuous, having no bright stars, but it sits in a prominent position in the north with its rump sitting on Perseus and head lying near the pole.

One of the best asterisms in the constellation is Kemble’s Cascade: a line of faintish stars covering a distance of around three degrees, so a treat using large binoculars (see image at top). The stars are colourful too, adding to the beauty for imagers. Named by the legendary American amateur astronomer Walter Scott Houston, in honour of his friend Lucian Kemble who described it to him, it tips into the bright open cluster NGC 1502. Locating Kemble’s Cascade can be tricky (or fun, depending on your point of view), as there are no bright stars nearby to guide you and the high elevation can give neck pain. The easiest way is to start at Elnath (beta Tauri or gamma Aurigae) and sweep past Capella for a similar distance. You should then see the lines of 8th- to 10th-magnitude stars either side of a 5th-magnitude white B-type star. NGC 1502 itself (see Figure 1) is a compact seven arcminutes in diameter, so may be the most obvious component of the Cascade.

Just over a degree north from NGC 1502 lies NGC 1501, a very enjoyable planetary nebula. It is nicknamed the Oyster Nebula – perhaps for the 14th-magnitude central ‘pearl’ – and despite an off-putting magnitude of 13, it is quite an easy bluish disc and a respectable 50 arcseconds across; it is not dissimilar to Jupiter in apparent size.

By the turn of the year, it is obvious that the Great Bear is on the move. Ursa Major turns into the north-eastern sky and Camelopardalis swings with it. Two other targets are easier to locate by using the ursine signpost, and both are in northern circumpolar positions. Firstly, the fine galaxy NGC 2403, thought to be part of the Messier 81 group and around nine million light-years from us. Its proximity makes it appear large, at 22×12 arcminutes. The huge H ii region NGC 2404 is approaching 1,000 light-years in diameter, and the similarity of the galaxy and its H ii region to Local Group galaxy Messier 33 is striking. It is located between the heads of the Great Bear and Lynx, and some have glimpsed it with large binoculars. From Phad (gamma Ursae Majoris) through Dubhe (alpha Ursae Majoris) and past Messiers 81 and 82, deviate the same distance slightly to the south to locate the galaxy in a rather amorphic zone. 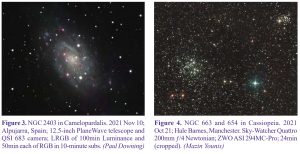 Then there is the cataclysmic variable star Z Camelopardalis: a dwarf nova that has a range between 9th and 14th magnitude. Z Cam is a popular variable and the prototype star of a subclass of dwarf-nova-type cataclysmic variables. These Z Cam stars are characterised by their random standstills in amplitude, differentiating them from the rather similar SS Cygni dwarf novae. The plateaux occur between the maximum and minimum range – in Z Cam’s case, around magnitude 11.7. The maximum is around 9.6, the minimum 13. The standstills occur as the star fades from maximum and may last days or even over a year, so as a circumpolar object it is always worth monitoring.

If the giraffe proves frustratingly elusive due to the dearth of bright guides, revert back to Cassiopeia for some browsing opportunities within the Milky Way. Our celestial queen remains high in the north-west and the Milky Way runs through her. She is studded with bright open clusters that appeal to beginners and old lags alike, with Messiers 52 and 103 being striking examples, as are the Owl Cluster (NGC 457) and Caroline’s Rose Cluster (NGC 7789) that rival any in the heavens. The latter is named after Caroline Herschel, sister to William, and this large, jewelled brooch is rightly a favourite. But less well-known clusters are also worth exploring. NGC 663 lies between delta and epsilon Cassiopeiae and is very lovely, its close proximity to NGC 654 adding to the spectacle. Exploring this rich region is most rewarding.

For many observers, Orion and his winter retinue will dominate. Taurus, Canis Major, Auriga, Gemini and Lepus the hare getting under his feet are all stuffed with Christmas treats, familiar and less so. Monoceros is rising in the east too, best seen mid-evening in late January. The long winter nights are just so rich!

The Sun remains quite active at the time of writing, with spectacular prominences on display for hydrogen-alpha imaging. The low altitude during winter hampers detailed views, but auroral activity may be seen from more northern latitudes as solar maximum is approached.

There are no eclipses of either the Sun or Moon during this period.

Mercury is an evening planet from mid-December but very low just after sunset, lying slightly to the north-west of Venus on Dec 29 before inferior conjunction on Jan 7, then reaching western elongation on the morning of Jan 30 but just scraping the horizon.

Venus becomes a bright evening planet as the year turns, although low in Sagittarius.

Mars is bound to be the main planet of interest as it is closest to Earth on Dec 1. It then reaches opposition on Dec 8 while high in Taurus. The suboptimal apparent disc size is well compensated for by the splendid altitude. Shining at –1.9, the Red Planet cannot be missed. In addition, Mars undergoes a lunar occultation before dawn (see the occultations table) on the night of opposition.

A regional dust storm has been developing since September and may persist or extend. Follow the excellent blog on the Mars Section pages for up-to-date information: bit.ly/3GoBtAA.

Jupiter has dominated the autumn sky and remains prominent in southern Pisces near the tail of Cetus at mid-evening. Remarkable imaging of the giant planet has been achieved during this apparition and opportunities remain until the end of January, by which time Jupiter will be dipping into the west during mid-evening.

Saturn is now low in the south-west soon after dusk and is more difficult to observe, as Earth’s atmosphere thickens towards the horizon. 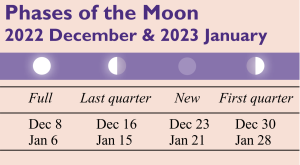 Uranus is just past opposition and well placed in Aries. A waxing gibbous Moon occults the ice giant in the early evening of Dec 5. The brilliant Moon will make observation difficult as the planet disappears on the dark northern limb; it will reappear around half an hour later on the northern bright limb. Exact timings will depend on location. If you happen to be in the Faroe Islands, you get a grazing occultation.

Neptune is to the west of Jupiter and so by the end of December is low in Aquarius. 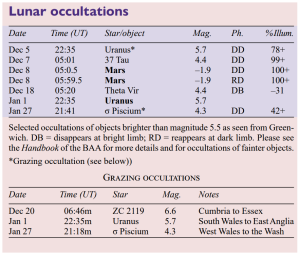 None of the four main dwarf/minor planets offer observing opportunities from the UK during this period.

The Geminids are the premier meteor shower of the year, with a zenithal hourly rate (ZHR) of 100+, and will peak before dawn of Dec 15. Unfortunately, the view will be compromised by a waning gibbous Moon near Regulus in Leo. However, the Geminids are typically slow and often bright, so observing is to be encouraged and may be enjoyed before the Moon rises too high in later evening. It is thought that they derive from the asteroid 3200 Phaethon rather than a comet.

Early in the New Year, the Quadrantids typically have a sharp peak on Jan 4 and again the Moon will be a nuisance, being two days short of full (although quite a distance away in Taurus). However, with a potential ZHR of 80+, they are still worth getting cold for. The radiant is in northern Boötes, the Mural Quadrant having been discarded as a constellation by the International Astronomical Union in 1922. The parent body is uncertain.

It is a rather barren time for comets, although C/2022 E3 (ZTF) will be well placed in the predawn sky after Christmas, moving slowly through Corona Borealis. Discovered at magnitude 17 on 2022 Mar 2, it is gradually drawing closer and getting brighter, aiming for perihelion on 2023 Jan 13 when at a distance of 1.11au from the Sun. After perihelion, it moves more swiftly through Boötes into Draco and becomes circumpolar, when it could be a binocular object all night. It lies in Camelopardalis when closest to Earth on 2023 Feb 2, at only 0.29au or 27 million miles (44 million kilometres), then moves close to Capella on 2023 Feb 5