With the summer solstice occurring on Jun 21, this time of year can be regarded as the ‘silly season’ for observers of the deep sky. Short nights, coupled with the sky being less than dark, can reduce enthusiasm while waiting until after 11 p.m. BST to start a session. Nevertheless, the situation is slowly improving for observers of the Sun and the major planets, with Saturn, Jupiter and Mars all becoming more available and our star becoming more active. In addition, the noctilucent cloud season continues in June, and potentially through July too.

Ursa Major remains high in the west, hauling the unmissably brilliant orange Arcturus into the south-west, while Virgo and her family of galaxies become increasingly difficult in the bright twilight of midsummer. To the east of Boötes lies the small constellation of the northern crown, Corona Borealis: an easily identifiable asterism centred on second-magnitude Alphecca (alpha CrB), which is a low-amplitude eclipsing binary. Sometimes known as Gemma (presumably the ‘Jewel in the Crown’), it varies between magnitude 2.21 and 2.32 over 17.36 days. Either side of Alphecca are set Nusakan (beta CrB, magnitude 3.65; a spectroscopic binary) and gamma CrB (magnitude 4.05), which is also a binary but with a challenging one-arcsecond separation between a fourth-magnitude primary and fifth-magnitude companion; both are white with an orbit of 91.2 years.

The constellation boasts two famous variable stars. R Corona Borealis, within the circlet, is a carbon-enhanced extreme helium star – one that has converted almost all its hydrogen to helium and carbon. This high carbon content makes the star ‘sooty’, and its stellar wind and pulsations cause deep fades as dust obscures the star. Two deep fades last decade were prolonged, and the star dipped to magnitude 15 (v), but it is currently back to its more normal magnitude of around 6.

T Corona Borealis is quite different: a recurrent nova found just outside the Crown, south-east of epsilon. It has had two known outbursts, rising from its quiescent 10th magnitude to +2 in 1866 and +3 in 1946. It has been brightening slightly since 2015, which could mean another outburst is on the cards – it is always worth a check when under the stars.

To Corona’s east lies Hercules, who is going head-to-head with Ophiuchus. These two large patterns dominate the southern aspect of the sky. They are the fifth and eleventh largest of the 88 constellations and fill the meridian from zenith to horizon. Many of their numerous globular clusters show high surface brightness, so are good targets in the bright high-summer skies. In Hercules, Messier 13 (the Great Hercules Cluster) is by far the best known, but Messier 92 and NGC 6229 are also well worth seeking out. While Messier 92 is very fine (even if unable to compete with M13), NGC 6229 is remote – perhaps 100,000 light-years from us. Even at this great distance, it is magnitude 9.4, although under five arcminutes in apparent diameter. 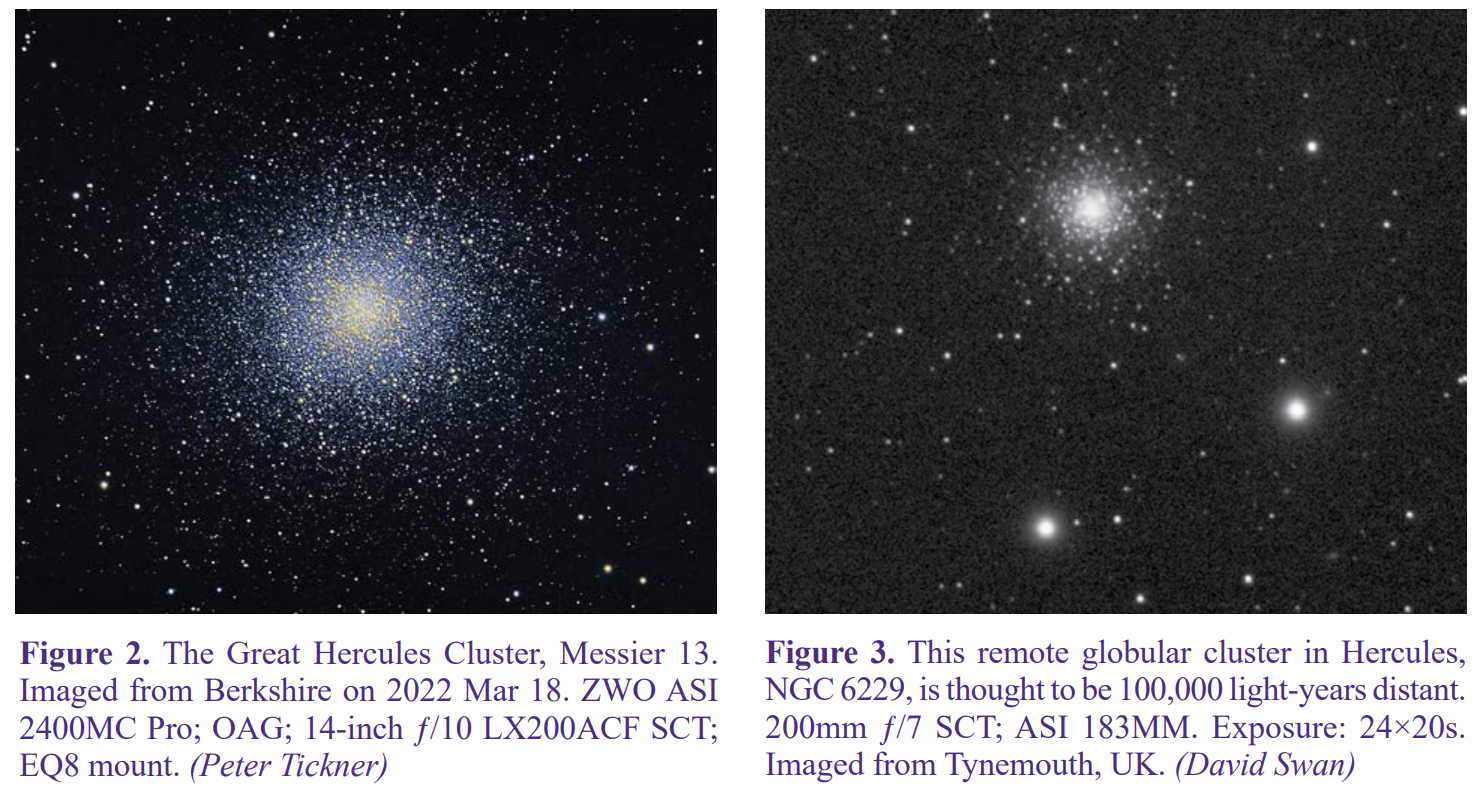 Ophiuchus has far more globulars within its boundaries as much of it dips into the Milky Way. Sixteen are brighter than magnitude 10, including its seven Messier globular clusters (Messiers 9, 10, 12, 14, 19, 62, and 107). Only Sagittarius has more. Although several are rather low down, they could provide a very manageable midsummer night’s challenge. 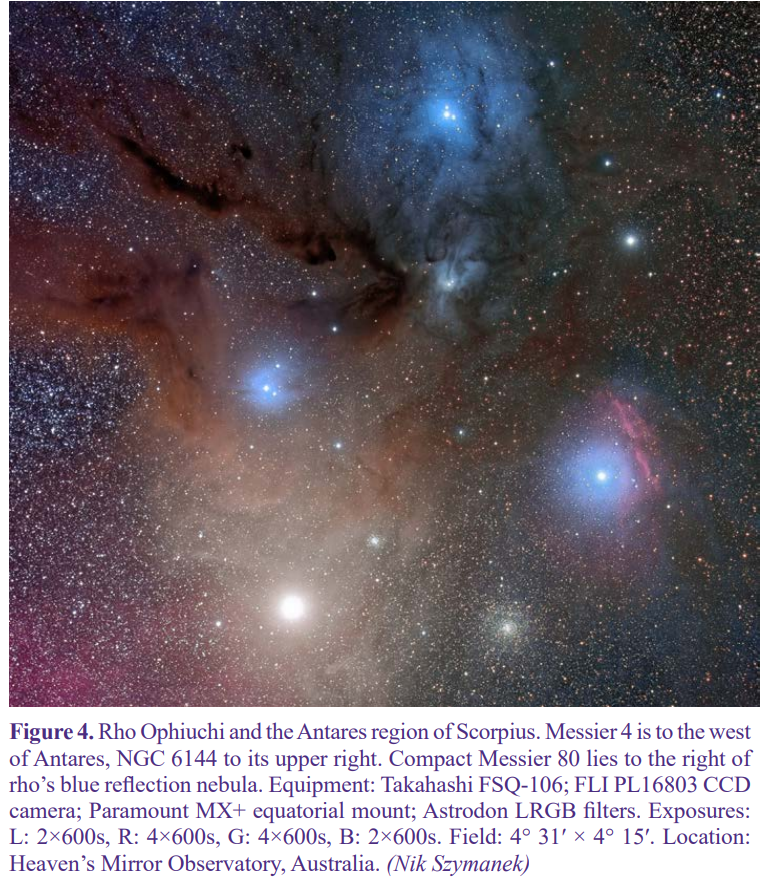 The Summer Triangle is now becoming more prominent in the east, led by the blue sapphire that is Vega, shining almost as bright as Arcturus. The distinctive pattern of the lyre is easy to make out and is compact, being only the 52nd largest of the 88 constellations. The Ring Nebula, Messier 57, remains superb for beginners and old lags alike. One modern challenge is to image the planetary nebula’s outer material, ejected in the past during the star’s asymptotic-giant-branch phase (see title image).

The other Messier object in Lyra is Messier 56: yet another fine summer globular cluster. It is in a high northern position, which counters the smaller size (eight arcminutes) and lesser magnitude (8.4) than some of its rivals.

Draco’s head lies at the zenith, while the majority of the draconian bulk coils to the north. Scraping the southern horizon is ruddy Antares, alpha Scorpii. Most of the scorpion itself is lost to us as it dips below the horizon from the UK. Antares itself is superb: a double star with a red primary and green companion. Nearby are two more contrasting globular clusters: Messier 4 and Messier 80. Messier 4 lies 1.5° west of Antares and is one of the closest globulars, at around 5,600 light-years; it is also one of the least concentrated, making it heavily studied. Messier 80 lies between Antares and Graffias (beta Scorpii) and is considerably more distant at an estimated 48,000 light-years. It is hence smaller and fainter (nine arcminutes and magnitude 7.3). It is the most compact of the Messier globulars (Shapley–Sawyer Class XI) and has many ‘blue stragglers’. It lies beyond the centre of the Milky Way, but surprisingly is not obscured by dust and gas.

As travel opportunities improve post-pandemic, perhaps more of us can enjoy the full view of this magnificent arachnid. From sites further south, the eastern Scorpion dips its sting into the Milky Way with its marvellous star fields, nebulae and clusters. These include Messiers 6 and 7, which are below the horizon from Britain but marvellous from further south. Exploring the area by naked eye, binoculars or, if possible, a rich-field telescope is a treat.

While the full Moon is a thorough nuisance to deep-sky enthusiasts in June and July, its low altitude in Sagittarius offers splendid opportunities for aesthetically pleasing photographs. 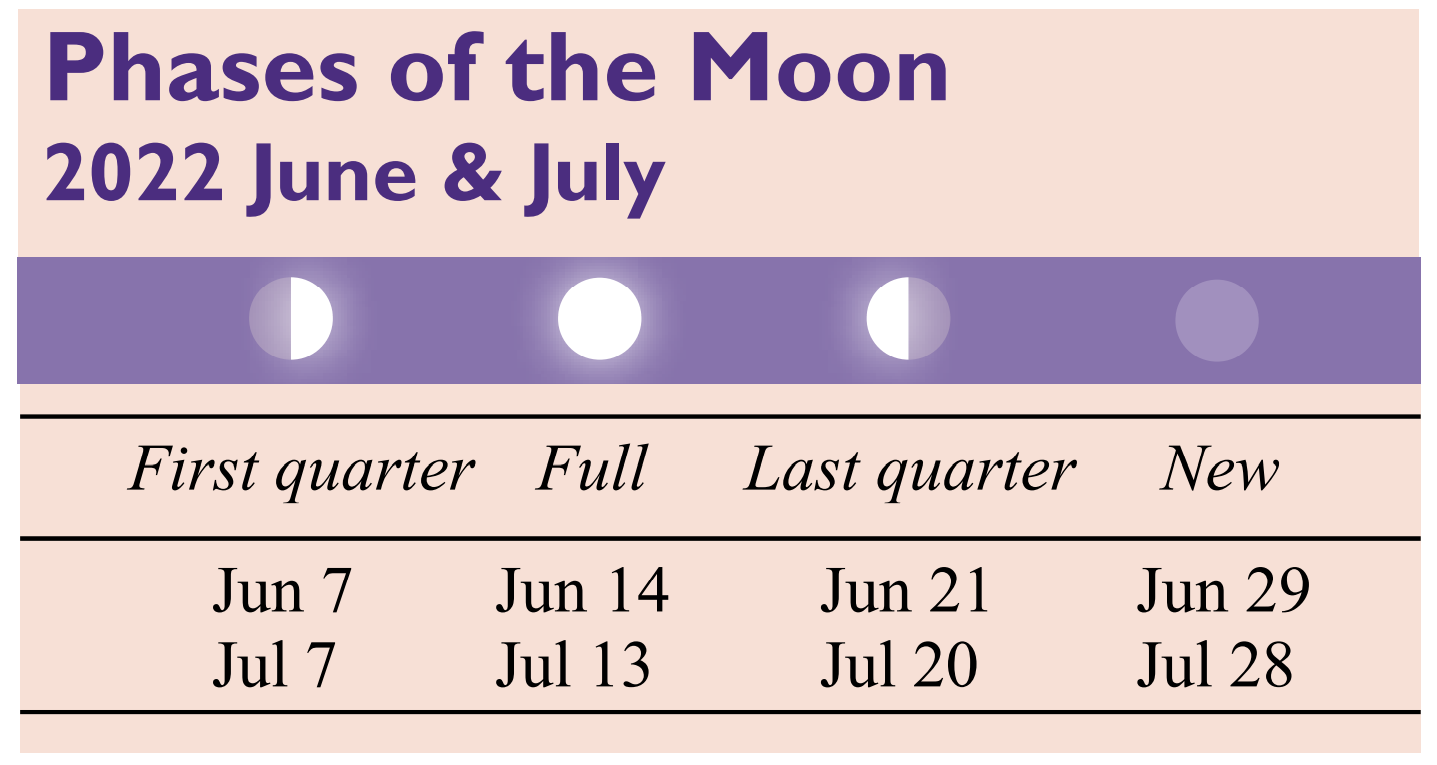 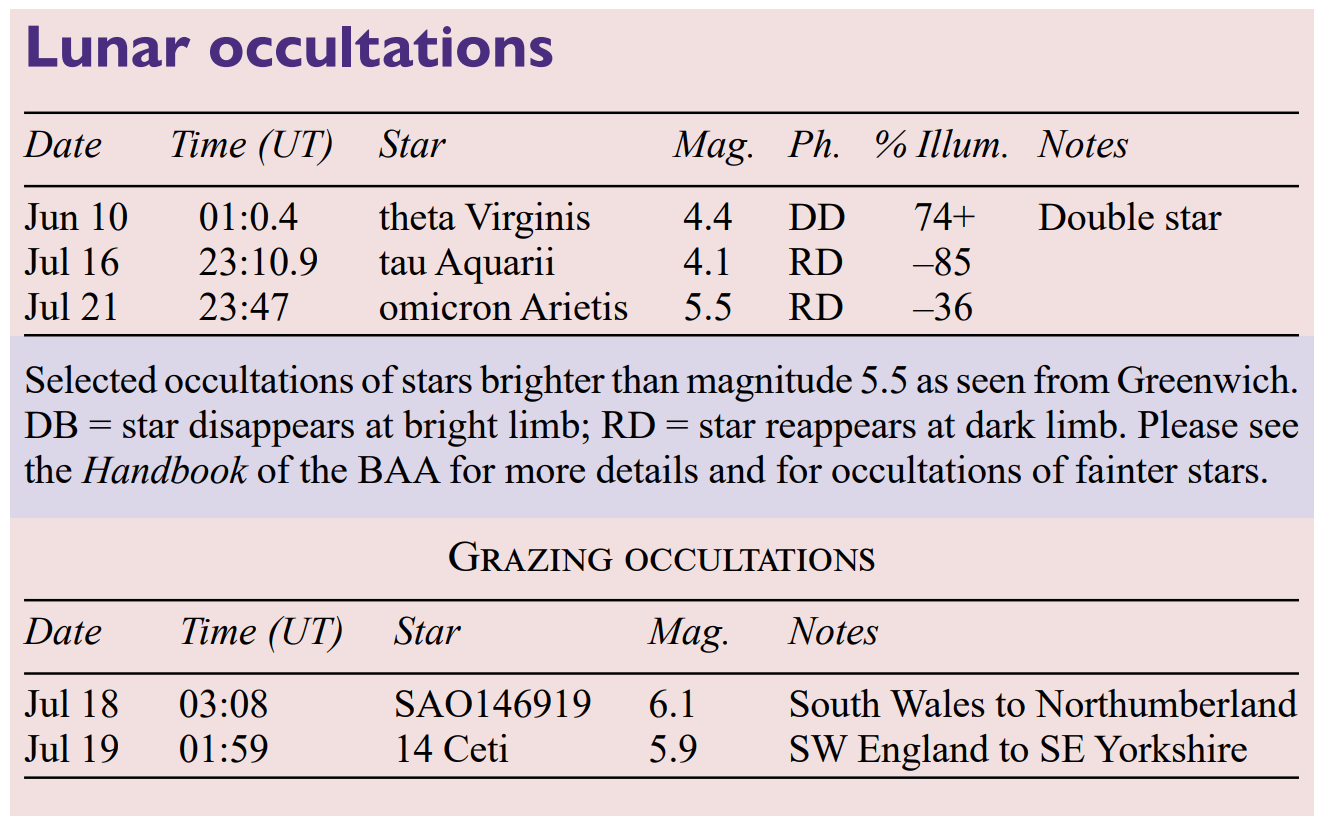 The Sun has been pleasantly active in the spring and some fine auroral displays have been enjoyed by northern observers. Several active regions have been seen, and it is likely that our local star is on course for its next maximum. With long days and the Sun being high, opportunities for solar observing improve, but caution with eyes, skin and optics remains a priority.

There are no solar or lunar eclipses during this period.

For planet observers, the long wait for good observing opportunities is almost over. Things are getting better as nights lengthen after the solstice and planets become better placed, at more sociable hours.

Mercury reaches its greatest western elongation on Jun 16 when 23.2° from the Sun, but will be disappointingly low, reaching just seven degrees above the north-eastern horizon and then plunging towards superior conjunction on Jul 16, followed by a poor evening apparition.

Venus is brilliant, but low in the predawn sky in the north-east throughout June and July.

Mars remains a morning planet but is improving, reaching magnitude +0.2 and an apparent diameter of 8.2ʺ by the end of July. It has its own solstice on Jul 21, marking the start of northern winter and southern summer. The southern-hemisphere dust-storm season may begin around this time. By the end of July, Mars will lie in the east and at some 25° in altitude, just south of Uranus.

Jupiter is also visible in the predawn sky. It is between Pisces and the tail of Cetus in early July, rising before midnight by the end of the month. In the wee hours, the great planet will be some 37° high in the south.

Saturn is best viewed in the predawn mornings, although rising just before midnight by the end of June. The ringed planet then improves in altitude as the weeks pass, being at its best for some years, lying in eastern Capricornus. The rings are slowly closing, and we shall see more of the southern hemisphere. Opposition will be on Aug 15.

Uranus is a morning planet in south-east Aries and will be slightly north of Mars at the beginning of August. Neptune is a little west of Jupiter in Pisces, rising around midnight in early June.

Pluto reaches opposition on Jul 20 in Sagittarius, at magnitude 14.3 and close to the horizon. 3 Juno is well placed before dawn, west of the Circlet of Pisces. It brightens from magnitude 10 to 9 over the two months. 4 Vesta lies east of Saturn in Aquarius, at around magnitude 6.

The June Boötids peak on Jun 27 and the Moon will be absent. Look for any enhanced activity that might occur, as in 1916 and 1998. These slow meteors derive from comet 7P/Pons–Winnecke.

The Alpha Capricornids are also Moon-free, the second-day crescent setting early on the night of their peak on Jul 30. The meteors, while infrequent, can be bright and a fireball may occasionally occur. The radius is to the west of Saturn.

Finally, the Southern Delta Aquariids may put on a show on Jul 31, again without lunar interference. It is worth looking for several days either side of maximum as there can be a steady stream, albeit not a rich one. The shower may be derived from 96P/Machholz, discovered in 1986.

C/2017 K2 (PanSTARRS) traverses Ophiuchus, going south. It will be at its closest to Earth on Jul 14 when 1.8au from us, possibly reaching 8th magnitude. 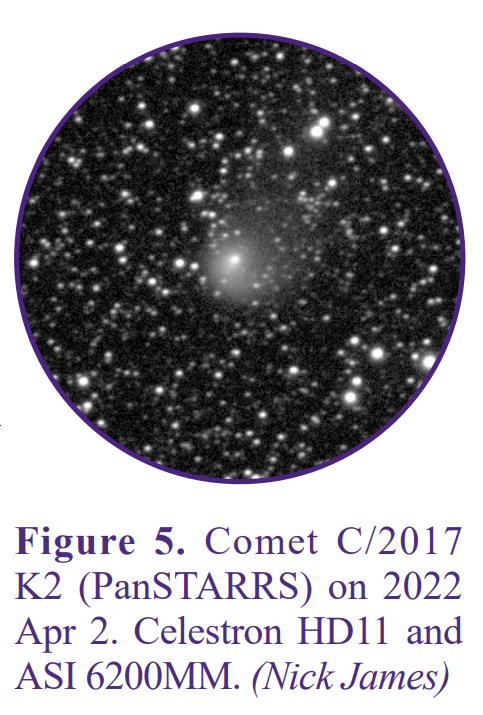 116P/Wild is a faint comet returning to perihelion on Jul 16, although it was closest to Earth on Feb 23 when at a distance of 1.43au. It is moving very slowly and will spend the spring and summer in Leo, moving into Virgo by August. The best chance to examine the comet is in early June, when it is close to Regulus, although it is not predicted to be brighter than magnitude 13. See the ‘Comet of the Month’ for March on the BAA website.