Sky Notes for February and March 2020

Our winter guide, Orion, is well past the meridian by 22:00 UT in early March, though still well placed to guide us though the late winter sky. While he slowly gives way, the winter Milky Way remains prominent in the south-west, but we begin to see the more distant Universe as the galaxies of early spring become more prominent.

To Orion’s east, the rather less than prominent unicorn is well placed and, although dim and devoid of shape, Monoceros offers magical deep-sky viewing. Exploring the many open star clusters is fun with binoculars or a small telescope, with Messier 48, NGC 2244 (the centre of the Rosette Nebula) and NGC 2264 (the Christmas Tree Cluster with the dark Cone Nebula its base) being favourites. With larger telescopes you can spot Hubble’s Variable Nebula (NGC 2261) nearby. 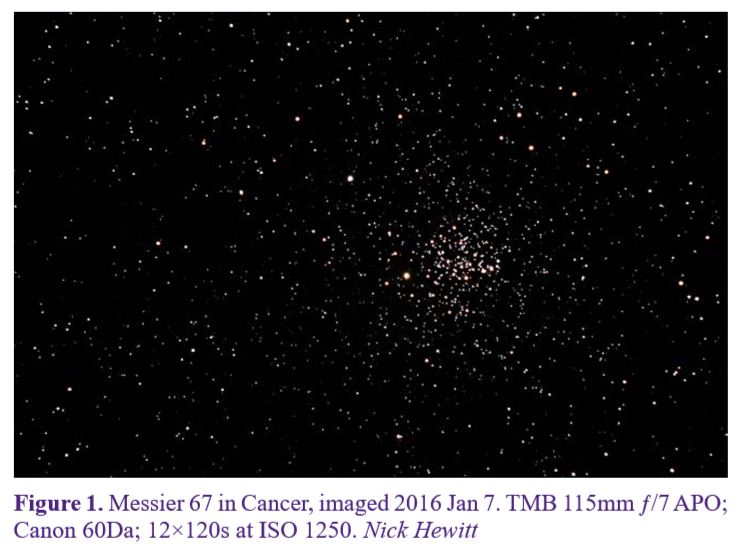 Enthusiasts of pretty multiple stars should catch beta Monocerotis, a fine triple. Although not that bright at magnitude +3.74, it is nevertheless the best that the constellation can manage, being marginally brighter than alpha. It forms a triangle with Saiph to its south-west and Sirius to the south-east. All three components are Be-type stars so look white, strung in a shallow curve with magnitudes A= +4.6, B= +5.0 and C= +5.3. B and C make a double 2.8 arcseconds apart, while A is a little wider from them at 7.4arcsec.

North of Monoceros lies Procyon, the brightest star in Canis Minor and its only real object of note; further north still lie the twins. Gemini is a splendid constellation, with its 1st-magnitude stars representing the non-identical mythological pair Castor and Pollux. Each are delineated by lines of reasonably prominent stars flowing to the west, those of Pollux to the south being rather more prominent. However, Castor’s to the north terminate in spectacular fashion with Messier 35: a superb bright open cluster that spills over half a degree.

To the unicorn’s south, we find scintillating Sirius – the brightest star in the heavens other than the Sun. It can’t be missed if the south-western aspect is clear. To the east of Sirius we have a last chance to find a small portion of the great ship Argo Navis, broken up into manageable chunks by the International Astronomical Union in 1930 (although Nicolas-Louis de Lacaille suggested doing so in 1763.) Of the wreckage, from the UK we can see only the poop (Puppis), quite low down by March but reasonably placed through February if a good southern horizon can be found (see the 2019 December Journal, Observers’ Forum, p.364–5).

To the south-east of Gemini scuttles Cancer (the crab), heralding shortening nights but also warmer weather and the hint of spring. Messier 44, the famous open cluster also known as Praesepe or the Beehive, is a good binocular target on moonless nights. The older and richer cluster Messier 67 (Figure 1) in the southern aspect of the crab is also well worth a look and nicely placed on the meridian. It is thought to be some five billion years old, so just a little older than the solar system and ancient by galactic cluster standards. 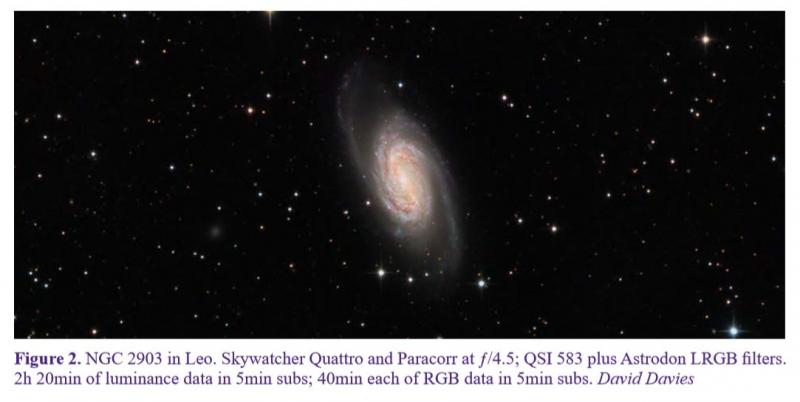 Further east still, we arrive at the prominent asterism that is the Sickle of Leo. This inverted question-mark, with 1st-magnitude Regulus at its southern extreme, leads the way for a feast of galaxies to follow. Just west of the northern part of Sickle, find NGC 2903 (Figure 2) – perhaps ‘the Harbinger of Spring’. This bright galaxy, just preceding the Sickle, is the first of thousands to occupy galaxy enthusiasts between February and May.

Other marvellous examples follow in Ursa Major, now culminating at the zenith and chasing the elusive Lynx. Seize the chance to locate the feline’s most unusual object, NGC 2419, the Intergalactic Wanderer (Figure 3). This is the most distant globular cluster gravitationally bound to the Milky Way, thought to lie 270,000 light-years from Earth, and 300,000 light-years from the galactic centre. A little north of Castor, it isn’t difficult to locate as a pair of 7th-magnitude stars gracing the field. The globular itself is a surprising magnitude +9, so it is one of the sky’s intrinsically most brilliant. 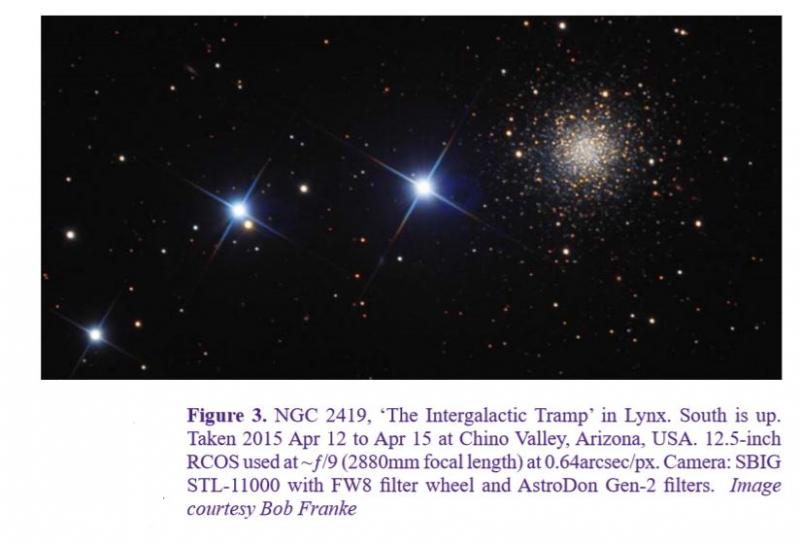 Bridging the winter and spring is Hydra. The celestial sea serpent is the largest and longest of the constellations, beginning just east of the unicorn’s rump and below the crab, but coiling south-east to terminate below Corvus and Virgo. Hydra is 100° long, covering over a quarter of the sky in right ascension. The brightest star is Alphard, the Solitary One, or Cor Hydrae (the Heart of the Sea Serpent). This orange giant is magnitude +2 and easy to spot, as few other bright stars are in the vicinity. Antlia (the air pump) is to its south-east and Sextans (the sextant) to its north-east, but neither are prominent.

The spring stars of Boötes, Canes Venatici and Virgo are rising to a reasonable altitude in the east, but unless you are observing after midnight they will be better placed in April.

It is hoped that the Sun will become more active after a period of serious quiescence. However, this may not occur yet and we must remain patient. What we can predict is that the equinox will occur on Mar 20.

There are no eclipses of either the Sun or Moon during this period. 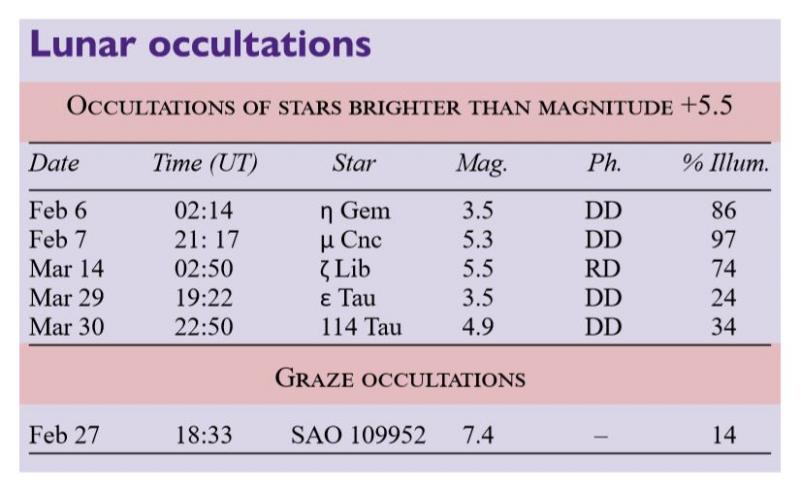 The table shows lunar occultations of stars brighter than magnitude +5.5. Times are as seen from Greenwich. More detailed information can be found in the 2020 Handbook of the British Astronomical Association. In addition, there is a good grazing occultation on Feb 27 visible from South Wales to Suffolk. See p.42–43 of the Handbook for more details.

While early February is a disappointing time for most of the planets, things will slowly improve into spring as the days lengthen. Although Mars, Jupiter and Saturn are very low in the morning sky, at the end of March there are fine groupings of them and the Moon if a very clear south-eastern horizon can be found.

On Mar 20 & 21 Mars and Jupiter have a very close conjunction, but they will be only 10° above the horizon from the Midlands (going further south helps). A few days later, Mars sits between the gas giants on the way to have a rendezvous with Saturn on Apr 1, although this will be less spectacular due to the low altitude and relative faintness of Saturn. 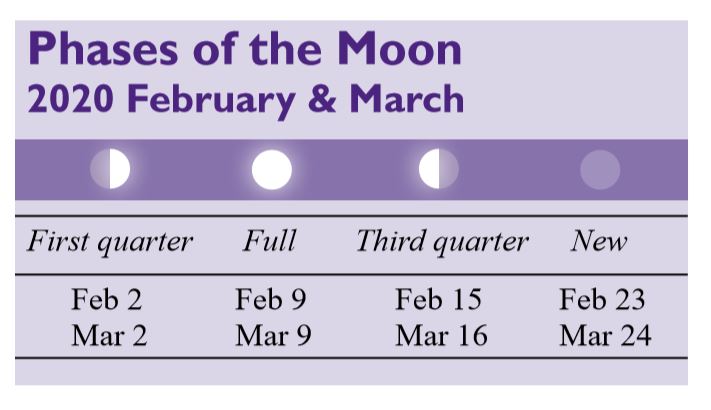 For evening observers, the inner planets give the most satisfaction. Swift Mercury makes a reasonable target early in February, speeding towards eastern elongation on Feb 10 when he achieves a manageable altitude of around 14° just after sunset. 18° east of the Sun, he will show a 7arcsec disc that will wax to 10arcsec by inferior conjunction on Feb 26. Thereafter, he will be a morning planet but desperately low at western elongation on Mar 24.

Venus begins February as a brilliant evening object in Aquarius and she will climb to become even more spectacular as she reaches an eastern elongation of 46° on Mar 24. Over 40° in altitude in north-east Aries, telescopes will show dichotomy (half phase) and Venus will be a wonderful magnitude –4.3 and 22.8arcsec. (See p. 32 for a report of the planet’s 2018–’19 elongations.)

Mars begins February in Ophiuchus as a very small disc (4.8arcsec) of magnitude +1.4 low in the morning sky, but will be a little more impressive by the end of March, growing to 6.4arcsec and brightening a little to magnitude +0.8. While avid Mars observers may have been attempting to observe for a week or two, 7arcsec is regarded as the diameter for which open season begins for most observers. He remains both low and small – a long way off the very favourable opposition due on Oct 13.

Jupiter is next up, low in Sagittarius. He also grows in apparent size from late January to the end of March. He will eventually reach 47.6arcsec by opposition on Jul 14, but begins this morning apparition at a mere 32.1arcsec in early February, swelling to 37.12 arcsec by the end of March. He remains difficult to observe; things are due to improve considerably from 2022 onwards.

Saturn, too, is on the up. After so many years at poor altitude for UK observers, he will creep into a better position year by year over the next decade. Early in 2020 though, he will not be a good target, being very low in the south-east before dawn from early March onwards.

Uranus remains in Aries, dropping low into the west and well past his best for observation. Neptune continues to creep slowly through Aquarius, lost in the late winter dusk. Pluto is essentially unobservable in Sagittarius.

This is a quiet time for enthusiasts of the brighter dwarf planets and asteroids. Three of the four original discoveries, Ceres, Pallas and Juno, are either below the horizon or very poorly placed. Vesta in Aries can be glimpsed early on in this period, and observers may be able to observe an extremely rare occultation of a naked-eye star.

The north of England is predicted to be in the zone for a rare event on 2020 Feb 11 involving 8th magnitude (4) Vesta and 5th magnitude star HIP 14439 in Aries. For more details, see p.52–53 of the Handbook of the British Astronomical Association and p.4 of this Journal.

There are no major meteor showers between February and the end of March, although a few Delta Leonids may be seen radiating from near Zosma (δ Leonis) around Feb 25. This shower is associated with comet 55P/Tempel–Tuttle and peaks when the Moon is conveniently absent. This cannot be said of the Pi Virginids, that peak as the Moon waxes in the first week of March.

The best comet of the period covered is likely to be Comet C/2017 T2 (PANSTARRS). Discovered at 20th magnitude in 2017 September when it was it was 9.3au from the Sun, it is heading for perihelion in early May and has been widely imaged through the autumn as it becomes circumpolar.

Beginning February in Perseus, not far from the Double Cluster (NGCs 869 & 884), the comet will then move into eastern Cassiopeia, travelling more slowly through the month as it heads towards Camelopardalis. It will sweep through Ursa Major in mid-summer. The brightness of C/2017 T2 is, as always, uncertain but as it moves to perihelion, it is certainly the best comet of the season.