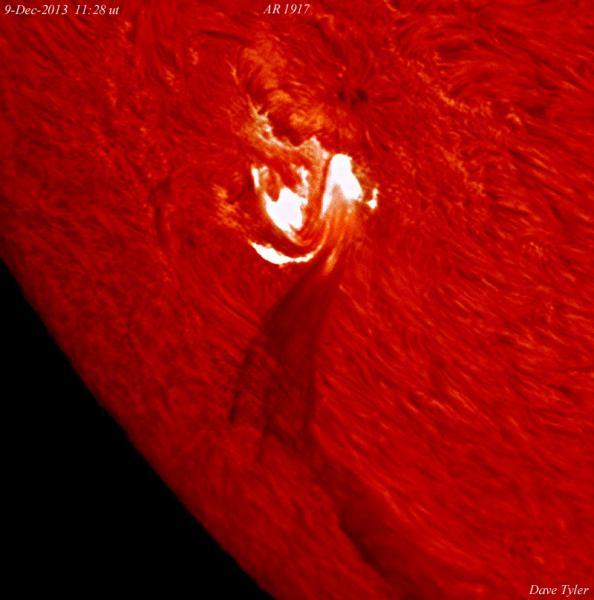 The southern hemisphere continued to outperform the northern for the eighth consecutive month. A further rise in southern sunspot groups during December contributed to an overall rise in white light solar activity for the month, resulting in the highest total MDF and R figures since 2011 November.
AR1909 S17°/205° survived on the disk from the previous month, now a complex type Eac group approaching the CM. The group comprised several penumbral sunspots, some of which were irregular in shape, with a total area of 360 millionths. By Dec 4 the group was west of the CM and decaying but still led by a substantial penumbral sunspot. By Dec 8 the group had reduced to a single Hsx sunspot near the western limb.
AR1917 S12°/076° rounded the SE limb on Dec 7 and was seen near the eastern limb the next day type Cao. The group developed to type Dao on Dec 10 and further developed to type Dac on Dec 14 with an overall area of 320 millionths. On this date it comprised several small penumbral sunspots and pores together with a larger penumbral spot to the south and middle portion of the group. On Dec 17 the group was dominated by a large central penumbral sunspot and was approaching the SW limb. It was last seen on Dec 19 as a single Hsx sunspot close to the limb. The group was reported as visible to the protected naked eye.
AR1921 N06°/042° the second group of the month reported as visible to the protected naked eye, was initially seen on Dec 10 as an irregular Hax sunspot near the NE limb. By Dec 14 it had developed into an Hkx sunspot with an area of 270 millionths. On Dec 17 the sunspot had split into two separate penumbral sunspots travelling east-west aligned and close together. They rounded the limb on Dec 21 without any further significant change.
AR1928 S15°/005° formed in the SE quadrant on Dec 16/17 and was type Dai on Dec 17 forming an oval of small penumbral sunspots and pores. By Dec 19 the group was west of the CM, showing a complex structure of type Eac. The following day the leader penumbral sunspot had grown to make the group type Ekc and give a total area of 500 millionths. Many small follower sunspots were recorded. By Dec 22, the group was of a similar size and form although there were fewer pores and the group was nearing the SW limb which it rounded on Dec 24.
AR1933 S13°/027° formed on the disk in the SW quadrant to the west of AR1928 on Dec 19. Although this group was only a small Cso type in white light, its appearance was quite spectacular in H-alpha (see report below).
AR1934 S15°/269° rounded the SE limb on Dec 20 as a small Hsx sunspot. The group showed signs of growth by Dec 21 and on Dec 23 had developed a substantial penumbral leader type Dao. The trailing spots had started to fade on Dec 25 but re-established themselves on Dec 27 becoming numerous by the next day and forming a flowing trail of sunspots behind the penumbral leader type Esi. The trailing spots started to decline again on Dec 30 and the group was rounding the limb as the month closed.
AR1936 S16°/224° emerged over the SE limb as a string of small sunspots on Dec 23. By Dec 25 the leader was a small penumbral sunspot type Cao. On Dec 26 the central spot had developed an irregular penumbra, the group being type Eai. On Dec 28 no substantial penumbral sunspots were evident, the group now a cluster of small spots but more extensive in total area. The group crossed the CM on Dec 29 and showed much detail with small penumbral and other sunspots. The group showed substantial growth on Dec 31 with several penumbral spots emerging within the central section of the group which was type Eac.