Some deep sky observing targets for the summer

Last issue I focused on the planetary nebulae Messiers 27 and 57 – and with M57 in particular it got me thinking about how under-observed the constellation of Lyra is. You might think me crazy for suggesting that Lyra is rather under observed, but beyond the Ring Nebula and epsilon Lyrae, the double double, there are still many things to see, so rather than scooting off to view objects in Cygnus or Hercules, stop for a while and take in some of the other objects.
Of course, Lyra is not a very large constellation, so there are not many objects of note, but this does not mean we should ignore them. 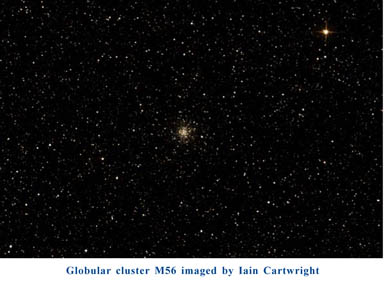 Perhaps the next ‘best’ object in Lyra is the globular cluster M56. M56 was discovered by Charles Messier in 1779. Messier did not resolve it into stars, but five years later William Herschel reported its stellar nature.
At around 8 arcminutes diameter, it is rather smaller than M13’s 20 arcminutes. It is also rather looser – classified as a X (10) in the Shapley-Sawyer concentration class scheme (which goes from I to XII). M56 is more distant too, at about 33 kly; M13 is around 25 kly. Visually it is about 8th magnitude, with the centre third of the cluster most apparent.
NGC 6702 and 6703 are the brightest galaxies to be found in Lyra, with 6703 being the brighter, at 11th magnitude, compared to 12th for 6702. Both are rather small at around 2 arcminutes, and will probably be noticed mainly as ‘fuzzy stars’. High magnification may be required to identify them. NGC 6702 is an elliptical galaxy around 62 Mpc distant, with an interesting halo of globular clusters, but these are not observable with amateur instruments. NGC 6702 is also notable for its supernova in 2002 (SN 2002cs) which was co-discovered from the UK by Mark Armstrong – it was Mark’s 38th discovery. 6703 is a spiral galaxy about 30 Mpc distant.
NGC 6745 is a rather fainter galaxy but a bit more interesting. It is an irregular galaxy and seems to actually be three galaxies colliding. It is quite small (around 1.4′) and faint (13th magnitude) making visual observation tricky, but should be available to astro-imagers. Distance estimates put it at around 200 Mly distant.
NGC 6791 is a nice open cluster. It looks a bit like a loose globular, but is a fairly tight galactic cluster with a diameter of around 16 arcminutes. It is a 9th magnitude object, which should be available to a range of instruments and observers. NGC 6791 is rather unusual as open clusters go. Its age is put at around 8 billion years, and it is metal rich, which is unusual for older stars. It is also unusual that the cluster has lasted so long, and not been dispersed. There are also three groups of stars of various ages – in addition to the 8 billion year old ones, there are groups of stars with ages 6 billion and 4 billion years. This is very strange, and makes it difficult to understand the evolution of this cluster.
In contrast there is the open cluster Stephenson 1, that you might not recognise as an open cluster. Situated around the double star Delta Lyrae, studies by Stephenson revealed many of the stars that are part of this cluster. Delta itself is a nice blue/yellow colour contrast pair, but is not a physical double. Delta 1 Lyrae is a blue/white star and Delta 2 the yellow/orange supergiant – although they are quite a distance apart some studies suggest they are both part of the cluster.
So, as the summer months come, and the hours of darkness gradually increase, linger a little longer around the constellation Lyra.