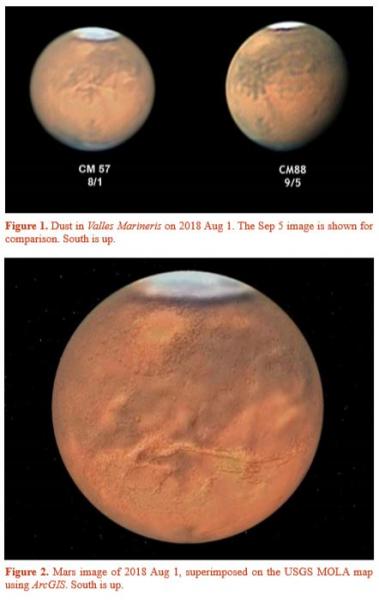 Mars was imaged during the 2018 apparition using a Celestron C8 Schmidt–Cassegrain telescope in Curaçao (E. S.) and a C14 in Houten, the Netherlands (J. S.). Since the altitude of Mars was the highest on Curaçao (54° as compared to 14° in the Netherlands), and this Caribbean island often has excellent seeing conditions, the most detailed information was collected there.

Dust in the Valles Marineris region

On 2018 Aug 1 we obtained an interesting observation. Whereas under normal conditions the eastern end of Valles Marineris can often hardly be traced, in images of that date the complex canyon system was very distinct as compared to images from Sep 5 (Figure 1). A similar phenomenon occurred during a regional storm in 2005 November.3 Our observation prompted us to study the presence of dust in the Valles Marineris region in more detail.

To correlate the albedo features in our Mars images with real three-dimensional geological structures, we have used ArcGIS.4 This Geographic Information System (GIS) software is frequently used for geospatial analysis with a wide range of applications, e.g. crime analysis, environmental studies, geology, mapping, 3-D analyses, utility companies, transportation etc. Using ArcGIS and the US Geological Survey (USGS) Mars Orbiter Laser Altimeter (MOLA) elevation data for Mars,5 albedo features in our images could be correlated with elevation and topographic features at specific sites (Figure 2). We have investigated whether there is a correlation between the accumulation of dust and the local nature of the terrain. We have also checked whether there is a preference of dust accumulation in valleys. In particular, the distribution of dust in the Valles Marineris region has been investigated (Figures 2 & 3).

By subtracting the image of 2018 Sep 6 from the image of 2018 Aug 1, a difference image is obtained in which the location of dust in the region can easily be detected (Figure 3, middle panel). Most of the dust is located in the complex canyon system, but accumulation of dust is also detected in other regions, in particular Sinai Planum (Figure 4).