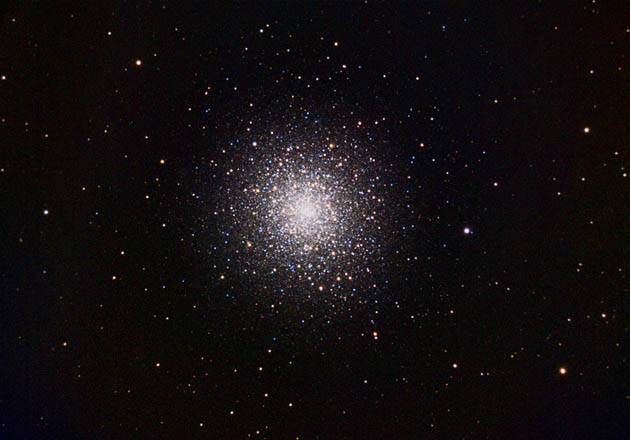 Although maybe not well known as the season for observing globular clusters, this is a good time of year to observe, with a good selection to view. Some of the standout clusters will be on show – M3, M5, M13, making a globular triangle – then add in a few more Messiers: M92, M12 and M10, and then as the night draws on M14, M56 and M71 will come into view. So, plenty to occupy the observer even before starting on New General Catalogue objects.
These glowing balls of stars have always been popular targets for amateur observers, probably mainly because they are so visually attractive, but also because they are a bit mysterious. They lie mostly in the galactic halo, in eccentric orbits around the core of our Milky Way. Their origins are not well understood; some were clearly formed in the early days of the formation of our galaxy, some are thought to be captured from interaction with passing galaxies, and some may be captured galaxies, either dwarf spheroidal types or galaxy cores. Some are amongst the oldest objects that can be seen in our galaxy, and some are very distant indeed.
The brightest globulars are easy to find even with binoculars, but for a better view a telescope and some magnification is required. There is some common ground with viewing planets and double-stars here – generally long focal length instruments will give more comfortable magnification. Since globulars consist mainly of stars, most ‘nebula’ filters will be no help at all, except for light pollution filters.
Globulars are not such popular targets for imagers these days. The short refractors often used don’t really have enough image scale, and longer focal length instruments demand more periodic error correction, tracking and guiding. But do not be put off by the challenge – I would be pleased to receive more images.
Some more challenging globulars for the observer in the next few months include NGC 2419 (‘The Intergalactic Wanderer’), NGC 4147, and NGC 5466. For those with very large telescopes, the Palomar globular clusters (see David Ratledge’s list at http://www.deep-sky.co.uk/observing/palglobs/palglobs.htm) present one of the biggest challenges.
As always, reports, sketches and images are welcomed by the Deep Sky Section – please send to the Director.