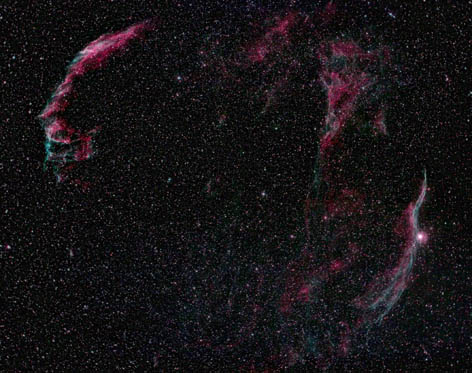 For some years the Deep Sky Section has run an observing programme on supernova remnants. During the summer months with Cygnus high in the sky, it’s an ideal time to view one of the finest such objects, known as the Cygnus Loop or perhaps more commonly the Veil Nebula. William Herschel discovered the nebula in 1784, but I have been unable to find out who coined the name ‘The Veil Nebula’, though some use the name ‘The Bridal Veil Nebula’ – I suppose alluding to the wispy nature of the loop of nebulosity.

Several NGC objects make up the Veil. The brightest portion is the eastern side, which is denoted as NGC 6992. NGC 6960 is the eastern part, often called ‘The Witches Broom’, and appears to encompass the star 52 Cygni, though this is not physically related to the nebula, being just a foreground star. Other brighter parts of the nebula include NGC 6995 and IC 1340, NGC 6974 and NGC 6979.

Currently the Cygnus Loop is thought to be about 1500 light years distant, with a diameter of around 50 light years. The supernova is thought to have exploded around 5000 to 8000 years ago. If you consult some older references, you will find further distances listed, and therefore older age. When it exploded it would have been about the brightness of the crescent Moon, and would no doubt have been a spectacular sight. We are surely due another galactic supernova, but when it will happen is impossible to predict – we will just have to wait and see.

The nebular loop has a diameter of around 3°, so a wide field is needed to capture it in its entirety. Books tend to list the apparent magnitude at around 7, suggesting it is an easy object, though for many years it was considered to be quite a tricky test. But these days it’s almost routine. Of course observing from a dark sky location at new Moon is probably the best aid to seeing it, but it can be seen visually from suburban locations.

To find it by star-hopping, I usually seek out 52 Cygni, which is naked eye visible, and from there pan round ‘the broom’ – then move north and east to track round through Pickering’s Triangle and then onto NGC 6992. It is possible to view the Veil with a small telescope, but a wide field view is recommended, and an OIII filter will help a lot. Some observers report seeing it with 10´50 binoculars in good skies. With a larger aperture telescope and some magnification, you can start to tease out many of the separate strands of nebulosity.

The Veil is a popular target for astro-imagers. The main challenge is its large physical size, so many will choose to mosaic from two or more frames. The currently popular small wide field refractors are ideal, but it will still take several nights to capture enough data for a deep image, especially if narrow band filters are used. On some images showing the entire loop, you may notice more stars inside the loop than outside. This is a real effect. The supernova has ‘blown away’ some of the interstellar dust, thus making the inside of the loop clearer, so we can see more stars there.

So, whether you have a small or large telescope, spend some time this season viewing the Veil – and send in your observations and images. In particular if you try to view with small telescopes, it would be nice to hear how small you can go.

If you are looking for a challenge, another remnant in Cygnus is the uninspiringly named G65.2 +5.7. Visible components are listed in the Stewart Sharpless 1959 catalogue: SH2-91, SH2-94, and SH2-96. It is about 3000 light years distant and 230 light years in diameter, and is thought to be around 20,000 years old. Most emission seems to be in HII though there is some OIII, so experimenting with UHC and OIII filters would be interesting. SH2-91 is the brightest part, but there are few visual observations recorded (perhaps Owen Brazell has been the only BAA observer) – a large telescope (400mm or more, perhaps) and good skies are needed.

There are images on the internet, but none in the Section archive: it should be within reach of our imagers, so here is a new challenge.

Image: Mosaic of the Western Veil by Mike Glenny