If you are a variable star observer, you would have to be a hermit not to have heard that something has been happening to Betelgeuse. The Internet bubbled with excitement at the news of this ‘unprecedented event’, suggesting that Betelgeuse may be about to explode. For the first time that the author can recall, newspapers like The New York Times have been covering news of a variable star. The author has even had colleagues asking excitedly over lunch: ‘have you heard the news about Betelgeuse?’ Many people who would normally never look at a variable star have been tempted to make estimates, to the extent that almost 10% of the data in the American Association of Variable Star Observers (AAVSO) archive for this star, which extends back to 1894, have been obtained in the last six months. (As a point of comparison, for chi Cyg, which is one of the most heavily observed stars in the AAVSO archive, just 0.3% of the data are from the same period, which includes a light curve maximum.)

The interest is mainly due to the fact that Betelgeuse is no ordinary star. It is very massive, very large and very unstable. However, there is a lot of uncertainty about how large and how massive it is because the distance is quite uncertain, and there is even more uncertainty about when its end-of-life crisis will arrive. The stories of imminent explosion seem to be due to a 2009 study that measured the diameter of Betelgeuse in the infrared to be about 43 milliarcseconds (mas), quite a lot smaller than previously accepted values of around 56mas. This led to a popular belief that the star is shrinking rapidly, which would be the prelude to a supernova explosion. In reality, Betelgeuse is pulsating, so its diameter changes with time. There is also no well-defined edge to the star and the size varies according to the wavelength at which it is observed. Similarly, any large structures on the surface will also modify diameter estimates, as will the presence of recently expelled shells of warm dust. 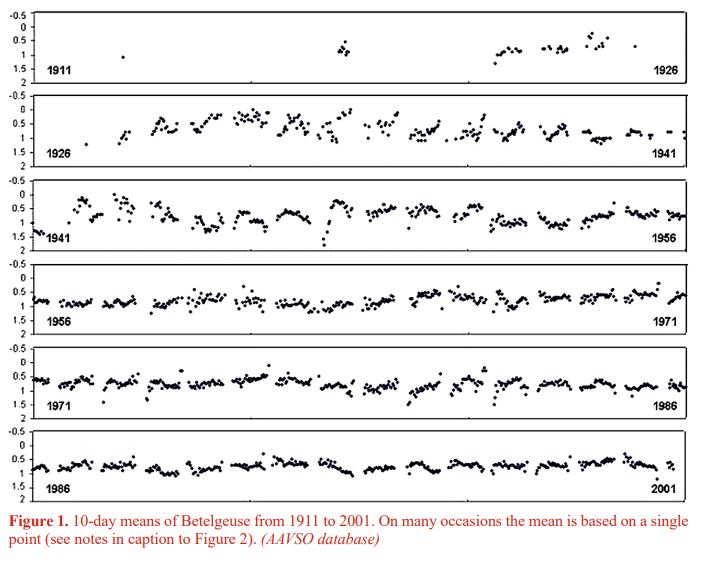 For many years, a value of 520 light-years was given for the distance of Betelgeuse. It is the value quoted in my childhood ‘bible’, The Observer’s Book of Astronomy.1 This inconveniently put Betelgeuse just slightly out of range of the traditional method of calculating stellar distances: measuring the parallax from the surface of the Earth.

In the 1990s, ESA’s Hipparcos mission measured the parallax of Betelgeuse from space, giving a rather smaller distance of 430 light-years. Hipparcos was a game-changer in stellar dynamics, although its data are not without issues. This distance came with an error of around 20%, meaning that there was a one-in-three chance that the true distance was not even in the range of 350–510 light-years.2 This, in turn, led to an uncertainty of a factor of more than two in the calculated luminosity of the star, which causes uncertainty in its estimated mass, which causes uncertainty in its future evolution… and so on. A later reworking of the Hipparcos data gave a best value of 520 light-years, with a likely range from 450–590 light-years.3

Hipparcos has now been replaced by Gaia, which will soon release its DR3 catalogue, leading to keen anticipation that it could resolve the issue of the distance to Betelgeuse once and for all. Unfortunately, Gaia was designed to measure stars down to magnitude +20, not naked-eye visible stars, which are massively saturated on its detectors. Quite some effort has been expended by the Gaia team to find ways of measuring bright, saturated stars, but these techniques are only valid up to magnitude +3. Even at the faintest magnitude at which it has ever been recorded, Betelgeuse would be far too bright to measure with Gaia: it has been observed, but in a special observing mode that requires non-standard data processing and would necessitate several months of dedicated attention to make publishable.

In other words, modern techniques of observation can, at present, tell us no more than the fact that Betelgeuse is probably at a distance somewhere between 450 and 830 light-years. It may not even be the closest supernova candidate, as Antares is at a similar distance, is of almost identical spectral type and has a similar estimated mass, but receives much less attention.

As an M2Iab star, Betelgeuse is a massive red supergiant, generally accepted to be in the mass range 10–20 solar masses (M⊙), with a lifetime of around 10 million years, although values as low as 6M⊙ and as high as 30M⊙ have been suggested. We do know that Betelgeuse must be smaller than 40M⊙, because such stars never become red supergiants, but rather strip their outer layers and become blue supergiants such as Sanduleak –69 202, precursor of SN 1987a.

Being a red supergiant, we know that Betelgeuse is at least in the helium-burning phase of its lifetime, but we have no way of knowing how far along it is. The next stage of its evolution is linked to what is going on in the star. Right now, the interior contains a series of shells, rather like a very thick onion. As we dive beneath the photosphere to the heart of the star, we find, first, a very tenuous outer layer of hydrogen and, far below it, a layer in which the temperature (around 15 million kelvin) and pressure (the gas is compressed until it is five times as dense as water) are great enough for hydrogen to be combined to form helium. Hotter and deeper still, we find another layer in which helium is being combined into carbon.

Betelgeuse has probably gone no further than that so far, although we can only argue this statistically for reasons that will become obvious a little further on. At some time in the future, Betelgeuse will suffer the fate of all the most massive stars and develop, if only briefly, a full, seven-layer onion structure. When this happens, as we continue down, each layer will be even hotter and denser than the previous one. After the carbon layer, a layer will form in which carbon combines to form neon, at a temperature of 600 million kelvin and four million times the density of water. Then, inside that, there will be one where neon combines to form oxygen and, next, a shell in which oxygen combines to form silicon at 1.5 billion kelvin. Finally, we will reach the innermost two: one in which silicon combines to form iron and, in the very heart of the star, a nucleus of iron. There are no nuclear reactions that emit energy from combining iron into even heavier elements: every further reaction consumes the star’s energy rather than producing more. In other words, Betelgeuse is not only passing through an end-of-life crisis, it is suffering from ‘heart problems’ that will soon become mortal.

Given that the hydrogen-burning stage of a 20M⊙ star lasts about 8–10 million years, helium-burning about 500–600 thousand years, carbon-burning only about 1,000 years, oxygen-burning less than a year and silicon-burning a day or less, it is far more probable that Betelgeuse is still in the helium-burning phase than one of the later ones. Probably it is 80–90% through this phase but, if the lower mass estimates are correct, it could be that Betelgeuse is even further from being a supernova.

Because of the wide uncertainty in the mass, Betelgeuse is not even necessarily going to become a supernova. To give an example of the problem that we face, we can contrast three modern estimates of the mass: the first from fits to theoretical stellar evolution, the second from estimating the surface gravity from spectral line profiles and the third from the H-alpha line profile. The first gives a mass of 19–23M⊙,6 the second a range from 7.7–16.6M⊙7 (with a most likely value of 11.6M⊙) and the third an estimate of approximately 9.5M⊙.8