The 150th anniversary of the Melbourne Observatory 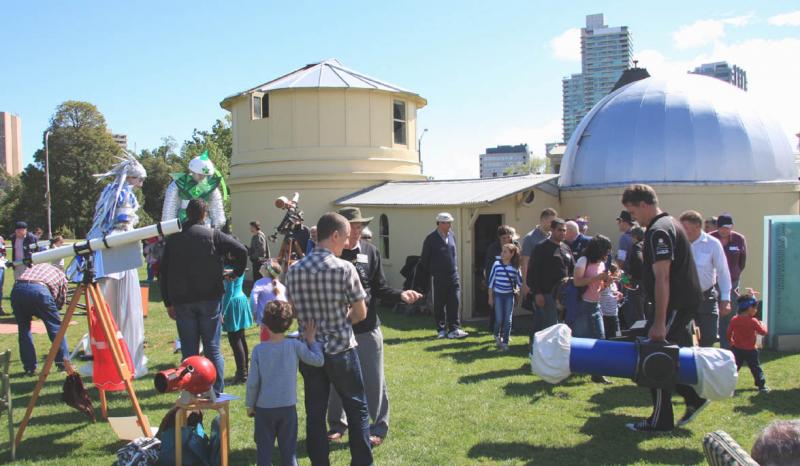 On the weekend of 2013 November 23-24, festivities were held at Melbourne Observatory to celebrate its 150th anniversary. A historical re-enactment was performed with many people dressed in period costume. Speeches based on contemporary records were delivered with appearances by the Governor of Victoria at that time, Sir Henry Barkly, and the first Government Astronomer, Robert Ellery (Figure 1). The event was hosted by the Royal Botanic Gardens and the Astronomical Society of Victoria (ASV) and fronted by the author and astronomy lecturer, Prof Fred Watson of the Australian Astronomical Observatory. I happened to be visiting Melbourne and so went along on the Saturday to witness something of the spectacle and to meet some of our further-flung BAA members, especially friends Barry Adcock and Barry Clark.

It should be remembered that by the time of the founding of the BAA in 1890, Melbourne had grown to become the second largest city in the British Empire numbering some 490,000 inhabitants, and remained Australia’s capital until 1927. Almost from the outset, the Observatory was a vital part of Melbourne’s development and contributed to the smooth running of industries ranging from shipping to farming, from city business to politics. The observatory is famous for the Great Melbourne Telescope, which remained the world’s largest equatorial-mounted reflecting telescope from its commissioning in 1869 through to 1889. Robert Lewis John Ellery held the post of Government Astronomer from 1860 to 1895. By the 1870s, he and his staff had established intricate timing instruments, kept accurate by observations of stars crossing the meridian, and transmitted accurate time by telegraphic wire to city time balls, clocks, railway stations and ships. Ellery was one of the early members of the BAA having been elected on 1892 February 24.

The South Equatorial and Photoheliograph houses were constructed in 1874 primarily to enable observations of the forthcoming Transit of Venus of 1874 Dec 09. Thanks to some key members of the ASV, the original instruments have been conserved as part of Australia’s astronomical heritage. Much of the thanks for this belong with Dr Barry Clark, who joined the BAA more than 55 years ago and who in particular has played an important part in saving the unique 4″ [101mm] Dallmeyer photoheliograph.1 On the day, several ASV members assembled small telescopes alongside the two observatory buildings (Figure 2) so that the public were able to observe the planet Venus, which was high in the daytime sky. Guided tours were held at frequent intervals for people to view the South Equatorial 8″ refractor made by Troughton & Simms, together with the original automated punched tape timing equipment and synchronising pendulum clock still in working order, as well as the photoheliograph (Figure 3).