The 2012 solar transit of Venus 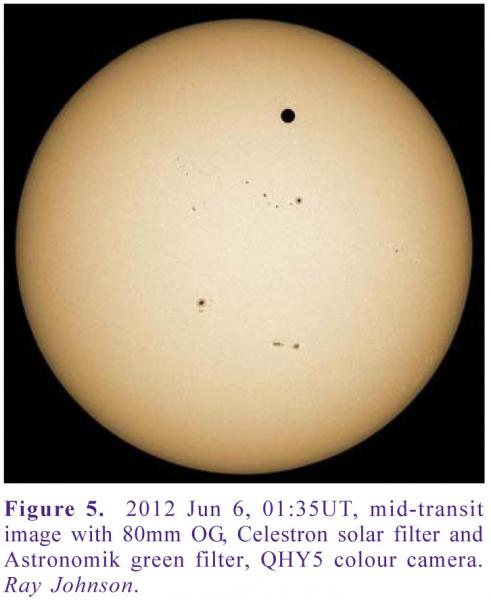 Introduction
The 2004 transit of Venus was very well observed from the UK, as was the 2016 transit of Mercury. However, the UK weather was most unkind to observers of the 2012 Jun 5-6 transit of Venus, with the result that few observers succeeded in viewing both transits of the planet, eight years apart. Only the end of the event was visible from the UK, but we have received a number of reports from overseas observers who could view the start of the event or the entire spectacle. In the USA in particular many interesting observations were secured: it will be recalled that US observers could not see the 2004 event. Observers of the 2012 transit are listed in Table 1.

Transits of Mercury go unnoticed with the naked eye, but those of Venus can be seen without optical aid if the Sun is sufficiently dimmed by cloud. The latter therefore excite much more widespread interest than those of Mercury, even from unexpected quarters. Peter Macdonald usefully summarised the circumstances of the 2012 event, and a BAA Transit webpage was set up to allow our members to post images online. Details also appeared in the BAA Handbook. An interim report was published by the Director, many observations appeared in popular magazines, and Paul Abel described the observations made with Sir Patrick Moore at Selsey. Another transit website was set up by Steven van Roode, while NASA and the Keck Observatory offered live video of the event.

The observations
The UK weather on transit day in 2012 was generally dismal, and the majority of BAA members were clouded out. There were small pockets of clear sky over southern England, and although few UK members saw much, some could snatch useful images from the few minutes allowed to them. Fortunately we received numerous reports from abroad. See Table 1. In 2004 the observations sent to us were limited to white light or Hydrogen alpha views. In 2012 some observers were also able to obtain excellent images in the wavelength of Calcium K. Figures 1-15 present some results.

Solar activity
The Solar Section counted seven Active Areas on Jun 5 and 6, all being small sunspot groups or individual spots: a typical level of activity for 2012.

Ingress
The most interesting work came from P. Tanga and colleagues at the Lowell Observatory, where by means of a focal coronograph they obtained an excellent series of images (and drawings) showing the ring of light visible around the planet just before 1st contact and until 2nd contact. In particular a brighter and wider part near the N. pole was noted (Figures 1-2). The Black Drop effect was not a particular problem to those making timings. As we explained in 2004, this is due more to inadequate resolution than to poor seeing, though unsteady air can exacerbate it. It can be seen at ingress in Figures 3 and 4.

Mid-transit
As in 2004 and earlier events, the presence of the dense atmosphere of the planet led to a slightly lighter area around the sharply defined black disk of the planet against the solar photosphere, which brightened up appreciably when closer to the darker limb of the Sun. The highest resolution images show it well, being just a few pixels wide where the solar granulation was blurred and distorted (Figure 11). Over-sharpened images showed a spurious white ring near mid-transit.

As mentioned earlier, Venus was visible to the naked eye with suitable filtration.

Egress
At last there was a chance of some observations from the UK and Europe: our observers were able to catch the last moments of the event, often through cloud. The events at ingress were repeated in reverse order.

Frassati was able to obtain a good sequence of egress drawings in both 2004 and 2012. See Figure 10 for the 2012 series. Colombo at 04:45:48 UT, between 3rd and 4th contact, could also see the whole disk of the planet faintly outlined, betraying the presence of the atmospheric ring.

Timings
A number of observers obtained timings, and the more precise ones we gather in Table 2. All timings were made in white light unless otherwise stated. As usual the event was longer when viewed in H-alpha owing to the extra thickness of the chromosphere.

Gianluigi Adamoli, Verona, Italy
‘All sunspots were far lesser in size than the planet and quite fuzzier.’ A much longer extract of Gianluigi’s observations featured in the interim report.

Tomio Akutsu, Cebu City, Philippines
Akutsu obtained the clearest close-up image of the planet upon mid-disk, given here in Figure 11, and had a good series of third contact images. He also imaged a very weak atmospheric ring, visible at just after 3rd contact…(continued…)