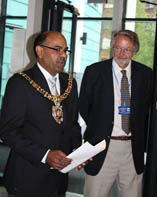 At 10 o’clock, with everything in place and a large number of visitors already in attendance, the President, Professor Bill Leatherbarrow, introduced Councillor Naeem ul Hassan, Lord Mayor of Manchester, who delivered his opening address:

‘Ladies and gentlemen, good morning, and welcome to our wonderful city of Manchester. I am delighted to have been invited this morning to officially open the British Astronomical Association’s Exhibition. The Association was forme 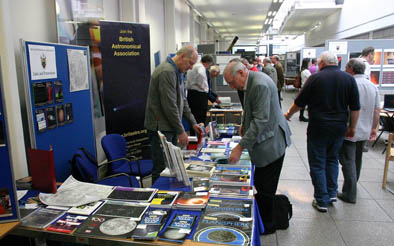 d in 1890, and is the foremost amateur astronomical organisation in the UK, with an international membership in thirty-eight countries. The Exhibition today is open to the Members and the general public, and there is much to see, giving you the opportunity to learn more about the work of the BAA.

For those of you visiting our city for the first time to attend the Exhibition, I do hope you have the opportunity to explore our vibrant and multicultural city and all it has to offer. It is a centre for trade and commerce, a centre for communication and media, and a focus of finance, higher education, the arts, and world-class sport. And for those of you who have the stamina, the city is a centre for non-stop night-life, with bars and cafés, lively restaurants, music, entertainment, and so much more. I am delighted to declare this Exhibition open.’

Mrs Hazel McGee, Editor, presented the Lord Mayor with the latest volume of the BAA Journal, and the President then accompanied him around the exhibits over the following hour or so.

Fifteen short (10-minute) talks on the work of the Sections, spaced equally throughout the day, and presented by Directors or their representatives in the lecture theatre, all attracted a substantial and varied audience; while Tony Cross, Barry Henshall, Kevin Kilburn and other members of Manchester Astronomical Society took more than a hundred visitors, in several parties, along the road to the Godlee Observatory.

Shortly after 4 o’clock, a lecture entitled ‘The Origin of the Universe’ was presented by Sir Arnold Wolfendale, 14th Astronomer Royal and Professor Emeritus at Durham University. This was delivered with appropriate balance – not too technical and with numerous anecdotes – and was enjoyed by a large audience.

At the end of the day, those who were last to leave were able to indulge in a share of the Exhibition cake emblazoned with the Association’s coat of arms, which had been prepared specially for the occasion.

Throughout the day, visitors were constantly on the move, and although many were dispersed in the lecture theatre, in the cafeteria, and at the Godlee Observatory, the main area with all the exhibits was always busy. More than a few of the visitors had heard the announcement of the Exhibition on BBC Radio Manchester, and in addition, at about 1 o’clock a camera crew appeared, and visitors throughout the afternoon included local people who had seen the television broadcast. It is apparent that the Exhibition was attended by several hundred people of all ages.

I would like to thank all exhibitors and speakers, the staff at Manchester Metropolitan University, and, of course, the visitors, for their contributions, support, and enthusiasm, resulting in a most successful and enjoyable BAA Exhibition.