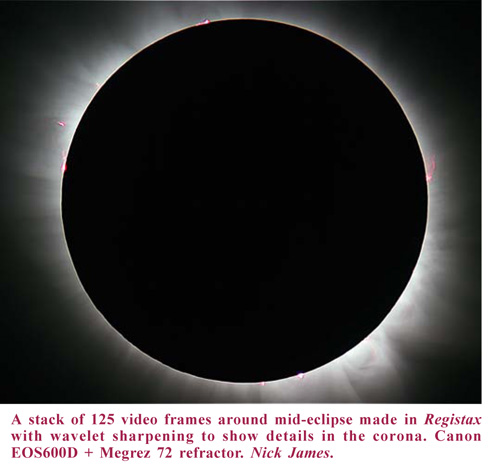 The track of totality for the March 20 eclipse ran up the North Atlantic between Iceland and the Hebrides, crossing land in two places only, the Faroe Islands and Svalbard (Spitsbergen). I had not intended to travel to this eclipse – with the weather prospects poor and the organised expeditions and cruises taking from 10 days to two weeks away it was not a practical option. But a few weeks before the event Sirius Travel (Colorado, USA) offered spare seats on their charter flight from Oslo to Svalbard, flying out on the early morning of eclipse day and returning the same afternoon, which was irresistible for my husband and myself, and also for Nick James, who carried three separate sets of equipment to take the photographs shown here.
At 78°N Svalbard is well within the Arctic Circle. (The archipelago is Svalbard, a district of Norway, and the main island is Spitsbergen, which is also the old name for the whole group). At totality the Sun would be only 11° above the mean horizon, and investigation showed that large parts of the capital, Longyearbyen, would be shadowed by mountains at this time, so even more care than usual was needed in choosing an observing site….

(Login or click above to view the full article & photos)